BEIJING (Reuters) - China’s Hubei province, at the epicentre of an outbreak of the new coronavirus, had 317 new cases of the virus as of midday (0400 GMT) on Thursday, the province’s Communist Party boss Jiang Chaoliang told a news conference.

HEAD OF HEALTH AUTHORITY AT HUANGGANG CITY, NEAR EPICENTRE OF CORONAVIRUS OUTBREAK IN CHINA, DISMISSED -STATEMENT

we should keep these people in other capacities with their knowledge, not dismiss/lock them up.. atleast not straight away

FOR MORE THAN a month, India has been awash with protests. Triggered by the December 12 passage of the highly contentious Citizenship Amendment Act, hundreds of thousands of people, many of them students, have taken to the streets

originally posted by: johnb
a reply to: CrazeeWorld777

FOR MORE THAN a month, India has been awash with protests. Triggered by the December 12 passage of the highly contentious Citizenship Amendment Act, hundreds of thousands of people, many of them students, have taken to the streets


Doesn't look good at all.

Hubei province, at the epicentre of an outbreak of the new coronavirus, had 317 new cases of the virus as of midday (0400 GMT)

and 317 - that seems suspicious.. unless they stopped testing people or they've finished a backlog in the last few days?


originally posted by: jedi_hamster
a reply to: texasgirl

except that 1/4 of the society that are total morons?

I wouldn't say morons. Just uninformed. The mainstream news isn't exactly crying wolf over this and the WHO is praising China over being transparent.

anyone who is an adult and believes mainstream news while having access to the internet, isn't exactly bright.

when people are too lazy to think for themselves, morons is what you call them.

You are entitled to your opinion. Most of my friends are so busy with working and raising their kids that they're too tired at the end of the day to do any research. But I'm working on informing them, without sounding like a nutty conspiracy theorist.

don't get me wrong, everyone can say "i know nothing", it's fair and humble thing to do. life is life.

i just have a problem with people not thinking for themselves, then sharing "their" opinion with the world, often in the most aggressive and loud way possible. those blindly believing mainstream media obviously didn't do their own research, so they don't think for themselves - as a result, they shouldn't voice "their" opinion, vote and so on, imho. otherwise all you're getting is a bunch of people repeating whatever the media tells them to repeat. combine that with politics and you know exactly how that turns out.

but to clarify my previous post, lets just say that "internet access" means "having the access and time to utilize it for your own research". if one doesn't have time, bummer. as long as he's not defending views that aren't even his own without thinking about it, it's fine. but lets end it here, it went offtopic enough.

posted on Jan, 30 2020 @ 08:29 AM
link
Interesting article about 30 viruses, previously unknown to man, discovered in 15,000 year old ice on a Central Asian mountain top and the theory that melting could release them.

Glucose is a sugar, there is a whole range of sugars depending on the chain length, some we can’t even digest as the chains get into longer length polysaccharides like cellulose.

Insulin controls blood sugar or blood glucose along with glucagon, when that gets out of control by ether an autoimmune condition like Type 1 Diabetes or an insulin resistance condition like gestational diabetes or type 2 diabetes. People get sick because it lowers the pH of blood, increases chance of infection, alters mental status and cells think they are starving because insulin or the key that lets glucose enter the cells or the sugar they primarily run on is not present or they do not respond to it anymore because of poor diet and lifestyle. Waste builds up and they can go into shock or ketoacidosis. Everything we eat is broken down into glucose or sugar for fuel, everything else is just construction material.

Researchers at #Lancaster University estimate that only 5.1% of #Coronavirus infections in #Wuhan have been identified.

Police have been called out by China’s top court over the harsh punishment given to those thought to be spreading rumours about the coronavirus.

The country’s Supreme Court has now lashed out at the police over the incident, with judge Tang Xinghua saying while the information might not have been accurate, the people involved did not deserve to be punished.
“If the public had believed these ‘rumours’ at the time, and carried out measures like wearing masks, strictly disinfecting and avoiding wildlife markets … it might have been a good thing,” he said in an article published to the Supreme Court’s social media account.

7,000 people are quarantined on a cruise ship off Italy as Chinese couple on board are tested for coronavirus

Thailand leads world in cases outside China at 14.

posted on Jan, 30 2020 @ 08:40 AM
link
On the source link at bho, there is a press conference transcript that was held today. They only talked of numbers through the 28th. Two things I noticed were a little over 32,000 out patients, and that their top 3 hospitals were not able to do testing at that point.

posted on Jan, 30 2020 @ 08:42 AM
link
I find it interesting that we have not heard many first hand reports from foreign nationals that have been exiting China recently. We had that one guy yesterday coming back from South Africa and he was quoted as saying that there were people 'dying like flies' over there.
Aren't the news reporters interviewing the people that are coming back from China... or what?

posted on Jan, 30 2020 @ 08:43 AM
link
Spain is going to host a soccer match against the Wuhan team. They've said that they have "confirmed" that they do not have the virus.

This is how humanity ends? Not only stupid people eating raw bats/developing bioweapons, but also governments unable to act with some common sense around the world?

Looks like they’re facing some serious strain and internal disagreement problems. I hope they change for the better, too bad they could just equate any purging to CoV complications or civil unrest. They could be moving to make scapegoats out of a few people to improve their image.

originally posted by: butcherguy
I find it interesting that we have not heard many first hand reports from foreign nationals that have been exiting China recently. We had that one guy yesterday coming back from South Africa and he was quoted as saying that there were people 'dying like flies' over there.
Aren't the news reporters interviewing the people that are coming back from China... or what?

I don't want to hear from them, because that would mean that those people are not being quarantined. Which they should!
edit on 30-1-2020 by Hellas because: (no reason given)

posted on Jan, 30 2020 @ 08:45 AM
link
When I went with my husband to Shanghai, I visit a "wet market". I have been ALL over the world and had never seen anything like that before: fish of all kinds, some I had NEVER seen before....eels (one "bucket" of them was squirming and this snake like thing....right out of a horror movie....poked its head up out of the water....wild! The smell was very pungent and there was all kinds of "guts" all over the floor of the market: blood, water and gore from the killing of these live animals to give to the purchaser. I ALMOST threw out my shoes I wore to that market because of what was all over the floor.....I was in China a week....and when I left, I caught some kind of bug...I had not been that sick in a long time! I never found out what it was because we had to return to the states because my husband's mother had a massive heart attack......I was not able to visit her in the hospital because of whatever virus I had picked up in China. This was in 2018.


originally posted by: WeAllWait
Good god, data lovers rejoice.
SCMP has compiled an impressive page with all sorts of graphs and representations for many different subjects regarding the outbreak.


The most satisfying analytic based visit of them all. 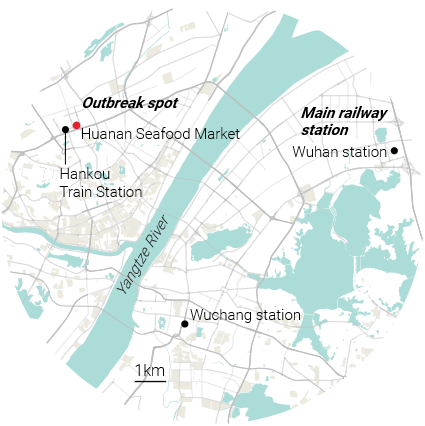 Here are some things you can supposedly purchase in a market like the one mentioned :


Spain is going to host a soccer match against the Wuhan team. They've said that they have "confirmed" that they do not have the virus.

At least 100 years ago Spain was honest about that influenza and the rest of the world tried to hide it while it was happening they never had the internet like today. Because they were honest about people getting sick it got called the "Spanish Flu"