page: 1
29
<<   2 >>
log in
join
share:
jadedANDcynical
+6 more
posted on May, 23 2017 @ 03:49 PM
link
Unless you're like Patrick from Sponge Bob and have been living under a rock, you've heard of Seth Rich and the idea that he was the source of the DNC Wikileaks. For those that don't know, Seth Rich worked for the DNC in the office of 'voter expansion' and was murdered in 2016.

In the wee hours of July 10th, Seth was on the phone with his girlfriend after having visited one if his usual haunts, Lou's City Bar, when an audible ruckus caused his girlfriend to ask if everything was ok. Seth answered that there was nothing to worry about but he had to go.

Very shortly thereafter, Seth was shot in the back twice in what has been reported as a 'robbery gone wrong,' even though there was still several items of value on his person when he was found, alive and breathing, by responding officers. Seth was then transported to a local medical facility where he succumbed to his injuries and died a little more than an hour and a half from the initial shooting.

Since that time, there have been a plethora of stories surrounding the possibility that he was the responsible party for the DNC emails published by Wikileaks. This has since been denied by the family spokesperson.

In light of the above, we are left with a few possibilities, though most have only been considering the two primary ones, those being:

The above two reasons are what have dominated the discussion surrounding the death of Seth Rich. Having participated in a number of those discussions, I ask that all of that related conversation be left in the relevant threads and keep this thread focused on the third possibility.

That being the following:

3) Seth's murder was not related to Wikileaks nor the result of a random robbery, but rather due to the fact that Seth was a potential witness in a voter fraud case against Edison Media Research

I can imagine you saying, "whoa, whoa, whoa there j&c! Where in the hell do you get that idea from?"

Well, two weeks after the initial report of his death, I posted a thread in which it was found that Seth Rich was a potential witness in a voter fraud case which had been filed against Edison Media Research.

In an update to that thread, MotherMayEye posted some very relevant and interesting information regarding this case. In that update, MME found that the case mentioned above had been dismissed just days prior to the most recent flurry of stories surrounding the possibility that Seth was the Wikileaker.

Vasa Croe and MotherMayEye then dropped the following:

Guess who the judge that dismissed the case, Judge Edmund A. Sargus, was appointed by.

originally posted by: MotherMayEye
a reply to: Vasa Croe

Ah….THERE’S more to go with your comment. Hold on to your hat!

Note the Magistrate Judge that referred the case to Judge Edmund A. Sargus?

A look at his bio shows that he is a partner at Baker & Hostetler: 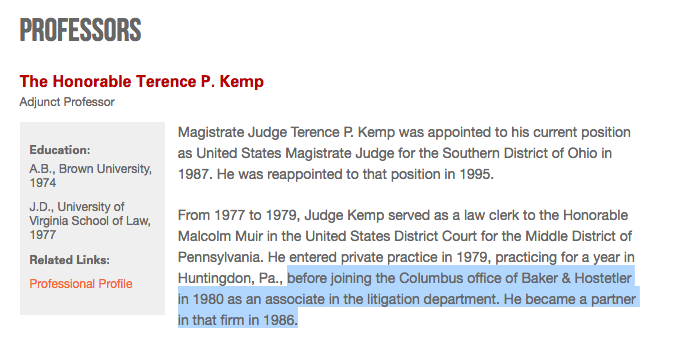 NOW…look at the attorney for the Defendant in this case, attorney Michael Farrell:

HE IS A PARTNER AT BAKER AND HOSTETLER, TOO: 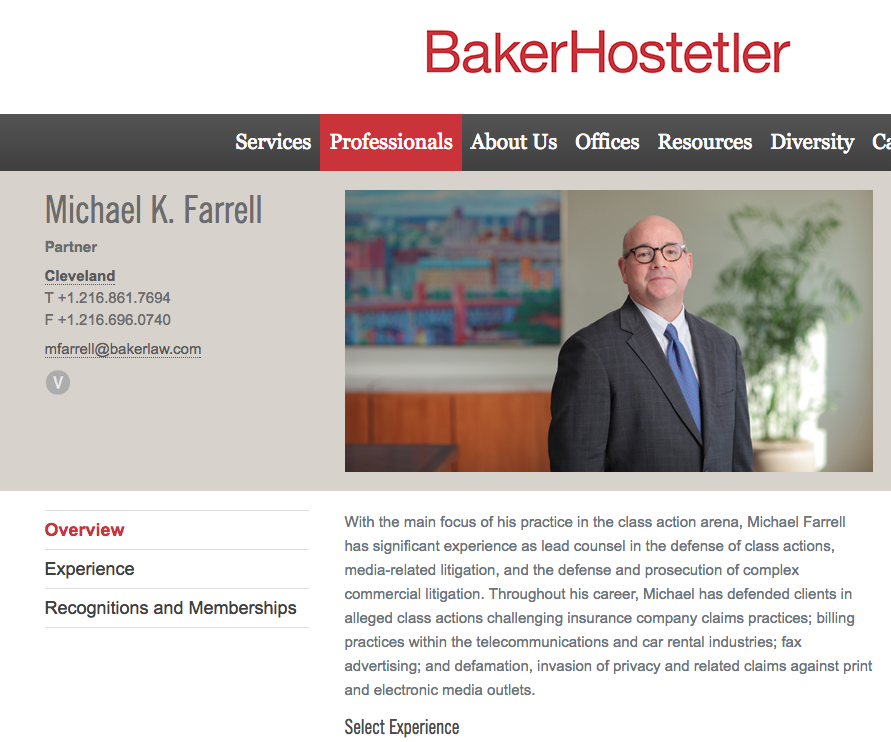 That is an incredible conflict of interest, and Magistrate Judge Terence P. Kemp, had NO BUSINESS referring this case to any judge.

ETA: See my follow up on magistrate judge referrals below.

I may not know all the "why's", but this poor fellow was murdered. To cover something up, or shut him up.

But will we ever know the truth?

Very well put together thread. However, I question whether being a witness in a voter fraud case would be enough of a motive for murder. That doesn't seem like the ramifications of a guilty verdict for a corporation on voter fraud would really be much more than a blip on the radar in the madness that is our national politics, and the corporation itself would protect individuals. A fine, either paid, or more likely the board bankrupts the corporation and just forms a new one.

Or, not enough motivation to escalate it to murder.

However, it's all the same group of people, so this certainly goes in the file of the Seth Rich murder conspiracy.

I can understand why you might be a bit disinclined to consider the possibility of the voter fraud case as being related to the reasons for Seth's death. I would probably have similar doubts myself were it not for the following:

In 2004, when Edison Research initially got exit poll data that said that Kerry was winning and Bush was losing at 9pm on election night and that the reverse was true shortly after midnight, Edison Research made a choice to “adjust” the raw data after that time so that it would match the electronic voting machine totals. Edison Research definitely wanted to keep being hired by the Media Consortium which proposes to tell viewers the true election results but which also chooses to trust electronic voting machine data. That was the last time that the American public has been able to see raw exit poll data.

Unfortunately this year, substantial exit poll differences have been noted in the US primary. In this year’s primary, the Red Shift appears to have become the “Clinton Shift”.

Arnebeck was the lead attorney, with Fitrakis as his co-counsel in the King Lincoln Bronzeville v. Blackwell case, which exposed electronic vote rigging in Ohio’s 2004 presidential race. During the lawsuit, a very revealing deposition of Michael Connell, head IT guru for the Bush family and Karl Rove, provided insight into how the election fraud conspiracy operated.

Connell served as the IT guru for the Bush family and Karl Rove. Connell ran the private IT firm GovTech that created the controversial system that transferred Ohio’s vote count late on election night 2004 to a partisan Republican server site in Chattanooga, Tennessee owned by SmarTech. That is when the vote shift happened, not predicted by the exit polls, that led to Bush’s unexpected victory. Connell died a month and a half after giving this deposition in a suspicious small plane crash.

So there was a suspicious death in 2004 of an IT person who worked for the Bush campaign in a very similar position to the one in which Seth Rich was employed who gave a deposition and then ended up dead after said deposition.

What are the odds that the same polling company is sued regarding voter fraud (by the same attorney) and both lawsuits have witnesses end up dead in strange circumstances?

posted on May, 23 2017 @ 04:42 PM
link
It seems rather suspicious that the surviellance tapes from
bar Seth left that night have never been looked at, even though
The father said initially he wanted to see them.

There is footage from a police body cam as well.

If they want more clues, these would no doubt prove valuable.

Ye, the bar owner says no one has asked for the tapes....

Where are the body cam/street cam vids?

He was alive, did he talk?


...but talking with a few holes inya;

originally posted by: xuenchen
I heard a rumor that a Russian Passport was found near the crime scene.

Indeed, I think that these are some of what Judicial Watch is requesting with their FOIA requests in relation to the matter. 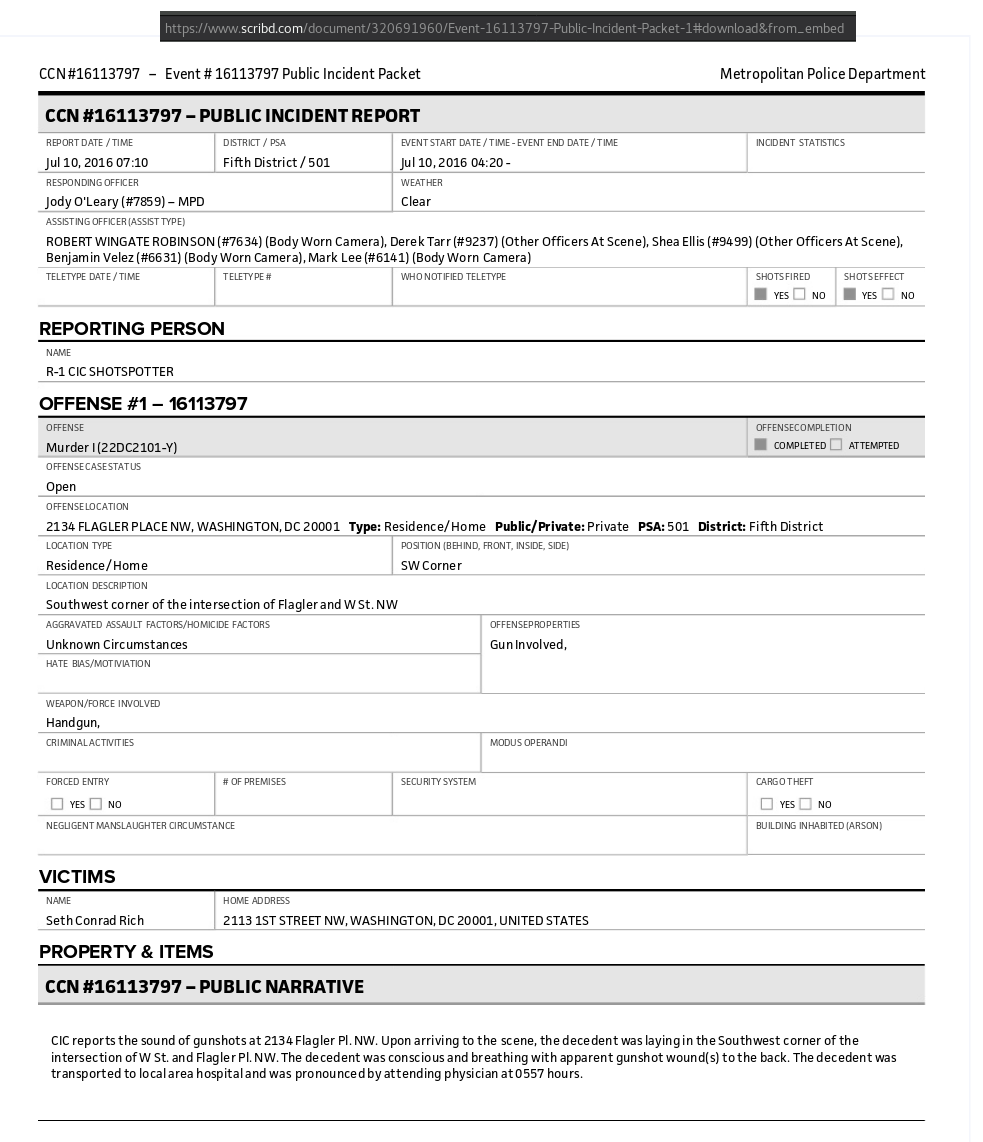 That seems odd. In the zombiecon murder that is the first thing they did is started collecting footage from the surrounding area.

I will post soon but not long after the downtown are got cameras cctv style on every corner.
They never got the murderer even though from the footage which was widely distributed there is 2 people that don't know why they have not found or questioned.


This is the type of critical thinking I love from our ATS members!

Nice thread j&c! Very well laid out and infinitely more information with links than any threads currently on this or the Russian topic.

I'll be keeping up here!

Thank you! Just doing what I do.

And thank you as well! Means a lot coming from you, I've always respected your posts from when I lurked before joining up to today.

I try and make my OPs informative and well-sourced; don't always succeed, but think I do a fair job now and then.

If I recall correctly, I've seen you mention shotspotter a couple of times in recent threads?

Well, I just noticed this:

SST, the company behind the gunshot-detecting ShotSpotter technology, expects to raise $26.6 million in its upcoming initial public offering — half of which would be used to pay off debt.

The company publicly set targets for its stock price and fundraising totals in an amended filing with the U.S. Securities and Exchange Commission on May 19. The filing sets the expected price at $10-$12 per share and specifies that SST would be offering 2.8 million shares.

SST has already raised more than $67 million in venture funding.

George walked up and down the street and narrated where he felt cameras could have been located.

I don't understand how or why the computer of a victim of a "botched robbery" would end up in the hands of the DC police or the FBI. (Especially the FBI)

I mean, is it normal for victims computers to be taken? (I really don't know the answer, but I wouldn't think so, unless something more sinister were suspected.) Something was on his computer.

originally posted by: xuenchen
Sure it was a botched robbery.


No, they got the valuables -
His memories.

What do you make of this from the wiki editors page on the subject?
I would suspect it relates to the investigation of voter fraud theory.

That is untrue. There is a second conspiracy theory floating around out there that doesn't claim Rich as a source of the leak--quite the opposite--and people that are familiar with the sources will know what I'm talking about. But I'm not here to give conspiracy theorists a podium. Geogene (talk) 05:51, 20 May 2017 (UTC)