The Truth About The Berenstein Bears

posted on Apr, 17 2017 @ 11:41 PM
link
People still not grasping the concept of ME is surprising to me. Using the magic mirror from Cinderella as an example, because thats the most glaring ME to me, in this present reality it never was mirror, mirror on the wall so how or why would there be evidence from anything else. Digging up old books and maps is useless because the history of those items were always what it was or intended to be in their reality, timelines they're located in.
edit on 18-4-2017 by wickd_waze because: ASU

Hahah, you found a typo, kudos to you! Now did you want to contribute, or maybe add in some original thought concerning the thread, or are you just here to derail? Did you even watch the video at the link I posted or anything?

Back on subject, I should say here that I don't believe it does or doesn't exist, simply that I'm open minded to it. Makes for some fun mental exercise, these sort of topics.

But you don't mind jumping to other conclusions that defy natural laws; namely a resurrection of the dead? hmmmm

This past weekend I traveled to my parents house to visit them for our celebration marking the resurrection of the Lord, Jesus Christ.

posted on Apr, 18 2017 @ 12:13 AM
link
Even if there was a timeline adjustment in the past, then that would be an alternate line from this one. Therefore, this universe has always contained the "Berenstain Bears". Now if one was to modify the Mandela Effect to essentially say that people have false memories from a timeline to which they do not have access, then.... How in the hell could I argue with someone like that; except to say, if that's true, it must be possible and therefore likely that there are many universes with different timelines - in which case, those experiencing the Mandela Effect, especially together on the same items, must be driven mad by the fact that their memories are nearly completely fabricated by the memory of other timelines. In other words, you couldn't possibly understand locality. That would lead to insanity for any mortal.

But assuming then that the subject is generally unaware, or precisely unaware for that matter, then there would be none to oppose the force and everything would continue as normal as if everything that is known is obvious. Therefore, there would be no mention of the Mandela Effect in regards to situations such as these, at least.

But you don't mind jumping to other conclusions that defy natural laws; namely a resurrection of the dead? hmmmm

This past weekend I traveled to my parents house to visit them for our celebration marking the resurrection of the Lord, Jesus Christ.

Resurrection of the dead has a value. There is no value in renaming cartoon bears.

Then what would you believe? What evidence would it take to convince you, because, frankly, any evidence of said anomaly,is naturally going to be anecdotal.
regards,
tetra

It is truly amazing to observe the discussion of the ME. Love reading the threads.

Am not a believer, because me thinks it can never be proven, nor denied. It's merely in another realm of ideas, concepts.
It seems to be beyond belief, and beyond rejection.
It's our ego that wants to grasp at things, and judge and categorize them. Let it float.

Haven't we all seen enough, to know that nothing is as it seems?

It is truly amazing to observe the discussion of the ME. Love reading the threads.

Am not a believer, because me thinks it can never be proven, nor denied. It's merely in another realm of ideas, concepts.
It seems to be beyond belief, and beyond rejection.
It's our ego that wants to grasp at things, and judge and categorize them. Let it float.

Haven't we all seen enough, to know that nothing is as it seems?

Hey. I basically said that. I just wasn't pulling my hair out cause I like my hair.

Why? Because originally there were no vowels in the word 'Froot.'

The vowels were represented by an orange and lemon. The vowels could be whatever vowels you inserted in your mind. And because some people saw, in their minds, a 'U' and an 'I,' they were certain a new timeline was created where the cereal had two 'Os.' 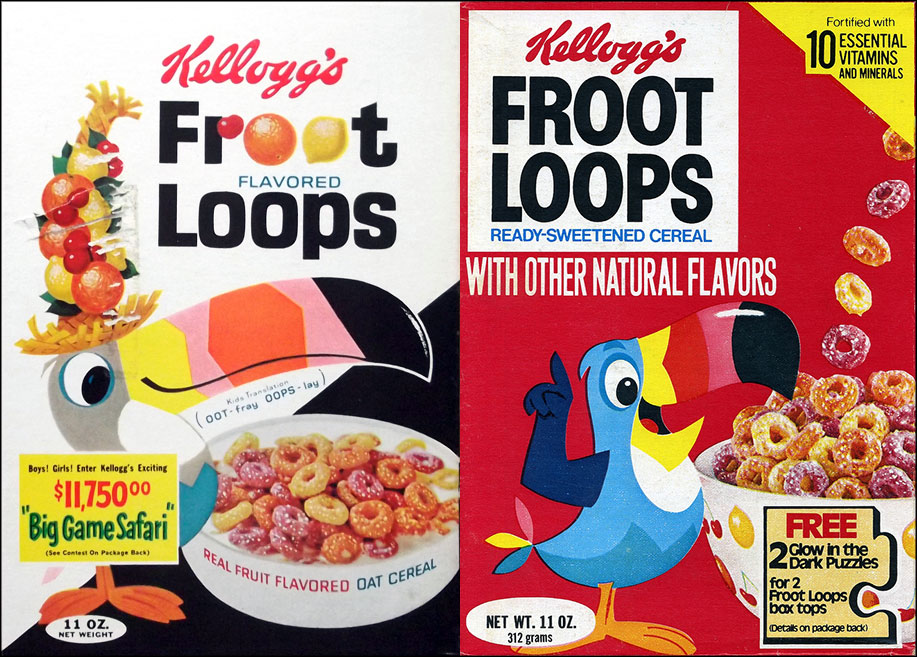 It was less about a typo and more about just lightly steering the conversation towards the origin of the term Mandela Effect having its beginings in people's claim that they rember Nelson Mandelas death occurring at different times.
It could just as well be called the Bereinstain bear effect since that seems to be the most commonly referenced evidence.

Why? Because originally there were no vowels in the word 'Froot.'

The vowels were represented by an orange and lemon. The vowels could be whatever vowels you inserted in your mind. And because some people saw, in their minds, a 'U' and an 'I,' they were certain a new timeline was created where the cereal had two 'Os.'

You have solved the Mandela. Everybody can go home now.

posted on Apr, 18 2017 @ 07:10 AM
link
I don't care what anyone says about this. It was Berenstein when I was a child. My parents both remember it as Berenstein. In fact, I brought it up to my 67 year old father just the other day, and I asked him if he remembers the Berenstain Bears. He crinkled up his nose for a second and said Berenstain, wasn't it Berenstein? I told him that no, apparently not...It's Berenstain, and has always been Berenstain.

posted on Apr, 18 2017 @ 07:11 AM
link
Here is a screen shot from a cartoonist-illustrator who has drawn some of the licensed characters (with full creator approval) including Disney, Kellogg's and...The Berenstein Bears. Credible enough?
ronzalme.com 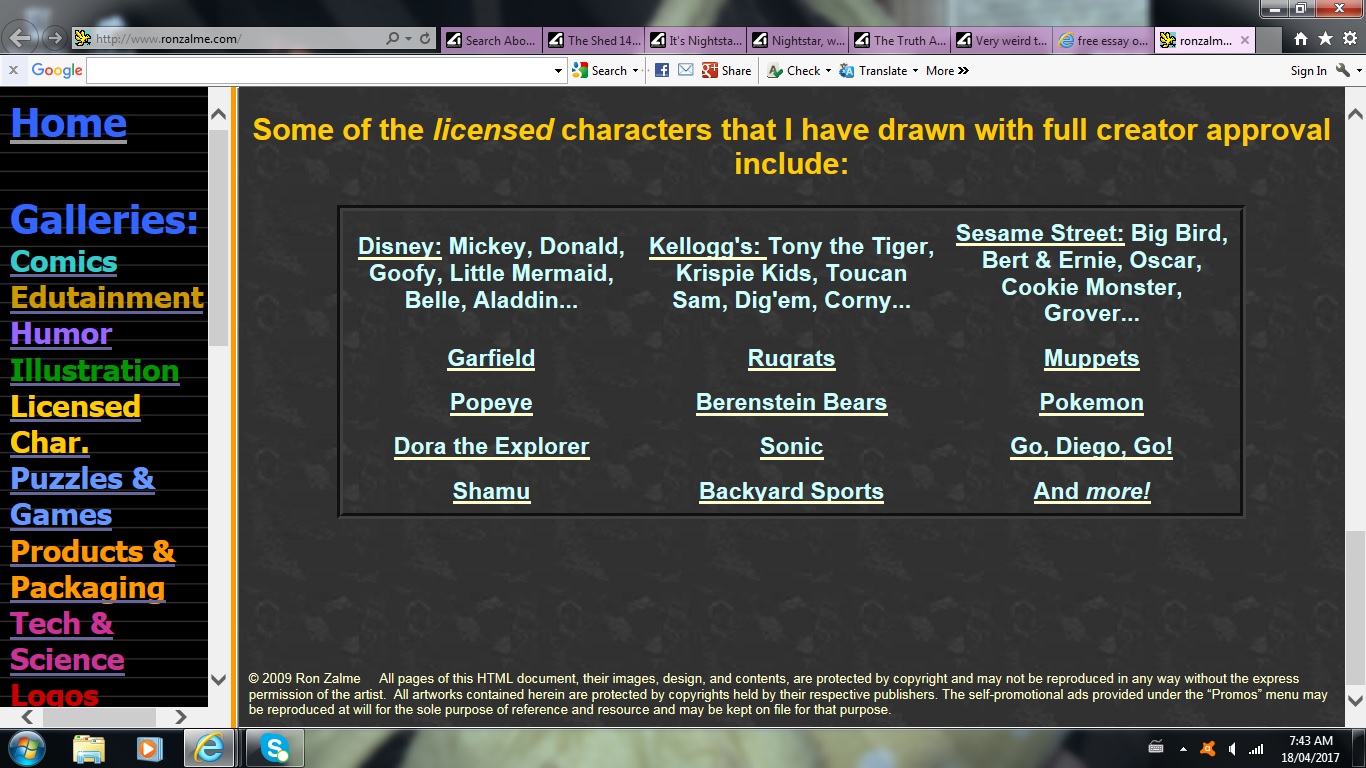 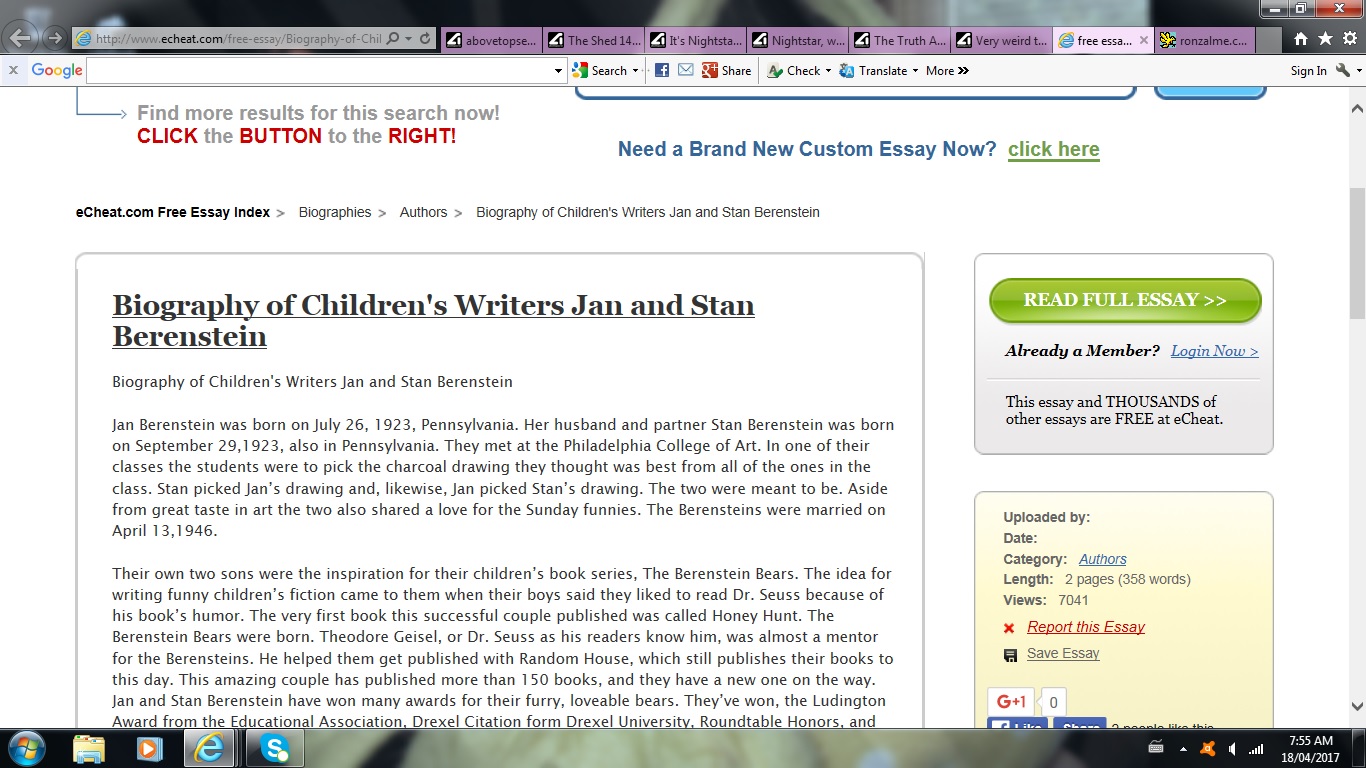 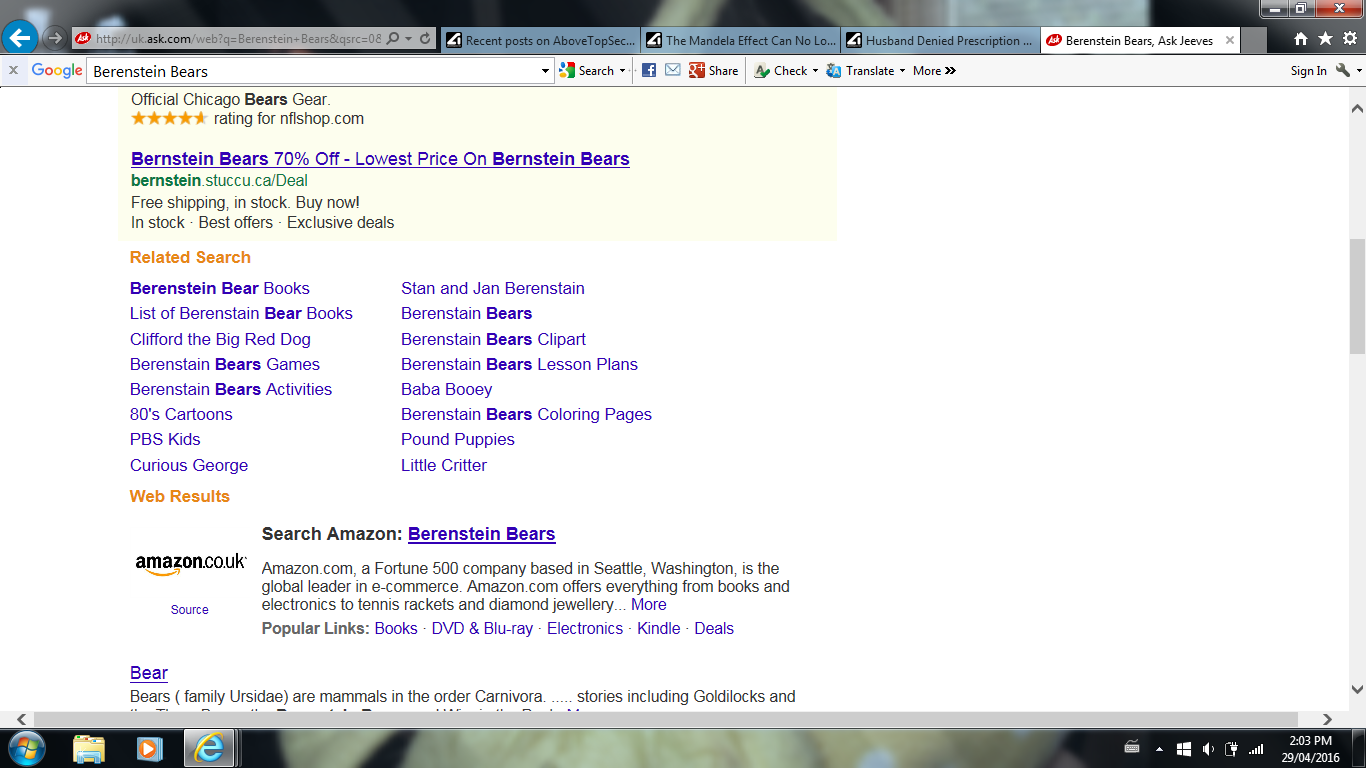 Unfortunately, there is no arguing against this and will mainly fall on deaf ears because most who seem to have an almost irrational belief in the Mandela Effect is all you will find here.

It's the perfect Troll subject when you think about it: Someone who claims to suffer from the effect does not need to provide proof of any kind, but simply make a claim that it happened, and you must accept what they say is correct, no mater how outlandish their explanation is.

You'd have better luck debating with a brick wall.

You've had people claim that our bodies are different.....yet no medical doctors or surgeons have come forth to back that up.

Countries not located in the right place.......yet no actual cartographers are shouting from the hill tops about it.

Capital cities are not right.....except you'll find that the people from the actual country are not the ones claiming it.

The problem with any of these debates is: they all break down to "Yes it was" vs "No it was not", with one side not having any solid evidence (finding a name that is easily misspelled is not exactly what I would call Jury Proof evidence), and the other side having plenty of solid evidence......except their evidence isn't admissible because, well, of course it's different in this universe, only their consciousness traveled from some other universe.

Like I said: It's the perfect troll when you think about it.

Hell, even crop circles have SOMETHING that can be shown.

But the Mandela Effect: All one needs to do is claim that something was different, and there you go! You're in the club. And no arguments against it will work, because, there is absolutely no way that such a large number of people can misremember something (guess mass hysteria doesn't exist), because the human mind according to them is perfect (which means optical illusions are not real either, because humans are suddenly the most perfect data recording machines).

Personally I gave up a while ago on arguing this because it became very apparent that it's a waste of time to argue against it. They will always claim that they are special and that something strange happened to them, instead of simply admitting that people do not always remember things correctly, especially if it is something they do not deal with on a daily basis.

So when someone starts jumping up and down claiming they've come from another universe, most likely better to simply welcome them to this universe and move on, instead of giving them that attention that they seem to crave so much.

posted on Apr, 18 2017 @ 08:43 AM
link
I don't know if anyone is interested, but I have just e-mailed the illustrator (ronzalme.com) to ask a few questions regarding the spelling of "Berenstein/Berenstain Bears".

If I get a reply I can post it here.
Just curious to see what someone else has to say or if they're even aware of this spelling conundrum.
(specifically because they have actually worked for the authors)
jacy

Say "is it possible that we had a timeline shift and of all things that could be changed, they changed Berenstein to Berenstain."

Now that you have said it, it sounds silly doesn't it.

I'm with you 100% OP. I agree that such a paradox could be possible but is very unlikely.

posted on Apr, 18 2017 @ 09:23 AM
link
It should also be mentioned that it is not a coincidence that the more advanced in technology or more dependent on technology we become the more we forget and quite honestly the dumber we get.

Seriously, I used to be so fast at doing math in my head and I used to be a great speller. I also don't have a great memory anymore. Why? because our phones can do all that for you.

posted on Apr, 18 2017 @ 10:10 AM
link
I have went back and forth with this. Some things I remember are "out of tune" but most are not.
I am now looking for relationships in the makeup of the divergences.
I will also attempt to establish a personal timetable to pinpoint when a "drift-rip" might have occurred.
Another avenue I will pursue is to view older personal and public photos, though I expect little success here.

The point is that this seems to require a personal approach, though shared thoughts are always good. Whatever this is, exotic or mundane, it's personal, even when it is on a large scale.

There's no right or wrong to this. If it is "real", in the physical world or a mental condition, it is too big to ignore.

Why is it that no one is actually interested in looking into how our brains work?

It's a fascinating phenomena and really interesting when you go down the rabbit hole of why so many of us fall for the same tricks however that's all it is.

What a wonderful time to be a Narcisist. If the only evidence is our faulty memory then sky's the limit.

Spell checker is brainwashing me.