The Truth About The Berenstein Bears

page: 1
26
<<   2  3  4 >>
log in
join
share:
xMoralDeclinex
+4 more
posted on Apr, 17 2017 @ 06:22 PM
link
I have seen many threads and conspiracies surrounding the Mandela effect. They are filled with claims of cover ups and alternate timelines. I consider myself a very open minded person, but not so open minded as to let my brain fall out. I cannot speak to all the different cases of the so called "Mandela Effect", just give my evidence and opinion on this particular case.

The truth is, The Berenstein Bears never existed. It has always been spelled "The Berenstain Bears". I remember when I first read about the conspiracy surrounding this, and I could not remember how it was spelled. Why, you say? Because I was 8 years old when I was reading these books, and I simply did not care! It is easy to fall prey to following the pack when someone else makes the claim that "it was spelled this way, I know for sure!". But if you were left to your own memories, without outside "confirmation", would you come to the same conclusion? I have once pondered whether or not "banana" was even a real word, because I thought it sounded stupid. Obviously, banana is a real word (right?). I mention this just as an example that your mind can play tricks on you, and it can also be easily swayed at times.

This past weekend I traveled to my parents house to visit them for our celebration marking the resurrection of the Lord, Jesus Christ. While I was there, I decided to take a look around the basement, because they have all kinds of old junk stuffed down there. While I was sifting through the mess, I came upon my old Berenstain Bears board game, as well as some of the books. That is when I decided that I would create this thread in an attempt to dispel the myths that have been wildly thrown about. The pictures I have provided are of an original board game, and original books that I had as a child. As you can see, I have included in the pictures the cover and date on the back of each book as evidence. 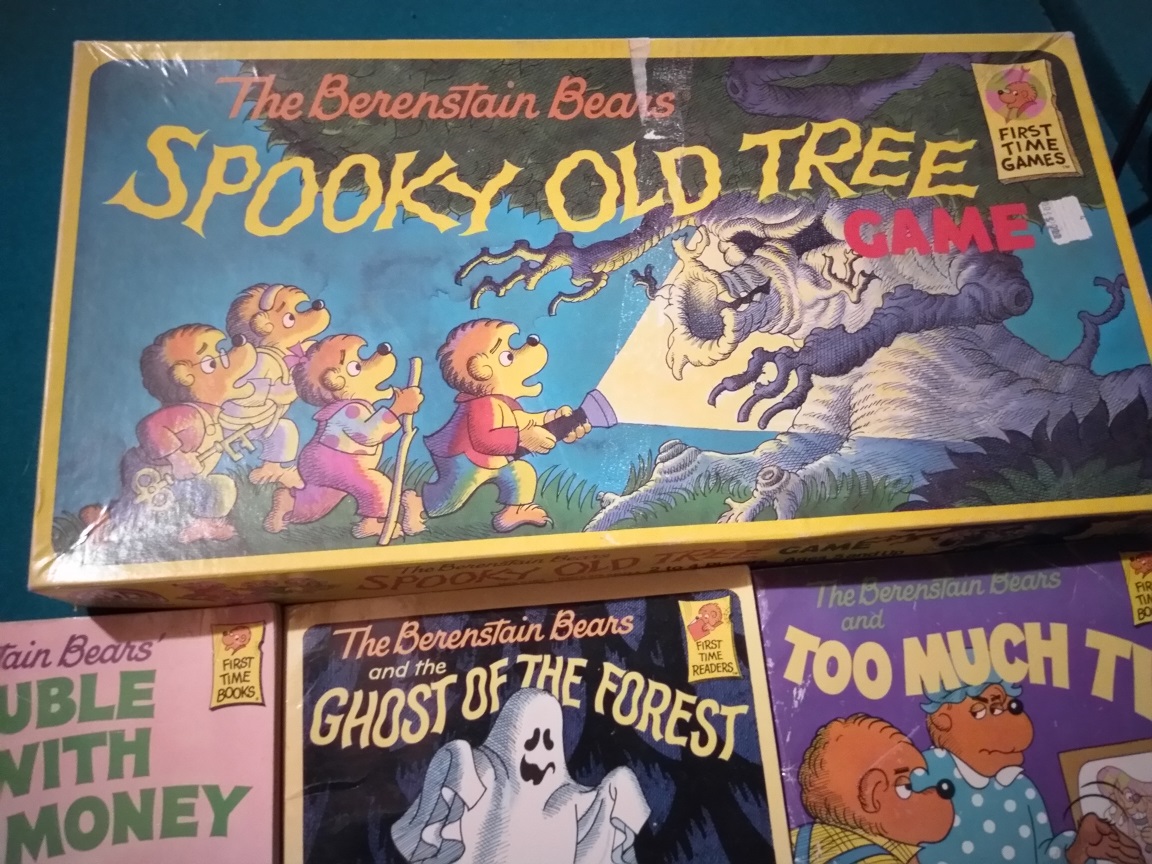 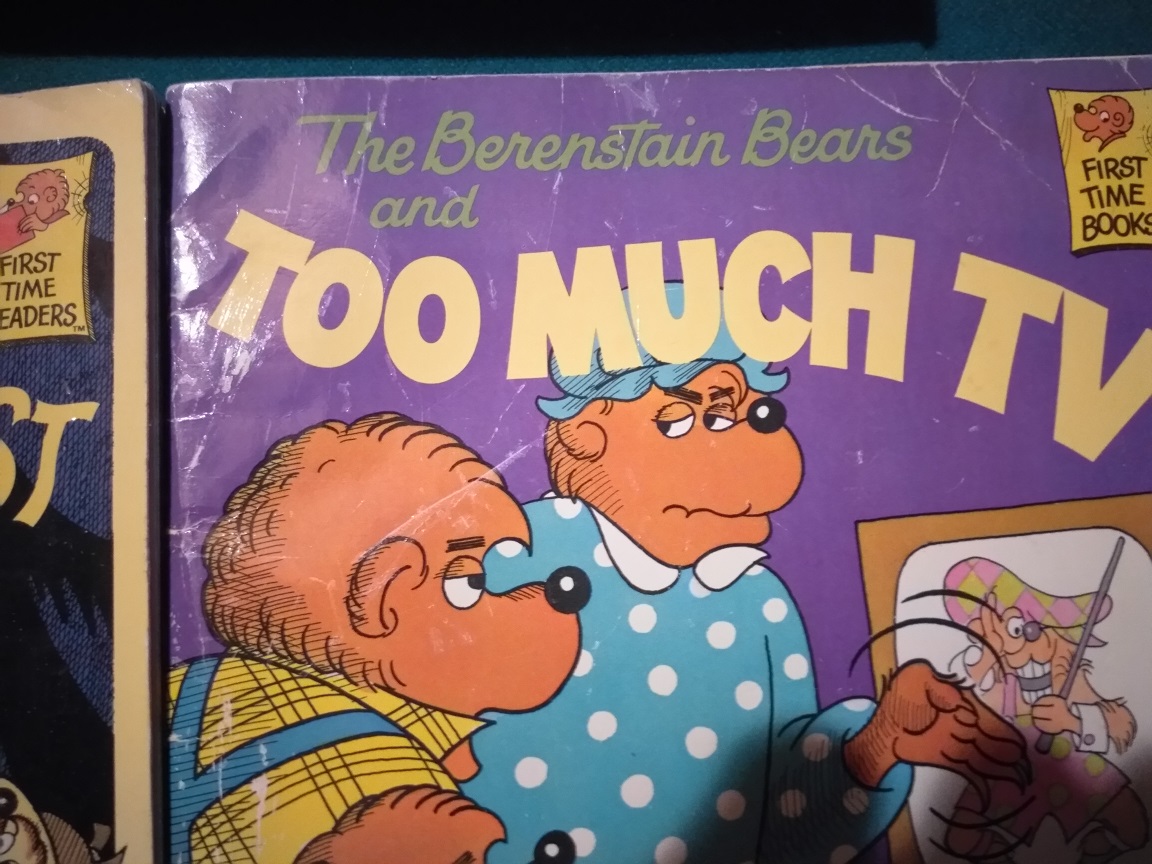 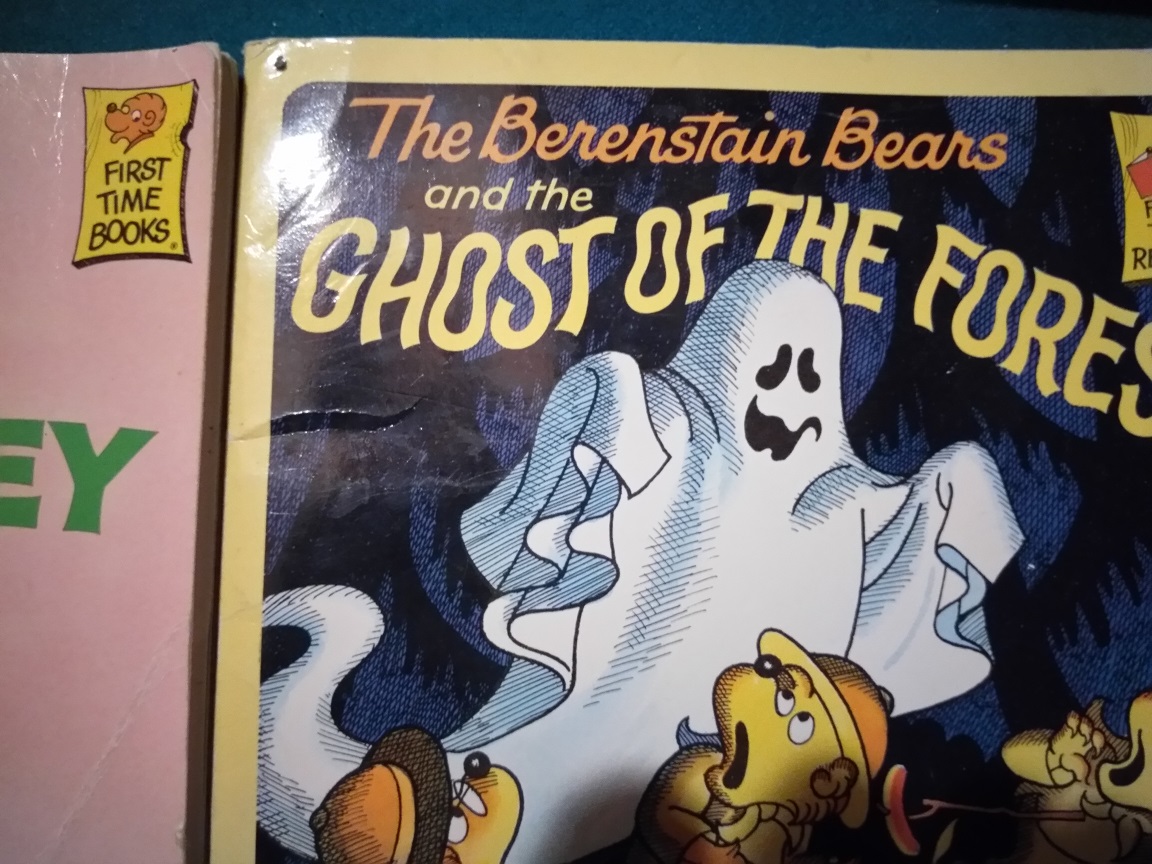 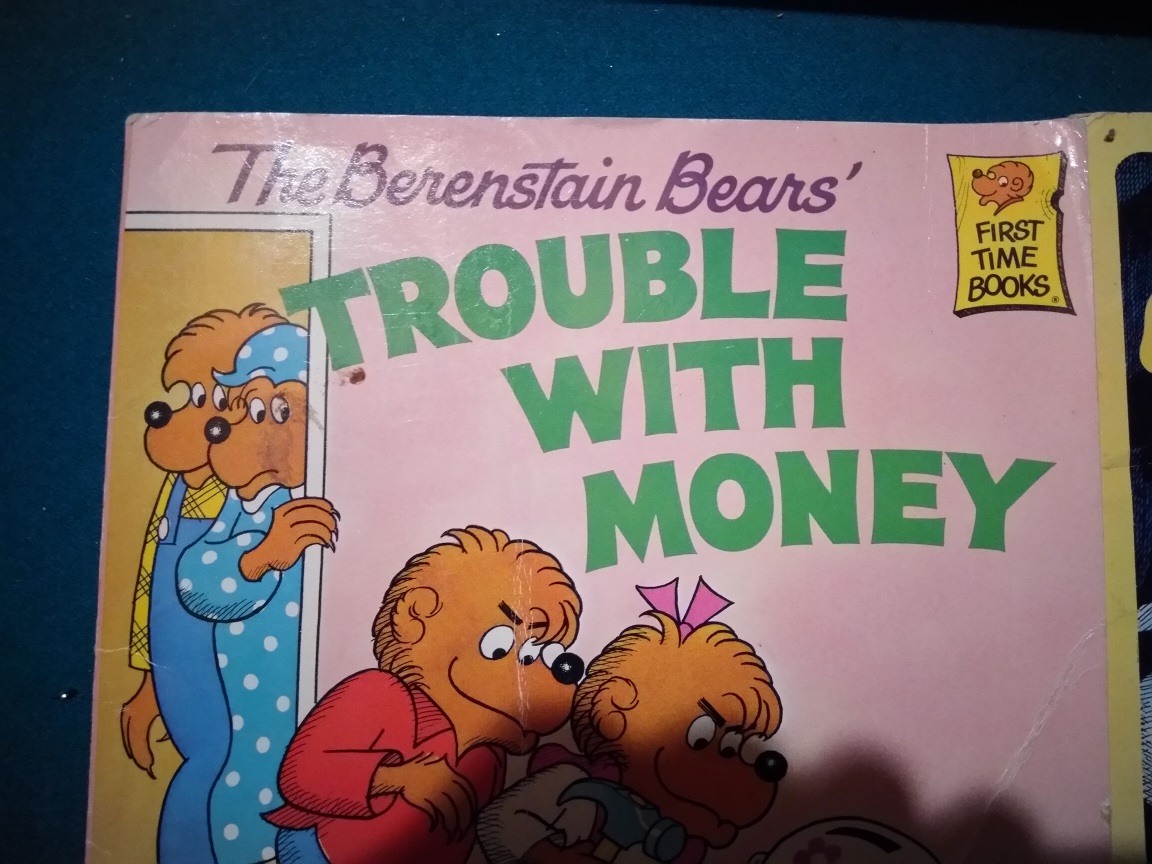 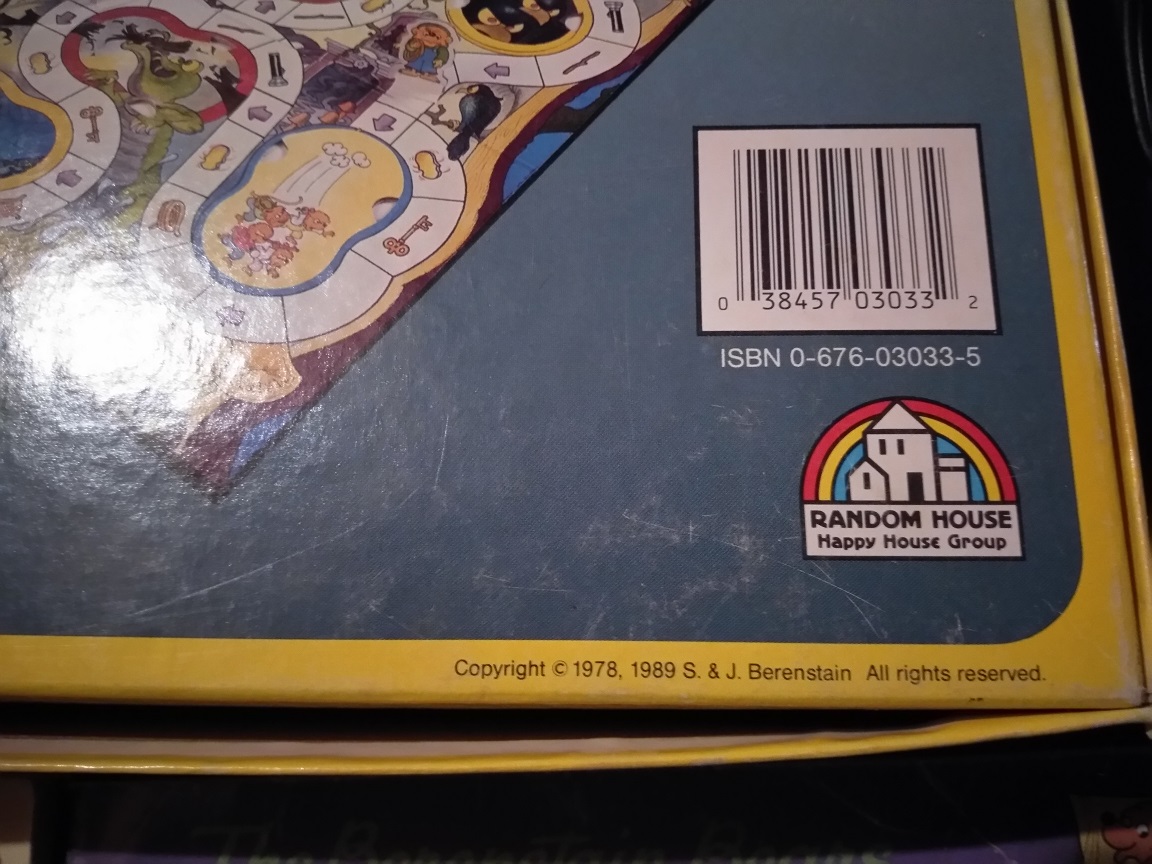 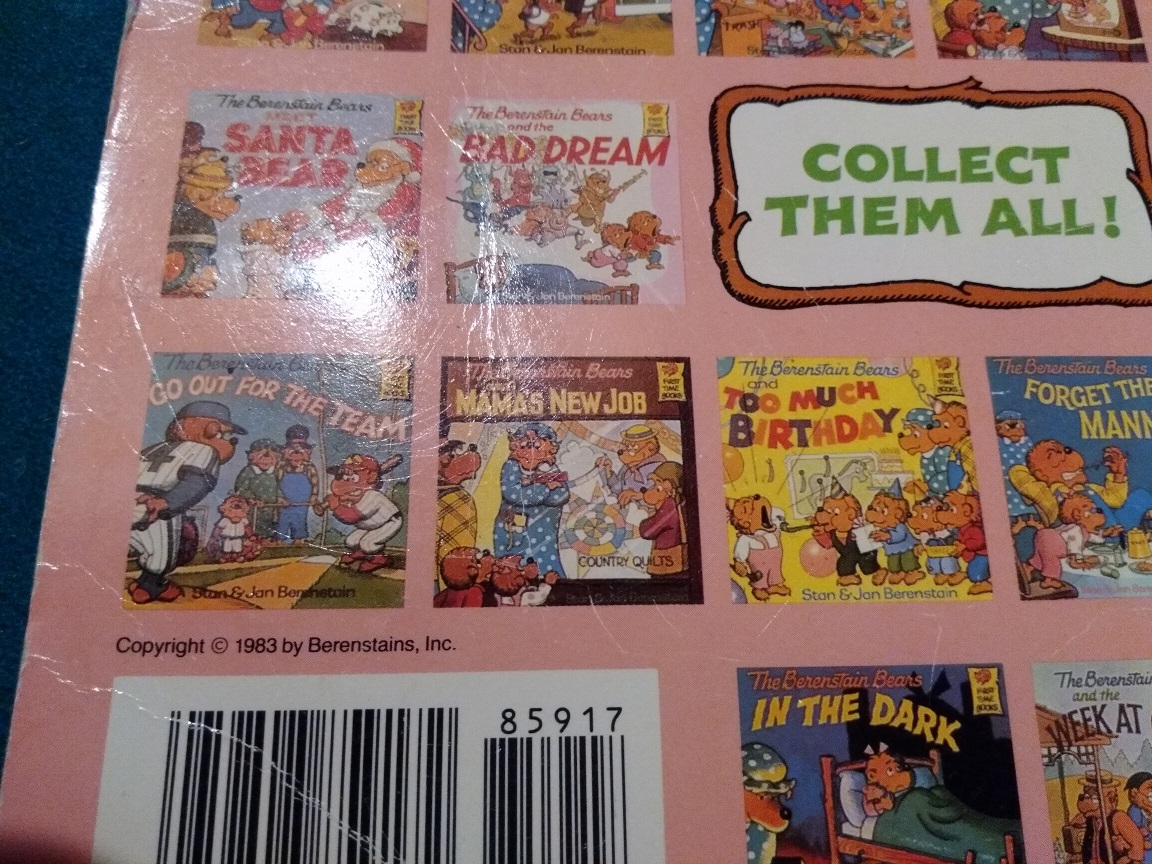 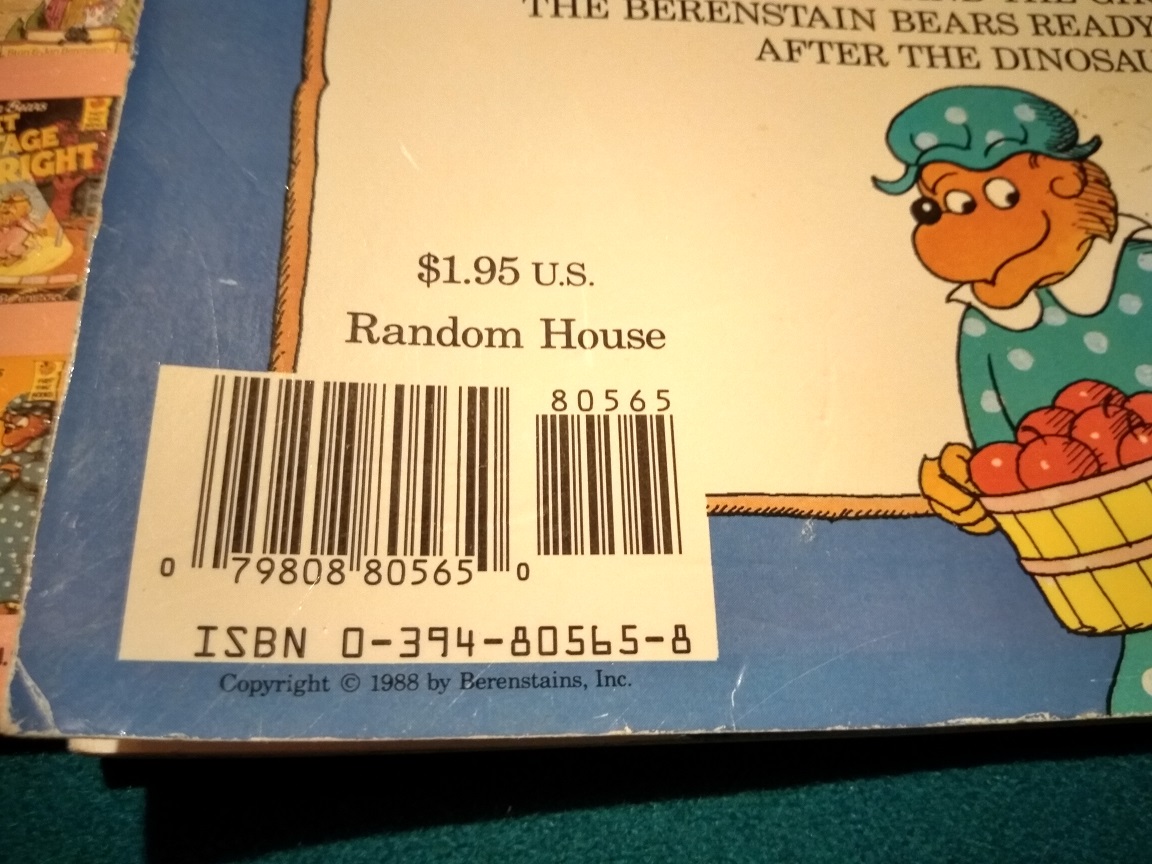 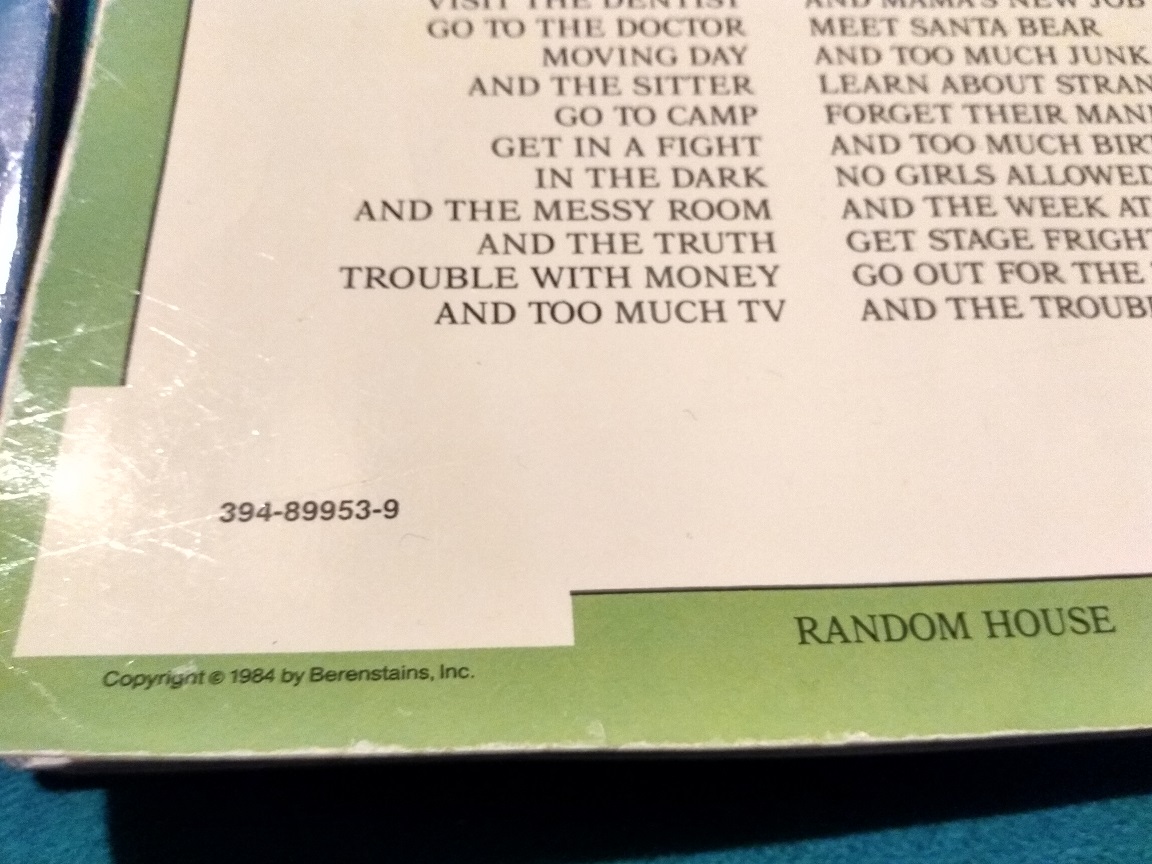 Although I do believe that many conspiracies are true, and I do believe that alternate timelines are certainly possible, I simply do not believe that either of those explanations are plausible in this case. I believe it is simply a matter of poor recollection, "false memories" as they say. I find this to be much more likely than "they removed all evidence of this, they destroyed all copies of the original books, this is all a cover up". There would certainly be nothing to gain in the case of the The Berenstain Bears. How many times have you thought you had done something, "remembered" doing something, only to discover that you hadn't? Plenty of times, I am sure. In my opinion, the case is closed The Berenstein Bears, or should I say "Berenstain Bears".

posted on Apr, 17 2017 @ 06:33 PM
link
Great thread with actual evidence, I wonder if/doubt this can be shown from the other timeline

I really need to question my reading material when I am providing alternate realities to cartoons...

Besides, I think this brings forth the famous case of tomato vs. tomato and which way is proper to say. I feel people may be applying the pronounced version the brain remembers it to the way it was actually spelled the whole time.

Weird nonetheless! Damn effect won't go away now. I was always taught that 'i' comes before 'e', except after 'c'... and the word 'weird' managed to thrust itself into an alternate reality on me... darnit!

posted on Apr, 17 2017 @ 06:41 PM
link
Thank you for this thread your questioning of the bereinstain bears and photographic evidence.
A+ for effort.

posted on Apr, 17 2017 @ 06:43 PM
link
I have to agree, if someone told me that it was not Yugi that stole picnic baskets or Gentle Bill was called Ben or something, then I would really pay attention.
a reply to: ttobban

Thank you for checking out my thread! If a moderator believes this thread would be better suited in another forum, please move it to where it would be best suited.

Your reply reminds me of this video that came out about Milk (Milk, Malk, Molk). My Dad and I were laughing about this video just the other day!

mazzroth
+1 more
posted on Apr, 17 2017 @ 06:57 PM
link
Good post, however I would like to point out ( conceptually only ) that if a timeline was altered then it would be complete. Every physical bit of evidence would be changed to the new variant bar none, memory is an interesting thing though..with RAM it can leak ( old bits of data hold up magnetically ) and if we were in a Programmed Reality this "Leaky" memory could be a very real thing and hence some "Units" may remember the old reality.

I get where you're coming from & the pics are obvious. Berenstain not Berenstein.

But IF the Mandela effect is about something in the past being changed, it would be impossible to find physical evidence supporting it, no?

So your proof doesn't really prove anything.

If I went back in time to 9/24/2011 when you first registered here and changed your login name to yMoralDecliney, how would you be able to show it was ever anything else? Maybe that's a bad example but you should get my drift.

It's the whole time paradox thing.

I don't think there is any reason to believe that our timeline was changed. As I mentioned, I am not necessarily against such ideas being possible but I think that jumping to these kinds of conclusions without first exhausting the more likely causes is simply ridiculous. One thing I learned from going to school for recording is to look for the most simple problem first, because more likely than not it will be the culprit. Check your mic cable first before you go tearing your gear apart only to realize it was the most simple thing that was the source of the problem. I think more than anything, people simply want to believe in an alternative timeline to feed their imagination. It has been proven that false memories can be easily formed in the human mind, and I think that this is no different.

Ultimately, the way I see it, if a paradox happened or if it didn't happen is essentially an exercise in belief or faith!

I think that anything is possible, considering how little we really know about our existence, especially if you throw in the possibility of time manipulation. In 100 years, our technology would seem like magic to us.

I just don't see how there could ever be any proof either way.

You either believe or not! If our past was manipulated, we'd never know.
edit on 4/17/2017 by OrganizedChaos because: (no reason given)

posted on Apr, 17 2017 @ 07:50 PM
link
Honestly, i remembered the Berenstein Bears, but after you posted those pics, im in agreement with you, and humbly admit, I AM WRONG.
Looking at the font, the 'a' could easily be mistaken for an 'e' to a 7-10 year old boy, as I was when i read them.
Plus, how arrogant could I possibly be to say, "those pics are wrong, and the only explanation is that history changed and were living on a different timeline!" Sounds pretty stupid to me....
Memory is not a record, but an interpretation.
And until someone goes to their car tomorrow, and finds it is black, when they owned a silver car, i WILL NEVER BELIEVE IN THE "mandela effect".

originally posted by: Brian4real
And until someone goes to their car tomorrow, and finds it is black, when they owned a silver car, i WILL NEVER BELIEVE IN THE "mandela effect".


That will never happen because with a paradox, you bought the Black one.

What bothers me is that you remember Berenstein.

Do you remember how to get to work everyday? If you don't trust your memory, shouldn't you check a map before going to work?

Thing is you remember how to get to work everyday without looking at a map, because you do it everyday... Just like you remember the books you read everyday as a child, and that your world has been saturated with since.

Only recently did you discover what you've known and been saturated with since childhood is now different.

You didn't prove anything, you only reinforced your own ability to stay inside the box - follow the pack.

I always felt that if the Mandela existed, it would have to do with dying, and from then your consciousness gets shifted to another reality. Sure, in this situation, some may say nothing else would have changed in this alternate timeline, but what if the only ones that exist, the one you "wake up" in, and notice the effect, are the only ones where you haven't died but they have small changes.

It is hard for me to explain, this video explains most of what I'm saying but sort of sticks to the Schrödinger's cat thing and the train of thought that the only difference is the death. But what if the next available reality with you alive requires small tweaks of things you may remember from a different timeline?

I always felt that if the Mandela existed, it would have to do with dying, and from then your consciousness gets shifted to another reality.

The Mandela did exist his name was Nelson.

edit on 17-4-2017 by SolAquarius because: the nelson mandela effect made me mess up

That will be the excuse used, that everything has changed, but then the paradox of that is, if it's all changed, how do some "know" it's changed?

To which they will answer that they're more awake and in tune with the universe, thusly it's just a big ego boost for them.