nah i dont believe, i just have an open mind

two completely different things.... and im sure the OP has also said he doesn't believe one way or the other.

nah i dont believe, i just have an open mind

Well if that's the case then you should investigate all sides instead of stopping at the one that best fits in your box
edit on 24-1-2019 by ManyMasks because: (no reason given)

oh i forgot you know all 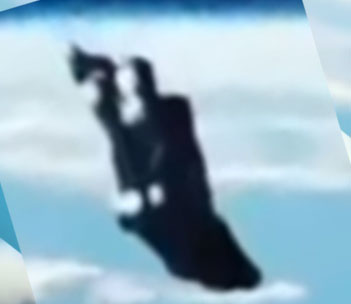 Yeah not cgi, but it does look a bit like 2001: a space odyssey with a 2-d cell manuvering over a video background. Then add a cell that has a reflection on top, all good. Very good fake, worthy of awards in the 1970s but the way the object tracks, how one side is always facing the camera, there is no logical reason why the object would only show one side to the camera if it were moving in such a chaotic orbit in our one plane of motion we witness.

1. The object seems to not care another spacecraft is near it

2. Its motion is far to chaotic for the perfection of the one sidedness

3. Again the small object leaving seems like just another 2d sprite moving in 1 direction with no depth at all

4. The illumination while it has some tracking as the sun seems to be up and to the left but the object that leaves it shows no light interaction at all.

The Black Knight is most likely a space blanket and yes it can hold a seemingly solid shape for a really long time because theres not any forces that would unfurl a corner or squeeze it into a ball because there's nothing around it. The gravity of Earth keeps it here but unless some other space junk hits it it will not change shape.

So many arguments going back and forth both sides making claims that arent true.

It takes work people this is all high concept stuff....dost thou research?
edit on 24-1-2019 by Poofmander because: Fat fingers

originally posted by: oldcarpy
a reply to: Outlier13


disbelieve the possibility of something that cannot be explained.

But, if something has been/can be explained, why do you think this is a bad thing?

I didn't say nor imply what you are inferring. My point was an individual set on purely debunking anything will always be relegated to a singular mind set which is definitely not a trait of a critical thinker.

And a debunker is not synonymous with a critical thinker. There are plenty of quack job debunkers who wouldn't know a critical thought process if it struck them in the head.


As an aside do you believe in the existence of an advanced race not from Earth or that we are genuinely the only "intelligent" species in the entire Universe?

I don't know. But if there were aliens observing us and they wanted to be unseen, we wouldn't see them. And they might still be puzzled by what we THINK we're seeing, which isn't them.

This is what I mean about debunkers. You make opposing statements in the same sentence. You start out admitting you don't know yet conclude with an absolute statement by assuming you understand how they think.


Seriously, I doubt -- with all the garble, noise, and carelessness which is tolerated [even encouraged] in this field -- if there were cles to any visits, we could filter them out from the background static. Which is unfortunate because there's no reason 'they' could not exist and even be here.

It's irrelevant if there is carelessness in any field of research. That's the nature of man. Therefore you cannot discount the possibility of something because of carelessness, chaos theory, or whatever label you want to prescribe. And yet once again you contradict yourself by saying we could "filter them out" even though you state earlier if they (aliens) "wanted to remain unseen, we wouldn't see them".

That's multiple contradictions in your statements yet you want...no expect me to take your research as the final word? Not gonna' happen mate. Not until you adjust and correct your logic in how you approach your research.

My point in asking you the question if you believe in the existence of an advanced race not from Earth is to know if you are or have conditioned yourself to always disbelieve the possibility of something that cannot be explained. It's like an altered version of pareidolia.


I really worry that either my ability to express myself clearly, or your ability to properly parse compound and conditional sentences, is slipping.

Your statement is clearly meant tongue in cheek but it is ironic that I've already pointed out your contradicting statements in multiple posts so yes, in fact, you do not express yourself clearly and that I do not mean tongue in cheek.

I already pointed out to you the 1 image contained within your massive PDF dump you put together showed the most plausible explanation could be a space blanket. The remainder of your PDF was superfluous.

posted on Jan, 25 2019 @ 12:11 AM
link
If there were really a Black Knight satellite above the earth do you think that the US, Russia and China would all be trying to send up ships to get a hold of it?

They wouldn't just leave it alone

posted on Jan, 25 2019 @ 12:12 AM
link
The entire YouTube channel is dedicated to posting "leaked" footage that all looks like CGI - this footage clearly is CGI and not very well done as others have mentioned.

I did. I came to the conclusion that the Black Knight is not real. I don't have a "box".

So "Debunker" = someone who disagrees with your woo?

There are also plenty of people who believe in Flat Earth because they "know" that Govt/NASA lies about absolutely everything but that idiots on Youtube are absolutely telling the truth because they wouldn't know a critical thought process if it came up to them, introduced itself, gave them it's business card and shook their hand.

It cuts both ways.

so your out your box lol
You came to the conclusion its not real
The chances are your right, and I myself would put it in the high percentage of being bs but for me there's always that chance it is, and it's good to contemplate both scenarios.

It's not good to live life in a box. You in one, then?

You got two hopes that this is not bs - Bob and Slim. And Slim just left town.

I didn't say I lived in a box, where I'm from if your out your box it means out your mind on drugs just a joke, I like to make myself laugh.

I don't really care that much about the BK satellite it's an interesting CT though to contemplate then drop, as it can't be proved.

I have looked into the BK before quite a bit. I would love it to be real, but I find that a lot of this sort of stuff just makes Ufology look woo-woo.

posted on Jan, 25 2019 @ 05:06 AM
link
Hey does anyone remember that Pepsi commercial in 2015 with the Black Knight featured in it?
It opens up with a block of text that says Tesla discovered a satellite in 1899.

Not that it's really related to the main topic, but it is interesting to see Black Knight topics pop up once in awhile.

I wonder though, is it aware of us? If it is a craft, wouldn't it make course changes to avoid whatever was filming it or at least make some sort of maneuvers? Unless it was dormant and/or has no propulsion. If the latter is the case, then why haven't we (the human race) scooped it up and studied it yet ?


If the latter is the case, then why haven't we (the human race) scooped it up and studied it yet ?

Because it does not actually exist?

I see. How foolish I must have looked with that post.