Please - don't anyone say its a TR3B or I'm afraid I shall have to call the Police.

originally posted by: oldcarpy
a reply to: Outlier13

There are also plenty of people who believe in Flat Earth because they "know" that Govt/NASA lies about absolutely everything but that idiots on Youtube are absolutely telling the truth because they wouldn't know a critical thought process if it came up to them, introduced itself, gave them it's business card and shook their hand.

It cuts both ways.

Flat Earthers debunk round Earth (in their mind) and it's absolute bollocks and clearly lacks critical thinking.

Maybe I am misunderstanding. Some debunkers do lack critical thinking, obviously. I am talking about generally speaking.

We can at least agree about Flat Earthers. I often look at their Youtube vids just to read the comments posted below - the sheer wilful ignorance on display there does make me laugh and then I think - hang on, these are real people? With jobs and presumably - God forbid - breeding?

Maybe we should just have a beer - it's Friday afternoon here.

The one that magically appears from behind the 'Black Knight' despite not having been at all visible before then?

I thought it had been debunked as space junk?
Or have I fallen for the cover story

posted on Jan, 26 2019 @ 07:04 AM
link
Haven't heard of it until right now, I'll look more into it, but cgi is always hard to tell these days because you can basically forge any imagery.

originally posted by: 0101rising
Haven't heard of it until right now, I'll look more into it, but cgi is always hard to tell these days because you can basically forge any imagery.

... which is why the 'going-in' assumption these days has to be 'fake' until proven otherwise and so far the OP hasn't produced a shred of evidence otherwise.


originally posted by: oldcarpy
a reply to: Outlier13


disbelieve the possibility of something that cannot be explained.

But, if something has been/can be explained, why do you think this is a bad thing?


Sorry, but "Debunker" = "Critical thinker" is simply not true! We have good skeptics, we need good skeptics in this subject, but the subject is full of hard-core believers and debunkers, which both run on belief.

Armchair debunkers like to throw around words like "critical thinking" maybe because they believe it adds an extra 20 points to their IQ, or they become instantly intelligent by saying, or writing these words.

The reason why this subject is a mess is because of these debunkers and hard-core believers, who do not really care about the truth, but all because of belief and being part of a group. People love to feel that they belong to something!

So, bring skeptic is good, like i said, we need them, but do not write "Debunker" = "Critical thinker" because that is simply not true.

If it's real debunking, then it certainly is true.
Link

Sure, there are people that don't believe aliens visit us that post against the idea without providing links.
That doesn't make them "armchair debunkers" though.

See, a claim can be posted in an instant.
Debunking that claim could take hours, days, even weeks.
Once a guy has debunked 40 or 50 youtube vids here, he doesn't see the need to debunk the rest so you're stuck with a "no it's not" from him.

Agreed, it's part of a sequence of 70-mm shots cosmonaut Sergey Krikalev took out the overhead window of the aft crew station on STS-88 as the thermal cover dropped by Jerry Ross drifted away. Here's a still from the onboard video showing Krikalev [circled] with the camera, and an inset of him and me together in Houston before the mission. 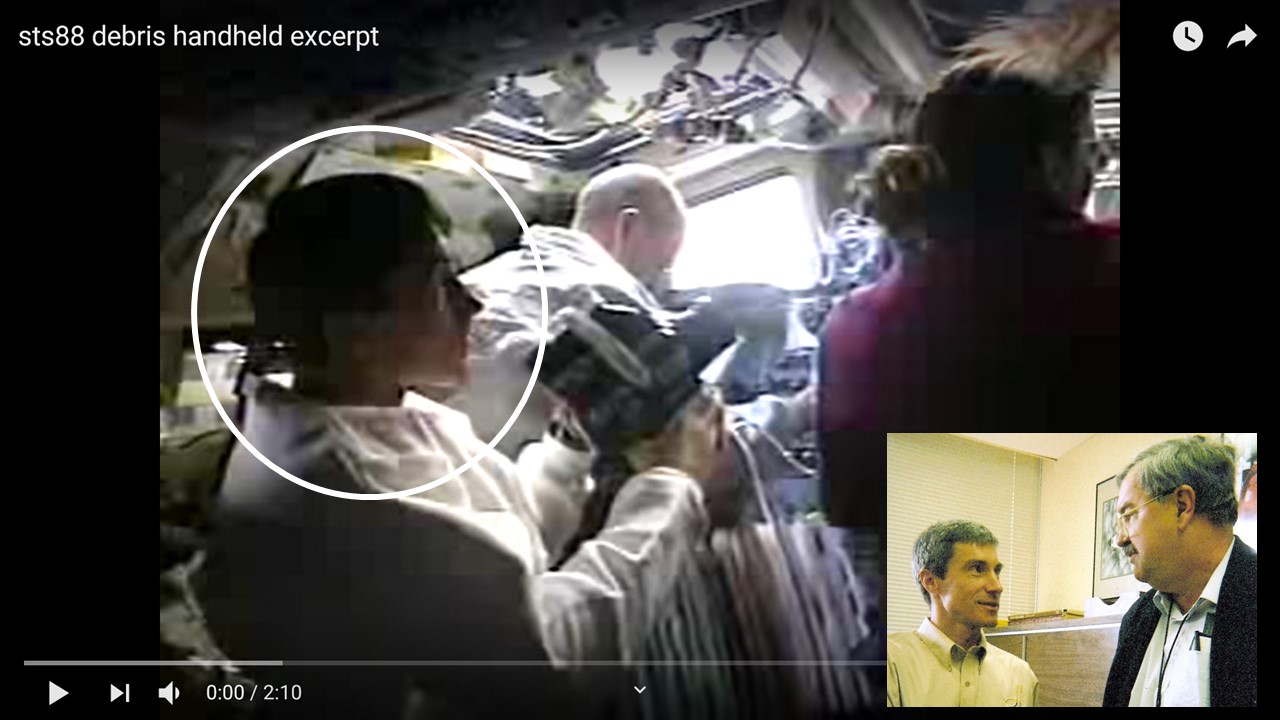 
Firstly, one other thing I wonder about this object. Considering what we call "space junk" that's 'orbiting' earth,
www.popsci.com.au...


In fact, there are an estimated 500,000 or so smaller orbital debris (between one and 10 centimeters in diameter) and about 21,000 larger bits (larger than 10 centimeters) spinning around Earth right now, according to NASA's Orbital Debris Program Office.

and then photos of a renegade thermal blanket

LOL, except that, like I said earlier "thermal blankets" aka en.wikipedia.org...

FYI these items were

BUT the 'Dark Knight' was first mentioned of in the 1950's! Are you suggesting a "renegade time traveling space blanket'?

When was that very first satellite launched? Oh yeah, Sputnik, in October 1957.

The one the US launched that took the pictures of the Yuge holes at the poles? Here's a synopsis

But hey, they say imma "conspiracy theorist!" but IDK man

But hey, they say imma "conspiracy theorist!" but IDK man

What I'd say is you're an eager-believer sucker for fable-spinning UFO writers and websites. And once you've fallen for any particular scam [you list several in your comment], it becomes a matter of ego-defense to just refuse to concede you could have been foolish enough to fall for such trickery.

You're in good company. That mindset is widespread and is the environment that promotes the flourishing of 'fake-news' of all kinds, effectively camouflaging and drowning out any legitimate anomalistic encounters that deserve identification and authentication.

BUT the 'Dark Knight' was first mentioned of in the 1950's! Are you suggesting a "renegade time traveling space blanket'?

Got a reliable source for that?

The one the US launched that took the pictures of the Yuge holes at the poles? Here's a synopsis

There are literally hundreds of polar orbital satellites. The 'black knight' satellite isn't one of them, because if a figment of overactive imaginations.

‘MALE’ magazine [men’s adventures, blood and women]….
Feb 1963
HOW WE KEEP TRACK OF RUSSIA’S SPACE FLOPS
Wilton Haring
PP. 67-68
… an amazing electronic “fence” that stretches across the southern United States. Operated by the US Navy, the so-called “Dark Fence” is designed to ring the alarm bell on any satellite that crosses the US….
In spite of the tremendous speed and accuracy of SPADATS’ techniques, SPADATS hasn’t always had space-watching down to a science. At Colorado Springs, they’re still talking about the ‘Dark Intruder’ episode, the terrible mess that began on January 31, 1960, when SPADATS spotted an unknown object in orbit. After detecting several passes in the next few days, the Commanding Officer of ‘Dark Fence’, Capt. W.E. Berg, decided that something was circling overhead on a roughly polar orbit. Capt. Berg raced to the Pentagon to report the menacing stranger to Chief of Naval Operations Arleigh Burke, personally. The reports was stamped “TOP SECRET” and rushed to President Eisenhower.

In all the confusion, nobody thought to notify the Surveillance Center, where all sightings are compared with traffic charts to find out whether they are new space objects or old ones. For three weeks, the Pentagon buzzed with rumors of a Soviet spy vehicle and even of a visitor from another planet. In the meantime, the Surveillance Center, which had been notified too late to come up with a fast report, had to search back through it taped observations to find out when the mysterious satellite had first appeared. They also had to check back through all their records of old satellite traffic to determine whether the satellite was really a new one.
They finally found the answer. The Dark Intruder was actually the capsule from one of our own Discoverer shots , fired the previous August. The retro rocket blast that was supposed to slow down the craft so it could drop back into the atmosphere, had apparently fired in the wrong direction, kicking the capsule into a new and higher orbit. The solution explained why the airplane that had been sent out to the South Pacific to catch the descending capsule in a large net had come back after several hours without having caught sight of it.
But it was only a year after the Dark Intruder goof-up that SPADATS had cut down that three-week time lag to a matter of hours or minutes. In February, 1961, SPADATS was able to sketch a complete profile of the biggest and most uncommunicative Russian satellite so far….