Today I am in a world where it is spelled "Stain" and the people that remember "Stein" are crazy.

There is a picture on Reddit right now that shows them both, and I thought people in the comments were trolling, but I blew it off for an hour or so. I came back to it and still they were saying I was "right" all along so I just started searching online. 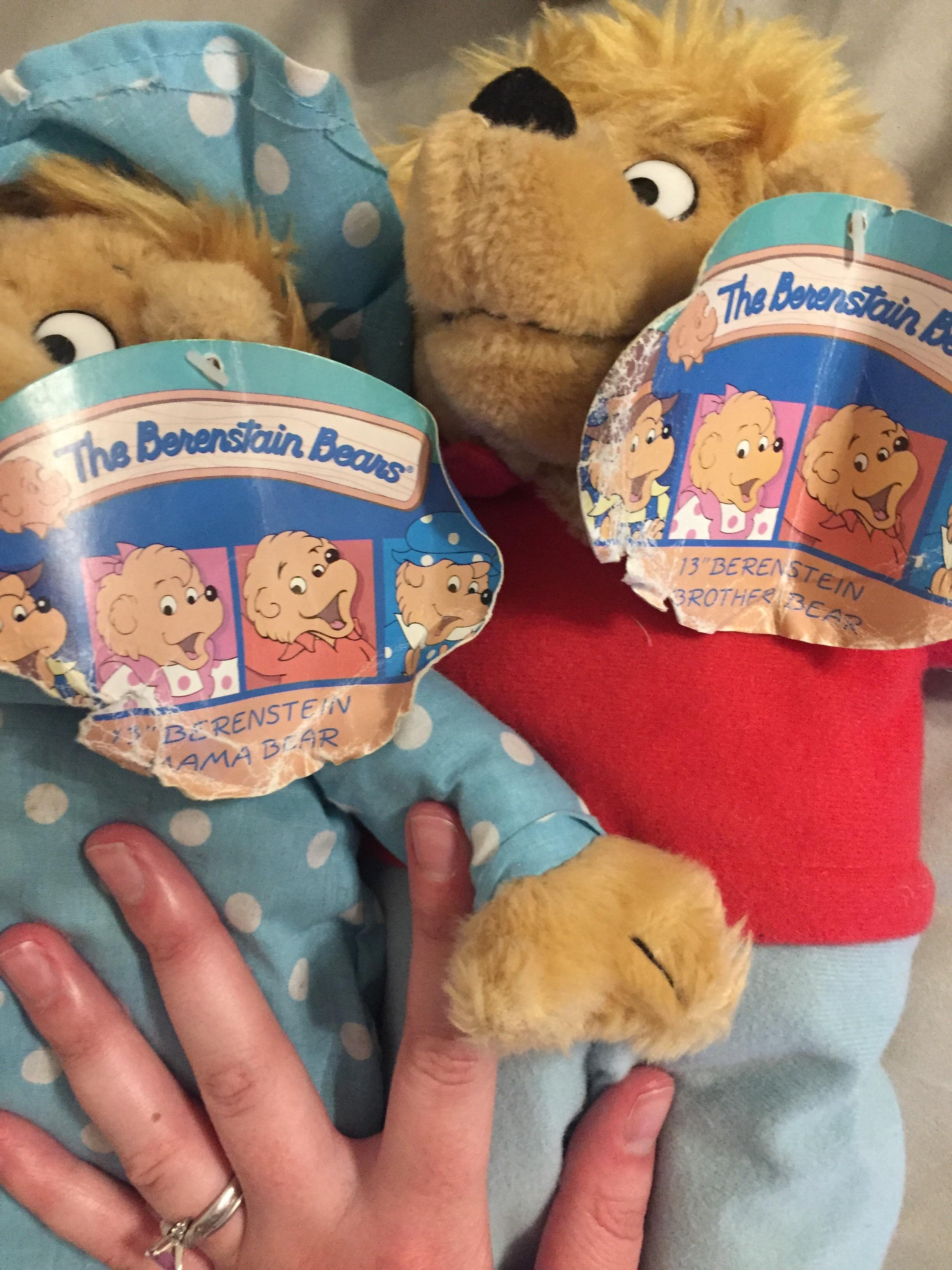 I don't even know how to feel about this. I thought many on here would be interested though, and it will be interesting if suddenly the tables have turned.

Oh well! It was always 'stain'. Though you can find the occasional book or VHS tape where someone spelled it 'Stein' by mistake.


Since Stan and Jan Berenstain are the creators of everything "Berenstain Bears", I'm thinking that anything that bares the name Berenstein, or any other variation of the brand name "Berenstain" is just some kind of cheap knock off, maybe from China or North Korea. Sales from any "Berensyein" brand probably helped fund terrorism!

until just recently (the ATS threads changed my mind) i thought it was spelled 'stein'.

I cannot even comprehend that this is or has happened. Please someone chime in here in my defense and back me up that "we" who remember "Stain" have been made fun of and the butt of all Mandela Effect jokes on ATS for the last 7 years.

I can't even do this.

Has not changed since the first time I saw it.

originally posted by: sputniksteve
OMG this is beautiful. We have officially broken the world somehow.

I cannot even comprehend that this is or has happened. Please someone chime in here in my defense and back me up that "we" who remember "Stain" have been made fun of and the butt of all Mandela Effect jokes on ATS for the last 7 years.

I can't even do this.

Berenstain is and has always been correct. No one has made fun of you if that's how you remember it.

It's 'Berenstein' that's wrong...those are the folks inventing a Mandela Effect to explain their faulty memories.

originally posted by: WakeUpBeer
How have you missed the countless other threads on this?

Oh well! It was always 'stain'. Though you can find the occasional book or VHS tape where someone spelled it 'Stein' by mistake.

The labels on the bears in the picture say both Berenstein (bottom) and Berenstain (top) - this is the first thread I have seen about this.

Anyway, this just goes to show that the confusion about the spelling has gone on since forever.

Yes, it's just proof of how easy it is to mix this up.

Same thing with the NYT archive. You will get a few hits for 'Berenstein,' but there are far, far more with the correct spelling, 'Berenstain.'

This is the quickest proof I could find but I am certain that there is more just in my posting history alone.

Halfway down the first page I mention that I know for sure 100% that STEIN is "wrong". If I was "right" why would I be making the thread, and why wouldn't anyone point out that I was "right"?

I have posts going back 7 years at least of me stating that I am from "STAIN" reality for a lack of a better term, and if I was right all along why wouldn't people have pointed that out during that time?

I am not trying to convince you, I don't care what you believe because you will obviously never understand. This is for the people that will understand precisely what I am saying, and a glorious day it shall be for all of us.

posted on Sep, 17 2017 @ 10:58 AM
link
The statistician Clif High once mentioned in a podcast that the center of this Universe pulsates at 50 trillion times a second and every pulse is a alternate reality.

On top of that, our spirits jump to-and-fro through these 50 trillion versions as well. Swapping host bodies as we jump.

So pick a feeling and let your spirit do the jumping via Law of Attraction.

The kinder you are, the better the reality is, that you swap with. The nasty spirits fall into more miserable versions of this world.

originally posted by: subfab
a reply to: sputniksteve

until just recently (the ATS threads changed my mind) i thought it was spelled 'stein'.

That is good, until TODAY it was spelled STEIN in between being STAIN during the 80's.

Now YOU have to decide if your memory is bad, or if something weird has happened. I don't say that as accusatory, I just can't even believe this is happening.

I don't know why anyone didn't point it out. The person you were replying to alluded to 'Berenstein' being incorrect though.

The Mandela Effect is faulty memory, pure and simple. I have seen nothing to suggest otherwise.

(And, as an aside, are the people who remember Mandela dying, Berenstein Bears, NZ being further north, etc, all the same - do they all remember the same differences? Or are they separate groups?)

Maybe Stain is the family name but you use Stein when referring to more than one member of the family. It's their plural.

You do not understand, and obviously are not capable. I would suggest that is a good thing for you. I am not trying to be rude, but I am not interested in being told what you are telling me right now. This obviously doesn't involve or include you. Again I don't mean to be rude or mean, but I have already dealt with plenty of being told I was wrong, I don't need to be told I am wrong again about being wrong.

YOU DO NOT UNDERSTAND

posted on Sep, 17 2017 @ 11:06 AM
link
Alright, I may be incorrect but if I understand the gist of this theory (ME), it is that people are shifting from one timeline to another. In one timeline, they are the Berenstain Bears. In another, Berenstein. Alright, so suspending my disbelief, we have established at least two realities.

So if you come from the Berenstein reality but find yourself in ours (Berenstain), what the hell happened to the version of you in this reality? Did they shift into the reality you came from (swapping places essentially) or shift into a third, or fourth reality? Are there only two realities?

As for the multiverse.. more than two realities. So does the shifting compound, ad infinitum? As one person shifts into an alternate reality, something must have to happen to the "them" of that reality. Presumably that would be a shift of their own. Which would trigger a shift for the "them" in their new reality.

It gets very confusing thinking about the possible mechanics.

Here's a thread that says it's Berenstein that's wrong: Link

'Berenstein' is the name the ME believers say they remember. Not 'Berenstain.'

You are effectively agreeing that the ME is not real by saying you remember 'Berenstain.'

Yes, it's just proof of how easy it is to mix this up.

Same thing with the NYT archive. You will get a few hits for 'Berenstein,' but there are far, far more with the correct spelling, 'Berenstain.'


Yes - and it can be perfectly illustrated by deliberately misspelling an undisputed word in a search query and watch how many hits you nonetheless get.

Try, for instance "Obamma" instead of "Obama". That returns 241.000 hits, and I bet some of those are written by people who are convinced that their double-m spelling is correct.

I don't have the first clue why or how any of this is happening. I appreciate you trying to speak about this rationally although I am coming off as a manic lunatic.

Let me be as clear as possible. I don't claim to be jumping dimensions or realities, I don't know the cause or effect of any of what has happened. I can only, and have only ever reported what I know to be true.

When I was a child in the early 80's I read books called the Berenstain Bears. I remember it very specifically because because I listened to audio of it at the same time in order to learn how to read. I remember exactly how the narrator pronounced the name.

Some time around 2000 all of a sudden someone pointed out that it was spelled "Berenstein" and not "Stain". Thousands of people online, on reddit, and right here at ATS have been telling me and them that we have poor memories, are lying, or confabulating things. For 7 and a half years, I was constantly denigrated or dismissed by people on ATS for claiming it was STAIN until this very morning when I saw the post on reddit.

Now I am being told that I was somehow always right, and must have been and be confused about what I remember in the intervening time. I can't even begin to explain how much of a mind F this is right now.

I frankly couldn't care less who believes me, or what they think about me. I am just reporting exactly what has happened to me during the last 7 and a half years. It can be taken as fact or discarded as fiction. I don't care either way.

Those are just the facts as I see them.

If you only knew.