posted on Mar, 27 2017 @ 09:26 AM
link
You can see his butt wasn't as tan as the rest of him which would indicate he's not always naked but certainly naked here. The stick he had originally was the one the biker picked up.

I'd say the stumbled across a local indigenous and scared the living # out of him, well assuming he was already caught with his pants down.

originally posted by: Rosinitiate
You can see his butt wasn't as tan as the rest of him which would indicate he's not always naked but certainly naked here. The stick he had originally was the one the biker picked up.

I'd say the stumbled across a local indigenous and scared the living # out of him, well assuming he was already caught with his pants down.

Yes, he seemed just as startled that the first biker crashed. He obviously did not want these four bigger guys to blame him and possibly attack him...so he light-footed it out of there!

originally posted by: CynConcepts
After researching Indonesia, there seems to be 3 well known indigenous tribes there.
Example Image of Yali tribe

I would say that this is not a lost tribal member, but simply one of the member of a known indigenous tribe. Whether Yali, Dani, etc. in the past year, there seems to be a lot of news about indigenous tribes losing land rights etc.

Still fascinating video, but nothing mysterious.

Edit add: just a side note: apparently, the Yali tribe were into cannibalism in their recent past. Egad!


lowland Yali tribe members are significantly different from highland Yali. Men don’t wear rattan skirts, only kotekas. Women don’t wear small four-layer skirts, but long skirts made of grass. It could be hence said that they are not as interesting as the mountain Yali, but the opposite is true. Lowland Yali almost live in isolation and are thus affected by outside influence only to a very small degree. It is fantastic to visit both cultures during one trek. A descent from the mountains to the lowland can be a very pleasant experience, considering that our diet changes as well. The diet of sweet potatoes might change to buamera (pandan fruit) or even sago.

Edit add 3: Image of Pygmy lowland Yal with a much larger Caucasian tourist!

Wow! They are a very small people!!!

Apparently there are people called Mante, that are very secluded?


Jakarta - Spare Mante now become the subject of conversation after the appearance of tiny creatures in the wilds of Aceh. There are a number of areas in the country Rencong ever a silent witness to the emergence of tribal Mante.

Sooooo....Who knows, maybe they are real and that was one?

I think I am going to be satisfied with this is a real video of a member of a well-known but isolated Lowland Yali Pygmy tribe. No need for mystery or myths or cgi skepticism.

posted on Mar, 27 2017 @ 09:38 AM
link
I am going to say cgi, obviously it's ludicrous to suggest that you could ride a dirt bike on a trail and suddenly come across a short man who then runs away into the grass
Because it is an alien, monster or something that ats members are sure is mysterious enough to suggest someone would waste their day cgi'ing a little man running away from a group of possible dirt bike goons
Only on ats?

originally posted by: Raggedyman
I am going to say cgi, obviously it's ludicrous to suggest that you could ride a dirt bike on a trail and suddenly come across a short man who then runs away into the grass
Because it is an alien, monster or something that ats members are sure is mysterious enough to suggest someone would waste their day cgi'ing a little man running away from a group of possible dirt bike goons
Only on ats?


Really?
Only on ATS you say?


Some people do waste their time with CGI.... 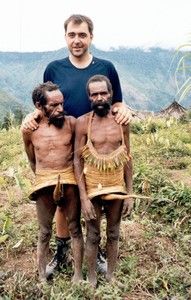 posted on Mar, 27 2017 @ 10:30 AM
link
I will share a story that might be relevant here.
My ex wife is from the Philippines and she owns land in Bicol a province of the Philippines.
One day on the farm her grandfather lived on which is the land i'm speaking about a young pygmy(Negrito) walked straight into his house and ended up living and working there for seven years.
He was a teenager when he arrived and he told them that his tribe lived up in the jungles in the mountains and had no contact with the outside World and then one day he said his goodbyes and told them he will return to his village, after that they never saw him again.
They are most likely still out there left to their own devices in parts where civilized people barely ever tread.

If this was outside Jakarta, any Yali tribesman would be very far from home, since the Yali are traditionally located in Western Papua (which joined Indonesia in 1969 after a somewhat controversial referendum).

I invite you to look at a map. Its quite a distance from the island of Papua to Jakarta. Its not inconceivable that any Yali could go there by plane, but I doubt he would do it just to loiter around in the bush naked.

However, I don't see why we should need to resort to the Yali to explain a small statured human running away from a gang of bikers in the first place. Especially with no clothes on. I would certainly do the same, if I was caught unawares going home from my skinnydip. Humans come in all sizes, and I don't see why this can't just be some local kid who now finds his pale backside plastered all over the internet.

I think the title for the video should more accurately be "Innocent bathing local harassed by biker gang".

So sad the little guy was running scared. How he could have been caught this way is my only question. He would have felt the rumble of the bikes engines against earth, would have heard the sounds of the people headed his way and would have hidden long before they saw him.

A rather large specimine for this type of entity/being. The colors did seem an accurate match for the natural state as they mix with the colors that surround them.

Interesting none the less, however humanity is so far from learning about the natural order of the world we live in and this is a perfect example as to why.

posted on Mar, 27 2017 @ 11:17 AM
link
Not saying this wasn't a real encounter with some remote tribe member or even a feral child. I am wondering how he let those bikes ride up on him so close (and then run away)? He must have heard them coming for a quarter mile.

Thats why you don't encounter wild animals on the trail either. Typically they duck out of sight long before you get there. Humans are the noisiest critters on the planet.

I would have never in my life guessed a 2 year old could move so damn fast. Unbelievable what small beings are capable of.

I don't think it's an alien at any rate. Probably a kid who has good natural instincts that told him to get the heck back home when he ran into the pack of bikers. Or maybe a smaller tribes person. They exist for sure.

Why can't it just be that the naked guy got scared when he saw that he had caused the bikers to seemingly crash? Maybe he thought they would be angry with him for making them crash their bikes. And being all alone and naked to boot, no wonder he took off.

I am not familiar with how minorities are treated around Jakarta, but there is certainly a lot of interracial tension and accusations of all kinds of horrendous treatment of minorities elswhere in Indonesia. So it might be that the only prudent course of action for any member of a minority group would (when faced with a boisterous group of men) would be to run away as fast as you could.

Which isn't all that fast, and certainly not faster than a motorbike. As evidenced by the video, where the poor chap is quite easily caught up with by the biker wearing the camera.

Frankly, I am more than a little surprised that this video is seen to have any mysterious qualities at all.

I just don't see the mysterious aspect at all.

Moves reaaly fast, it's hard to tell but more than likely some tribe member living out there hunting or something.

posted on Mar, 27 2017 @ 11:51 AM
link
Turns out my After Effects is out of date, haha, sorry guys! hopefully someone with the subscription based one can reduce exposure and shakiness so we can take a better look.

AWESOME! And thank you! Ill definitely keep an eye on this thread.
Im suspecting this one is real. I have absolutely NO experience in video forensics, or even videography for that matter. Im just going off what i see hollywood and secureteam10 can do, and comparing them with my normal viewing stare. Lol! Like many of the posters, i also feel this is not a sci-fi like creature. Im leaning towards obscure tribe/feral child. Albeit extraordinary, this theory is still rooted on earth without the intervention of a government. Lol!
Or Aliens.

Thanks for the idea! I can download the vid, then run it through my video editor. I can slow the speed/timestamp down to 1/4 of a second!

Awesome info! If this is a genuine video, id say your second examples skin tone is closest to compare. Not perfect, but similar. I'm not experienced in photography, but i know enough about light, and camera resolutions to know its pretty damn hard to get perfect match.

The reactions from the bikers just don't look like a 2-3 foot tall naked dude carrying a spear snuck up on their friend and made him wreck.

Here you can see this dude is looking down at his friend (quite calmly in the video) instead of being shocked by mini-dude. 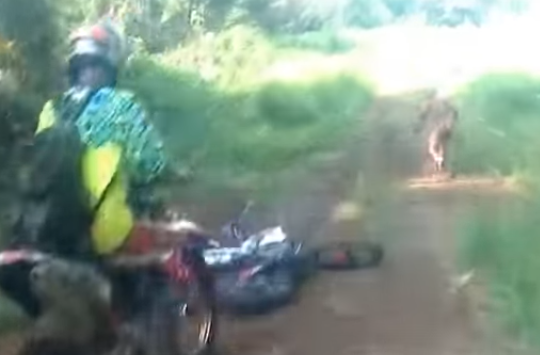 It looks like someone cut out a scene from a movie and put it in the video.

So it might be that the only prudent course of action for any member of a minority group would (when faced with a boisterous group of men) would be to run away as fast as you could.


That was my whole point. He could hear the bikes coming from a long way off, why wait till they arrive to run away, down the middles of the road?

Or he was deaf. Or they staged it.