Are you saying that the information in the IPCC 2007 report that tipping points have not been identified is for polcy makers only and NOT for public consumption?

Are you saying is OK to tell the public we are at "several tipping points" when it is a lie?????


I think I'm actually saying you are relying on your interpretation.


Global emissions of carbon dioxide stood at 32.3 billion tonnes in 2014, unchanged from the preceding year. The IEA data suggest that efforts to mitigate climate change may be having a more pronounced effect on emissions than had previously been thought.

The IEA attributes the halt in emissions growth to changing patterns of energy consumption in China and OECD countries. In China, 2014 saw greater generation of electricity from renewable sources, such as hydropower, solar and wind, and less burning of coal. In OECD economies, recent efforts to promote more sustainable growth – including greater energy efficiency and more renewable energy – are producing the desired effect of decoupling economic growth from greenhouse gas emissions.

"This is both a very welcome surprise and a significant one," added Birol. "It provides much-needed momentum to negotiators preparing to forge a global climate deal in Paris in December: for the first time, greenhouse gas emissions are decoupling from economic growth."

go ahead and explain to me what your "interpretation" is of the text I quoted.

Please point out where it says CO2 emissions have peaked. And explain what you mean by peak.

go ahead and explain to me what your "interpretation" is of the text I quoted.

Let me point out --- you can't seem to tell the difference/acknowledge what Al Gore actually said -- and what Watts actually said.

You seem to only be able to interpret your own viewpoint.

Don't point out what I said. What meaning do YOU take from the text I quoted. How do you compare what the IPCC say to what you read from people like Al Gore on a weekly basis.

Tell me what YOU think?

oh the text I quoted does not say that emissions have peaked. The emissions have stalled in that it stands at 32 billion tonnes ( or so) in 2014 and is unchanged in 2013.

However according to COP21 agreement, it says that we have to keep emissions below 40 tonnes in order to avoid global temperature increases that exceed 2 degrees.


17. Notes with concern that the estimated aggregate greenhouse gas emission levels in
2025 and 2030 resulting from the intended nationally determined contributions do not fall
within least-cost 2 ˚C scenarios but rather lead to a projected level of 55 gigatonnes in
2030, and also notes that much greater emission reduction efforts will be required than
those associated with the intended nationally determined contributions in order to hold the
increase in the global average temperature to below 2 ˚C above pre-industrial levels by
reducing emissions to 40 gigatonnes or to 1.5 ˚C above pre-industrial levels by reducing to
a level to be identified in the special report referred to in paragraph 21 below;

Considering that we still have a ways to go before we reach 40 gigatonnes and that population is expected to fall drastically by 2030, I think there is room for optimism here, don't you?

Especially when you consider that China and India are retiring old, polluting coal burning plants and buidling new plants with modern pollution controls.

There is barely any manufacturing left in the America's.

I have very clearly stated very plainly that I understand that there is a difference in the words but you can't seem to understand the practice of paraphrasing and exaggeration to make a point.

Now I have asked you for your interpretation of the IPCC text and you have implied that I am mistaken. Either give me your interpretation or simply go away. It is very easy to sit back and criticize - why don't you jump in and start thinking for yourself. That is what a debate is.

I give you my opinion and you give me yours.


Considering that we still have a ways to go before we reach 40 gigatonnes and that population is expected to fall drastically by 2030, I think there is room for optimism here, don't you?

I would agree that the current data on emissions is encouraging. But why do you say that population is expected to fall drastically in the next 15 years?

. . .you have implied that I am mistaken.


write about this every now and then, because human fertility is falling faster then most demographers expect. Using the CIA Factbook for data, the present total fertility rate for the world is 2.47 births per woman that survives childbearing. Last year it was 2.50, and in 2006 it was 2.90. 2.10 is replacement rate. At the current trend, the world will be at replacement rate in 2022. That’s a lot earlier than most expect, and it makes me suggest that global population will top out at 8.5 Billion in 2030, lower and earlier than most expect.


The world is changing rapidly but one thing history has taught us - its that economic growth results in a drop in fertility. India is a big problem but when they finally get their power grid up and running it is clear that India will become an economic powerhouse. Same with China.

Also - baby boomers will be shuffling off the planet by then.

If nothing else, it is clear that population growth rates are falling rapidly.

You are now officially avoiding the question. Go away. Its clear that you only wish to district and have nothing to add to the debate.


and that population is expected to fall drastically by 2030,

You are now officially avoiding the question. Go away. Its clear that you only wish to district and have nothing to add to the debate.


Whatever dude. I said it was your interpretation. Which it is.

The subject, Global Warming, has more twists and turns then a Rubik's Cube, but is not rhe subject of this thread.

Your original point was about something Gore said. Which he didn't.


Possibly the strongest ever. As in - ever. We'll see - it's still early. They say climate can have an effect on El Nino

Besides, if you haven't been listening to Phage, climate change is not weather (unless the weather is currently supporting the theory of climate changes.

As usual Phage does an excellent job of explaining things. I think he says climate is not weather - but climate can affect weather

I'm sure he'll correct me if I'm wrong
edit on 1/2/2016 by Spiramirabilis because: (no reason given)

It's a matter of averaging. Climate is an indication of average weather conditions. It is a more a statistical concept than anything.
The climate of Los Angeles:
www.rssweather.com...
This doesn't mean that the weather is always like that, but on average it is.

When the averages change, that means the climate has changed. So it is actually weather (over an extended period) which determines climate. What this means in terms of global warming is that warming will change weather and therefore the averages for various locations will change in various ways.

To be clear - I have been listening very carefully to global warming theorists since the 1980s, just before Jim Hansen testified to congress.

I do not support the theory of global warming due to anthropologic sources.

The various planks for global warming theory are generally this:

1. That the CO2 emissions can raise temperature on a planet wide scale just like it does in a greenhouse

Possible but not likely. Greenhouses don't have oceans, solar winds etc. Just because it happens in a laboratory does not mean it happens on a grander scale.

2. That proof of global warming is that there is currently no explanation for the rapid rate of temperature change.

Except that rate of temperature change was high for a very short period of time. Compare the global tempature for 1990 with the global temperture in 2014 and you will see what I mean.

3. That there has been no change that affect global temperature except the CO2 emissions.

ok but what happened from 1940 to about 1975. There is another alternate explanations. Change in ocean oscillations that perfectly explain the global temperatures for the last 120 years and are now expected to cause global cooling. The Pacific Oscillation has already changed to its cool phase and many scientists are now predicting global cooling for the next 30 years.

4. That the Medieval Warming Period was a regional rather than global anomally such as we see today.

Except it wasn't. Recent studies of pacific and antarctic ocean sediment cores show that the MWP was in fact, a global event.


I may be wrong but at least I have put a great deal of thought into it.

Further, the way in which the global warming theory has been presented to the public has all the hall marks of a scam. When someone starts using fear as a selling tactic, well, lets just say if you have to use fear, you are not a very good salesman.


Further, its funny how when the world was cooling in the 1970s, governments thought the cure was to use taxes to reduce particulate discharges.

The world was not cooling in the 70s. A few scientists made that claim.

Please show evidence that governments thought the cure was to use taxes to reduce particulate discharges.


Where is that heat going to go if not into the atmosphere?
Did global temperatures show a cooling trend after the last strong ENSO event? I think not. Why would this one be different? It was a spike in a trend, as is this one. 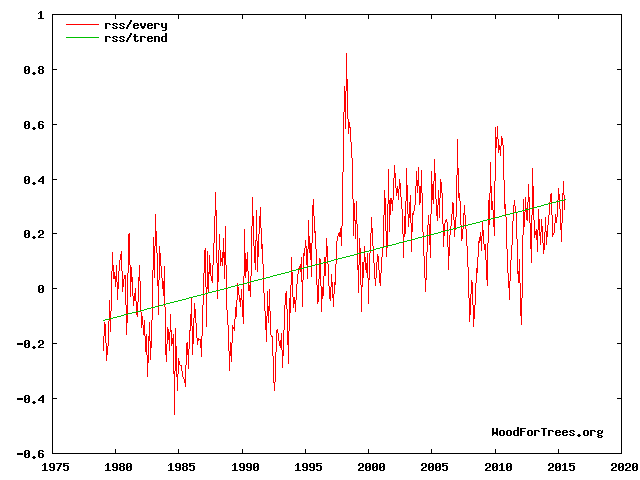