On January 25th, 2006, while at the Sundance film festival, screening “An Inconvenient Truth”, Al Gore said this as chronicled in an article by CBS News:

The former vice president came to town for the premiere of “An Inconvenient Truth,” a documentary chronicling what has become his crusade since losing the 2000 presidential election: Educating the masses that global warming is about to toast our ecology and our way of life.

Gore has been saying it for decades, since a college class in the 1960s convinced him that greenhouse gases from oil, coal and other carbon emissions were trapping the sun’s heat in the atmosphere, resulting in a glacial meltdown that could flood much of the planet.

Americans have been hearing it for decades, wavering between belief and skepticism that it all may just be a natural part of Earth’s cyclical warming and cooling phases.

And politicians and corporations have been ignoring the issue for decades, to the point that unless drastic measures to reduce greenhouse gases are taken within the next 10 years, the world will reach a point of no return, Gore said.

He sees the situation as “a true planetary emergency.”

“If you accept the truth of that, then nothing else really matters that much,” Gore said in an interview with The Associated Press. “We have to organize quickly to come up with a coherent and really strong response, and that’s what I’m devoting myself to.”

Well, the 10 years are about up, by now, warming should have reached “planetary emergency levels” Let’s look at the data:

Please provide a source showing exactly what Gore said, in context. I dislike forming opinions based on what someone says about what someone said. Especially when it's Anthony Watts.
edit on 1/2/2016 by Phage because: (no reason given)

posted on Jan, 2 2016 @ 03:26 PM
link
a reply to: ChesterJohn
Please provide a source showing exactly what Gore said, in context. Not a couple of sentences. Not paraphrased.

originally posted by: Phage
a reply to: ChesterJohn

Please provide a source showing exactly what Gore said, in context. I dislike forming opinions based on what someone says about what someone said. Especially when it's Anthony Watts.

Here you go, I found the original quote

Many scientists are now warning that we are moving closer to several "tipping points" that could — within as little as 10 years — make it impossible for us to avoid irretrievable damage to the planet's habitability for human civilization. In this regard, just a few weeks ago, another group of scientists reported on the unexpectedly rapid increases in the release of carbon and methane emissions from frozen tundra in Siberia, now beginning to thaw because of human caused increases in global temperature. The scientists tell us that the tundra in danger of thawing contains an amount of additional global warming pollution that is equal to the total amount that is already in the earth's atmosphere.

posted on Jan, 2 2016 @ 03:55 PM
link
It should be called saving mankind. The Earth will march along with or without humans.

So, if I may paraphase: he was relaying that scientist had said that it was possible that in "as little as 10 years" a tipping point "could" be reached.

Somewhat different from this paraphrase:


Well, the 10 years are about up, by now, warming should have reached “planetary emergency levels”


Yes, where is that guy..
Hello Randyvs


The researchers found that Arctic soils containing low carbon content — which make up 87 percent of the soil in permafrost regions globally — not only remove methane from the atmosphere, but also become more efficient as temperatures increase. During a three-year period, a carbon-poor site on Axel Heiberg Island in Canada’s Arctic region consistently took up more methane as the ground temperature rose from 0 to 18 degrees Celsius (32 to 64.4 degrees Fahrenheit). The researchers project that should Arctic temperatures rise by 5 to 15 degrees Celsius over the next 100 years, the methane-absorbing capacity of “carbon-poor” soil could increase by five to 30 times.

turns out that the earth is already to deal with green houses gases in the event that temperature rises!

Does the IPPC know about this

originally posted by: markosity1973
a reply to: Phage

Is there legitimate documentation on that?

Just gonna say: there are a LOT of maybes in that Princeton article.

It has done that before it is nothing new to Texas, DC or anywhere else.

Weather is not predictable.

posted on Jan, 2 2016 @ 04:50 PM
link
Is that you, Jim Inhofe? Still trying to convince everyone that global climate change is a hoax? 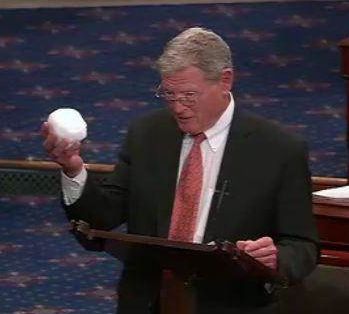 Do you need a scientist to tell you in a special study that the earth is still turning, that it is still hotter in summer than in winters, that mammals are still breathing and breeding

Al Gore is still around - still being a hypocrite and still profiting both from the global warming scam and fossil fuels.


Jon Stewart: “Can you see how people at home might think — but he’s asking me in my life to make choices about light bulbs and a cost-benefit analysis for the purpose of sustainability when I just want to see my book. That’s the issue.”

Al Gore: “I’m very, very comfortable with it. I completely get the criticism, but this was a good choice and the net benefit for the U.S. is going to be very positive.”

Yes, Al Gore appears to be very comfortable in selling out his principles for a $100 million profit. And at least he “gets” the criticism. He disagrees that it is hypocrisy, apparently on the basis that he doesn’t like the word hypocrisy.

Stewart highlighted the fact that Gore could have made a statement about his principles, but at the end of the day Gore determined that the cost-benefit analysis benefited him enough to be comfortable with taking fossil fuel money.

What Al Gore did was to sell his Current TV Network to Al Jazeera for 500 million. Al Jazera is funded by Qatar. Where is the hypocracy. Al Gore complains and criticizes oil companies for having to great an influence on tv.

Al Gore has a new book out that he was on tour, The Six Drivers of Global Change.

So Al Gore did a cost benefit analysis and chose the benefit over the cost. But he wants us to do without fossil fuels to heat and cool our homes even though the cost is greater for alternative sources. He wants us to reach into our cookie jars to keep the lights on while he pockets a hundred million.

What a hero (sarcasm here)