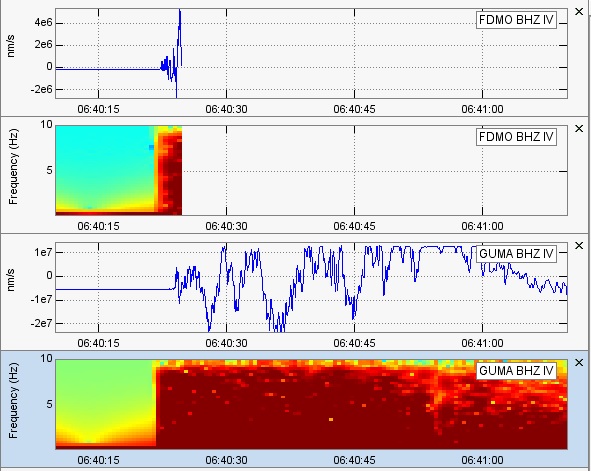 That's from the 6.6 in Italy. The first two are the waveform and spectro of the station that got killed. It was pretty close to the epicenter. You can see the P-wave come in and start into the S-wave, but it was just too much to handle, and the signal goes *poof*- gone.

The second two are the waveform and spectro of a station still pretty close, but it withstood the shock, even though it still clipped. In looking at the data around that area, the amount of aftershocks are incredible. They are constant, and continue as we speak. Most are small, in the 3M or less region. But that fault is seriously agitated, and I would not be surprised, given the pattern of increasing magnitudes of the larger ones, if more larger ones are on their way in the upcoming days/weeks.

The last time I saw a fault behave like this, with such insane amounts of aftershocks was in Chile. It almost looks volcanic in nature, they are coming in so fast.

Well, that answered my question.

Now could you please fix your picture, I am all excited to see this pic, and Poof its gone???

Thank you for that reply muzzy.

I popped onto the thread without going back.

I just placed those 391 on a map, they are spread over the same geographical area as the rest of the Visso 5.4,5.9 series, with a lean towards the southern part,
so its not another shift of energy, just more.

Maybe the world won't end. The Chicago Cubs need to come back from the dead first.

At least this is what I was thinking up until a minute ago. I was trying to kill time because I will soon enter battle with the government. So, I was browsing earthquakes. I even tried not to think of Italy and Turkey. I noticed South America had a few. And then, I had to be fool and check the thing I have been checking every day now. The thing I've been checking has been shut off I think. Then today, Halloween, I get a chill when I see what I see. The muther frackin earth crackin' maniacs are at it again.

The Salton Sea Geothermal Plant will cause the big one. Today, I check, and the swarm is back. And, it's so obvious that it is the plant. It is absolutely, directly, underneath. Not off to one side or another a few kilometers nearby. No, it is directly, absolutely, underneath.

Meaning, it was quiet because they had shut down the plant after the last swarm. Or, they decreased pressure. Today, they must have started pumping again at increased levels.

What scary prank to pull on Halloween!

WOW LOOK AT ME
I learned something. I just saved a screeshot and uploaded it. I'm so old. This internet computery stuff is pushing memories out of my head as it fills with all these details, and devices.

Oh, on this image, the darker shaded area is the Geothermal Plant. 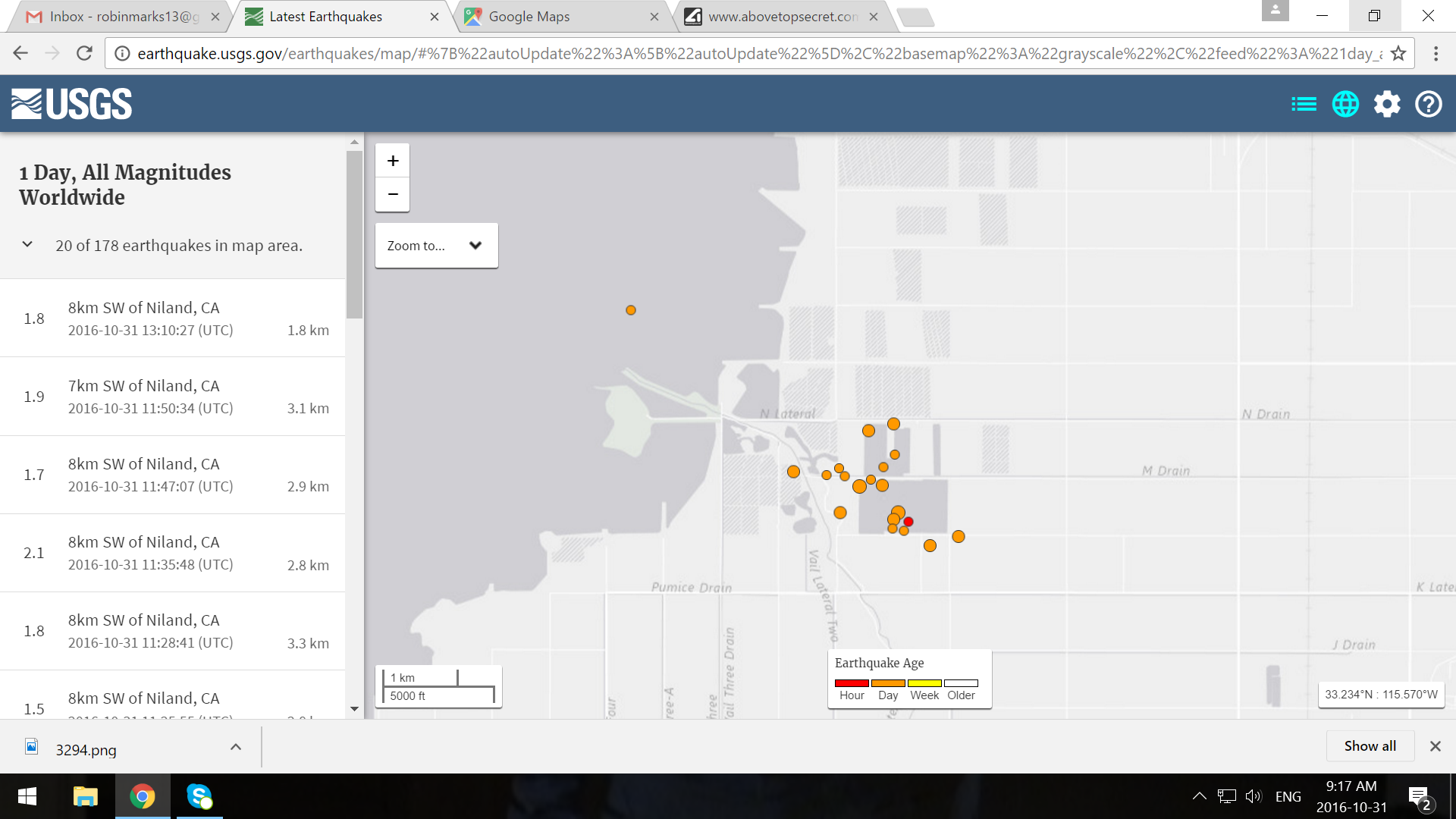 posted on Oct, 31 2016 @ 12:33 PM
link
a reply to: ericblair4891
That's OK I think I found the vid that explained it, although I didn't understand what the guy was saying, it was all psychoanalyst type talk, over my head.

Congrats on the picture screenshot and loading up to ATS, its not that hard really eh
Images certainly save a lot of typing.
I often wonder how many I should load, it must take up a lot of bandwidth for ATS.
I have mentioned a few times to the PTB here that they should allow to show images stored elsewhere, but it just seems to fall on deaf ears.

The only problem with your theory about Salton is The Geysers, which gets dozens of small earthquakes every day from Fracking geothermal, for as long as I have been looking, yet they haven't had a big quake yet.
The only difference, which might be the game changer, is the fact Salton is so close to the San Andreas.
edit on 1000000030430416 by muzzy because: (no reason given)

the last 3 days had respectively;
28th-599
29th-541
30th-545
but who is to say there were not more, I have already established that NIED technicians seem to be on a quota system
perhaps 600 a day is it for Tottori
they are diminishing in magnitude size though

posted on Nov, 1 2016 @ 02:22 PM
link
Little project I'm doing (on another rainy day here) is comparing some bigger earthquake aftershock sequences around the world,
the inspiration came from the recent quakes in Italy and the triggering effect that is happening.
this has happened before here in NZ
Canterbury 2010-11
Cook Strait NZ in 2013
Fiordland 1989-2003
Weber 1990-1

I know that the geology might be different in the various places, I'm putting in Turkey, California and Japan as well for comparison (I'm convinced that the SW off Kyushu triggered the Kumamoto quakes)
this may take a while, I started with L'Aquilla which I gathered data for 8.8 months, so I need to go back and get longer term data for some of the others.
Many were cut short by the next big quake in the sequence, such as was the case with Accumoli into Visso then Norcia, but it's still interesting to see the numbers.

FWIW one new bit of info when I was updating the data was that the Cook Strait M6's of 2013 have be reviewed and the magnitudes have changed;
previously it was 6.5 and 6.6. Latest update shows M6.4932 and M6.4687 respectively, so the energy released by the first one was more @ 82,849.643TTNT (2nd one was @ 76,131.0508TTNT)
This is where accuracy is important, those Networks that just use one decimal point do us a disservice, and distort the energy measurements. On the face of it with one decimal point we had two M6.5's but with more digits we have a difference of 6718.5922 Tons of TNT, not something to be sniffed at, equal to a M5.77 quake alone, which is significant, apart from the fact the two 6's are reversed in size, making the 2nd one an "aftershock" of the first.

here is my table so far, there are plenty more I can add yet
rightclickviewimageifyouareonadesktoporlaptopforfullsizedimage

I have been trying to think of the word that described the termination of one sequence and it is replaced by with a new one. The closest I can find is the word "vicariance" which means "the division of a widespread group of organisms by a geographic barrier, such as a mountain range or a body of water, often resulting in the evolution of related species on either side of the barrier."
But that's not really it in relation to these seqences, as the division is caused by something new happening
anyone got a better word?

posted on Nov, 2 2016 @ 12:47 PM
link
a reply to: muzzy
The numbers at Tottori from the m6.6 are just staggering
at the 11 day elapsed time mark there have been 10,379 aftershocks
At the 7 day mark there had been 8,188, the only other big quake that comes close is Mexicali 2010 which had 7,045 at the same mark, but of course Mexicali was a 7.1Mw. Kumamoto, Kyushu, which seemed a big series only had 3,342.
It has become necessary to split the data in two maps, as NZ Topo just cannot cope with that many icons.
The first map on the page in the link now shows the most recent data, older data (the first 10,000) as well as the cumulative numbers breakdown and timeline graph are further down the page.
The M6.6 and the largest aftershock a M5.0 are shown with a gold star for reference.
Eastern Tottori 6.6 of 21st Oct 2016 and aftershocks
I haven't done an update on Kumamoto for a while, it's still going but I have noticed on the daily Japan maps I make that the density/volume is decreasing. It is still a significant series, at the 22.5 week mark when I did the last update there had been 19,281 aftershocks since the first quake, the M6.5. I will do update that now.

posted on Nov, 4 2016 @ 04:30 AM
link
Muzzy and Puterman, you are both cordially invited to comment on this one, because I believe you might be able to help.... In a nice way please, as I know none of us much here believe in this:

See my reply in your thread please.

This style of thinking is just wrong.

It is really annoying!

I have been trying to think of the word that described the termination of one sequence and it is replaced by with a new one. The closest I can find is the word "vicariance" which means "the division of a widespread group of organisms by a geographic barrier, such as a mountain range or a body of water, often resulting in the evolution of related species on either side of the barrier."
But that's not really it in relation to these seqences, as the division is caused by something new happening
anyone got a better word?


got it
the word was "superseded"
New Table

posted on Nov, 6 2016 @ 01:47 AM
link
further to: muzzy
When I was doing the Table comparing quakes I thought I better bring some of the series mentioned on the table over from Wordpress to Blogger, as the maps no longer work there since the Feb 2015 Google decision to no longer support KMZ files.
In doing Cook Strait I decided to take the data out to 6 months, and also thought to check the main shocks.
What made this series unique was that it started small 5.7 and ended big 6.6.

This is interesting as I felt both, the first one I was outside standing in a car park, we swayed a bit but it wasn't too bad.
the second ( now smaller they say) I was in the house and the floor was heaving up and down like the ocean.
FWIW the 2nd one was further away, but 7km shallower.
Just goes to show how hard "intensity" is to measure, especially those old pre Richter scale (1930's) earthquakes quakes where intensity reports is all they have to go on.

Ya don't normally see earthquakes in this neck of the woods.

They downgraded to a 5.0 Cushing, Oklahoma.