Yes fairly sure that will be the case. I will keep it spinning in case I manage to get a slot.

posted on Nov, 13 2016 @ 07:08 AM
link
Just woke up and hearing the news about NZ quake. Also said there was a Tsunami Warning as a Tsunami has been generated. No link...Just what my local news said. Stay safe Muzzy!!

Just a question, as always.
I noticed Muzzy had reported on Lake Taupo rattling around a bit earlier this week.
1. Could that have triggered this down some sort of event?
2. As these quakes are moving in a NE direction...they are heading towards Lake Taupo....are they like a possible 'backdrafft' effect up a 'tube'/fault so to speak? 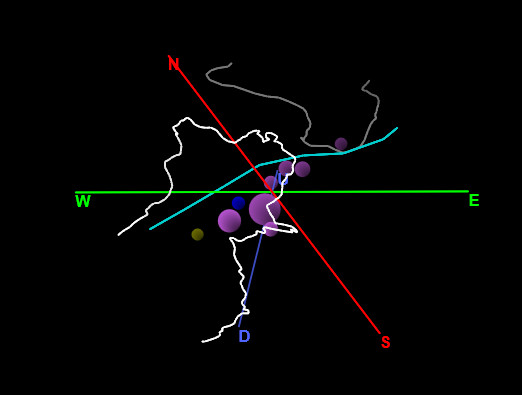 Yes North east for the main quakes although on the map for M5 it looks like North South.

You can just see Taupo in the GE image I posted so not they do not appear to heading in that direction.

Did Taupo trigger this? Whilst it is within the trigger distance (for M6) I don't think the events at Taupo were sufficient to create this instability.

Thanks for answering that. I was wondering the same thing. At work shouldn't be on my phone. Lol.

I'm glad you brought up the moon first. I didn't want to say it was the moon- but...
Glad your safe.

If the epicenters on this USGS map are accurate, the "line" of quakes seems to be pointing toward your location, Muzzy. 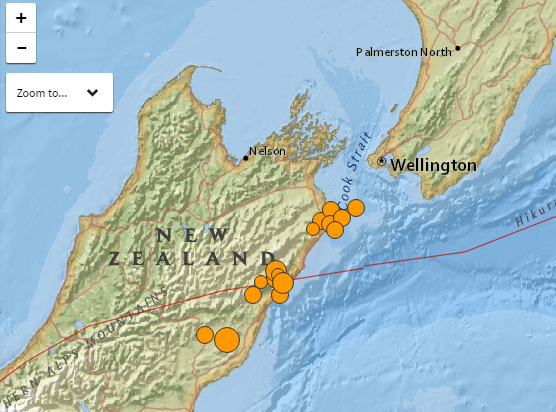 Is this a case of slip on several different parallel faults; such as the Awatere, Clarence and Hope faults?

posted on Nov, 13 2016 @ 11:16 AM
link
So
Good morning survivors
In the light of day;
M7.6 officially Geonet
First thing is Kaikoura is cut off by road
Just had a big Air Force helicopter fly over our house heading south
Tsunami warning has JUST been lifted
Cook Strait Ferries are shut down
CD (Civil Defense) saying don't go to work in Wellington today
Wellington suburban rail is shut down
People in Christchurch evacuated inland and in evacuation centers (understandable given their recent history there)

I did go to sleep at 1:45ish so didn't feel any further aftershocks, the power came on around that time, good job on the part of the power guys.
When I woke up and put the TV on at 5.50am they were going on about the Tsunami warning and a 7.6 quake and I thought chit was there another one?
The investigation begins

Two minutes!!! Jebus! That sounds scary because it built over time.

And very early in the morning. 2011 is still in everyone's mind.

I hope there is no major tsunami.

posted on Nov, 13 2016 @ 12:49 PM
link
Initial summary of the aftershocks
13 Nov 2016 NZ
Looks like more than one fault broke
the main shock is at the south end out on its own (this often happens with big quakes)
the two M6's near Kaikoura (explains the damage there)
Clifford Bay off Seddon seems to have reactivated or at least taken some of the energy and released it
3rd area the Orongaronga's across our side of Cook Strait 5.3+some3's
a 4.8 in the hills behind us (less than 10km away)
then a trail of M4's up the west coast and centre of the North Island

It will be interesting to see if these far field (North Island) one stand investigation, as they may well expose the weaker faults in the NI

posted on Nov, 13 2016 @ 01:00 PM
link
I have noticed every time there is a big Earthquake somewhere that the internet slows to a crawl when using wifi , i have noticed this over the last 4-5 years any one else notice this

posted on Nov, 13 2016 @ 01:03 PM
link
a reply to: stonerwilliam
thats due to volume of traffic, even wifi comes through cables at some point