Thanks for that info.

Some work for the weekend

I know its not a race, but Tottori at that point of elapsed time was at 2965
of course NIED are collecting below M1, which INGV ISISDe are not, so just counting M1+ Tottori was at 1880

Just observing a bit up an uptick around Alaska. Also, South America is waking up after a long sleep. It's been relatively quiet. I expect something big coming up along the spine of the America's. This is just the opening act so I really don't know where the story will go yet. Remember, the biggest earthquake in the world was South America. Followed by Alaska. In the past few years, both have had some really big ones. Chile, Ecuador. Alaska. But it might be my feeble brain, But the last really big Alaskan was a year ago? And the Chile 8.8M? god I'm old, and forget dates. i'll check wait, they had an 8.3M last year in September. Since then, the biggest is Ecuador at 7.8M. Man that was big. So. South America is due. Central America shut off after a mild uptick not long ago. In general, kinda quiet .

I just wanted to add in here that I am watching a storm system tango-ing off the coast of Central America, that appears to be U-turning back towards Central America-- this is exactly like the one I watched over month ago, right before the Salton Sea started head-banging.

We haven't had much rain in LA for, oh, a million days give or take, but it's coming down HARD this morning. This particular weather is supposed to last a few days. At which time I believe that Central American Dancer will be due to side-step it back towards northern Mexico/just south of the Salton Sea.

I've got my Bugout Bag ready- times 6, because my kids are big enough to grab their own. If the Big One hit before election night....do you think we'd have time to get in a couple new candidates for our voting fingers?

Maybe Chile is due right now. We had Ecuador. Maybe if it's South America, it's way down at the southern tip. Maybe. But, I was thinking of our moon. It's a apogee, and new. Then I wonder British Columbia, and it's slipping. Nah. anyway. Something big is coming real soon. I only thought about B.C., because of rain and pressures. They've had lots and lots of everything lately on the west coast.

If Alaska pops off a moderate, meaning, (6.4ish up to 6.9M maybe) (relative for Alaska), then I'd worry more about the west coast.

Oh, and, I think we're nearing the end of the world. I have evidence. I wouldn't just scare monger or make stuff up. But. The Chicago Cubs will most likely win. The curse will have been reversed, And the goats will reign on the earth. America citizens are having to choose between two evils. And, within a year, there will be a full eclipse over Yellowstone and the magma chamber.

And since it's Halloween, watch some spooky movies.

Kubrick is best. But things in this order. Netflix has Room 237. Then go to the Library and get The Shining, Torn Curtain, (Hitchcock), and 2001: A Space Odyssey. Insanity is the greatest horror.

When Hal is being shut off. He sings a song. The song was not an accident, nor coincidence.

He saw the horror.

Oh, I forgot sumthin. The last film, should be, "How I Learned to Stop Worrying and Love the Bomb." After all, you'd need a laugh. And could be funnier, than Slim Whitman, riding a nuclear bomb to initiate the end of the world.

map of them all so far

BTW if you are using the Google Earth Gadget, when you double left click on an icon the map will zoom in to the location at about 3km above in 3D mode. I have no control over this, it must have been set by the guy who hacked the code to reproduce the Gadget.
I like it.

You would need a timeline graph to see if they were getting closer together lately, probably not, 539 years is a long time (6 lifetime's or more) so the average is probably bunched up at some points, like the lower ones (6's and low 7's) being aftershocks of the big ones (8+)
I'll have a look after a coffee.

Man, dang, Hillary is giving a live news conference. anyway, what is going on around the Europe? Another one near Italy. Something is up there for sure. Turkey, around Greece, Italy, and if I remember right, North Africa awhile back. hmmmm

I can't do the 539 year Chile graph, Excel doesn't recognise pre 1900 dates
pretty dumb eh.
I'll dig around and see how you do it.
Also hard to pin down that Chile "9.5"
It depends on who you accept as the correct magnitude
ISC International Seismological Centre says it was only 8.7
but on conversion to MW went tp 9.6
Its the oldl story I have been moaning about for years, how can you compare a 1471 earthquake in Ms to a 2010 one in Mw?

A further 565 aftershocks at Visso overnight (my time)

posted on Oct, 29 2016 @ 09:19 PM
link
a reply to: ericblair4891
I watched the video. Its not really what I meant though, having read the Arthur C Clarke sequel 2010 : Contact I knew what the monoliths were about.
I watch a couple of other 2001 vids on utube as well, but still in the dark as to what the room with the bright floor was about and how Dave aged and was reborn.
Sometimes things are exactly what they appear to be.
Science fiction.

Gualdo is right in the middle of the aftershock area, at least they still have internet connection, or at least cell towers are not out

I just saw this headline break out. Italy is really getting it lately with these eq's . Heres hoping people are managing ok out there.

posted on Oct, 30 2016 @ 02:35 AM
link
a reply to: worldstarcountry
Yeah for sure!
We get plenty of quakes here but the strongest one I ever felt was when I was in Italy, everything is made of stone there and there is no flexibility in their structures.
EMSC is changed to 6.5Mw now
also INGV changed to 6.5Mwp

a selection of new comments on their site;

Witness location : Porto Sant'Elpidio (Italy) (70 km NE from epicenter)
Worst I've felt ever... even my husband who was outside was knocked off his feet. We were seriously scared this time

posted on Oct, 30 2016 @ 04:27 AM
link
Its not all Italy though
bit of a swarm in our North Island this morning SW of Rotorua, near Guthrie.
Its all volcanic through there between Rotorua and Taupo
I almost missed the Geonet graph for the nearest seismo at Tarawera, being late in the day before I got around to it. 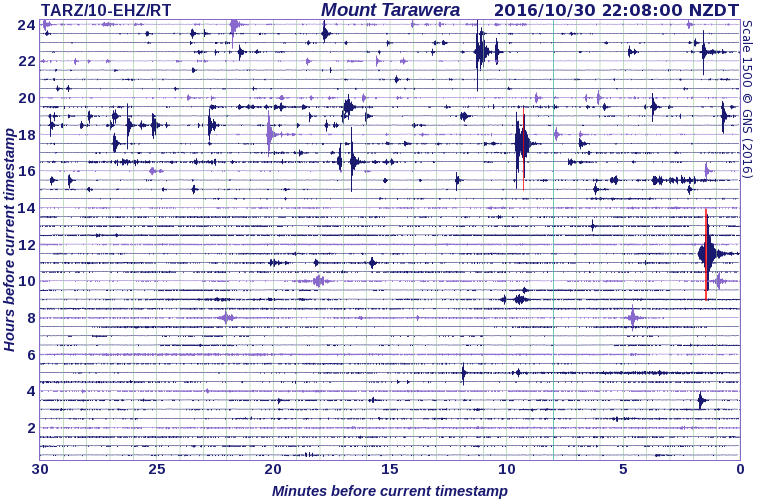 With the "Unzipping" of this fault, would you expect more 5+ Quakes?

posted on Oct, 30 2016 @ 06:28 AM
link
Was this recent quake in Italy an aftershock? I have had a busy week and not sure if there was one bigger than the 6.6 recently or not. I know they have been having them and had a 6.1 a few days ago but this one is bigger than the last.

so the 6.5 is the Mainshock
technically speaking the first 18,000 quakes would be foreshocks to the 6.5 because that is the biggest one in the period
but I think this is more like triggering

And all these are subsequent to l'Aquila 6.3Mw in 2009
they all link up, like the fault is unzipping northwards