To all here, keep up the great work and Happy New Year!

Thank you muzzy for getting 2016 Quake thread going.

It's gotta be you or puterman. You two are the best.

posted on Jan, 1 2016 @ 02:01 PM
link
No problem, its really just about being an anchor, and keeping the thread ticking over.
Not sure where P'man is at, MIA for quite a while.
He does pop in occasionally if there is a big quake.
I think we all miss him.

My 2016 ATS resolution ............. save more graphs.
I often forget to save the LISS graphs when a decent quake hits, it is partly due to USGS taking them offline for over a year, I kind of lost interest then. They can be valuable to get an overview of the shear scale of an event. And off course they flip over within 24hrs, so if you don't save them, they are gone forever. I have a whole bunch saved from 2011 and 2014, not so many in 2015. They may come in handy if I ever get EQ Archives back on track.
The IRIS graphs are useful too, but again you have to be on the ball, 9 days seems the rollover time, before they are gone. I used those for the 2nd half of 2013 into 2014, while LISS was offline.

both are shown on the graphs below;
rightclickviewimageforfullsize 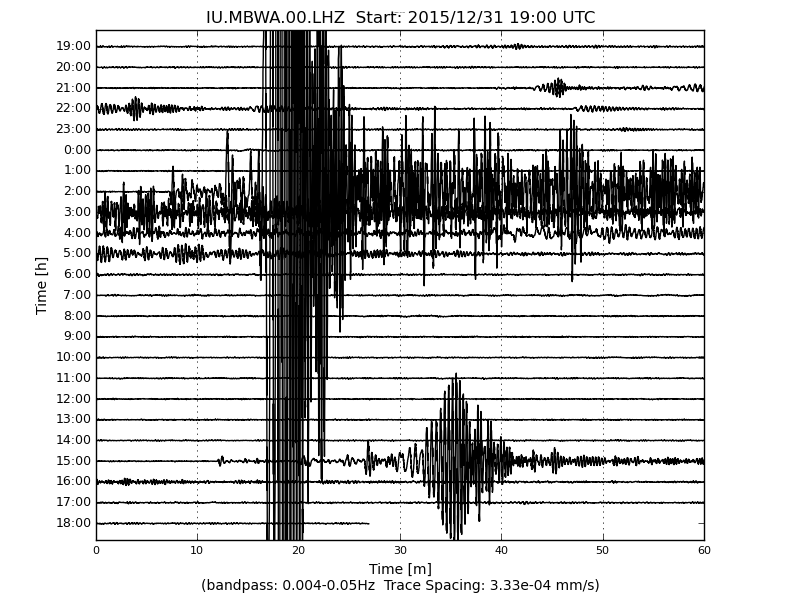 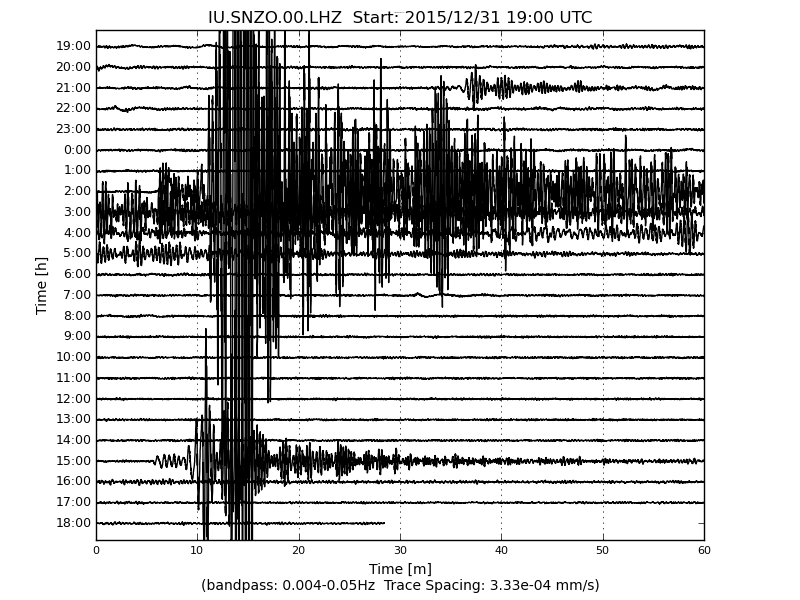 and surprisingly the Western Indian Antarctic Ridge 6.3 showed quite strongly in Port Moresby PNG, a long way off 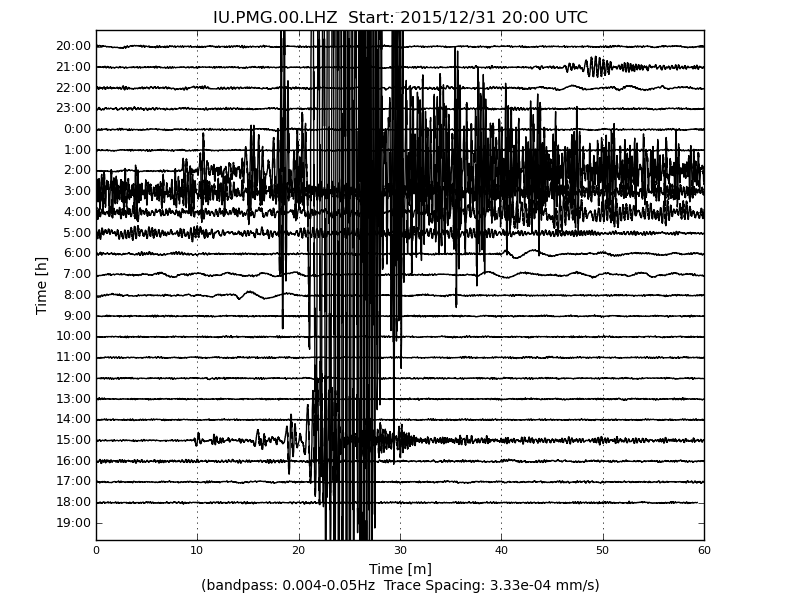 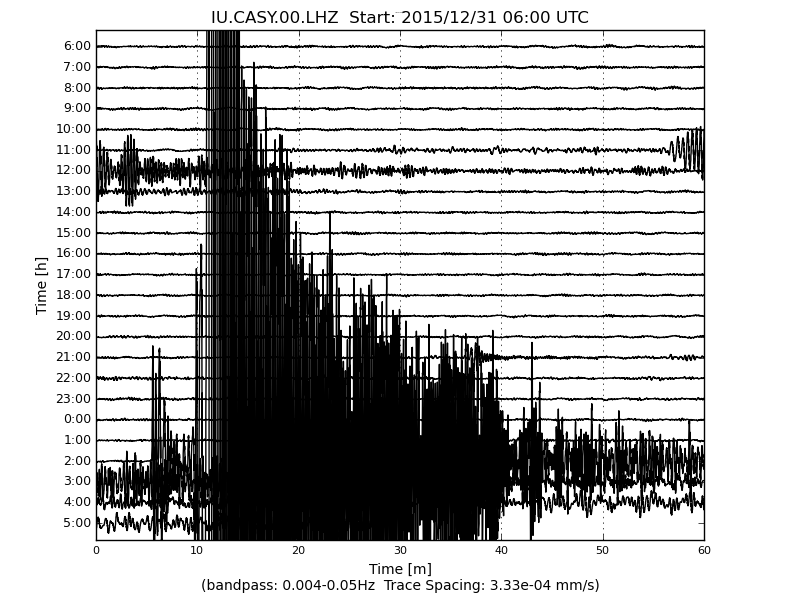 and a later one(as I type) 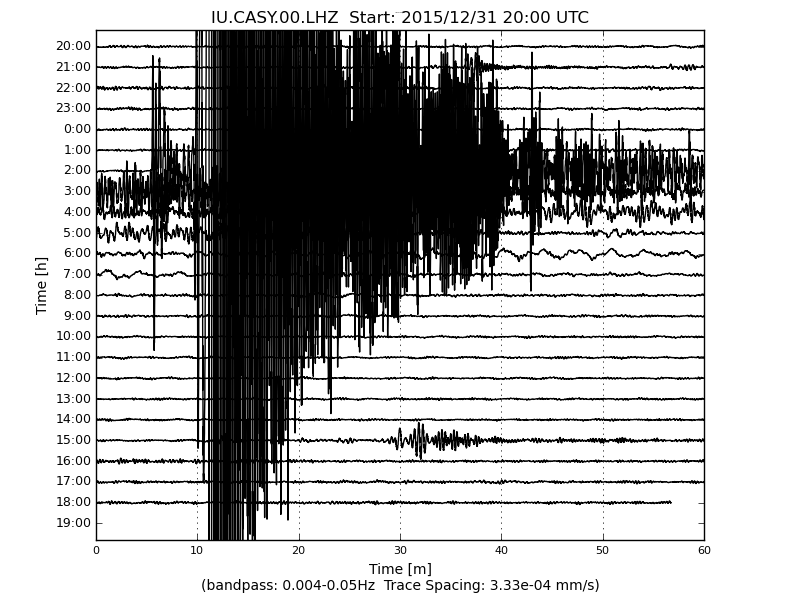 Thanks muzzy for starting, this year will prove to be a biggie in this thread. 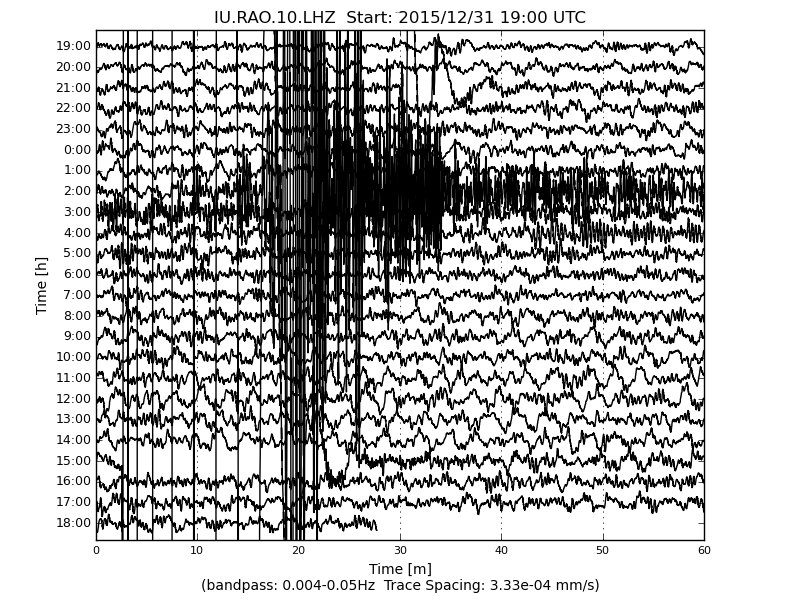 but IRIS Raoul Island shows it quite clearly 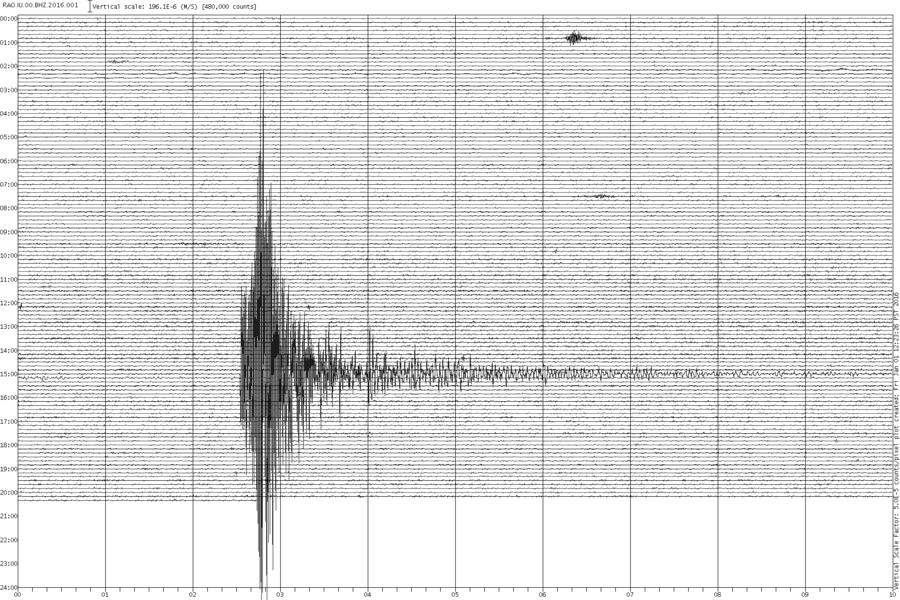 another example/comparison, the Western Indian Antarctic Ridge 6.3 again,
quite clear on LISS;

but because it is a long way from CASY (2,385 km) it shows as a undefined wiggly line 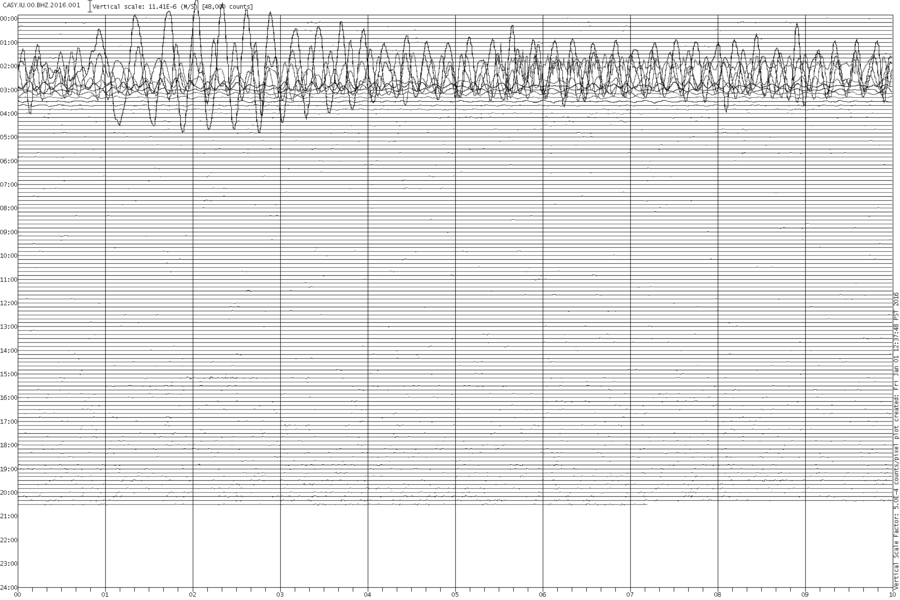 So LISS is good for distant quakes, IRIS for closer quakes

(Seismic lurker here)...adding kudos to Muzzy and good wishes that all is well w/Puterman.

Hoping 2016 is all low magnitude stress releasing shakers around the world with nothing "big" occurring.

posted on Jan, 1 2016 @ 05:05 PM
link
While I don't speak much in Quake Watch anymore, it is my home here on ATS. This is where my family is at. Thank you Muzzy for leaving the lights on and cooking dinner for us. 😄 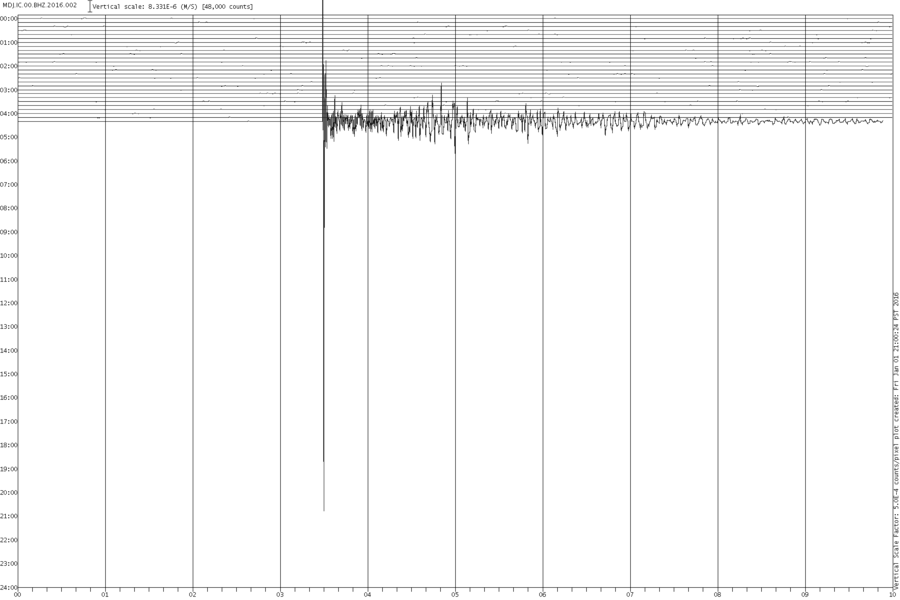 posted on Jan, 2 2016 @ 12:28 PM
link
a reply to: muzzy
again, as mentioned re the Western Indian Antarctic Ridge and Kermadec Is quakes,
LISS doesn't show much from stations close by,
Mudanjiang (MA2) which is 38.08 km away from the epicenter (link above about to expire) showed this 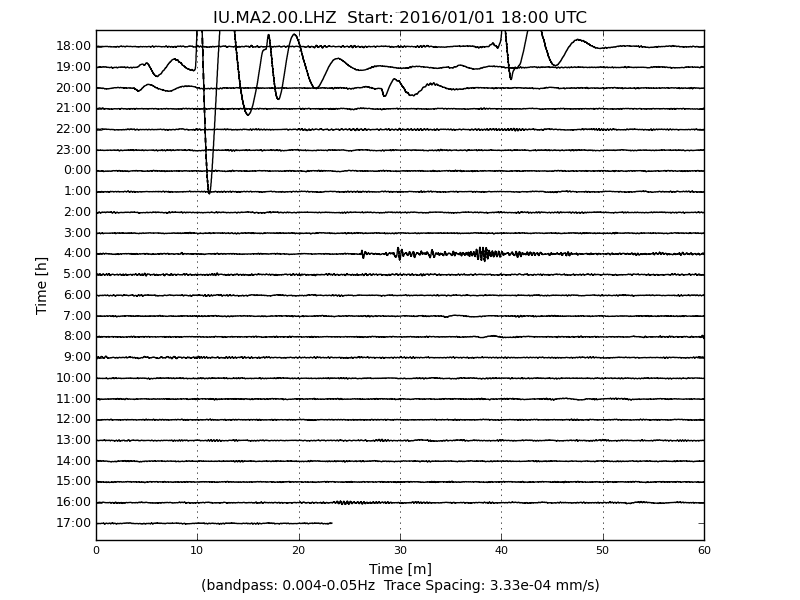 but further away, like HIA, (Hailar Station , Neimenggu Autonomous Region) 921.6 km from the epicenter
it looks more like the IRIS trace 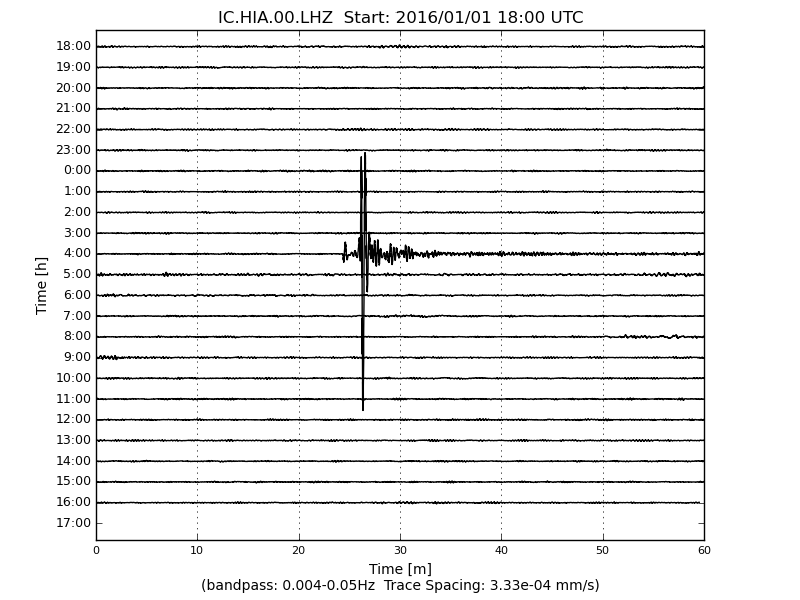 Just keeping an eye on Northern Nevada. It`s chimed in with another 4M, and the swarm is vigorous. In the last seven days, there`s been 127. Other swarms I`ve observed have came and went without big earthquakes, just as Muzzy suggests. Other swarms that ongoing are induced. These earthquakes are the energizer bunny, they just keep going and going. I thought the San Romos ( I think I got city name wrong-California) swarm was flaring up again last week, but then it fizzled. The Reno swarms have come and gone without a "BIG" one.

Yellowstone had a tiny swarm. Or it was ice cracking. Or, the staff that list stuff is still on holidays.

posted on Jan, 3 2016 @ 02:59 PM
link
We've sure had a bunch here in Oklahoma in the last yr. Was very surprised to read that Ok has had more earthquakes in 2015 than all the other states combined, excluding Alaska. We also set a record of 30 quakes over 4.0 in a yr.

No one ever talked about quakes when I was growing up here. I'm sure fracking has had a little something to do with it.

Oklahoma makes me sad. It's a disaster.

There's just been a 6.7M in Eastern India.

Also, Northern Nevada is still keeping on keeping on with more today. About 32 now.

That Nevada stuff, it was 32 earthquakes for 24 hours. Now, it's 56 for the last 24 hours. I'm sure someone may have just added a bunch when they manually observed the graphs. However, it does seem to be ticking upward.

posted on Jan, 3 2016 @ 09:46 PM
link
The earthquake in India, near the border with Myanmar has claimed 4 lives and injured at least 100. The damage to buildings is extensive.
From earthquake-report

I hope the rescue efforts are able to continue without enduring dangerous aftershocks.

The weather there seems steady. Hopefully the temps won't drop any lower

Sorry wrong link at first.
edit on 3-1-2016 by crappiekat because: (no reason given)

Article on NZ Herald. A geonet seismologist mentioned it is on the Subduction plate apparently


Dr Fry said the quake's depth put it in the subduction "slab" of the Pacific Plate that underlies the Australian Plate at the boundary of the two tectonic masses.

"It's in the subduction zone but it doesn't appear to be in the megathrust area, which is the huge fault that separates the Pacific and Australian plates -- it looks deeper than that, which is good."

What do you think Muzzy? Did you feel it at all? There were a few felt it reports out Wellington way.