A father and son have been found living in the jungle more than 40 years after they fled US bombing during the Vietnam War.

Ho Van Thanh left his home village with his baby son Ho Van Lang in 1971 after a mine blast killed his wife and two of his children.
The pair apparently survived by foraging for fruit, lived in a timber treehouse and wore loin cloths made from tree bark. The authorities were alerted after locals searching for firewood spotted the men deep in the forest in Quang Ngai province's Tay Tra district. A team was set up to look for the pair - now aged 82 and 41 - and found them after a five hour search.
When found, Ho Van Thanh was too weak to walk and had to be taken out of the jungle on a stretcher.
The father could speak a little of the region's Cor language but the son only knew a few words.
The pair have been checked by doctors and a decision must now be made on how to reintegrate them to society.
Ho Van Thanh is believed to have lived a normal life in the hamlet of Tra Kem, but fled into the jungle after the explosion that decimated his family. 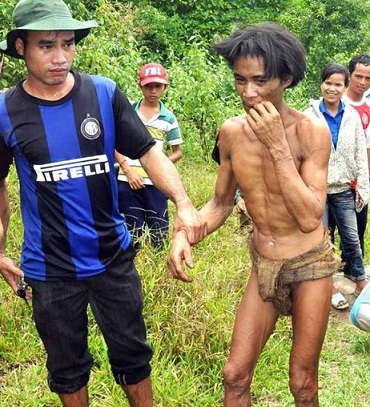 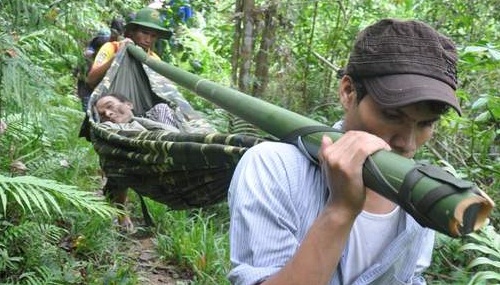 Aw poor guys! What a shock to the system it must be, especially for the son. I think when he realizes what a state our world is in outside his jungle then he may want to return.

I do think it is good tho that there is still parts of the world where in this day and age it is still possible for those with the necessary skills to go off the grid if they feel they have to, and for 40 years, those guys were thought to have grown their own food and even cultivated tobacco. 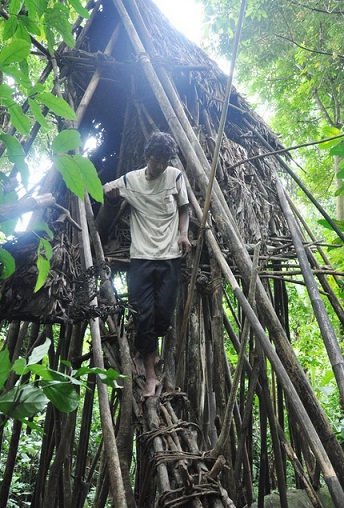 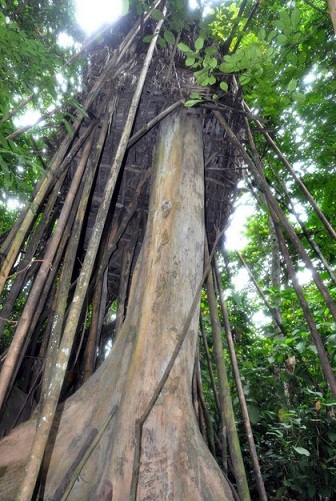 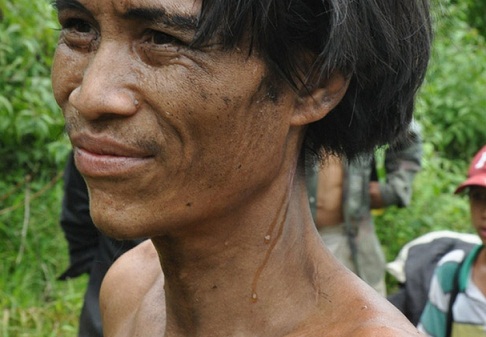 I say the dad is a fool. Or has a mental condition.

Didn't even try to get information on the condition of his country.

The US dropped millions of tonnes of bombs on Vietnam, Laos and Cambodia during the war, which ended in 1975 with the fall of Saigon to North Vietnamese forces.


Who can blame him for running screaming into the woods?


It's not surprising really if the dad did have a 'mental condition', he had just lost his wife and two children in a mine blast. so im guessing yeah he was pretty messed up about it.

I say the dad is a fool. Or has a mental condition.

Didn't even try to get information on the condition of his country.


Is this story for real?

If this happened to your state for over a decade, what would your "mental condition" be?

posted on Aug, 9 2013 @ 11:24 AM
link
i have heard of this a few times in my life a japanese man was found still fighting the war in the late 70s but you have to feel sorry for the son at 41 it is going to be impossible to get back to society not ever having seen it .

These poor people, robbed of 42 years of their lives because the US likes to flex its muscles

posted on Aug, 9 2013 @ 12:40 PM
link
Actually you have to look at the things that was left behind to the things that were found. No more the rigors of trying to forge out a life under the very watchful eye of the government. No taxes because no money. Their lives were of the very simplest kind. Survival was the task of the day, not worrying if lived up to the systems rules.
I spent almost 2 years in the high mountains and it gave me a whole new aspect of what life can mean. My biggest fear was to being captured by the forest service assholes. That really became a game with me in the end. You could hear them miles away and simply just disappear into the woods for a while and watch them.
The animals of the area became familiar with me and then I was just another part of the land. We lived in harmony with each other. Alone in the Wilderness was a docu about a man that wanted to see if he could live for one year in the mountains alone. He went up at 53 and at 85 he decided he needed to go back.

I would almost bet that he will want to escape back to his "home" soon.

posted on Aug, 9 2013 @ 12:45 PM
link
LOL check out the little guy in the backgrround, wearing an FBI hat. Damn look at that guys body, not a single bit of fat on him, and he looks to be in good condition. Reintegrate?? Hell let them decide for themselves, maybe not the oLder one, but the younger one seems able and fit to last another 20 years out there.
edit on 9-8-2013 by Glassbender777 because: (no reason given)

Originally posted by kingears
Poor people, robbed of 42 years of their lives because the US likes to flex its muscles


Well said! I wish them well

posted on Aug, 9 2013 @ 03:34 PM
link
I think they'd be better off left alone. How on earth are they going to adapt to this mad evil world that we live in?
Notice how high they built their tree house? Looks like there's some nasty forest beasts they were concerned about.

Put them back and set them free!

posted on Aug, 9 2013 @ 04:16 PM
link
Surprising, since all it takes out there in the jungle is to get bitten by a certain venomous snake (forget the name) and you're dead in under 20 seconds. My dad called them "2 step Charlies" because after bitten you had enough time to take about 2 more steps and you were dead.

Originally posted by kingears
S+F for the thread OP.

These poor people, robbed of 42 years of their lives because the US likes to flex its muscles

The man made the decision to flee into the woods. That is not the fault of the US. His family was killed by a mine blast...not a B-52 strike.

The mine could have come from either side. But nice try to assign blame. Noone takes responsibility for their actions anymore. It's always somebody else fault.

My grand mother would come home every few months with a "rescued" dog. What that meant was, she took a free dog captive. It isn't like we live in the big city.

People, too. If you don't want to be a part of the society at large, you are deemed abnormal and commited for evaluation. They force you into our zoo, whether you like it or not. You are a captive of society.

They force you into our zoo, whether you like it or not. You are a captive of society.


Yah, just look at what they are missing.

They lived 42 years without a doctor...


Damn look at that guys body, not a single bit of fat on him, and he looks to be in good condition.

Yea, I was thinking that too. Lean, muscular, not malnourished, seems to be in good shape.

Society has a lot of advantages too, but it doesn't seem like these two really needed that. I am sure that at first it was because of the war. But why would they stay unless life out there was better than life in society? Maybe Dad decided that this was the way for him.

The son didn't know any better and needed the father to survive, and from what it looks like was taking care of Dad because the old man was no longer able to care for himself.

I don't know about their integration back into society. Might be a long road for the both of them, and dad might not survive it. Especially if they start pumping him full of western medicine.

Originally posted by heathwithnoteeth
why did they need to be 'reintegrated' seems like they were surviving ok...

other then lack of women I bet they had a pretty peaceful existence until Dad got to old and need health care.


I remember when the Japanese guy was discovered living like that a few years ago. War can send some people off the deep end in which they simply don`t care anymore and just want to be left alone.

Stories like these make me more Anti-War than I already am.

If this happened to your state for over a decade, what would your "mental condition" be?


Sorry but if the U.S. had conducted unrestricted B-52 strikes the war would have been over in a month.