Earthquakes similar in magnitude to the 2004 Sumatra earthquake could occur in an area beneath the Arabian Sea at the Makran subduction zone, according to recent research published in Geophysical Research Letters.

"Thermal modelling suggests that the potential earthquake rupture zone extends a long way northward, to a width of up to 350 kilometres which is unusually wide relative to most other subduction zones," says Gemma Smith, lead author and PhD student at University of Southampton School of Ocean and Earth Science, which is based at NOCS.

"If the sediments between the plates are too weak then they might not be strong enough to allow the strain between the two plates to build up," says Smith. "But here we see much thicker sediments than usual, which means the deeper sediments will be more compressed and warmer. The heat and pressure make the sediments stronger. This results in the shallowest part of the subduction zone fault being potentially capable of slipping during an earthquake.

These combined factors mean the Makran subduction zone is potentially capable of producing major earthquakes, up to magnitude 8.7-9.2. Past assumptions may have significantly underestimated the earthquake and tsunami hazard in this region." 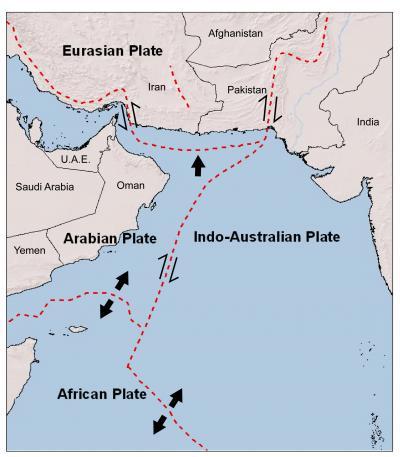 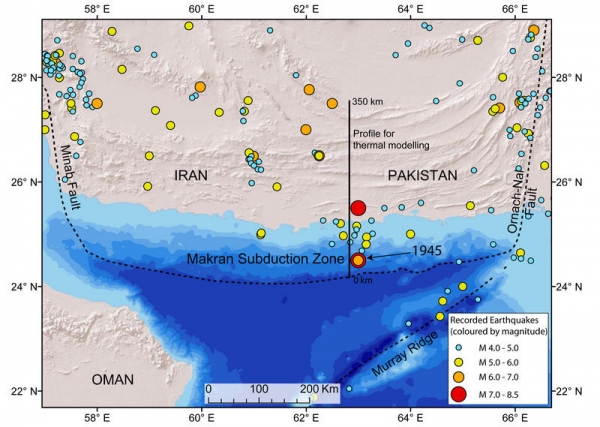 I'm always game for seeing a catastrophic disaster. And it looks like the odds of that just got a little bit better.
Definitely something to keep an eye on to say the least.

I don't remember ever hearing about a tsunami threat to the area around that part of the globe, it would seem that no where is safe.

Do you have any type of opinion on this?
It is kind of part of the whole thread posting thing, to provide information then your point of view and/or opinion...

I have read alot of your posts, and you seem very knowledgeable in this area. What are your thoughts on this?


If you ask me about possible magnitude, I think this subduction zone is not capable to produce earthquake stronger from M 8.5 ..

Also probably we will have soon some more stronger activity in that area ..

It's very interesting for me to read every new information about eartquekes especially about mega eartquekes, anyway many times I share the same ..

Here some recent eartquekes in that area ..

Here is tsunami modelling and its hazard assessment performed for the Makran subduction zone at the northwestern Indian Ocean .. 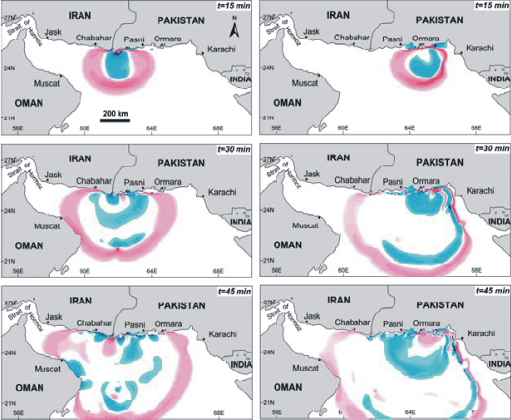 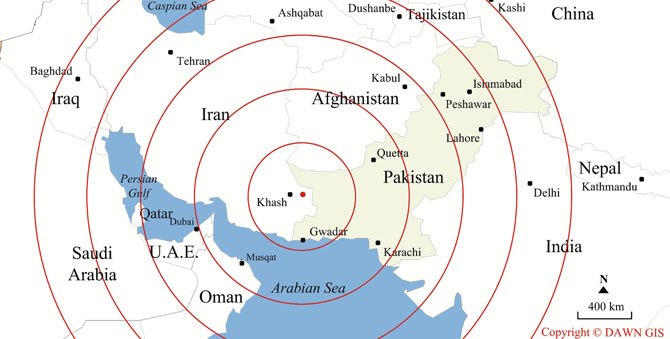 posted on May, 13 2013 @ 05:01 PM
link
In a book I read called 'We Are The Earthquake Generation' by Jeffrey Goodman Ph.D; a decade of cataclysm is predicted. The sequence of events are:

1. Major tidal/tsunami wave and earthquake will first hit India.
2. After a short time major portions of Japan will go into the sea following earthquakes and tsunami.
3. About this time, Mount Vesuvius in Italy will have a major eruption brought on by a violent earthquake
4. This activity in Vesuvius triggers a volcanic eruption in far-off Martinique's Mount Pelee
5, Several years after the start of this sequence beginning in India, the San Andreas fault will rupture.

Who knows in this book they used Remote Viewing, Cayce, Nostradamus and others. This finding just reinforces the beginning of the sequence and that it is plausible as it says this is where it starts and was never considered as a threat before.

I have not read the book but I'm sure going to do ..


It is a very old book 1978 but i think they got their timeline wrong, they were predicting these events for the 90's but a decade here and there in the history of earth is hardly significant. i think it is the sequence that is the key. So the sequence is supposed to cause a tsunami especially on the east coast of India,

I believe this would line up with the prediction that these new findings are showing?
edit on 13-5-2013 by whatnext21 because: (no reason given)

About Vesuvius - Italy that's little strange to me but we will see, I would rather say next is San Andreas fault rupture ..

"If" Vesuvius get strong earthquake and eruption this is how I see things ..

Think that's last two events will probably happen in much shorter time period, guess in some days differences not in some years ..

Also if you have some more interesting to share about this events from the book pls do I will be very thankful, probably will be hard for me to find that book ..
edit on 13-5-2013 by MariaLida because: (no reason given)