posted on Jan, 22 2007 @ 10:40 AM
link
Did anyone hear the radio interview that Jeff Rense and Peter Davenport did with a United aircraft taxi mechanic? If memory serves me right, this witness said that he saw the object while taking an aircraft to the hangar. It was still there when he was on his way back to the terminal close to 20 min. later. So depending on when people first saw it, the time that elapsed could have been anywhere from 2 to 20 min. He also said that when it took off it shot up through the cloud cover and left a hole that you could see through for several minutes until it filled in again. I don't remember if it was straight up or otherwise. He was a very believable witness and I caught no inconsistencies at all while listening to him.
I have searched on rense.com for that interview to listen again but I cant seem to find it on a site search. rense.com is what led me to this website and is a great website if any of you haven't done so you should check it out.
On the work front, I have been asking everyone from managers, supervisors, to ramp workers if they know of anyone who was working that day that saw something and I am still being met with alot of " No, I don't know anyone", or someone makes a joke. In all fairness I work a different shift than the one that the incident happened on, but I didn't think it would be this hard to find somebody, anybody to tell me what they saw. I did speak to a couple of afternoon people too. I guess the company can get away with scaring people to silence.


On a side note, I have a co-worker who spoke to the T.V media about the mood at united when we were going through our bankruptcy nightmare, and he let upper management have it right on tv. He was not very flattering to say the least. He did this with pilots, flight attendants, mechanics all passing on the reporters offer to speak out their opinion. When he spoke all of their jaws dropped. They couldn't believe he was talking to the media. Anyway, the piece airs and he is immediately called into the office for an investigation. The first thing they make you do is write a statement about what you said, did, or witnessed. So all he writes on his statement is " THE FIRST AMENDMENT" " FREEDOM OF SPEECH", etc. all over the paper. When the supervisor reads it he had to call World Headquarters to presumably speak with someone from the legal dept. After going back and forth with him just repeating what he wrote on the paper and them asking "What do you mean by what you wrote", and all he answered with was the same thing, "FREEDOM OF SPEECH" and "FIRST AMENDMENT", they finally told him just to go back to work and never do it again.

Question for any lawyers out there, can a company rule supercede a right granted to you by the Constitution of the U.S and the Bill of Rights. ?
My friend expressed his opinion to the media. Aren't RamagentX and his fellow witnesses just doing the same?
They are not revealing company secrets,nor endangering Homeland Security. How can they breach a rule, if the company and the FAAare saying the object does not exist?

I won't give up searching for someone who saw something. I know a couple of pilots. Maybe I will ask them if and when I see them.

posted on Jan, 23 2007 @ 12:19 AM
link
Question for any lawyers out there, can a company rule supercede a right granted to you by the Constitution of the U.S and the Bill of Rights. ?

More like "question to those who took law in high school or have a little bit of common sense."

A company can make whatever rules it feels like making, however if the rule breaks a law then you can take them to court and you will win. If a law is unconstitutional then you must go to the supreme court, something the average person cannot afford.

Your buddy barking "first amendment, freedom of speech" like a broken record will do no good. If he is not allowed to discuss what he sees at work then he can legally get fired for breaking an agreement he made upon signing his contract. Its like someone working on a new top secret fighter jet, going to the media, telling them all about it and then when the supervisor asks them about it yelling "first amendment, freedom of speech" like a parrot that learned a new phrase.

I cant see your buddy getting far in the company he works for behaving the way he does.

posted on Jan, 23 2007 @ 10:46 AM
link
I just thought of a solution that may be able to satisfy the descrepancies between eyewitness testimonies.

From what I've read so far, we have reports that it was there for 2 min, a report that it was viewed and then still there 20 min later, as well as two conflicting views that the object went in different directions.

Now assuming the timelines aren't set in stone, who's to say the object wasn't there hovering and shot off to the east ... then CAME BACK for the second go-around with the rats whereupon it shot up into the clouds and left the "hole". Take 15 min or so in between "sightings" for the object to disappear that first time and you have satisfied every eyewitness to date.

That being said, I have no idea what times (if any) the eyewitnesses stated in their testimonies. Then again unless you specifically looked at your watch, can you say with any certainty that event X which you witnessed 2 months ago was at time Y?

Originally posted by pegasus1
How can they breach a rule, if the company and the FAAare saying the object does not exist?

I mean c'mon they have craft floating about the terminals, presenting a potential risk to the public, whom they serve, and yet they cast doubt on their own employees and belittle the risk factor!

This is backward behaviour and they should not be allowed to run an airport when they don't value public safety very highly, all they care about is profits! 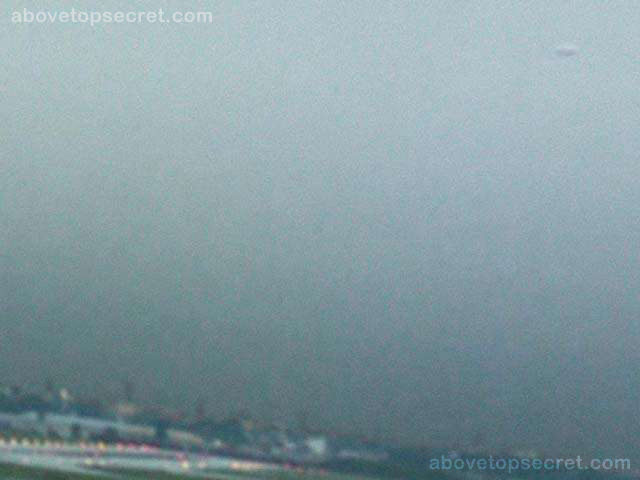 I'm going to put it into an editor and see what i come up with.

posted on Jan, 23 2007 @ 07:43 PM
link
Interesting - we finally have a photo.
I'm not a debunker, but I think we have to take all photos presented here with a big grain of salt. It's been months since the original sighting and thats plenty of time to come up with an authentic looking fake.

Originally posted by zeeon
Interesting - we finally have a photo.
I'm not a debunker, but I think we have to take all photos presented here with a big grain of salt. It's been months since the original sighting and thats plenty of time to come up with an authentic looking fake.

I just had a quick look at it and the object's quality seems consistent with the rest of the image, meaning that it doesn't look like its been put in. Take it in mind though that i'm far from an expert... i just look at the pixels.

posted on Jan, 23 2007 @ 07:53 PM
link
I wonder at what relative position the photographer was at? He appears eleveated in the photo, as if looking down upon the airport? I'm not at all familiar with o'hares layout or twlight/nightime lighting, but maybe some people who live in the area and figure out what / where the lights are in the photo?

posted on Jan, 23 2007 @ 08:33 PM
link
one thing ill say, is if someone was trying to fake it (with 2 months preparation) im guessing it would turn out clearer than this.

this thing also looks exactly like an M&M too - which is what atleast one o the witnesses said.

can anyone confirm its o'hare in the photo? im not from the US

EDIT:
contrast enhanced: dunno if this will help, but here u go

posted on Jan, 23 2007 @ 09:11 PM
link
I'm kind of dissapointed in the slow response to this photograph. People have been asking for this thing for weeks now - and here it is - and all we have in the last hour or so is 3 replys. I thinks that kind of sluggish if you ask me...

Originally posted by zeeon
I'm kind of dissapointed in the slow response to this photograph. People have been asking for this thing for weeks now - and here it is - and all we have in the last hour or so is 3 replys. I thinks that kind of sluggish if you ask me...

Try putting it in a new thread with a title that mentions a photo of alleged O'Hare incident. I'm a member here and I just happened to find this photo through an off site link!!!

It needs it's own thread!

Every image taken with a digital camera contains EXIF data. This data tells you what type of camera took the picture, and additional details about the picture. So I ran Microsoft's Photo tool against the original and here are the results:

I was disappointed when I saw no original date on the photo and no camera info. I have a brand new Samsung Blackjack so I took a photo with it, and ran the same tool against my picture.

No date, no camera info. What does this tell us? Not much, other than to say the picture was more than likely taken with a camera phone as your source suggests.

That is some good info. Thanks for that! I never knew that about pictures and the information contained in them. Atleast the information you have helps suggest, as you said earlier, that it was most likely taken from a camera phone.

Is there any way to tell if this has been edited with any software such as photoshop / paint shop pro - etc?