The ABC Preon Model. Not the Top Quark. Preons.

posted on Apr, 3 2017 @ 07:20 AM
link
This is the twelfth thread in the series on the ABC Preon Model. Links to earlier threads will appear in the comment below.

There is one experimental result where it may at first seem that the ABC Preon Model fails, and that involves the experimental evidence for the top quark. In fact, the abstract of the original 1997 publication ended with the final sentence "The model does not require the existence of the top quark." In this thread we will explore the meaning behind that final sentence, as well as present powerful additional evidence for the existence of preons. 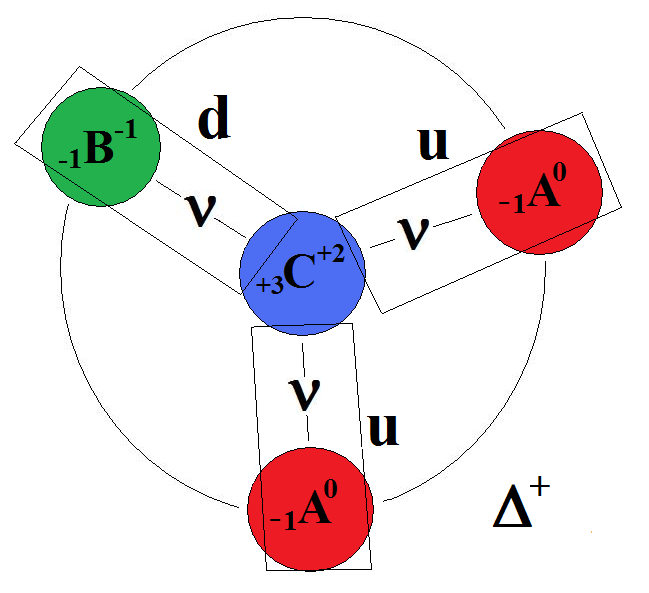 Above we recall our earlier depiction of the delta-plus particle, wherein the up quark is identified as the binding of an A particle to a C particle. Also recall that the ABC Preon Model defines the charm quark as the first excited state of the A and C binding, and that the top quark would be the second excited state, should it exist.

But note that there should be no binding at all if the A can be freed from its bond at an energy less than that of a possible second exited state. As an approximate upper limit, it should not be possible to have a quark form at a mass much above twice the mass of the A, since putting that much energy into the bond should be enough to free the A from the C particle.

To see how this is so, observe that a free A will have a mass of m_A. Less obvious is that the remnant that the A escapes from will also have a mass estimated to be about m_A. This is because the energy of the bond reduces the total mass of the system containing both entities that participate in the bond, and here I propose an estimate that when freed each entity has a mass that is about equal to the other entity participating in the bond. Hence, if we put into the bond an amount of energy equal to about twice the mass of the A times c squared, the A will be freed. It may require somewhat more or less energy to free the A, but twice the mass of the A is a reasonable upper estimate for how heavy the top quark could be.

In an earlier thread we found that twice the mass of the A is 91.2 GeV/c^2, and yet the top quark has been reported to exist with a mass of 172.4 GeV/c^2. Since 172.4 GeV/c^2 is much more than 91.2 GeV/c^2, this would at first appear to be counter-indicative of the ABC Preon Model. In fact, for some years after the announced discovery of the top quark, I had thought that the likelihood of the ABC Preon Model being a correct model of nature had been considerably damaged experimentally by the proclaimed top quark discovery.

In addition to getting the mass correct, it also is important what the decay products are. If an A anti-A pair forms out of vacuum, the anti-A B combination can be recognized as leading to the W signature (as shown in this earlier thread), and one of the C B bindings can readily be seen to be able to form a bottom quark. After formation of a W and a bottom quark, the remaining B and A preons as well as background production of other preon and neutrino pairs will hadronize the bottom quark, resulting in the signature identified as the top quark signature.

So the ABC Preon Model does indeed predict the top quark signature as found in high energy physics experiments, both qualitatively (it gets the correct decay channels) and quantitatively (the center of mass of the decay products is predicted). The explanation for the observed results are different from those of the Standard Model, since instead of a top quark forming, the ABC Preon Model recognizes the results as showing the formation of free preons.

posted on Apr, 3 2017 @ 07:20 AM
link
The Exposition of the ABC Preon Model will involve many threads. Here are links to previous threads in this series, in the order that they appeared:

6. The ABC Preon Model. Relationship to the Standard Model.

9. The ABC Preon Model. The W and Z. A and B masses. First Free Preons.

I understand that you have put an immense amount of effort into your work and even writing it up in this series. But for myself, being decidedly ADD, dyslexic, and socially mal-adjusted, I would appreciate a very short explanation for the bottom line of your findings. What does it all mean for those of us that live typical, if uncreative, lives from beginning to end. Tell me something meaningful that I can pass along to others over lunch.

originally posted by: dfnj2015
I just want to see an anti-gravity car in my lifetime.

While not quite anti-gravity, I have an Aether Model that may have something you will like. I plan to post threads on that in the future. But for now I am presenting my ABC Preon Model, and I thank you for reading and regularly commenting.

I understand that you have put an immense amount of effort into your work and even writing it up in this series. But for myself, being decidedly ADD, dyslexic, and socially mal-adjusted, I would appreciate a very short explanation for the bottom line of your findings. What does it all mean for those of us that live typical, if uncreative, lives from beginning to end. Tell me something meaningful that I can pass along to others over lunch.

Depending upon your lunch crowd, you can try this:

By learning that seeds led to the growth of edible plants we could invent agriculture which led to power over our food supply. Many other rudimentary practical advances came as our understanding of nature grew. As history progressed, understanding of physics, through F = dp/dt, and understanding the electromagnetic force, led to further advances such as skyscrapers, electric motors, electric lights, radio, TV and large computers. Understanding quantum mechanics led to the microchip and computers so small that they can fit in mobile devices.

High energy physics has struggled with the question of why we should spend so much money to push our understanding further, since obvious practical advances are not clearly foreseen. But it is often the case that the practical advances only follow once the knowledge is obtained. Since high energy physics involves the study of forces far stronger than those associated with electromagnetism, it is quite possible that once we better understand those forces we will be able to produce new technology of considerable benefit, such as enabling travel to distant worlds or obtaining clean, inexhaustible power.