posted on Mar, 13 2017 @ 07:15 AM
link
In the previous thread, we introduced the preonic modeling for the massive leptons, repeated here in the picture below: 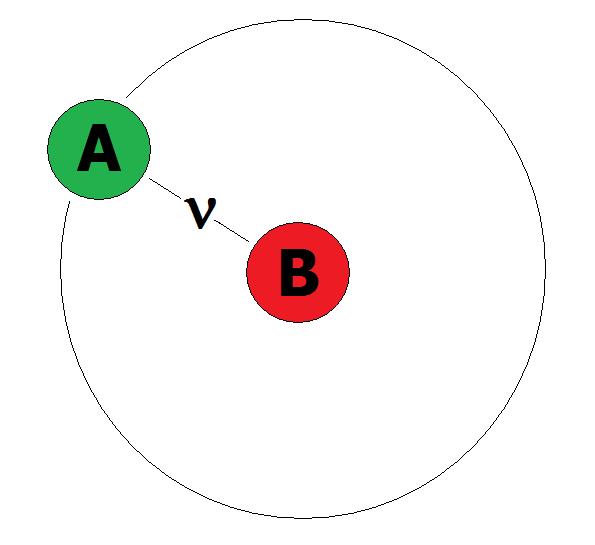 At this point in our development, we can now move on to assign some quantum numbers to our preons. A first point of analysis is to note that to date, no experiment has shown the existence of free electric charge in fractional amounts. For that reason, we will begin by arbitrarily assigning our new A preon to have zero electric charge and our new B preon to have a charge of minus one. Since the neutrino has zero electric charge, this will leave our leptons as having a charge of minus one, as they must. Note that the antimatter leptons will have a charge of plus one, but we will deal with that topic later. Next, it is known that the neutrino has a half integer spin. In this model I am assuming that one quanta of the binding particle is contained within the composite particle, and hence, the A and B particles can either be both fermions or both bosons. Recall that Fermions are particles with half integer spin, while bosons are particles with integer spin. 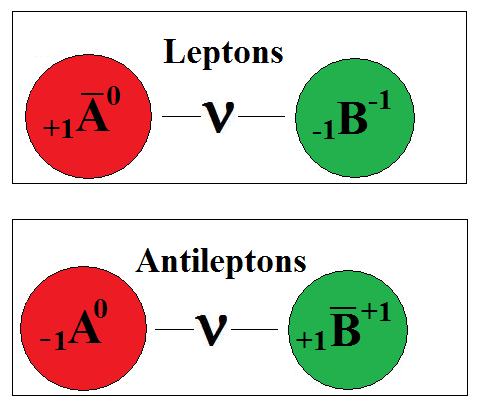 The nomenclature introduced above is to have a trailing superscript indicating the electric charge on the preon and a preceding subscript indicating the neutrinic charge on the preon. With the total electric charge being equal to minus one, we see that our preon model for leptons gives the correct electric charge. With each substituent having the opposite neutrinic charge, we see that our constructs have overall zero neutrinic charge. The result that stable particles have zero total neutrinic charge is the analogy of the fact that atoms also have zero total electrical charge. Lastly, by having the A and B particles be either both fermions or both bosons, the total spin of the leptons can be arranged to be half integer, since the bound neutrino is itself a half integer spin particle. Hence, all quantum numbers of the leptons are obtained in a model that readily allows for three generations of leptons. (At this point in the development, it is not known whether the spins of the preons are bosons or fermions, only that they are both fermions or both bosons, and the spins are constrained so that the total spin of the massive leptons is one half.)

Also introduced in the picture above are the anti-matter counterparts to the massive leptons, as well as anti-preons. A line (also called a bar) above the letter identifying the preon indicates it is an anti-preon. It will turn out in future analysis that the massive leptons are actually made up of a B and an anti-A, rather than a B and an A, so that improvement to the model is introduced above as well.

With massive leptons now modeled and their quantum numbers defined, we'll see how hadrons get modeled in the next post.

posted on Mar, 13 2017 @ 07:15 AM
link
The Exposition of the ABC Preon Model will involve many threads. Here are links to previous threads in this series, in the order that they appeared:

edit on 13-3-2017 by delbertlarson because: Added newline between links

posted on Mar, 14 2017 @ 12:59 PM
link
Wow, I hate to be so cliche' but this stuff is above my head so I can't even contribute anything. It is nice to have members like you here though and I hope you get some productive feedback. Arbitageur is one of our in house physicist and I hope he and other scientists here chime in.

Looking into this type of star I noticed the variety of star types. I did not realize there was such variance and It would be nice to see a thread breaking down the different types of stars, how they formed and function maybe.

Have these preon stars been confirmed yet? Seems there is prize money for the proven existence of them. Could their make up be used for any type of energy production here on earth on a small scale? Do they generate dark matter or use it? It seems they are suspected to be quite the creative contributors in the cosmos.

Good luck on your endeavors and thanks again for the contributions here.


Looking into this type of star I noticed the variety of star types.

In the Wikipedia reference for Preon Star preons are central, but my threads here won't have anything to do with stars. I am presenting a preon model, which is a model of particles that I believe make up all massive matter. The ABC preons are theorized to be sub-subatomic particles, similar to, but not exactly the same, as what is mentioned in the Preon Star article. ABC preons do make up the massive leptons, but they don't really make up quarks directly - I'll get to that in the next two threads.

Could their make up be used for any type of energy production here on earth on a small scale?

It is my belief that preons have already been produced here on earth in our particle accelerators. It will be another several threads until I get to that, but I will discuss it before too long. One dream of understanding nature at the sub-nuclear scale is that it could make fusion energy accessible if we can understand how to control nature at that level, but I make no claim about knowing how to use preons in that way.

Arbitageur is one of our in house physicist and I hope he and other scientists here chime in.

Arbitageur, moebius, Dr X and ErosA433 did comment on the earlier two threads and I hope they continue to read and comment whenever they find it relevant. If my work contains errors I will want to know about it so I welcome critical comments as well as supportive ones. This particular thread (thread three) just adds a few quantum numbers to what was already posted in thread two, and so I am not surprised there haven't been too many comments. Maybe there will be more after thread four, which will model the hadrons.