originally posted by: elysiumfire
Ah, all this must be happening in that country which is the paragon of peace, the Divided States of America...no compromise.

Question: Why Trump? What could he possibly bring to the presidential office? He has neither the character nor the personality nor the skill set to be a president. The only way I can see him getting into the White House, is if all the American troglodytes vote for him. You know who you are.

Is it not obvious that he is only stating what you want to hear, but then again, what's the other option...ah yes, a witch who is corrupt damaged goods. Seems to me, America has no relevant or quality representation for president in either camp.

The violence reminds me of the multicultural violence in European immigration. All these ideologies vying for the throne, and when you have such multiplicity, you cannot have so-called peaceful debate.


South park did an episode like this years ago about how they had to vote for a new mascot and they could either have a giant douche or a turd sandwich. Those are our choices.


No, it's your sheet ignorance and bias, nothing more, nothing less. Funny how no violence breaks or broke out at any other rally. Funny how the violence only encompasses Trump.

But Trump supporters. They point the finger at everyone else but their man, Trump. It's really pathetic.

Trump's only crime is speaking. If you find that to be in any ways criminal or even comparable to the actions of these protesters, we're in deeper waters than I thought.

originally posted by: Gryphon66
a reply to: IsntLifeFunny

Is there a date in the title? No?

The topic is political violence.


The topic of discussion is the overwhelming amount of Trump rallies in the West Coast that are seeing violence strictly because of left wing protestors attacking Trump supporters. It has been noted directly to you that this is an increasing phenomenon perpetrated specifically by the left. This cannot be refuted. Show us some videos of Trump supporters doing this type of thing and you would have a point.

Do you live in California? Almost every single metropolis or highly populated area here has a huge contingency of "Hispanics"

What the hell are you smoking? And you're also saying that Trump cannot have rallies where large auditoriums are built WITHIN these cities?

This is insanity. You sound like the ultimate Fascist.

On a serious note, this really does seem like a setup by someone at the very top of our corrupted planet. The media only reports what they are told to report after all...

originally posted by: Gryphon66
For a little bit less biased description of the "right" and the "left" in the US.


Ask yourself this question: who is taking the side of authoritarian control over individual rights?

Here here. First thing I can agree with you on this thread Also historically when one party has had the presidency for 8 years it normally goes to the other party because America is fickle. We shouldn't hate on the left or the right. But we should be mad at extremists and violent people. And the illegal immigrants don't have the same rights. That's why they're illegal. We should deport the illegals, then e should increased legal immigration more and let the people who have been waiting years legally in. Then maybe those deported illegals can get back on the list and we can let them in.
edit on 3-6-2016 by LordDraconia because: (no reason given)


Are you f'n serious with this claim? Every major city in CA has a "Latino community". That's like saying Hillary only schedules rallies in men-only communities just because she hates men (which she does). 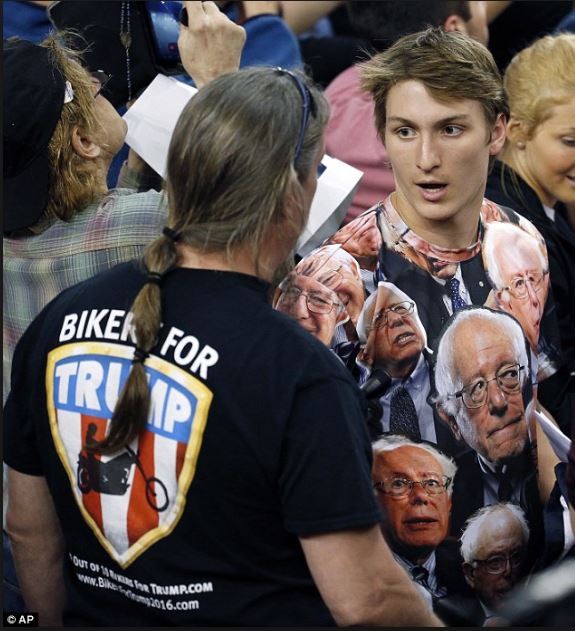 
US elections have come to resemble a show - a joke, personal attacks seems to be the norm. It's entertainment, only.. its results will decide the leader of the most powerful country on Earth.

I love American politics for that very reason, I'm ashamed to admit. But personal attacks are nothing new. Jefferson's campaign said of Adams in 1776, he had a "hideous hermaphroditical character, which has neither the force and firmness of a man, nor the gentleness and sensibility of a woman", to which Adams replied, Jefferson was a ""a mean-spirited, low-lived fellow, the son of a half-breed Indian squaw, sired by a Virginia mulatto father."

LMAO thank you. Today I learned: Politics was just as #ed up back then as it is today.

But it's okay, as angry as I may sound in text here on ATS, the strategic side of me KNOWS how this will effect votes. I see the bigger picture. I Sociology there is a phenomenon where the 'underdog', once attacked, garners sympathy. Especially a lone White woman, in the midst of angry men waving a foreign flag....getting pelted by eggs and yelled at.

I oppose it, but I know what it stamps on the collective mind. So in pure 'strategy', taking one for the team is beneficial. She's a martyr of sorts. And there will be more. Because the Left have no more recourse than to acts like rabid dogs.

I celebrate this, while condemning it. Because the end result is victory. And then the real fun starts.

Always, let your enemies expose themselves first and fight for you. Then when they are beaten, you pound on them until there are none left. The stage is being set brilliantly. We actually couldn't ask for better for our cause in saving this nation before it's too late.

I wonder if it was as prevalent as it is today though. I'm being reminded of the movie Idiocracy.

Somewhere deep in the heart of the Elites HQ:
edit on 3-6-2016 by LordDraconia because: (no reason given)

originally posted by: TechniXcality
I don't have much to say other than I am completely left in utter disgust after having watched these videos, if the left thinks it holds no stake in what is occurring around our country than they are sorely mistaken. The end of your party is well on it's way, you're followers are exposing themselves daily for what they are, I'm going to say this right now if you want a serious escalation than go ahead and attack our women, that is the quickest way. Here's the links and videos, what do you all think?


SAN JOSE, Calif. — With escalating vitriol, Donald J. Trump unleashed an attack on Hillary Clinton on Thursday in response to her speech earlier in the day criticizing his foreign policy positions. Speaking at a campaign rally here, he began by calling her speech “pathetic,” dismissing it as a stunt and saying, “It had nothing to do with foreign policy.”


Outside the event, protesters, some brandishing Mexican flags, clashed violently with Mr. Trump’s supporters. Videos taken at the scene showed a number of physical confrontations. In one, a supporter wearing a football jersey emblazoned with Mr. Trump’s name was pelted with eggs. Another showed an unsuspecting man being surrounded by protesters and punched in the face.

There's more, this is just disgusting, and yes I do blame the liberals, as they are the ones who are attacking. MODs feel free to move, I thought this should be in civil unrest


I was completely disgusted by it also especially the guy with green shirt getting hit from the side. Meanwhile the media says she 'provoked them' which is ridiculous. Still doesn't justify the other guy being blind sided and left bleeding.

You know, I have watched my precious liberalism transform into this monstrosity for more than a decade.. Please do not give the puppeteers the satisfaction of destroying the left by painting all of it in the vein of statist captivity. That is solely the result of the most advanced psychological operation ever inflicted en masse. The left has been co-opted and corrupted, and the right will follow. The balance and spectrum between the two is critical to representing the majority of views contained in the population.

The modern insanity/extremism of the left is not some fluke, it is by design, and even a well intentioned, brilliant individual is susceptible. Especially those who think they are immune.

I fear that this is just the beginning, and that it is too late to stop the ball that has started rolling.


originally posted by: Gryphon66
a reply to: xuenchen

Are you f'n serious with this claim? Every major city in CA has a "Latino community". That's like saying Hillary only schedules rallies in men-only communities just because she hates men (which she does).

Gryphon is smoking some serious Sativa or dosing some acid.

I live in Los Angeles proper. A city which is MAJORITY "Latino". So by her/his estimation, Trump should not rally in one of the HUNDREDS of towns in Los Angeles? Or L.A. County itself?

And I wonder HOW these cities and counties got to be so "Latino" almost overnight.

In a way, yes. You could say they are silently endorsing it. Turning a blind eye at the least.
They know good and well, that most people are not really paying attention anyway.

Put the violence next to a picture of Trump, along with a provocative 'anti' Trump headline and VIOLA!

Gave you a star for that one. Its quotable.

I wonder though, do you realize or are you aware of the fact that sooooooooo many of us want nothing whatsoever to do with either the "left" or the "right" at this point.

posted on Jun, 3 2016 @ 01:06 PM
link
What a bunch of violent disgusting vermin. They are bringing more voters over to Trump's side. ~$heopleNation
edit on 3-6-2016 by SheopleNation because: TypO