page: 1
52
<<   2  3  4 >>
log in
join
share:
TheNewRevolution
+31 more
posted on Apr, 8 2015 @ 03:08 PM
link
In light of today's guilty verdict of Dzhokar Tsarnaev, and the emotional filters surrounding the vengeance involved in this incident, I want to bring back to forefront some questions that were a topic of much discussion on ATS throughout 2013 involving the "terrorist attack". Of course it is human nature to feel relief and come kind of closure to the aftermath of the terrible tragedy that happened, but that does not mean we should close our eyes and ears to the still looming questions surrounding the event, questions that if answered might paint a very different story than that of two brothers simply pulling off a terrorist attack on innocent civilians.

Without further ado, let us address the elephants in the room in the forms of questions still unanswered about the Boston Bombings.

1. Why were runners told there was a bomb squad drill that day, only to have authorities deny such things? Why was it announced as a drill immediately following the bombings?

2. Authorities early on said that the devices used were "too advanced" and "not the kind of thing learned from Google" and that they were sure the brothers were not acting alone and were part of a bigger "sleeper cell" of terrorists. What ever came of this?

3. Family said that the FBI had contact with the Tsarnaevs as early as 2011 and possibly for up to 5 years prior. Why, and if so why wasn't any of this seen coming? What contact did the FBI have?

4. Who was the Saudi national Abdulrahman Ali Alharbi, who was at the event, who has numerous Al-Queda links?

5. Why did John Kerry and Barrack Obama quickly meet with Saudi officials after the event?

6. Who were the CRAFT black-op teams all around the bomb sites and why were they there? Note: they had backpacks nearly identical to what was used in the explosion.

7. Why was so much of the glass of buildings blown outward when the explosion occurred outside on the sidewalk?

8. Why was the fraudulent "cowboy hero", Carlos Arrendondo, even there along with several other crisis actors?

9. What happened to Dzhokhar Tsarnaev in the months following his arrest and before the court proceedings, and why are there no pictures or videos of him?

10. Under what authority was martial law declared in Boston and warrentless house-to-house searches ensued?

11. Why did the police open fire on the boat if they were supposed to capture Dzhokhar alive and he was not firing back?

12. Why was Ibrogim Todashev, friend of Tamerlan, who was admittedly unarmed, shot and killed by the FBI in his apartment a month after the bombings?

13. Why did the US not heed the supposed warnings from Russia about the two men?

14. The FBI claimed to have video of Tsarnaev planting the bomb and that they would release it. Was this video ever released?


I am sure that there are more questions that have yet to be answered, but these are the ones that I remember and so should everybody else. Maybe the Tsarnaev's were the bad guys and deserve everything they get, but that does not account for sloppy investigative work and a ridiculous amount of coincidences and unanswered questions. Let us not simply sweep these questions under the rug in lieu of vengeance served.
edit on 4 8 15 by TheNewRevolution because: spelling and grammar

FamCore
+6 more
posted on Apr, 8 2015 @ 03:22 PM
link
Thanks for making this thread - I will try to contribute as well since i want to see what our fellow ATSrs think

"Devices were too advanced...": Article

Shootout on the boat: Article/Video

What happened to Alharbi: Article

Russia warned U.S. of Tsarnaev being a Radical: Article

Footage of Tsarnaev before and after blast - no smoking gun footage?: Article
edit on 8-4-2015 by FamCore because: Added another article
extra DIV

posted on Apr, 8 2015 @ 03:47 PM
link
a reply to: TheNewRevolution
Good questions. I was always curios about this video myself, showing apprehended Tamerlan naked in Somerville.

This article claims Tsarnaev popped up from the boat and open fire. I didn't recall this.

Found another arrival that Tsarnaev had a shotgun. And an officer was shot in the groin. Bleeding out. Officer Donahue ..
www.wbur.org...
edit on 8-4-2015 by Bigburgh because: (no reason given)


If the "CRAFT" black ops teams WERE there doing anything sketchy, why would they be wearing identifiable uniforms?
edit on 8-4-2015 by FamCore because: (no reason given)

I do think some links would have been helpful in this thread.

This article (and most of the articles I've perused) have stated that Tsarnaev WAS unarmed on the boat, but that cops engaged and used firearms out of fear that he was armed article


If the "CRAFT" black ops teams WERE there doing anything sketchy, why would they be wearing identifiable uniforms?


When it comes to the CRAFT guys I wrote this thread at the time about how the conspiracy theory evolved, its unfortunate but I think most of the videos have now since been removed but you might find it interesting.

The verdict, reached after a day and a half of deliberations, was practically a foregone conclusion, given his lawyer's startling admission at the trial's outset that Tsarnaev carried out the terror attack with his now-dead older brother, Tamerlan.

His lawyer told the court he was guilty! His high profile, pro bono lawyer, Judy Clarke, the same lawyer who handled the Jared Loughner case (another highly suspicious false flag event), told the court her client was guilty. This is like Legal Advice 101 and yet a high profile lawyer goes against all common sense.

Whenever a court hearing is compromised, everyone expects the judge to be bought off, the prosecutor doesn't really need to be since its his job to accuse the suspect of being guilty, but what everyone always overlooks as being a key part of a fake trial is the DEFENSE. If you control the defense, you silence any type of arguments in favor of the suspect.

Jared Loughner initially pled not guilty but then after a year of forced psychiatric medicine he changed it to guilty. Same thing happened with Moussaoui, the "20th hijacker" and oh, who was his lawyer? Judy Clarke, of course.

Yes it was always my belief that officers waited because of fear Tsarnaev might have been armed.. all accounts now state he was armed.. and fired on the officers. One officer was essentially dead at the E.R. ( Donahue ).
Rapid infusion, a breathing tube and Epinephrine saved him.. can't find anything stating the officer survived after that though.

But Tsarnaev admitted his guilt. No changing that now. Unless he's having survivor guilt from running over his own brother... most curious indeed.
edit on 8-4-2015 by Bigburgh because: (no reason given)

I remembered this circulating. But I passed it off a coincidence. I couldn't positively identify the three troopers/Craft security guards.

posted on Apr, 8 2015 @ 04:08 PM
link
CNN Boston bombing Crisis Actor Also Connected To Sandy Hook Shooting look at 2:38 on the video it shows her at both scenes (Sandy Hook and Boston)


If the "CRAFT" black ops teams WERE there doing anything sketchy, why would they be wearing identifiable uniforms?


Perhaps your Average Joe isn't familiar with the "Craft" so what's to look for? Also find it odd that Tsnarov's back packs were grey, and the "Crafts" looked identical to what they showed, contained the bomb. 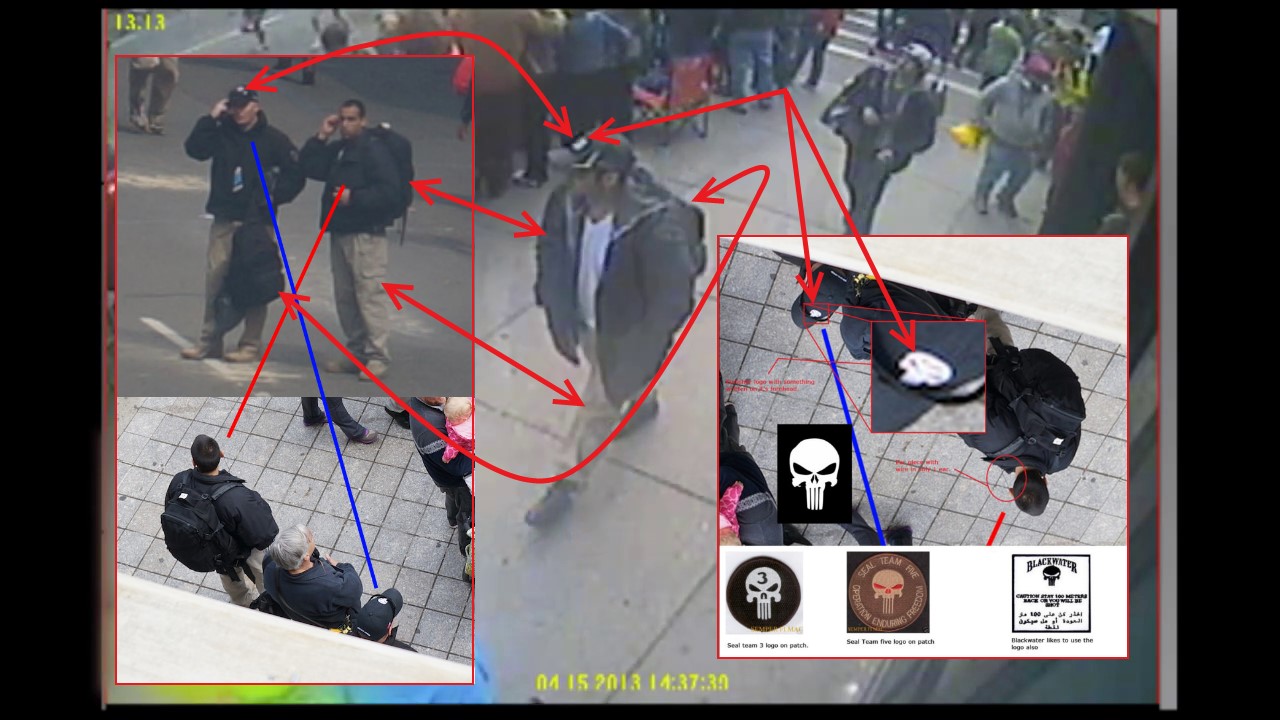 I have that very hat.. and two shirts. I ordered them after a trip to Texas. Prior to these events.

The back of the hat says. "Who said violence doesn't solve problems".

posted on Apr, 8 2015 @ 04:33 PM
link
a reply to: Bigburgh
So do you think these were just average Joe's like yourself then? They look kind of involved to me. 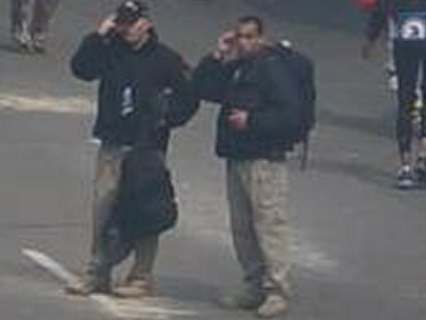 posted on Apr, 8 2015 @ 04:35 PM
link
I remember watching it on CNN as it unfolded that there was also a bomb at the library that was confirmed. What happened to that? Nothing was mentioned on it after the brother was arrested.

That never sat well with me. Anyone else remember that?
edit on 8-4-2015 by texasgirl because: (no reason given)

They train all kinds. Private security too. No those guys are Craft. Supposedly hired to help security that day.
edit on 8-4-2015 by Bigburgh because: (no reason given)


Lol.. in other words. I won't argue your point. Though local police here ask about my shirt one day at the mini mart. That's when I found out about the Craft security at Boston.
edit on 8-4-2015 by Bigburgh because: (no reason given)

Judy Clarke doesn't fight guilt or innocence, she fights the death penalty. Look at her track record. Look at her history. Look at statements she's made, repeatedly. Her main goal, stated over and over again, is to take a likely death sentence case and get it turned into a life sentence.