posted on Jul, 17 2014 @ 06:02 PM
link
This whole thing can't help me think of an episode of Gundam Wing, where the gundam pilots are given false information on the leaders of their opposition, Oz. Instead of their target plane having on board top Oz officials, the last leaders of peace are on board. Oz gets the last hurdle out of their way and blame it on the gundam pilots.

As you can see now, the footage is not of todays crash, and my point that it is not consistent with todays outcome was probably correct.

originally posted by: Aloysius the Gaul

This is 911 all over again. The writing is on the bloody wall.

Shhhh don't say that. They jumped on me when I brought up the similarities.

Magical passports that survived burning jet fuel. The possibility of this leading into a war. Just two that come to mind.

No the cargo plane that was supposedly shot down was MH17 it appears.


Get prepared for Ukraine to declare all out war before to long and take back Ukraine.

Ukraine can barely handle the mercenaries and the separatists. They don't REALLY want war with Russia. Who stopped Putin in Georgia? The fact of the matter is....Moscow knows what Ukraine has militarily, where they hide it for the most part, and all the weak points to strike. Ukraine used to be theirs. The only thing Kiev will do is get a lot of people killed. Nobody on the United States friends list is even a factor militarily. Russia would wipe # and leave skidmarks on any army in Europe, probably the armies of all of Europe combined. I don't see Ukraine taking much of anything other than a good ole fashioned passionate ass whippin. All the more reason this seems like a false flag. Ukraines ship is sinking. They need help. BAD. Enter NATO.

HMMM. This is not good at all then.

Same thing applies. When DHL was hit in Iraq by a MANPADS they shed parts all the way to the runway. Only in that case the missile was to small to bring the plane down.

originally posted by: Dutzy
Multiple Russian media outlets reported that the terrorists in E Ukraine downed a military AN-26 plane, about an hour before the news that it was the Malaysia Airlines plane that was downed.

You've included the word "terrorists" in at least three separate posts. Why is that? Anyone who challenges an established government must be a terrorist? 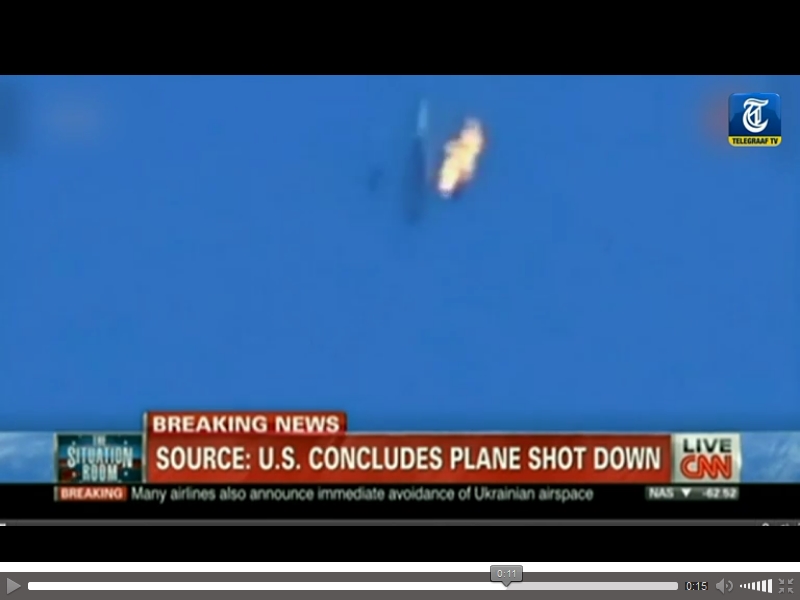 Does this look like a plane flying at 10 km altitude after it was hit by a sam?

One would think that if it broke up, it broke up at the missiles impact or shortly after.

Did this plane get hit by a sam at 10 km altitude and descended down to the altitude it is at in that pic with the engine/wing on fire, in a somewhat controlled flight only to break up at a lower altitude?

I know the footage is zoomed in but I still think it is much lower than 10 km's.

I'm no expert but this seems strange.

That footage that CNN is using is from June 6th -- when an Ukrainian spy plane (An-30) was downed.

I think someone has taken the older footage and added text to make it look like it was being reported as today's event, not CNN reusing old footage.

posted on Jul, 17 2014 @ 06:05 PM
link
Sorry if someone has posted this theory but I couldn't sift through all the comments first.

The Ukraine now it has been taken over by the EU, US and NATO with Israel involved too are frothing at the bit to get Russia to bite to create a major conflict right?!

And you know they are going to pin this on Russia right?

Well when during the time that the Malaysian Airlines MH-370 disappeared (Still not found) there were reports of a soon to be scrapped Malaysian Airlines 777 being bought from Kuwait, the numbers erased and it was shipped to France then later in 2013 ended up in a Hanger in Tel Aviv, Israel.

MH-370 has still not been found and the conspiracy circles are saying it was landed at Diego Garcia base and the passengers offloaded including the 20 Freescale employees!

My theory is, what if some of the people on MH-370 were put on this flight that was actually the plane that was in Tel Aviv then blown up to blame Russia to get into a major conflict????!!!

Just a question but if a jet shot a heatseeking missile or something....wouldn't it blow out the engine right around where its on fire at?

No the way the alleged ground based missile system works.

That's what I'm getting at...I didn't think many of those surface to air missiles were heatseekers....especially the ones that go that high up....but then again I'm no military man either so I wouldn't know. It was just the location of the fire that makes me think it was a heatseeker instead of one guided by radar or something.

It is believed to be ground based, not jet aircraft delivery.

That is quite a coincidence.

oh wow is that for real? I haven't watched CNN for almost a year now cause they suck. If they're really perpetrating this as flight mh 17, then it's pretty clear to me what's really going on

posted on Jul, 17 2014 @ 06:07 PM
link
a reply to: NoRulesAllowed
Hi, NoRulesAllowed. I almost agree with you, but I am puzzzled by the fact that this was a Malaysian 777, and the odds of a second one of those going down was tiny.

This is 911 all over again. The writing is on the bloody wall.

Shhhh don't say that. They jumped on me when I brought up the similarities.

What Weapons of Mass Destruction are you referring to? Last I checked there wasn't a Nuclear, Biological or Chemical attack in play here. Anti Aircraft fire that takes down a plane is and of itself not a WMD no matter the number of lives on that plane. Using said plane as a guided missile though would be different.

Whatever, I said something was off with the footage and it turns out it was. You didn't notice a thing.
edit on 17-7-2014 by AstralTrespass because: (no reason given)

posted on Jul, 17 2014 @ 06:11 PM
link
This is my question. I'm looking for where someone said it( this thread has gotten quite long) but didn't this plane disappear from radar before it crashed. Is it at all possible that like flight 370 somehow some electronics got silenced and maybe the rebels did shoot it down not knowing what it was because they really did think it was military? If a plane is crashing , how far does it fall before it drops off of radar? The plane obviously wasn't destroyed mid air....so how did it drop off of radar shortly before it crashed?

.but then again I'm no military man either so I wouldn't know. It was just the location of the fire that makes me think it was a heatseeker instead of one guided by radar or something.

The AN 12 shoot-down on June 6th that is shown in the video was hit by a MANPADS which uses a heat-seeking guidance system which would hone in on the engine exhaust.

The weapon used in the shoot-down today was a much more sophisticated radar guided weapon which uses a proximity fuse to explode a shrapnel wrapped warhead in the vicinity of the aircraft.

Quite often an aircraft disabled with these weapons will continue to fly for some time until all control is lost and the aircraft breaks up while airborne to aerodynamic forces.

Wow, I'm so terribly sorry that I didn't notice that wasn't a 777, looking at the inch and a half low quality image on my phone screen. I guess I better take these bionic eyes I got back for a refund.

originally posted by: Brainiac
a reply to: Jobeycool

Heh, without the help of the United States. Obama is a real disappointment as a President. He's President of a Country that is in the middle of a World Wide State of War, but he want's no part of it. No one wants war but you have to do something. Putin calls Obama on the phone as a part of his ploy to swing that carrot in front of the donkey. Obama just buys it hook line and sinker... Then Putin walks away from the phone chuckling at this fool. lol

We've had Russians ships probing us, there was a Russian destroyer 140 miles off the coast of California a few months ago, Russian bombers testing the U.S. airspace.