BREAKING NEWS
Reports says that a Malaysia Airlines Boeing 777 with 295 souls onboard has crashed in Ukraine near the Russian border.
We're currently trying to find the actual flight in our database. More information to come.

Reports JUST came in, about 30 seconds ago that a Malaysian 777 with 295 people on board has crashed in the Ukraine. No further details yet, I will post them when I can find them.

www.ibtimes.co.uk...
www.forexlive.com...
www.streetinsider.com...
edit on 7/17/2014 by Zaphod58 because: (no reason given)
edit on 17-7-2014 by SkepticOverlord because: (modified subject to reflect updated information)

posted on Jul, 17 2014 @ 10:33 AM
link
Let the speculations begin.
I mean strange that it is a 777 again and it is a Malaysian Airlines flight that goes down in a region where a crisis is going on.
Furthermore I bet Malaysian Airlines will get their European flight permit revoked soon.

The airline is in big trouble, let's just hope it did not get shot down by accident.
edit on 17-7-2014 by aLLeKs because: (no reason given)

Well this isnt going to be good at all, reports are coming out talking about a big smoking hole in the ground. A prayer for all those on board.

posted on Jul, 17 2014 @ 10:35 AM
link
Considering the area where this occurred, the best case scenario is that the airline came down on its own, and that statement speaks for itself. And if it did come down on its own, I wonder if the malfunction is at all related to events that occurred a few months ago to the Malaysian Airlines 370 flight.

EDIT: Seems like it was shot down, both sides will point a finger at each other. Early reports indicate a "Buk missile system" was used. Both sides have such weapons and that fact alone cannot narrow down the culprits. If it is confirmed that the rebels carried out this attack, it would give NATO justification to get involved. That is probably what is going to happen.

EDIT 2: Shortly after the Malaysian Airlines Flight came down, rebels claimed they shot down a transport aircraft: "Militias proclaimed the People's Republic of Donetsk (DNI) near the town of Torez downed military transport aircraft An-26 Ukrainian Air Force. This is reported by witnesses from the scene. According to them, the plane was hit by a missile, and then began to lose altitude, crashed to the ground and burned." - Source: News Website

Seems like it might have been a case of mistaken identity and shooting down the wrong aircraft. Either way, looks like the rebels are going to be in serious trouble.

One last thing: A photo of airline seats and a body from the crash. Obviously NSFW: Crash Photo 1 Crash Photo 2
edit on 7/17/2014 by Pistoche because: (no reason given)

posted on Jul, 17 2014 @ 10:36 AM
link
As tragic as it is, sad to say these horrific events are becoming as common as a rain shower. Worse yet, I fear we haven't really seen anything yet.

I pray those who have lost loved ones in this event will not become the next wave of hate.

Something's up with Malaysian Airlines. Two major incidents in such short time period.
edit on 17-7-2014 by Hellas because: (no reason given)

Wookiep
+4 more
posted on Jul, 17 2014 @ 10:37 AM
link
Do Malaysian passenger jets normally pass over Ukraine/Russia when going from Europe to Malaysia? Honest question.. This does seem a bit strange especially with the other "lost" plane that went missing right around the same time the Ukraine/Russia conflict started.

EDIT: apparently they deleted that... maybe they are not sure or confused it with the fighter jet earlier today
edit on 17-7-2014 by aLLeKs because: (no reason given)

What conclusions would those be? So far all I'm seeing are initial facts being posted.

Sky has a few pictures of a huge fire burning behind some buildings as well.

It depends on winds. Your route is almost always determined by winds at altitude.

posted on Jul, 17 2014 @ 10:45 AM
link
Ooooo....that would be just nasty if it came out that the Russians shot it down. What if they did under similar circumstances as the last one and maybe something was faulty with the transmissions on both jets that gave the military the impression they were hostile? 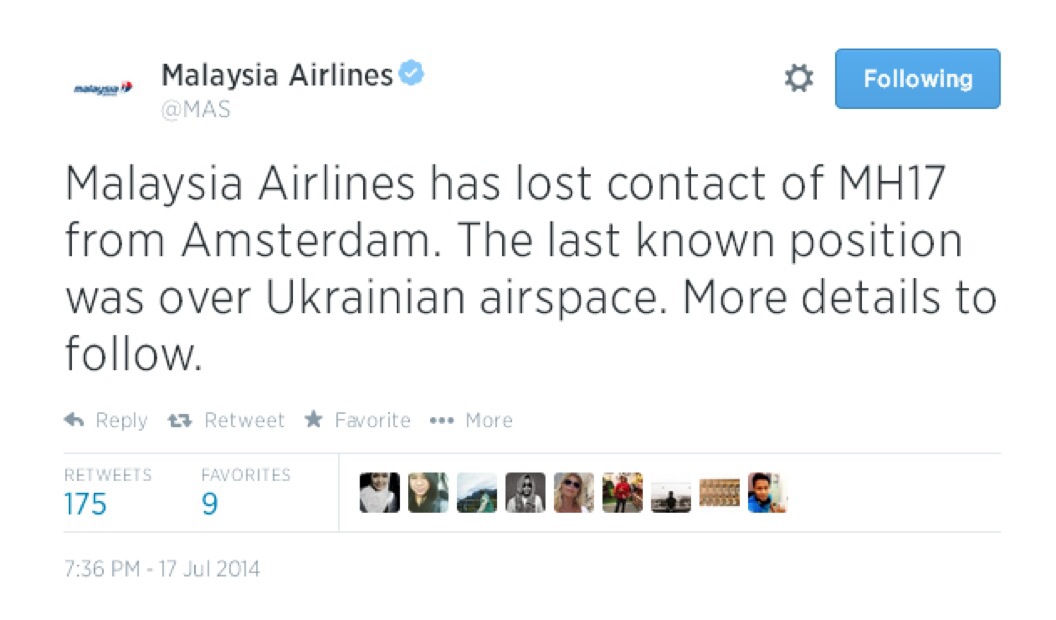 Unless they can prove that there was a missile fired at the right time, it's way too early to say that.