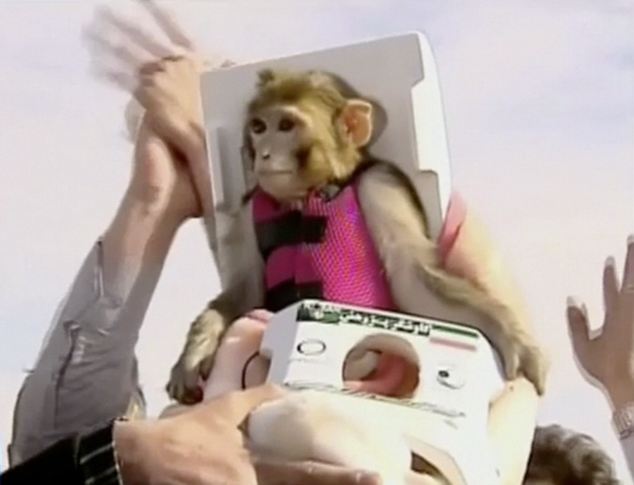 Iran has sent a second live monkey into space and safely returned him to Earth, the country's state-run news agency reports.

Fargam the space monkey rode a Pajonesh rocket 75 miles up into space before his capsule safely detached and parachuted back to the ground, Iranian state TV said.

The report, which showed the rocket blasting off and then showed the monkey, strapped snugly into a seat, staring at people clapping to celebrate its safe return, added that the launch was Iran's first use of liquid fuel.

Well the West better get back on the ball. China lands probe on the Moon, Iran launches and retrieves a monkey. Where's Space X? Hopefully somebody can translate what the video says. I think from the image there is an interview with the pilot. 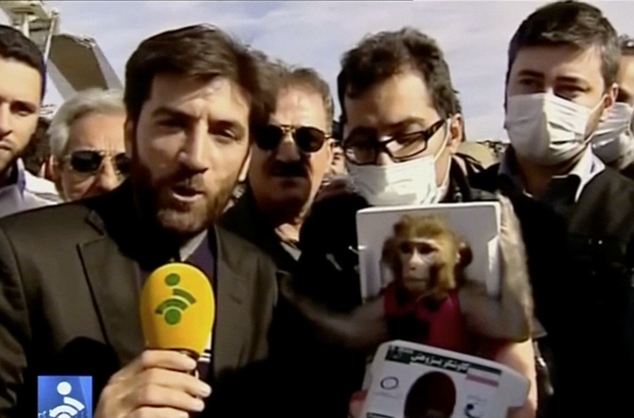 posted on Dec, 14 2013 @ 11:36 AM
link
Probably not the best idea for Iran to be firing anything into the air to be honest! Israel will probably be all over this...


Well if Israel wants Iran to launch a monkey for them maybe this will finally break the ice between the two? Probably not.

posted on Dec, 14 2013 @ 11:44 AM
link
I've followed Iran's space program, such as it is, for awhile now. This is an interesting development, assuming it's accurate as presented.

They do seem quite busy and very serious about moving up to a more direct position among the world powers. Why not, too? They have the population, industrial base and even cultural history to support the effort. If we can all just keep it to constructive things and leave the ICBM aspect out of what is otherwise a great thing!


It is safer to test "Space Program Vehicles" than it is to test missile platforms......

I think I may have intercepted a radio transmission right before launch. It said "Don't shoot it's just a monkey"!

Looking at the foam box the monkey is in reminded me of the weather balloon, camera and I-phone a father and son launched to 60,000ft. High tech!

Wrabbit2000
If we can all just keep it to constructive things and leave the ICBM aspect out of what is otherwise a great thing!

That's just it. If history offers us any sort of measuring stick then so to speak, The US, Russians, North Korea, China and most if not all other Nuclear powers have used a similar track to develop those "ICBM" technological aspects.

I'm glad the Monkey is safe.


Do they even notice that the inception of the most successful
space program in the known world, didn't come until many
years after it's founding nation, achieved indoor residential
plumming nation wide ?


I have never seen a hint of evidence to show that Iran should be denied power, they have not started a war in over 100 year I believe? (correct me if I am wrong) The only reason is because they are buddies with Hezbollah and they overthrew the Shah (American puppet) in the 70's

Good on Iran, I hope they have a better future than what NATO has planned for them.


I hacked into Iran's space program and got their design plans, so it seems legit. 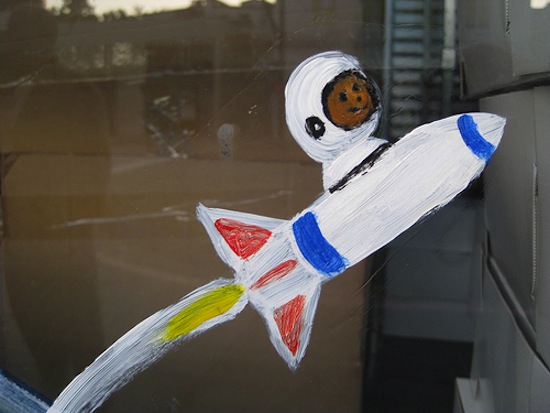 But what I have to ask is, why? Why send a monkey into space? What is the reasoning behind it. Sending a rocket into space with sensors, meters, gauges would achieve the same thing, in my humble opinion.


mutally assured destruction, not good for anyone, one hell of a blender. That would be the end of both.


I hacked into Iran's space program and got their design plans, so it seems legit.

But what I have to ask is, why? Why send a monkey into space? What is the reasoning behind it. Sending a rocket into space with sensors, meters, gauges would achieve the same thing, in my humble opinion.

Why did the United States bump humans from the first tests and send a Chimp instead? That made a monkey out of the guys, to see some of what was written and said about it at the time.

I think the problem and question is...who wants to pop the hatch and find Gumbo that kinda, sorta, if you really try...looks human, like it used to be....if all their systems and hopes have a glitch someone missed. Far better to have a primate (moral arguments aside) take one for the team, than a human prove space is a fatal environment.

Didn't most, if not all space powers start with sending an animal up to test life support first?


Didn't the US get their chimp back safely as well?
I think the Russians dog didn't fare so well

posted on Dec, 14 2013 @ 12:31 PM
link
I bet they bought that rocket from Ghorbanifar.
Iran shooting a monkey in to space? Entirely possible I suppose.
They have nuclear power, some new missile types with range of a few thousand miles and can bring down an US sentinel drone. Maybe they really did it.

I agree completely with your point about how other nations have developed their ICBM programs vis a vis through the "peaceful" space programs. Sad, really when you think of what we could have achieved by now if the whole planet were collaborating on space exploration.

US Space Command better watch out none of our satellites slip on a monkey turd up there and trigger WW3 by accident.

I forgot to add:
DEATH TO IMPERIALIST IRANIAN SPACE MONKEYS!

Not being an Israeli this doesn't bother me, in fact it might not be a bad thing to balance the powers in the region. Poor Iran is boxed in between Iraq, Afghanistan and a couple Soviet Republics and they've done nothing aside from a little tacit support of Hezbollah to merit talk of bombing them back in to the stone age. My worry is that Saudi Arabia will demand the US strike Iran and knock them back militarily and perhaps technologically a decade or so.
I think it's high time we began open talks with Iran and began treating them with the dignity and respect they deserve from being one of the developed nations with a long history of peaceful acts. Most of their problems have been induced by the Western powers from installing the Shah to the return of the Ayatollah.
edit on 14-12-2013 by Asktheanimals because: added comment

posted on Dec, 14 2013 @ 12:33 PM
link
Our space program brought innovators and movers out of the woodwork.. and we experienced progression on a grand scale as a nation and IN COOPERATION with other nations. It bled out into other industries and boosted our standing in the world. I personally think this is a positive move for Iran. Its a move forward and in a good direction for a nation "we" ( West) have considered ( wrongly) to be huts, nutty radical muslims, and savages. Tehran is a beautiful modern city composed of those of ALL religions ( including Jews and Christians) and the majority of the scientists are western educated.. moving into this century at a good clip. My husband's ex is Iranian and I know these folks well.. a lovely PEOPLE even if the govt is NOT so lovely. Kinda like us here in the states. LOL!
Good on them, I say!


lol...Yeah, the US got it's chimp back all happy and glad to be alive ....until it learned later what necropsy means, anyway.

I do seem to recall the Russians having a spat of bad luck on their end, now that you mention it. Even a persistent rumor over the years that they did handle the reality of a human lost on a test flight, but I'm not sure that's ever been run down 100% either way?