posted on Apr, 14 2013 @ 05:22 PM
link
What are the safest cars for teenagers? When my daughter was 16 her grandfather was terminally ill, (she is the only grandchild on that side of the family) so he bought her a 2007 Mustang. It was a beautiful car. She loved it. I agreed because, well, the man was dying and he wanted to do it for her.

Well, she is now 17, almost 18, she has had the car 2 years and had her first fender bender in January. She hit a car who pulled out of a parking place in a parking lot. The bumber and fender was damaged...badly...even though she was only going about 10 mph (estimated by witnesses and the police accident recreator). $2500 in damage. Insurance paid for it so we paid our deductible and went on.

Today another fender bender. A car locked its brakes up on the highway the car behind them hit them in the rear and my daughter slammed on her brakes, and swerved to the emergency lane to prevent a full impact with the car in front of her. I was proud, defensive driving! Good job kid!

However, she clipped the bumper of the car in front of her, damaged its rear bumper and rear quarter panel. Her car?????? Its trashed. Seriously. The hood is all buckled and the front bumper is in pieces. Accident recreation and witnesses (again) stated she was going 20-25 when she hit the other car and the air bags did not deploy. The speed limit is 55 so she wasnt cited. However, her car is a mess. Mustangs apparently are made of plastic...its crazy. If her car had a metal bumper it would probably have little to no damage. The car in front of her had a plastic rear bumper so it was damaged too. The car that caused it was an older suv with a huge metal bumper. NO damage.

So my question is, other than buying her a surplus tank, what is a safe, METAL car ???

I seriously had no clue so many cars bumpers were plastic. I checked, my mini van has plastic bumpers, my husbands dodge ram pickup is metal.

She is ok. She went to the hospital to have her head checked out, she hit it on the steering wheel, but she will be fine. She has a goose egg but the doctor assured me it is superficial.

I just want her to be safe. The policeman and witnesses said she did everything right. But, accidents still happen. I just want to keep her as safe as possible...

It will be hard for her to sell the Mustang because of the sentimental value, and her grandfather died a year ago. She doesnt want to get rid of it, but I feel like she is driving around in a plastic car that is not that safe and as a mom it really scares me.

Oh and when we bought the car we asked about safety and was assured it was safe, apparently Mustangs have some kind of crash panels where it limits the damage to a small area, and it has the two times she had fender benders, but it seems to be mostly made of fiberglass. That is what I dont like. A metal car and can take quite a licking and be ok...

Do they even make metal cars any more?


Get em a classic! Something from the 60s 70s. I had a 66 Delta 88 and sold it to something newer. The guy I sold it to, had a lady pull out in front of him and he hit her doing about 30mph. The old beater had a very small dent on the front right nose and the new car he hit was totaled!

I must also tell a story about a time I went fishing with that ole beast. We drove back this bumpy road, (path) along the lake to get where most people would not go. We got to our spot, and parked the car and fished. It started to storm, so we got in the car to leave. As I backed the car down the small hill, the front end slid around due to the wet ground and hit a tree that was as big around as a soft ball. Needless to say, the tree snapped in two and the only damage to the beast was some scratched paint where it hit the tree.

The Best Cars for Teen Drivers

Now - these may not be high on metal content, but they are among the safest for teens for a number of reasons listed in the article.

Something like on old Crown Vic may be safer, but it's not going to handle very well and it does have that big v8 in it.

So my question is, other than buying her a surplus tank, what is a safe, METAL car ???


I think the last "metal" cars were made back in the 60's when cars came with steel bumpers. Back then, you could hit someone from behind at 5 mph, and escape with just a scratch. Now you hit hit someone at just 5 mph, you have 1,000 dollars worth of damage to your bumper!

I would just research online for the safest new or used cars. I would definitely make sure the car had side air bags and possible curtain air bags.


New cars are meant to deform and buckle easily when you hit something precisely to make them safer in a crash.
Having a pristine metal bumper left undamaged on a car after a crash isn't much help when all of the energy that it didn't absorb by deforming is transferred right to the person inside the car.


Thank you for the info and story! They just dont make them like they used too! My first car was a 1976 pinto. I hit mailboxes, trees, etc and it would just be scratched! This car she has, breaks into pieces when she hits anything and it ends up being $1000 .


Great info! THANK YOU! I dont think I could get the
"princess" in a crown vic but if I could , I would! LOL

I had no idea VW Jetta's were so safe...that would be more in my price range!!


Air bags! YES!! I was just thinking something teen proof to save on my insurance premiums! They are bad enough with her just being 17!!

You are right, one bump and you are out a couple grand, where in the 80's, it would've been a scratch!

posted on Apr, 14 2013 @ 06:00 PM
link
reply to post by k21968
My oldest daughter's first car was a 94 Monte Carlo. She wrecked it at least half a dozen times, a few of those times serious wrecks. Had to replace the front clip and a fender on it after the worst one but she physically never got a scratch, nor did anyone riding in the car with her.

A few scratches here and there won't matter and safety is guaranteed. 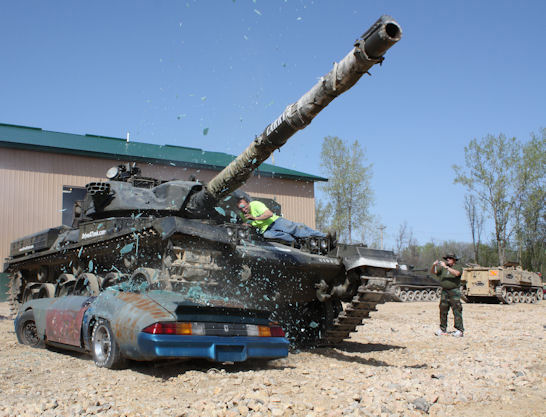 
Lol. Yeah, me too. What was the question again.

posted on Apr, 14 2013 @ 06:36 PM
link
Personally, ive never bought, and would never buy, anything NEWER than a 2000 model of any vehicle. Something about newer cars turning into mangled pieces of scrap metal and exploding into shrapnel if a large enough bug hits the grill, doesnt really do it for me...

I had a 2001 hyundai and ripped the rear bumper off backing up into a parked car (my bad) going less than 5mph. Likewise, i was rearended in a 93 sable station wagon on the expressway and the minivan that hit me was destroyed, while i had my bumper pushed in about 3 inches.....

Basically, anything 2000 and older will survive a mortar round, anything newer will most likely crumple like paper if sideswiped...


I did not know that!! So the damage to her car from such a small fender bender probably kept her from getting hurt worse. I really didnt think of that!! Thank you for the info!!

Originally posted by jude11
Get her the one on top:

A few scratches here and there won't matter and safety is guaranteed.


We live near an army post and my first words to her (after I knew she was ok) was "we are getting a tank!!" LOL I hear tanks are hard to steer and stop though...but, she would be safe!! However, no one around her would be safe!! It would be her taking out houses instead of mailboxes!!


Sorry Sara is so distracting! I never realized so many guys are so attracted to her before I made it my avatar!


The thing is this - I remember high school in the early 80's the kids all drove old cars and trucks from the 60's and 70's. I remember in college my best buddy drove an old, puke green, late 70's Chevy Monte Carlo, my girl friend's dad had supplied her with a tank-like 1970something Old's Delta 88. As an aside, that thing had a HUGE back seat!! - Thanks ex-girlfiend's dad!!!!

Back then those things were cheap and built like a tank. They chugged a lot of gas, didn't handle too well and given their age would have trouble from time to time.

But now, over 20 years later, the few of them that are around are "classics" and while they may be made of metal and not get lots of damage in a crash - they are hard to find and you may pay a lot of them.. So, you may be better off to get a safer, more recent car. The downside is, as you say, they are designed to crumple instead of dent.

posted on Apr, 14 2013 @ 09:15 PM
link
Porsche 911 C4 Cabriolet. In summer your child will be arctic cool. In winter a Germanic efficient heater will keep her warm. There is no chance of nookie whatsoever, it has two seats. No chance of driving round with five friends, it has two seats. And you can borrow it.

posted on Apr, 14 2013 @ 10:00 PM
link
The newer cars are actually safer, due to the way they are designed. I would avoid the cars like the minis, just too cramped. My first car was 2 door 1978 LTD Landau. That was a tank! Good thing gas was cheap, cause I think I got about 3 miles a gallon.