Jaeger bombs are on me! Xx

If we get another 11 posts today then it might become KZ = Kill Zone!
edit on 15-12-2019 by RelSciHistItSufi because: (no reason given)


If they ever succeed at infringing our right to keep and bear arms, it will be over. The 2A is and always has been a huge issue for me. Like he said, once the American People are disarmed, the OWG's power to control everything we do will be complete.

"They" did not give anyone rights, they had no rights to give in the first place. They don't have a shelf with rights they can bestow. This is a MASSIVE distinction. Who are "they" anyway - can you point to them?

Codifying something does not bestow control over it as one would like to believe.

Again, the Constitution does not give any rights to anyone, in fact, YOU and I as living beings are not a party to it at all - it is about the business of doing business as government.

I HATE the fact the drafters never anticipated a future where HUMAN BEINGS are inherently free was no longer "self evident." Ugh!!!

Reliance on guns is a false god, a false protection scheme. How do I know? At least 8 years (I'd argue more) of the 16 year plan happened and DJT Q reality isn't using GUNS to reverse stop it and set a course.

Alright, I nit picked a bit.

A Cruz FISA is a big problem for the media goons.

Can you imagine the Anger of ALL the Senate if there was a FISA on Cruz?

Senators all protect eachother when it comes to stuff like that.

They were already saying things at the Judicial Comittee hearing like: "If Page can be FISA'ed like that, what's to stop them from FISAing us". 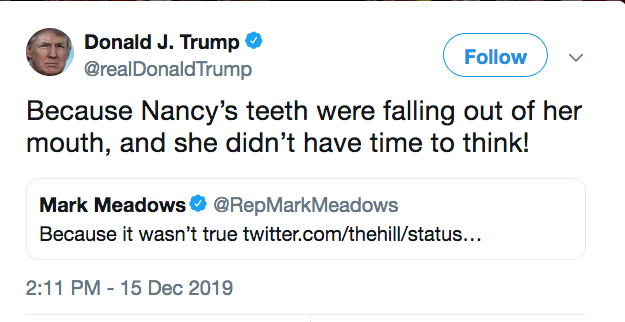 Watch the clip. Watch the Water (I've never seen her drink on one of these things)

Water=Info = She is not in charge of anything at all - controlled.

posted on Dec, 15 2019 @ 05:58 PM
link
a reply to: hiddenhandofthetaff
It's much bigger than Earth itself and boundaries are like here.

The soul/spirit is an immortal light unseen by the avatars (humans) probably reincarnated or go to the infinite and good light or just dwelling between two worlds or going dark-evil
your soul spirit can choose to travel immortally within the boundaries of our solar system.

within this realm of death and the boundaries, you don't or maybe have some energetic powers to do something as that what I understand happens.

Want to break free after death break the interstellar bubble and you can reincarnate everywhere IMHO? otherwise, we will be recycled endlessly until the spell boundaries are broken..

Cranky, it doesn't matter. The fact is we have the guns. Millions of them. No other country has them like we do. Our guns and our rights to use them scares the heck out of the controllers. No country, bank, organization can control us as long as we have the guns.


Often when the water is picked up it means this is important information. Horowitz did this during his hearing - he grabbed the water, made a statement, set it down.

She is asked if bribery was it, then why no bribery included? Her answer is "I didn't decide, others did." Not her decision to make, even though she's claimed it was all along and it could have been included even without merit.


Dostoevsky said, “If god does not exist everything is permitted.”

I think we are seeing the results of that belief in action.

One of the issues facing humans is that morals are ultimately a social construct, so in a sense are just “made up.” At the same time, they are necessary for the smooth functioning of society.

Religion has tried to deal with this paradox by saying, no, morals come from God and have a higher authority. This worked within the various populations that supported a particular religion. But as society became more global, it became clear that religions and their dependent moralities were relative.

Sure there were some practical universal concepts, like preventing inbreeding and preventing violent chaos, but the bedrock authority of a God’s decree came into question.

So as belief in religion has waned, so has the foundation for morality. Perhaps the logical consequences of Dostoevsky’s suggestion was summed up by Aleister Crowley who said, “Do what thou wilt shall be the whole of the law.”

Personally, I think the essence of true spirituality is to choose good for no other reason than that is your preference as a soul.
No rules, written in stone.
No fear of consequences.
No enticement of reward.
No social pat on the back.
Just a choice based on the love in your heart.

Ironically, Crowley also said, “Love is the law, love under will.” I don’t pretend to understand him.

Can we get board owner to take a Group Photo?

Tat, someone on twitter found a 2007 pic of Pientka as FBI swat. They posted several pictures of what could be him walking with Comey, another walking with McCabe, one sitting behind Comey or McCabe at a congressional hearing plus others.

All I am reiterating, after hearing the final few minutes of that video, is that there will be an even stronger push to infringe upon our Constitutionally expressed recognition of the unalienable right to keep and bear arms.

John Brennan's last tweet was about remembering Sandy Hook and continuing to push for gun control legislation. He didn't "remember" them last year on Dec. 14th. But this year, he decides to remember and push.

He knows what is coming. We, too, know. The American People...not the pretenders...completely understand what is at stake.

Hopefully, John Brennan will be in jail soon and can observe from a jail cell on death row. 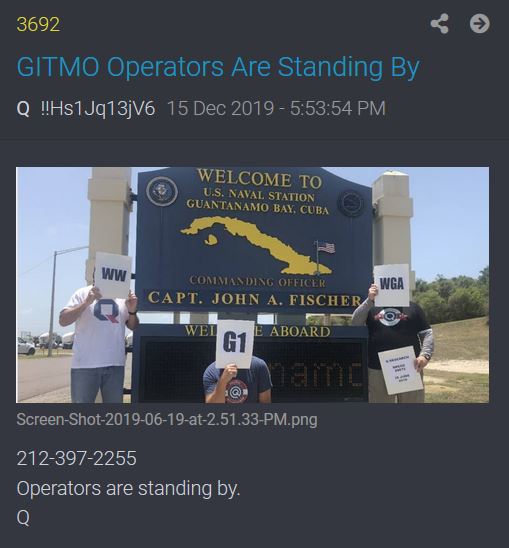 Yeah, "do what you whilst" is another of Crowley's lines.

These people are of the Black Lodge.

Cool idea!! We could meet in one of my all time favorite Quiet spots.
There is a decent cowboy watering hole nearby. 🍻🍷🥂🥃🍸🍹🍾🍼🥤🥛
Able to land small planes on the desert playa.
I got a marker somewhere out there.

Heh, probably not too practical though but, what the hey.