or, capitalist opportunists capitalising on an opportunity

optics and money is a capitalists/corporatists dream

Check the date on your GCHQ document then ponder the following:


Yep, that straw that broke the camel's back, and all during the transition, when BHO had no business with the affairs of the President Elect.

Way back in the very first Q thread by Dashen, Grambler brought us some good info on Glencore, Marc Rich, and Huma Abedin's cousin:

As a side-note, there also lies an interesting connection; Doronin, one-time business partner of Huma Abedin's cousin, Omar Amanat, worked for financier Marc Rich (deceased). And who else worked for Rich? None other than Dan Gertler - one of the 13 "corrupt" or "serious human rights abusers" listed in President Trump's new Executive Order.

As we reported earlier this week, Gertler - an Israeli billionaire mining magnate, was revealed by the Paradise Papers to be chief negotiator between the Democratic Republic of the Congo (DRC) and his primary business partner - mining company Glencore, founded by none other than Marc Rich - the former employer of Omar Amanat's money man - Vladislav Doronin.

And there you have it - a particularly bad December for a few colorful characters - most, if not all of whom are only a few degrees of separation from the longtime core of the DNC.

What a small world.

THIS.
This connects things for me. Ok, yeah, sure, maybe these guys [Glencore] are making billions on minerals and oil. It could be.

I just find it intriguing at their core level, they broker in commodities to whomever has money to give them.
So be that minerals, oil, or trafficking in DRUGS, HUMANS, and likely weapons, I’m guessing these assets they’ve built are out to good use. That’s kind of where my head’s been at, first reading about all their ports and warehouses and having more vessels than the US Navy.

Trafficking is such a money-making affair, their control over assets that would seem to come in handy for this type of horrific “business” is too interesting to overlook.
edit on 16-4-2019 by ucanthandlethetruth because: Fixed quote

Yep, involves all sorts of characters in the G.O.D. or D.O.G.S. business. US Navy is THE biggest arms dealer in the world.
Alot is mixed in with perfectly legit business deals. Hasn't changed much from the 80's except more players, more corruption, and more death. Trafficking AND Smuggling is a massive money-making affair. Some of it is much dirtier than other.

posted on Apr, 16 2019 @ 03:09 PM
link
Credible threat leads to lockdown at Columbine high and other schools in Denver area:


As you all know, the Columbine mass shooting happened April 20, 1999. Saturday marks the 20th anniversary of that awful massacre.

Those of us (myself included. Huge dance music fan as well as work related) who knew Tim recognized that although he did have issues with health and depression he was getting better.
There are dozens of articles showing how people close to him were shocked by his “suicide”.
Reason I don’t believe he offed himself is due to a conversation we had regarding PTSD and suicide. He clearly stated to myself and a few others who were there that he would never do such a thing.

Snopes conveniently had to inject their spin on a possibility that I feel is accurate.

Additionally, Avicii acknowledged at the time of its release that his 2015 video for the song “For a Better Day” was intended to call attention to the issue of child trafficking (particularly in war-torn countries); it wasn’t a coded attempt to furtively “expose” a particular child trafficking ring

In Tim’s own words:


“The promise of a better life often traps families and children into being used as tools for some of the most despicable people on Earth,” he said in a statement, as he released the videos.

“It’s an issue about which I hope to start a louder discussion, especially now with the huge number of families on the move from war-torn countries looking for safety and shelter.”

“For a Better Day,” which will appear on Avicii’s upcoming album “Stories,” features a video full of unsettling imagery as hooded traffickers go on a killing spree of adults in their way, including a politician portrayed by actor Krister Henriksson.

The video shows two children rushing through fields to escape, only to be forced barely clothed into a traffickers’ car.


Having worked heavily in the LA area, within the EDM scene I know that drug & human trafficking IS going on regarding the djs/event promoters/models/dancers. Tim would have easily seen this firsthand or known about this.

I don't know much about Carmelites either, but what just freaked me out is this book by Max Ernst. It has this Alice in wonderland thing:

"Rêve d'une petite fille qui voulut entrer au Carmel" - "Dream of a little girl who wanted to join the Carmelite order"
Otherwise known as "A Little Girl Dreams of Taking the Veil" it seems, but check out this excerpt of the opening:

What do little girls dream of who want to take the veil? On that night a violent storm will break against the doors of the academy of science and the water will roar in the pipes.

The water will remember the shameful year 1930, the year it would have liked to see all the cathedrals of the universe parade in far-too-short dresses. It will remember above all a certain night because…

On Good Friday night of the shameful year 1930 a child hardly sixteen years old dipperd her two hands in the sewer, pricked her skin and with her blood traced these lines”

To love the holy father and to dip one’s hands in a sewer, such is happiness for us, children of Mary.


77 collages follow, separated into four sections. Below I’ve reproduced 15 of them complete with accompanying text. Have a look.

WHERE IS WALDO [red/white]


No escaping their PAIN

posted on Apr, 16 2019 @ 05:03 PM
link
It may also be important to note what else Qatar Investment Authority owns that ties to the Weinstein brothers.


on 27 October 2014 the Qatar Awareness Coalition (QAC), a group of high-profile individuals affiliated with American newspapers, platforms specialized on counterterrorism and private companies seeking to 'raise awareness of Qatar and their activities around terror, genocide, and transnational organized crime - including slavery and narcotics' addressed a public letter to Harvey and Bob Weinstein, the founders of Miramax Films. ...Miramax is largely owned by the Qatar Investment Authority; yet in December 2013, Miramax and the Weinstein Company signed a 20-year deal for future cooperation. The QAC signatories claimed that the deal "reunited the company with its founders", and thereby united "the Weinstein brothers, Miramax, and Qatar – a prolific state sponsor of terrorism across North Africa and the Middle East – in one corporate entity.” 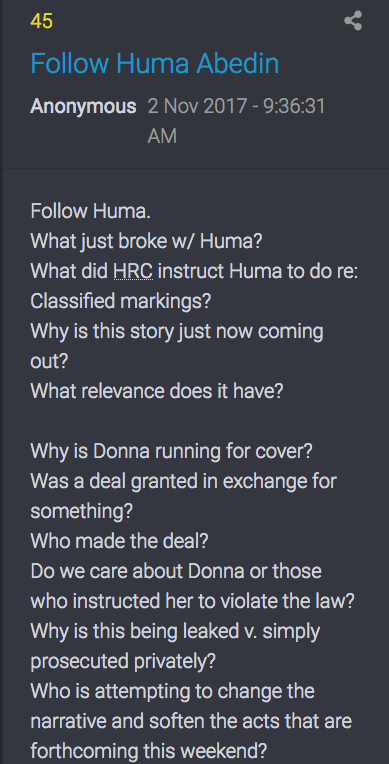 Interesting RE: FISA on Huma...

The top Tweet of DTJ, interview: Ken Starr "cooperation" is the takeaway at the end. Fully cooperated.


On April 12, the day following Assange’s arrest, Giuliani gave an exclusive interview to the Washington Examiner, in which he stated that “Julian Assange could expose a ‘plot’ involving Ukraine to falsely accuse Trump of colluding with Russia.”

Giuliani noted that he was referring to “Assange exposing the origins of the federal investigation of possible Trump collusion with Russia and was not raising the possibility of Assange disproving that Russia hacked the Democratic National Committee and Clinton campaign Chairman John Podesta.”

Giuliani told the Examiner to “keep your eye on Ukraine.”

From Spygate Timeline at: www.theepochtimes.com...


The decision to insert GCHQ as a back door to eavesdrop was sparked by the denial of two FISA Court warrant applications filed by the FBI to seek wiretaps of Trump associates.

GCHQ did not work from London or the UK. In fact the spy agency worked from NSA’s headquarters in Fort Meade, MD with direct NSA supervision and guidance to conduct sweeping surveillance on Trump associates.

I can't find the source for the info contained in the TruePundit article, but it makes sense, based on what we know thus far. 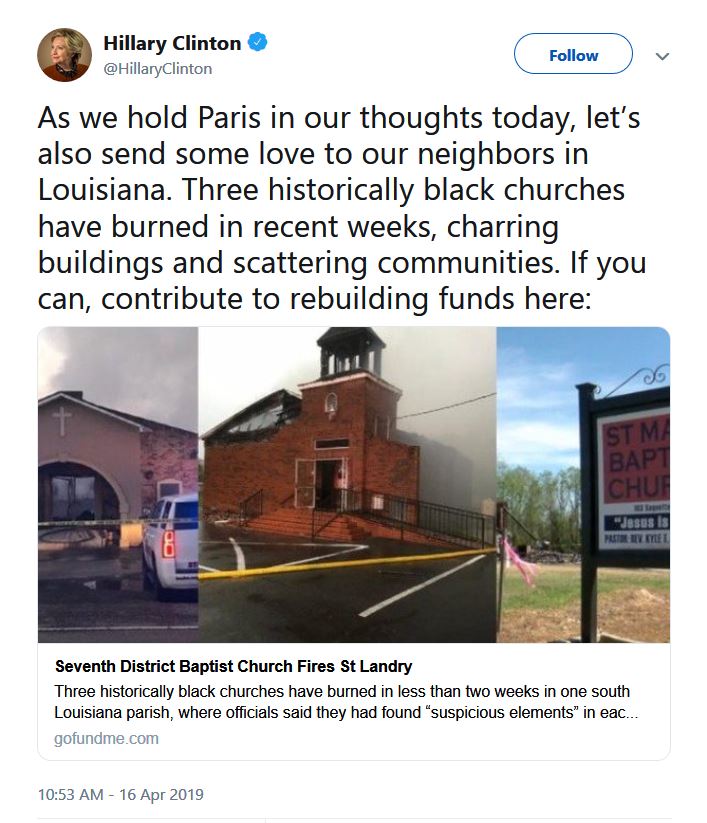 A great way to funnel a billion dollars into all sorts of slimy people's pockets.

originally posted by: EndtheMadnessNow
The wicked witch is at it again. A new bs scandal has begun.


originally posted by: EndtheMadnessNow
The wicked witch is at it again. A new bs scandal has begun.

I noticed that. Good lord, am I the only one without a gofund me scheme? Gee, I hope things are working out on the McCabe one.

Care, Bongino had an interesting take on the Assange arrest. Start at 3 min and it lasts about 30 min. Very involved and center's around Dana Boente and multiple other people left over and/or hired by Barr. Puts a light on some folks and timing of arrest.

After listening, I regret not taking notes so will go back and listen again with pen and paper.

Timing and patience is the hallmark of the adm.

Opps, it was the witching time.

I will post my notes after relistening.
edit on 16-4-2019 by liveandlearn because: (no reason given)