They sponsored competing rallys in the same locations so they could spread the divisiveness and rancor. Hoping for fights and riots that would make the evening news and further the message to millions.

They are using him.

originally posted by: hoss53
then you need to explain to me what I'm missing.


originally posted by: shooterbrody
a reply to: Vasa Croe

careful she is partial to crow

Where is that evidence that was going to be discovered today with the top secret documents? Why didn't this big meeting go the way they / you expected? Where's the evidence of a spy being inserted into trumps campaign to help Hillary?

While were asking, what happened to the IG report that was going to put all these dems in jail? It was due in April and it's nearly June?

Why haven't all these things that were going to result in exposing the deep state done what they were supposed to do?

Because they are all based on conspiracy theories and nonsense that trump is making up as he goes along. Like the birther thing. Like the they wire tapped trump tower thing, like the three million people voted illegally in the election thing, like the biggest inauguration crowd ever thing. It just goes on and on.

Don't tell me about crow.
You guys have a show on the food network dedicated entirely to it.

This is the kind of post I like to save. I have a collection of them. I suspect they will be kind of fun to revisit in the near future.

Please keep the supply up Silly, you are doing great!


While were asking, what happened to the IG report that was going to put all these dems in jail? It was due in April and it's nearly June?

Are you really this ignorant or is it an act?

A new report released on Friday indicated that the highly-anticipated testimony from Inspector General Michael Horowitz has been postponed as new leads have emerged in his review of the criminal investigation into former Secretary of State Hillary Clinton’s use of a private email server.

There you go, your highness, now you know why the report isn't out yet. 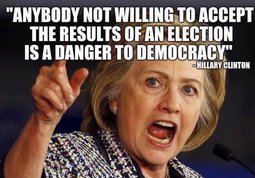 originally posted by: Grambler
a reply to: kurthall

Or how about hosting an anti trump rally that many attended?


AFTER Trump won the election. Russia organized a NY Rally against Trump AFTER he won.
That falls under "discord", which was a secondary goal, Trump winning was goal #1.
They would look to sow discontent about any US President.
That takes nothing away from them successfully getting their choice elected.

That should be enough for any rational person to believe the opposite.

posted on May, 25 2018 @ 07:03 PM
link
THey may have influenced people, but Hillary was ahead until Comey started talking about the stupid email crap.
Comey cost Hillary the election and may have permanently destroyed America as well.

Yes, those emails confirming to all Americans how corrupted Hillary is did actually contribute to her poetic demise.
It didn't make sense for Comey to do that, but he was afraid and nervous for his own behind and so he made huge mistakes against himself, and against Obama, and Hillary. All those people he colluded with to influence the election politically, which he broke the laws/rules of his office doing.

It was the most satisfying thing I can remember seeing happen on election night.

They will ignore it as per usual.

But let's get back to russia.

Must suck for the dems that russia runs the USA instead of the them. /sarc

They jealous or something? lol.

Why don't they try to run russia?

Oh wait.. because they can't run a lemonade stand.

She is an animal!

Man, she just won’t go away. MAGA! Today’s executive orders on being able to fire federal sloths? I mean cmon, the guy is hitting home run after home run!

If this keeps up, we just may get America back!

originally posted by: Vasa Croe
a reply to: kurthall

Any chance you could post some of these mind altering Russian super influential posts or any propoganda?

I'd like to see just what they are claiming changed people's minds.


You want to see the Russian ads? Here is some of them. It's silly to say they had an inpact all they did is stir the pot the media was doing far worse.


Yeah that kinda sucked for you and her, didn't it?

It really hurt, deep #in down, right to the bone, huh?

I bet you cried right along with her, like a scene in deadpool.

Did you scream at the sky?

Tbph, I don't see what the big deal is so long as Russia/China didn't actually tamper with the count.

They tried to influence people? That's what you do during the campaign.

It's the electoral college that needs fixing.

This is great comedy.

You realize Hillary had a tainted reputation right?

Personally, I have not liked her since Bill Clinton's Presidency. She lost me when she went after Bill's accusers so aggressively. Lost all respect.

She was already beaten in a previous Presidential run by Obama, and yet the Dems insisted on running her.

Beating Trump should have been easy, but they ran a divisive candidate. One they knew was hated by half the country, yet Russia did it. LOL

Russia was playing both sides, did you forget they were organizing anti Trump rallies?

I've seen the list of ads they placed and posts they made, they were not specific to Trump. Nor even to one party.

They wanted discord, and the left is giving it to them, in droves.

Ok So now its Comeys fault Hillary didnt win....cause he blew the cover on her illegal email server....haw haw haw
I hope you see whats wrong with this picture. Comey and Mueller both have been trying to cover up for Hills. This just doesn't get much crazier does it. I hope you also see that there's still no proof of collusion with Trump. If anything, it would be with some of the leftist factions who hate Trump with a passion. Im a big fan of Yuri Bresmenov, who explained to us Westerners that the Soviets had " Sleepers" who get involved in such things as we see with BLM, Occupy, etc. Leftist activism is exactly that which matches prior Soviet Communism and ideology. None of this means that Trump colluded with Russia. If anything its facebook which allowed this type of trolling on their website, and now they are ostensibly cracking down. But guess who is spearheading that effort, why its none other than George Soros. You just cant make up this stuff.

Hillary was "ahead" until voting closed on the east coast on election night; when it began to become evident that all the pollsters had made a mistake when they said Hillary was ahead ... the question is for how long were they wrong? Long before Comey said anything about emails I suspect. People just didnt want to admit that they were going to vote for Trump or stay home because they didnt want to vote for Hillary so the pollsters counted it wrong.