Powerful mind control to divide the country and foment a civil war or civil unrest.

They have figured out how to capitalize inthw situation and it's all I've CNN MSNBC an other news stations.

This is coming as a massive surprise to the Media.

I also sliver a false flag is being rolled out right now based on the mind control.

Are you talking about all the protests popping up everywhere?

We may be a mess up nation but we still hold dear the values of our elections and respect the results.

People will protest as is in our rights to do so when the winner is not the one we hoped for, but eventually everything settler down and people goes on with their lives.

As for the media we very clearly have learned that people didn't trusted the them at all, if they had Hillary would have been the winner.

originally posted by: UKWO1Phot
Multiple victims at a shots fired call at the Anti Trump riot..

Not related to the protest other crime.

posted on Nov, 9 2016 @ 10:25 PM
link
Soros paid for these agitators to "protest", once again. Same slimeball social engineer types are up to their usual tricks. Stay frosty folks..

The folks who wanted Bernie's Revolution just woke up and realized that the angry right-wing old people took the reigns of democracy and are driving it in a direction that terrifies and excludes them. So yeah, they are young, and they are going to scream and shout and make rude gestures and what really can they do? They feel doomed.

You have no idea how many people are genuinely afraid for their families, their health care, their loved ones, their marriages (gay people), their rights, etc. This is far more than being upset "their candidate" didn't win. This is a crisis for them. This is a shattering of the world. They have no trust in the Republicans to do anything except hurt them, and they have reason to believe that. They feel their future was just taken from them by some sort of magic trick -- and they are pissed.

This is just the beginning. It will spread, and it won't be, again, simple sour grapes. These are the voices of Occupy on steroids fighting for their lives, livelihoods, families, friends and values.

Just a head's up.

It would be more accurate to state Operation Civil War psy-ops are culminating right now.

This entire "sElection" we have seen it being ramped up, which was to be expected regardless of the way the election went. The social engineers, educated at the Tavistock institute have infiltrated all levels of our society.

originally posted by: UKWO1Phot
Multiple victims at a shots fired call at the Anti Trump riot..

Nah, is just sore losers making fools of themselves, it will die down when others just keep ignoring their protest.

I heard when it started last night and thought about how it could be the beginning of the civil war we've been warned about for so long.

There's a lot I could say but I'm not going to.

I haven't been watching the mainstream media and can't imagine why this would surprise them.

What better "gift" and payback from the elite than to give Donald a huge mess such as this after all of the calls by them for "unity?" It's a trigger word.

They're gonna act up and find themselves beaten bloody and incarcerated. 0bama ain't gonna be around in a couple of months to let 'em back out on the streets.

originally posted by: spiritualzombie
Such morons incapable of understanding basic human emotion. Yes, must be a psyop. Couldn't possibly be that people elected a bragging sexual assaulting misogynist racist authoritarian.

Yeah it couldn't be all the evidence that it is a psyop, now could it? 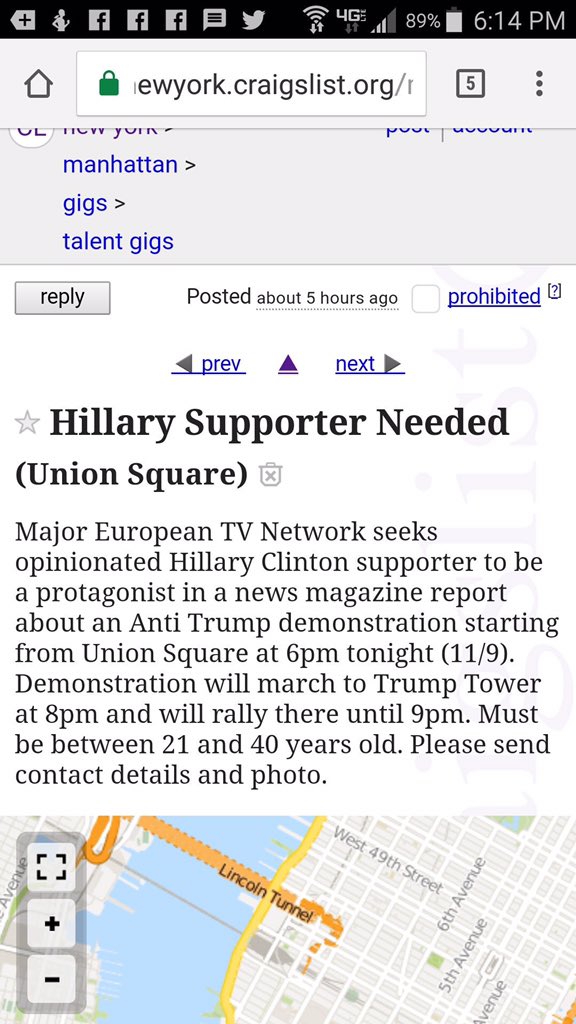 originally posted by: marg6043
a reply to: AboveBoard

Nah, is just sore losers making fools of themselves, it will die down when others just keep ignoring their protest.

They will stop soon. School and finals and getting home for Turkey day ...

Do you know what a Psyop really is?

No just a flash mob from loosers.

That's right, and then we have veterans day next Friday, a lot of social activities around too.

I wonder sometimes, even when I know we have the right to protest, I mean what the protesters expect that Trump renounce to his presidency and give it to Hillary?

Really, some people need to get over it.


originally posted by: UKWO1Phot
Multiple victims at a shots fired call at the Anti Trump riot..

Not related to the protest other crime.

oh and not a riot. Review film of WATTS and NEWARK NJ 1968 those were riots


They have figured out how to capitalize inthw situation and it's all I've CNN MSNBC an other news stations.

This is coming as a massive surprise to the Media...


What does this actually mean?