They are so desperate to present as Hillary is way ahead, that they will rig a online discussion board poll...it is pretty pathetic

The results have been messed with. At one point yesterday, Trump had over 7000 with Hillary at only 360 (I posted in this thread around this time).

Then in just a minute or two, Hillary's poll shot up to 663.

The poll has been messed with. You can't take votes away. Someone is manipulating the numbers.

posted on Aug, 17 2016 @ 08:37 AM
link
One good thing about this thread is that it does show that Polls are really meaningless. Numbers can be twisted and even changed to serve a particular agenda. Hopefully, those that read through the thread can fully observe this fact that a minority can easily make themselves seem like a majority through duplicity deceit.

The more troubling fact is that it's not only "online" polls that are being manipulated...

This is what happened in California this past June.. smh

posted on Aug, 17 2016 @ 09:24 AM
link
I find it really funny that so many Trump supporters are coming back to this thread crying about the more realistic results that are now showing, but they had no problem with Trump getting 7000+ votes in a short period of time.

According to the posts in this thread where people were updating counts, Clinton has been slowly gaining votes throughout the updates and Trump gains crazy amounts in short periods of time.

To me, it is now obvious that someone was trying to inflate Trump's numbers by voting multiple times and the website cleaned it up.

I know when reality doesn't coincide with your own personal beliefs, it is hard to accept. But it is better to accept them instead of denying reality. Every poll out there shows Clinton ahead of Trump, it's time to just accept that Trump just isn't very popular.

That's demented. Not to discredit this fine site, after all I love me some ATS, but why would you bother.

When Hillary's winning, its cheats and unfair.

How pathetic, somethings only correct if it shows what you want it to show.

posted on Aug, 17 2016 @ 09:48 AM
link
Although for me it is PROVEN that these numbers have been tampered with I really would love to know how many of you said:


"NONE OF THE ABOVE"


Because if you were really awake you would absolutely go this way. If you really want change you must change the system. Not support it by any means!

The political system is down the drain like nothing else. There is X-Keyscore, corruption, permanent lying, 6.5 trillion dollars embezzled and yet... how many of you still vote for candidates of this totally hopeless bull# system?

It was wrong then too, but go ahead and think that it's just cause of Hillary winning it's being said. I've been following this poll saw it go stupid in real time, from the silly unrealistic Trump at 97% to Hillary suddenly gaining votes at the speed of light.

I'm afraid you are really showing a lack of understanding of this thread and the poll, but are instead coming here and trying to be insulting to people.

I support neither Hillary nor Trump.

Towards the beginning of this thread, the first time I posted I pointed out that there was something wrong, as (at the time), Trump had over 6,700 votes vs Hillary's paltry 360 votes, that it seemed something was wrong with the poll and someone was messing with the OP. I said that here:

It was pointed out that: not just ATS members had access to the poll. The OP of this thread wanted to see results of ATS members, but due to where the poll is at, people outside of ATS would have access to it, skewing the poll (as in: non-ATS members voting).

A few hours later, Trump's numbers in that poll were over 7,000 and suddenly, it was dropped to 333.

Prior to this, I tried several times to add votes, vote more than once for the same person, or vote again for someone else: all attempts by me to do this FAILED.

But someone, somewhere, decided Trumps large numbers were not correct and removed over 6,700 votes.

That destroyed all credibility of this poll.

Then, within minutes, Hillary was having votes added by the hundreds. There were not that many ATS members logged in. This again showed that someone, somewhere was changing the poll numbers, and not by voting.

Again: that destroyed all credibility of this poll.

Does not mater whom you may or may not support in this election. Seeing poll numbers being changed should disturb everyone.

The only way we are going to see true ATS member polls, is if the site owners set up a poll that is internal to ATS, as was done last year back when there were a lot of contenders.

If any on here desire to see this poll, I highly recommend that you post in this thread here, asking for one:

The thread is only 1 page long........If you want the site owners to take notice, it will need a lot more members posting in it.

Do we need a poll to show trump would come out on top here? I mean really. Any thread in any political forum shows that.
Do his supporters need a trophy? An ATS poll would hardly be indicative of the general populous.
Have at it.
I won't participate. My vote would be alone.

How do I know? Because I went ahead and made an account on Poll-maker.com and made my own poll to see what settings there were. 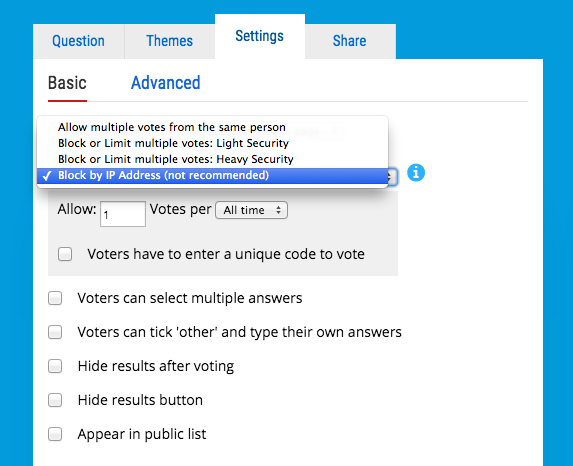 The poll would be to show what ATS members think.

We have done polls like this here on ATS several times, with the results being very educational. The polls that are done normally by SkepticOverlord do not just who got the most votes. In many cases SO also breaks down things like geographical locations.

The information in each poll that he has done over the years is very educational.

Just because someone does not support Hillary, it does not mean that they support Trump. That's tunnel vision, and very closed minded to think that. I would imagine an accurate ATS poll would show that. There will be many who do not vote for Hillary, but also do not vote for Trump. They'll either vote a 3rd party person, or the poll may even include a "Will not vote in this election cycle" choice.

Participating in the community should be something that any ATS member would be glad to do.


The OP needs to make this happen. I am curious as to how many votes were multiples and what candidate got the most multiple votes.

originally posted by: Hazardous1408
Someone clearly didn't like the results being 90% in Trump's favour and ruined what was a nice bit of fun.


Not so much a poll but a morals test and the results are exactly as I predicted.
I suspect some members here will be less than honest on admitting how many votes they cast.

I think it is pretty clear what happened with this poll. Someone tried to inflate Trump's numbers, and at some point those votes were thrown out.

Maybe the OP did it himself by changing the setting like another member just pointed out can be done. If the OP went in and changed the setting to only allow one vote per IP, then it is clear that the only thing that happened was Trump's duplicate votes were discarded.

I don't see an issue with Hillary's numbers, they aren't crazy like Trumps were.

I guess the question should be, were the past ATS polls accurate and representative of the final outcome?

originally posted by: kruphix
a reply to: eriktheawful
Maybe the OP did it himself by changing the setting like another member just pointed out can be done. If the OP went in and changed the setting to only allow one vote per IP, then it is clear that the only thing that happened was Trump's duplicate votes were discarded.

However: Hillary's numbers suddenly inflated also. I'm not talking about after an hour or so. It was suddenly within minutes over 400 votes were added to her total.

That is highly suspect. If those 400 votes had taken a couple of hours or more to appear, I would not be suspect of her votes (I was very suspicious of Trumps huge totals reaching up to 7000, in a short amount of time too).

I would feel the exact same way if it had been Hillary getting that 7k amount of votes, then suddenly gone and hundreds upon hundreds of Trump votes.

What this shows us is that any poll on the internet can be suspect, no mater who it seems to favor.

The reason that I would trust an ATS poll more than any other is because of the person that would set up and host the poll.

Yah, he's one of the guys I work for on here. But I would trust his polls on here a lot more than some random member, or random place on the internet.