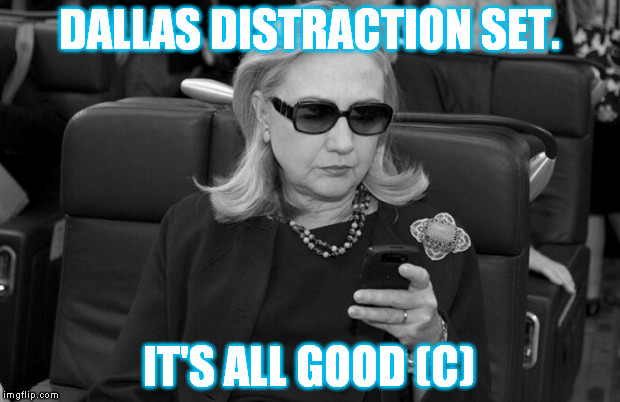 I know the social media world has devolved to memes to attempt at making a point.

But for all the love in the universe. This is ATS. We're better than that.


Are we? So you believe Hillary deserves better? Sorry I don't believe that! And yes I think it's as corrupt as my meme illustrates, I and only me created this as you call a "meme" not social media, but me, thank you and
edit on 8-7-2016 by Naturallywired because: (no reason given)

originally posted by: imitator
a reply to: atomish

right but he is the one in custody..... a suspect.

He turned himself in. He was not one of the ones standing off with police, apparently.

He may still be considered a person of interest still but it's pretty clear in those videos that he was not involved, at least in the initial shooting.

I suppose it is possible he was involved in a later phase of the attack, but seeing how willingly he complied compared to the suspects shooting back at the cops, I just don't think he was involved.

I could definitely be wrong, of course.

I know the social media world has devolved to memes to attempt at making a point.

But for all the love in the universe. This is ATS. We're better than that.


Are we? So you believe Hillary deserves better? Sorry I don't believe that! And yes I think it's as corrupt as my meme illustrates, thank you!

Are we better than childish internet memes? Yes

or at least I thought so.

I was drawn to the same conclusion. Going to be interesting couple of days ahead.

Where did I see these before?

right I agree, I'm just saying he is one of the the suspects in custody... they consider him a person of interest.... so far they only have one shooter for sure.

assuming it's the right guys in custody. don't forget the patsy prospect.

Their behavior. Some deserve respect. Others don't.

I can't tell. The video skips ahead after a group of people run into the building, and then snaps to the shooter standing behind a pillar.

We will find out in the coming days.

But it doesn't mean it was state sponsored.

Prayers to the families, curses to the perps. Only three days after the purge. I figured they were trying to trigger people with that. What's going to happen when rampage 3 is released??
edit on 7/8/2016 by AmericanRealist because: (no reason given)

How alive are they?

I hope not very.

originally posted by: JinMI
a reply to: projectvxn

I was drawn to the same conclusion. Going to be interesting couple of days ahead.


Agreed. Whoever these guys are they produced a casualty rate comparable to a veteran soldier. They moved well and employed discipline in their attacks.

I've only ever seen something like this in one place before. Afghanistan.


Where did I see these before?

originally posted by: Jaellma
Is anyone thinking these may be hired mercenaries hired by factions within the LEO community to take out their own cops to create more tension between cops and the community.

It sounds far fetched but something doesn't quite add up to what has been reported so far.


The cops are pawns in this game too. Don't doubt that.

Didn't they say a black mercedes benz? Unless you're mentioning a different vehicle then the one the suspects were in.

What mercenary would put himself into a position where he would be taken into custody?


It would be one who doesn't believe in 1000 Virgins martyrdom, who wants to train others, while on death-row for a couple of decades.

What do you make of the guy working inside and another outside? Think they were in communication or had a very well laid out plan?