YouTube - Volcano Eruption in Papua New Guinea
This is the only time I know of that an explosive volcanic eruption has been captured on video and audio that the public has easy access to, so you can listen to what this sounds like and compare.

im tellin you its the plane

originally posted by: cado angelus
Just put together a simple map showing the UK points where it was heard. 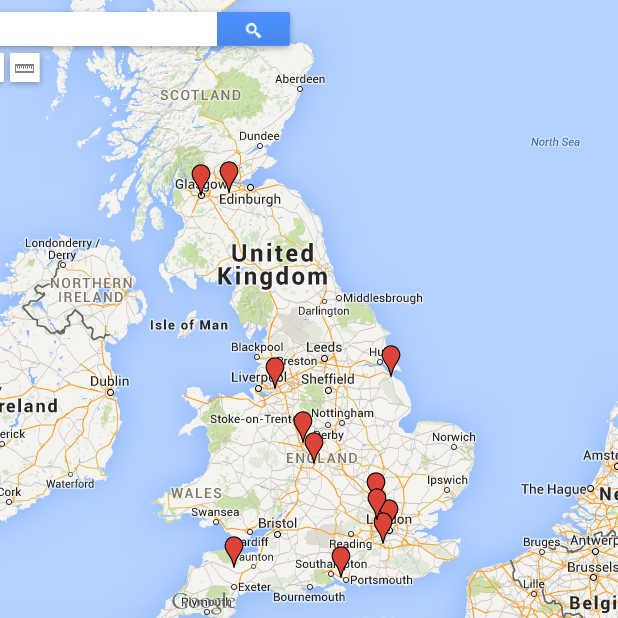 posted on Nov, 30 2014 @ 06:24 PM
link
lol angelchemuel , Well, apart from coming in from the west (which would fit with New Yorkers hearing it) and then veering it has a route north looking fairly straight.

For the record we heard it too here in South London and thought it was an overly loud base from a car radio but it went on too long and too static for a car to just be driving by - a definite base, heavy beat pulse.
edit on 30-11-2014 by slidingdoor because: to add my reply to person

posted on Nov, 30 2014 @ 06:31 PM
link
a reply to: slidingdoor
Well, looking at that map.....I still say the pilot was drunk!
Coming in from the west through Cornwall and Devon....straight up Offa's Dyke (Welsh border), Lancashire up past the Lake district, the A70 wotsit past Gretna to Glasgow... for Stirling....up the Trossacks...into Kinloss....job done.
So whatever went on in London....and there would appear to have been a lot of it....doesn't fit.

PS....and like I said...if it came in via New York....why haven't there been any reports from Ireland.....there's a 'wrong piece of the jigsaw' here

Wow well done Cado that is really good . Thank you.

the plane took off from West Point Airfield and landed in Coningsby, England 16 min. later

posted on Nov, 30 2014 @ 06:47 PM
link
I'm about 370km NW of Buffalo NY. Although I did hear the noise around the same time they reported it down there. What I heard was more a series of muffled explosion type booms spaced out over several minutes. Maybe they are unrelated.

originally posted by: Maddog5595
I'm about 370km NW of Buffalo NY. Although I did hear the noise around the same time they reported it down there. What I heard was more a series of muffled explosion type booms spaced out over several minutes. Maybe they are unrelated.

Did you listen to the audio tape of the noise ? - it can be accessed via the Daily mail link above and in the initial post .

posted on Nov, 30 2014 @ 06:56 PM
link
And actually that makes sense with relation to the A1 motorway closure. I am ex-British Army, my first posting was to Catterick Garrison. Marne Barracks (now home to the Royal Artillery) was an RAF base and the runway is still there. Perfect landing site. There's also a fully functional RAF base also on the A1 about 20 miles south.

originally posted by: Jesmin
The Daily Mail now reports that it was a test aircraft with Pulse Jet technology: www.dailymail.co.uk... se.html

If that's what they make spy planes sound like nowadays we are in real trouble.

the plane flies at 5,000mph about 7,000kph and at a altitude of max 150,000 feet 50,000 meters and only has to decrease altitude for landing 50 miles from its target also slowing down of course and a sonic boom at that speed would be heard all over England its just a matter of who is listening.FS-50


originally posted by: Maddog5595
I'm about 370km NW of Buffalo NY. Although I did hear the noise around the same time they reported it down there. What I heard was more a series of muffled explosion type booms spaced out over several minutes. Maybe they are unrelated.

Did you listen to the audio tape of the noise ? - it can be accessed via the Daily mail link above and in the initial post .

yes I did and what I heard sounded more like the tape then a single earth shattering boom.

Uhm, that's the Boeing Bird of Prey. It's not flying anymore and hasn't for a long time now. I love how the link claims it's Iran's new fighter, when it clearly has Boeing painted on it.

There is no FS designation in the military. F is a Fighter, S WAS Strategic. So you're saying it's a Fighter/Strategic? Strategic what? That makes almost as much sense as the TR3B designation meaning Teledyne Ryan 3B.
edit on 11/30/2014 by Zaphod58 because: (no reason given)

posted on Nov, 30 2014 @ 08:41 PM
link
Did it look loke thousands of fashing cameras in the distance taking pictures at the same time?

I have absolutely no idea!

I was out all night in early June 2013. There were lights all over the place. Not like lightning, but little flicks everywhere. There were booming sounds in the sky, too. I went up to a high vantage point and could see the flashing lights over the whole landscape. This was in Cornwall. I was so gobsmacked walking around in this craziness. I had my friend's dog with me who was loving it and very excited. The lights were definitely not lightning. The sky was clear of clouds.

Everyone I have spoken to was not awake and online there have been no accounts. Only one lady I spoke to had any notion of it and she called it a meteor storm. It was not a meteor storm, lol. I am still scratching my head and have no idea what was happening there.

Is there some sort of atmospheric phenomenon at work that we are not familiar with?

EDIT: That event lasted for about 2 hours.

originally posted by: TopTopic
a reply to: Maddog5595

I'm in no way saying it wasn't a plane, but as I stated before I was an aviation electronic technician for the United States Navy. I have been around my fare share of aircraft. This could have been some sort of new propulsion technology but what I heard was NOT sonic booms. I just got done talking with a few neighbors that heard it as well. I called a friend of mine that runs the Stone quarry 15 miles south of here and he informed me they are and have been done for the season.
edit on 30-11-2014 by Maddog5595 because: (no reason given)
edit on 30-11-2014 by Maddog5595 because: (no reason given)