posted on Oct, 22 2014 @ 01:21 PM
link
Wow this is what the department of homeland security is doing here in Kansa City. A local store was raided by DHS and the printer put in handcuffs, for selling underwear that had a KC on it.

I cant believe the Royals think they have all rights to anything that says KC on it in the city of Kansa City.

I am pretty sure homeland security has a lot better things to do then raid underwear stores for a copyright violation.

I don't think its even a trademark violation. since when can they trademark a KC? Here is a picture of the panties 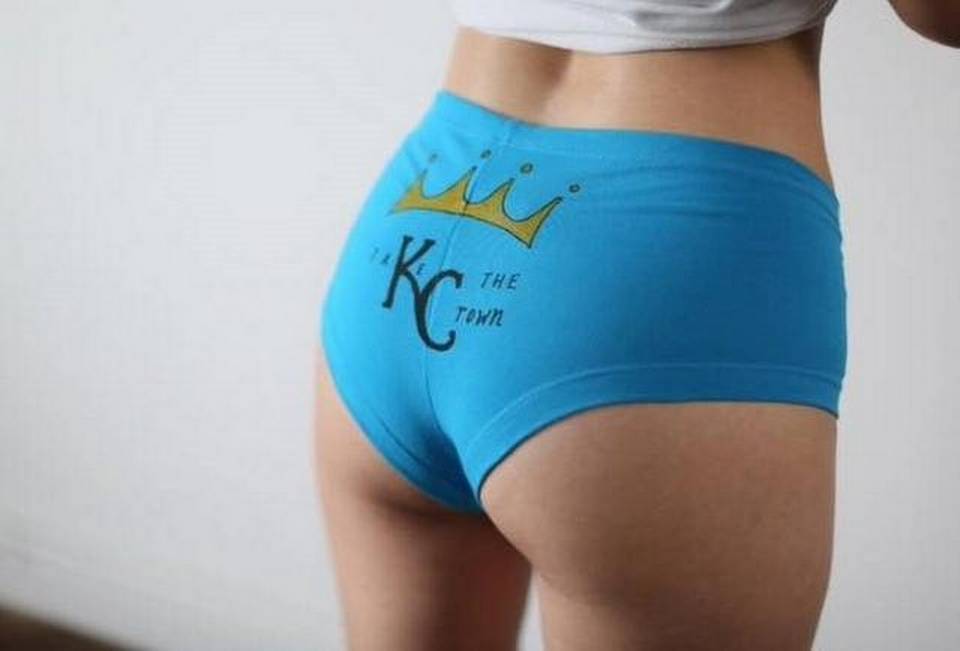 The royals said it is to close to their trademarked KC which you can see in my avatar. I say bull shyt ,

But don't you guys all feel safer now that those panties are off the street? What a joke.

The Kansas City Royals are America’s favorite team because they’re plucky and small market and not big and corporate and Evil Empire. At least that’s the narrative people have been lapping up.However, this story may just make you change your mind about the Royals and what they represent.

There was this lingerie shop in Kansas City selling these cute panties emblazoned with the slogan “Take the Crown” and a KC logo.

I didn't even know the Royals were still around until a few weeks ago..lol

posted on Oct, 22 2014 @ 01:34 PM
link
What the hell does DHS have to do with copyright infringement? If they're enforcing copyright, there needs to be a serious revamping of their modus operandi.

Isn't it the job of their lawyers to do that? I can understand sending a letter saying cease and desist and maybe a court action if they don't.

Anyone that thinks the government is not the strong arm of the corporate infrastructure, here is a good example of it.

originally posted by: alienjuggalo
I don't think its even a trademark violation. since when can they trademark a KC?

I can understand why the royals would see that as a possible copyright infringement, they would probably hire lawyers and fight about the proceeds and legality of this in court...and have the court decide liability issues

But the department of homeland security? Raiding an underwear shop over a [POSSIBLE) copyright infringement?

That is a CIVIL issue, not criminal... and HOMELAND Security? Seriously? What... are they protecting the HOMELAND from UNDERWEAR now?

Is the underwear going to kill innocent people? Seriously?

posted on Oct, 22 2014 @ 01:46 PM
link
OK, I'm a KC resident, too, but think of it this way: This is why the Patent Office specifically removed the trademark protections on the Redskins Logo ... so that anyone and everyone can use it and not have to pay the team for the rights to do so. It's part of the effort to force the Redskins to knuckle under to the pressure of the PC police and change their name and image because it has been deemed "offensive" by the teams' "betters." It is hoped by those who made the political move that the loss of trademark logo revenue from merchandising will force the owner to change it.

That's why teams fight so hard to protect their name and image, it's money, and for a small market team that doesn't even break even ... any little bit helps.
edit on 22-10-2014 by ketsuko because: (no reason given)


originally posted by: alienjuggalo
I don't think its even a trademark violation. since when can they trademark a KC?

Here's the thing. If they would have had a little space between the K and the C it would not have hurt the sales at all.

It does not say royals or MLB, it just has a KC on it. How can they think they have the right to everything that's has a KC on it?
edit on 22-10-2014 by alienjuggalo because: (no reason given)

Homeland Security getting involved? Not unless the maker or seller are suspicious foreign nationalists and it just a reason to get them in custody or something like that.

What soccer team does the KC play for?

They feel the pain! This is bad for the economy!

It's the exact same logo, crown and kc (just spaced instead of together), and the words are exactly the same, and only one letter different. Town instead of crown.

The copyright infringement would probably hold up in court, changing only one letter and one part of a slogan is an attempt at infringing a copyright without legal ramifications at any rate...

But it still wouldn't require homeland security. This is still a civil matter. Homeland security has nothing to do with civil cases... that in and of itself has far reaching implications. VERY far reaching.
edit on 22-10-2014 by OpinionatedB because: (no reason given)

originally posted by: alienjuggalo
It does not say royals or MLB, it just has a KC on it. How can they think they have the right to everything that's has a KC on it?


There's a curved connection between the K and C, and a golden crown over the top.
Visually, it's near enough an exact copy.
I don't see that the defence have got much of a case.

I can remember when Harrod's of London were pursuing every Harrod's in the world, including a butcher in New Zealand whose surname was Harrod.
Copyright lawyers are deadly. Don't cross them.

posted on Oct, 22 2014 @ 01:59 PM
link
According the manufacturer's site, Birdie's Panties, the product is named Lucky Royals Boyshorts Blue. I am guessing that it is having the KC along with the Royals in the name which is the infringement.

And if they had just made the one pair of panties and not attempted to make a profit off it ... no worries, but when they try to make money off something that's so close to the logo that it might as well be the logo, they opened themselves up for this if they got discovered.

And theres me thinking " what the hell have the british royal family got to do with a K and a C."
If it was'nt in the part you quoted that they are america's favourite team i'd still be puzzled by it...
We're not all americans y'know

Let me tell you this from experience... when you have a trademark you are pretty much obligated to defend it by any means necessary or you deal with the possibility of losing that trademark. I know this because I had to go head to head against AOL back in around 1999-2000 ..

I created a piece of software that was entirely free, it connected to the ICQ messenger network and carried on automated conversations with random people.. it had a simple AI engine and made for really hilarious entertainment... I created a website for it called icqbot.net ... their lawyers came at me like vicious animals citing all sorts of trademark laws..

Their first maneuver was that it might confuse people into believing my software was the official ICQ software which is a legal argument they CAN make to win their case.. but they failed, I had notices on my site and links to their official site already in place.

Their next argument deals with dilution.. if they allow others to use their trademark ( Logo or phrase.. etc ) it dilutes that trademark.. so their are legal obligations for them to defend their trademark or they risk losing it.. They failed there too, my site clearly stated it was a fan site and purely for entertainment .. as such, I had fair use of their trademark.. I wasn't profiting and fan sites are allowed that privilege.

I did lose about two years later however... that lawyer watched my site like a hawk.. one day he was on there and I had installed this free chatroom software .. that software popped up random rotating ads.. he took a screenshot of one of AOL's ( aol owns icq obviously ) competitor's on there which is a no no for me... I can't use their trademark and display ads for their competitors... I lost my domain .. they held it for 13 years and recently let it expire... I bought it back .. I had no control over what ad's were displayed so I didn't even consider that risk.

Sorry it's a long story.. but just explaining.. organizations/companies will usually aggressively defend their trademarks because the way the law is structured, they are obligated to... as for DHS being involved?? I have no idea why that would be necessary.. it's not a criminal matter, it's a civil matter and is usually handled in arbitration .. I also believe the Royals have to make a formal request to cease and desist before they take action.. so my guess is this place ignored them..
edit on 10/22/2014 by miniatus because: (no reason given)