Man Has Sleep Paralysis, So He Sets Up A Camera... 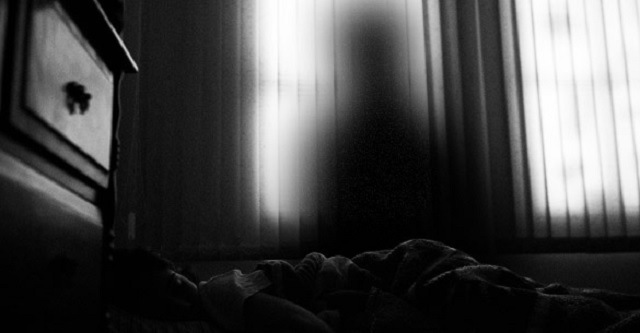 I had sleep paralysis for the first time a few nights ago. During the paralysis I saw an ominous black figure at the end of my bed. It was terrifying. I was sure it was just a hallucination, but after doing some research I found that many other people have reported seeing a similar black figure.

The next night I felt a dark presence in my room but I didn't see anything this time. So the night after, out of fearful curiosity, I decided to leave my light on and set up my video camera to record through the night.

What I have found has scared the crap out of me, but also made me think that what I saw was real! I nearly missed it on the video but I noticed a small spike in the audio signal so I looked at that part of the footage. Hear is what I saw...

I knew that you would want to see this and try and figure out what's happening in this video along with me.

I have experienced sleep paralysis, and I know that many of you have too.

What has Mike Pike captured here with his video camera? A shadow on the wall? Is it the first video capture of the sort of "shadow entities" related to sleep paralysis? Or is it some sorta hoax?

I just found it so the jury is still out as far as my opinion is concerned, but I'd love to hear what you all think.

In order to know if someone in the room did not hoaxed the picture you need to be seeing the whole room.

Perhaps some sort o quantum/dreamstate manifestation. I hope other people that suffer from SP will make videos as well.

Honestly, I didn't see it in the first video, but only on the analysis video. It looks kind of cartoonish.

posted on Jul, 20 2014 @ 01:56 PM
link
Something reflecting from outside through the window. It looks like there are no shades or blinds on the window.

Or he passed gas.

posted on Jul, 20 2014 @ 01:57 PM
link
My initial gut feeling when I played it a few times was a car passing by and its headlights are shining through or behind and object. As the car passes the windows line of site, the shadow stretches and disappears. I had to play it twice just to be sure I even saw something.

The image in the video is very feint unlike the photo image above it and strange almost anthropomorphic.
An enhancement by filtering out all the darkness from the base brightness of the paint where it appears to the left of his sleeping form and just over his body would perhaps make it more clear, it seems to me though to either be lifted out of him or appear beside him then lift away with trailing arm's that seem to reach down toward him.

All I can say is interesting, now when I used to suffer it there was a definit paranormal element and I used to wrestle with whatever it was usually breaking it's grip, for me it was a sensation of hot head and suffocation coupled with an inability to move, I overcame the movement though it was like moving through treacle and very slowly but would wake up with a start as soon as I began to move as though I was stronger than what was holding him at that time.

But I do believe natural sleep paralysis is also real and is simply caused by the same mechanism in the brain where your body is stopped from enacting dream's in reality, so it is there to protect you from injury and in people who sleep walk it is a broken mechanism.
Most who suffer sleep paralysis do so as there conscious mind has awakened though there brain is still locked in sleep mode as far as movement is concerned and this can be terrifying though natural sleep paralysis only usually lasts at most a second or two.


Looking at the video analysis I am going with vampire or energy leech type entity.
edit on 20-7-2014 by LABTECH767 because: (no reason given)

But then on the flip side when people do keep a camera with them and capture something, or set up a video camera to capture evidence...

It's immediately set down as a hoax.

Exactly. This is the issue with convincing skeptics...


That was certainly an eerie video! Seriously creepy, what gets me is. That shadow is WAY to light to be an actual shadow IMO.

What I am saying is - if the guy is hoaxing this using a lamp and his own shadow....this guy must be transparent, because a real shadow cast by something (especially standing right in front of a lamp) would make a much darker shadow than that, IMO.

Of course I guess you could argue the camera simply made it appear lighter than it would to the eye. Idk. great video - he should keep doing it every night.

Why that particular angle? A nice blank wall to capture the shadow.

If I was aiming the camera...I would have had more of myself in the shot to show a relationship to the experience.

posted on Jul, 20 2014 @ 02:23 PM
link
Bare with me because I'm using an Ipad. Here is a still shot from the actual video when the shadow moves up the wall. I switched to B&W so you might see the shadow better. (Actually I uploaded the original but you can still see it) 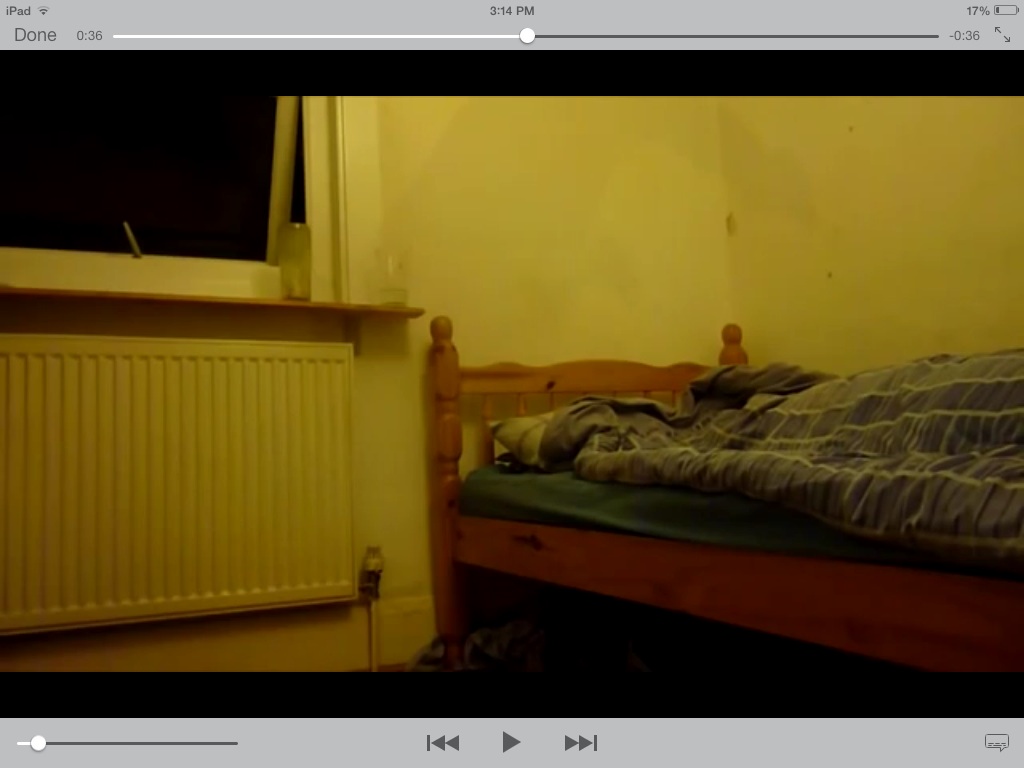 Notice the overall shape matches that of the window itself. That which appears to be an arm with a hand is really the two glasses of water in the window seal. Notice also below the bending arm there is a circular bend "bulge" which is the top of the smaller cup.

So possible a passing car whose headlight's have cast the illumination, still one hell of a spook video.

originally posted by: LABTECH767
a reply to: Rosinitiate

So possible a passing car whose headlight's have cast the illumination, still one hell of a spook video.

Easy way to disprove the theory would be to see the whole 6-10hr sleep video. Surely more than one car would pass by.

posted on Jul, 20 2014 @ 02:36 PM
link
Sorry but my bs detector has emploded and has created a black hole !
I have sp but don't suffer from it I enjoy it !
This vids going on the bs shelf In between
The bible and fish thread !

A nice blank wall to capture the shadow.

Yeah, you got it, the nice blank wall also provides and excellent canvas for compression artifacts. My first guess was something creating a shadow on the wall from an opposing hallway and that the cheap camera was having trouble resolving it.

The reason I first discounted it in my post was that the CCD would in my old sony camera have adjusted to the ambient light increase to create the shadow and the whole scene with my camera and it's old CCD would have brightened then darkened as the the sensativity of the camera adjusted to the varience in luminence level's but if the car was a good way away with dipped headlight's it would be cause by low luminence ambient scatter.
A digital analysis of the wall area untouched by the shadow but adjacent to it would show increase in luminence while the shadow was projected if this is the case followed by a decrease after the shadow ceased to be projected.

I was watching the quilt/duvet for movement and there's nothing discernible which raises the question of whether anyone's even in the bed? It could be a still shot with effects added.

This possibility is strengthened in my view when we consider how many sleep labs have been studying SP for decades. They sometimes include more than one camera and haven't yet recorded shifty, dark shadows. Given the limited field of the footage, it might not imply a set-up, but it doesn't rule it out either. Neither does it tally in with the standard descriptions (or Pike's) as that subtle shadow wouldn't be visible if the lights were out.

Many people have experienced episodes of 'dark figures' near the bed and I'm one of them. Sleep paralysis, hypnagogic or hypnapompic hallucinations account for these incidents rather well and they'll do for me. On the other hand, I've also had a couple that don't fall so easily within those explanations. Rather than be sure of a black swan outlier, it stirs in some of that cognitive dissonance sauce that doesn't taste too good.