I'm sure there must be others here that remember the thrill of exploring the Zone and the absolute terror of meeting this guy... 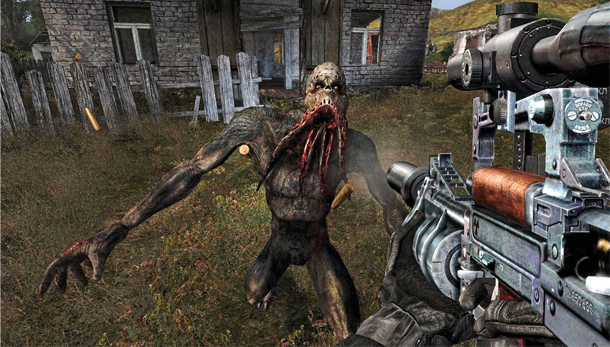 Well Stalker if you do the Zone is calling , a team of modders started to mod the game in 08 to restore the parts that were cut from the game back in 07 but with the collapse of game developer GSC Game World the team decided to expand the project to fix the original and add new stuff ....a complete reworking....

We started to develop Lost Alpha in the summer of 2008. The project first started out as a modification to add back the cut levels which all Stalker fans knew of. After a while, it became more than just a modification, it became our dream game, how we saw S.T.A.L.K.E.R.
We hope to give you the same feeling when you first played S.T.A.L.K.E.R. A new chapter with familiar elements without which S.T.A.L.K.E.R. would not be the game we all grew to love. Lost Alpha was a labour of love. We are passionate about it and we hope you all will enjoy it as much as we enjoyed creating it!

So if you're a veteran Stalker or new to the Zone S.T.A.L.K.E.R. Lost Alpha has now been released and is FREE for your enjoyment , you can pick it up from Here or at you favorite BT site.

I believe it would be okay to give this tip, easier to download it by Torrent from a Torrent site...

As its one file, as opposed to the throttled download.

I look forward to trying it out as I loved the game.

I'm playing through Priboi story now so I know I'll like this.

But be warned that the system requirements are high.

Gonna give it a shot, hopefully it'll work. Cheers

*edit/update well I click the link for the first of four downloads and get some long thirty second video ad, then when that's done there's another 30 second ad, rinse and repeat. No Stalker for me :/

Why can't "click for download" just work anymore? Why do they have to, no mattter what, make us jump through hoops until its too frustrating to continue?

I've started the game and so far no problems, the start of the game is different to the original and the whole area has had a redesign , so far it's good to be back in the Zone

If you're running a 32 bit operating system(like me) follow these instructions if the game won't start...
Anyone who uses 32bit operating system should remove the msvcp120.dll, msvcp120d.dll and msvcr120.dll from the game's bins directory. That will solve many problems. Also before game start, you can delete the user.ltx too and let the game create a new one based on your system specs.

Just because STALKER was such an awesome game....have to share this video.

-Thought computers got more powerful as time went on!

Maybe it's a driver issue..


Free? It's a mod that requires the full game to play.


It's standalone nothing else needed.