A group of Russian scientists in Antarctica has succeeded in drilling to a lake buried two miles beneath the icy landmass, Russian news service Ria Novosti reported -- following a week of radio silence from the team that had some scratching their heads.

“Yesterday, our scientists stopped drilling at the depth of 3,768 meters and reached the surface of the sub-glacial lake,” the source reportedly said in a story posted Monday, Feb. 6.

The article goes on to say :

The team from Russia's Arctic and Antarctic Research Institute (AARI) had been drilling for weeks in an effort to reach isolated Lake Vostok, a vast, dark body of water hidden 13,000 ft. below the ice sheet's surface. The lake hasn't been exposed to air in more than 20 million years.

A brief break in communication with colleagues in the unfrozen world had some asking questions about the scientists, as Antarctica’s killing winter draws near. But despite the lack of info and onset of winter, which brings temperatures as low as -80 F or colder, the team was never in danger, Priscu said.

"They are very capable scientists and drillers and the thought never entered my mind that they are in any kind of danger," Dr John Priscu told FoxNews.com.

Priscu, a microbiologist with Montana State University who has worked on a similar Antarctic exploration program, is one of few sources of information on the scientists. They hope Vostok and other subglacial lakes buried beneath the continent may offer a glimpse of extreme new forms of life.

The buried lake may be similar to the conditions on Mars and Jupiter’s moon Europa, Ria Novosti said.

If some primitive bacteria or even more complex life-forms are found to have survived the isolation, it could offer an earth-shattering insight into our planet’s past.

When drilling work began around Vostok Station in the Antarctic in the 1970s, scientists had no idea a mysterious lake lay under the massive ice sheet. It was only in 1996 that Russian specialists, supported by their British counterparts, discovered with sonar and satellite imaging what later proved to be one of the world’s largest freshwater reservoirs. In size, Lake Vostok matches Lake Ontario.

After the 24-hour-a-day drilling work is over, scientists are to take samples of lake water which penetrates through the crack. Specialists at the Russian Arctic and Antarctic Research Institute predict they will find “the only giant super-clean water system on the planet.” The pristine water will be “twice cleaner than double-distilled water,” they believe.

The Vostok Antarctic research station is no Bali resort. Its temperatures average around –66 degrees Centigrade. Earth’s the lowest ever temperature was recorded there on July 21, 1983, when it hit –89.2 C. 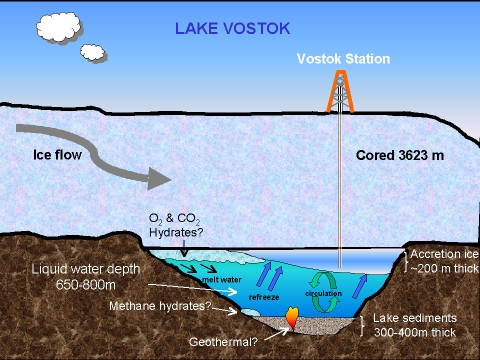 So after a long 30 years of drilling and a few scary days last week where there was no communication from the Russian team they have finally made it to one of the few remaining unexplored places left on the planet. This is a triumph for the Russians hard work and perseverance in what has to be some of the harshest conditions on the planet.

I for one am very excited about what they might find. I first heard about the mysterious 'hidden lake' about 10 years ago and the possibilities of what a completely closed ecosystem may contain can really make the imagination run wild. Will they find ancient animal life or maybe undiscovered virus's and bacteria? Also will they share any discoveries with the rest of the World scientific communities?


its the undiscovered bacteria and viruses that alarm me!
remember small px and indians,or t.b. and south america! what about the swine flu in the early 1900's?
or even maybe some lost alien,like in the x-files movie!!! (thats a stretch!) or maybe the remnants of atlantis!

I'm glad to hear that those scientists are safe. I'm also looking forward to seeing what they find in that lake. Thanks for the interesting post!

why is the truth so funny

I am really excited about this....

Couldn't we essentially create a lab at the bottom of the ice? Could divers survive down there with a ground zero base?

Imagine if they are right and Antarctica was at one time tropical! This lake would have had all sorts of life forms in and around it. I think they will find some of the oldest traces of life down there..

Does anyone know what the overall plan is? Do they plan on exploring immediately after the samples are analyzed?


Haha just what i was thinking.

But on a serious note.

What the hell is down there? Probably some clean ass water!


I think any diver would have to be totally crazy to want to go down there. If something went wrong with the tunnel it could be a long time before they could unblock it for any kind of rescue. Just the thought of it gives me the shivers.


Naaa, I steel shaft straight down with an elevator would do the trick. Container style labs at lake level. Wouldnt be such a bad place to have a ELE event hiding spot eh?

Asktheanimals
+10 more
posted on Feb, 6 2012 @ 11:44 AM
link
I'm wondering how much of this is about science vs a giant reservoir of clean water.
At the current rate of pollution clean water may become more valuable than gold at some point.
Watching Fukushima that time may be closer than I'd like to believe.


Naaa, I steel shaft straight down with an elevator would do the trick. Container style labs at lake level. Wouldnt be such a bad place to have a ELE event hiding spot eh?


One shift of the ice and that steel shaft would be crushed.

I had damage to my lake frontage 6 years ago from ice heaves in the spring breakup, chunks of ice the size of VW's destroyed my concrete block boathouse and pushed the lakeside concrete slab up to a 60 deg angle.

Now magnify a VW sized piece of ice until it is big as Antarctica, thats a lot of force.

If they do find complex life down there it will change a lot of minds about the origins of life.

Sea creatures that live in the deeps of the ocean survive on waste that falls from above. No waste drifting down into these depths, and so sunlight, so no plant based life to use for food.

If they find fish, they will be very funky fish.

I live in Michigan.... Ice sheets destroying property is a common occurrence around here.
Yeah, I see your reservations and raise you an imagination. 1st, create a larger opening, with dampening arms to anchor to the ice. The steel shaft would be shaped like a star with a rectangle center. When the ice shifts the 4 corners would cut into the sliding ice like a razor knife.

If they can make a product like Rum Chata they can surely accomplish this.


Thats a good point Asktheanimals when you think that bottled water is selling for more that oil right now.

I could give a rats behind about the life forms.. I am skeptical of anything worth viewing as far as life forms go.

I am going to assume with little proof that Antarctica was once tropical. This lake and its borders would be a very VERY good place to find some of the original traces of life.

Take North America... There could have been cities like we have now..(millions of years ago). But over time, concrete and nearly all metals would have turned back into earth. Below that ice, things will be preserved like it was yesterday.

Originally posted by Asktheanimals
I'm wondering how much of this is about science vs a giant reservoir of clean water.
At the current rate of pollution clean water may become more valuable than gold at some point.
Watching Fukushima that time may be closer than I'd like to believe.

I was wondering if it is more about trying to figure out what caused the last extinction level events, or the previous pole reversals. We really don't know what to expect, since we have not been around for one.

I could give a rats behind about the life forms.. I am skeptical of anything worth viewing as far as life forms go.

I am going to assume with little proof that Antarctica was once tropical. This lake and its borders would be a very VERY good place to find some of the original traces of life.

Take North America... There could have been cities like we have now..(millions of years ago). But over time, concrete and nearly all metals would have turned back into earth. Below that ice, things will be preserved like it was yesterday.

Both would be important.

New life forms would tell us with almost 100% certainty that we are not unique, that life exists everywhere in the universe.

And since we know that the North Pole region once had palm trees and an average temp of 74 deg, it stands to reason that the South Pole had a similar climate at some point.

I believe that advanced civilizations have inhabited the planet before us, maybe even more than one. There is way too much evidence that supports this. Modern archeology tells us that in 1,000 years we went from grunting in caves to developing advanced math and construction, and learning more about the starts than we know today.

Life after people was one of my favorite shows when it was on. We only rearrange elements to fit our lifestyles, once we are gone they will revert back to basic elements again. Some take longer to break down, but as old as this planet is there has been plenty of time.

Originally posted by Jakessw
Sweet! I can't wait to hear nothing about what they find down there...

Agreed. - smile...
Whatever interesting they will find, it will be kept under wraps.
I am glad they completed the drilling, finally...

I wonder what is the TRUE cause of the magnetic anomaly at Lake Vostok,
and I would be very curious to know the TRUE reason why the lake is so warm.

But we shall never know, right?