What are the odds against two terrestrial like monuments on such an alien planet and in essentially the same location? It seems to have been built in such a way that the inhabitants would have enjoyed a perfect, almost ceremonial view of the Face.

The Mars pyramids and Egypt pyramids are pretty much look like the same thing, from above anyway.
That could suggest they were both built from the same source...
Unfortunatly we will never know for sure untill either nasa tells us the dam truth or untill we send a man up there with a camera.

For now, these arial photographs will have to do...

Dr. Horace Crater's Diagram of alignments within The City showing mounds arranged in equilateral and right triangles on a grid with the ratio of one to the square root of two.

The geometrical D&M Pyramid points to the Face at a 19.5 degree angle relationship to the center of the City

Is this all just coincidence?


yeah like he said
your pic is clearly animated,

myne are not animated.

posted on Sep, 7 2008 @ 10:33 PM
link
If the Mars version of our Great Pyramid is indeed a structure, it would make sense as to why it is decaying and eroding, with elements and rock eating and covering it due to the fact that nobody is taking care of it anymore. I dunno, I know a lot of people will say "rock-formations" but regardless, you have to admit there are some EXTREMELY strange coincidences occurring here, especially in regards to the region (as the OP pointed out they're essentially the same location). The thing that gets me is that the whole Face thing has been debunked, and de-debunked so many times that it's almost like "Who cares." The pyramid structures though have always fascinated me.

Adding to this, haven't there been similar structures found on the moon as well? I might have hallucinated that though, I'll try and dig up some info on it. If not, 2 out of 3 ain't bad. Why don't we just send the rover there? Oh yeah...NASA

I could create a more convincing landscape than that NASA colour image using Bryce 3D even if I was drunk.


I guess it's really easy to find similarities if you ignore certain other terrain features which don't 'fit' into your model.

I'm sorry, I'm going with natural structures. I would love for there to be alien cities on Mars, but I've yet to see anything convincing....and yes, I have been visiting ATS for years, and I have read lots of threads to do with this topic.

I feel it's a case of 'wishful thinking'.

Originally posted by Phage
How about this one, higher res and different lighting:

EXCELLENT!!!! You found another face on Mars KEWL Great job

And THIS picture is the Lion that Masqua found.... its not NASA but ESA Mars Express Complete with Whiskers 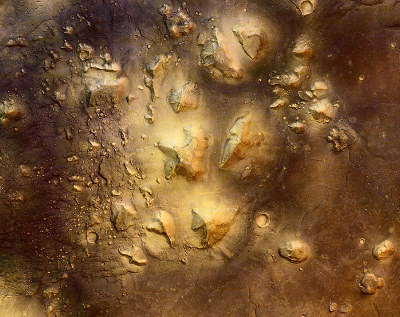 posted on Sep, 8 2008 @ 01:18 AM
link
I have to admit after surviving millions of years of mars dust storms the cydonia pyramids are not so triangular as they used to be,
But they do resemble a pyramid.

posted on Sep, 8 2008 @ 02:41 AM
link
The top 'pyramid' doesn't look like one at all. And while the Earth pyramids actually do mimic Orions Belt, the Mars ones do not. The top pyramid is actually lower, NOT higher, than the other two.

It's three peaks of mountians/hills, nothing more.

I could probably take a bunch of photographs of the Rocky Mountains, and find dozens of 'matches' with the Orions Belt. It means nothing.

Originally posted by SuperSlovak
I have to admit after surviving millions of years of mars dust storms the cydonia pyramids are not so triangular as they used to be,
But they do resemble a pyramid.

Here is a pyramid pair in China after much erosion 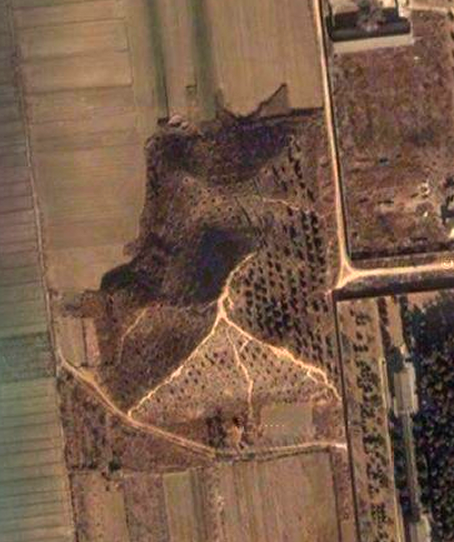 posted on Sep, 8 2008 @ 05:29 PM
link
Come on, now. Aren't you playing a little fast and loose with the exactness of the measurements? Draw some thinner, more accurate lines and suddenly the alignments are off quite a bit, throwing the whole "advanced" engineering notion right out the window.

And what about the differences in the sizes of the pyramids? Also, you can fudge a little bit and claim erosion, but then you really should justify exactly why you chose a particular point or angle over another equally plausible one.

Try it again with a newer image, without the fat crayons and show me what you come up with. Here's a little help. Uh-oh, what happened to the "alignments?"

posted on Sep, 8 2008 @ 06:23 PM
link
Oh, and here's another little thing. The ancient Egyptians deserve a lot of credit for organizing themselves enough to build the Pyramids, but let's not give them any more credit than they are due. As for them being incredibly accurate with their representation of Orion, this composite photo shows that they were either less accurate than you might think, the aliens were less help than previously thought, or maybe the whole arrangement is just a vague, lucky coincidence:


fast and loose? not really... my allignments were made by a mathematical professor studying the cydonia region for years
yours could have been made by a 2 year old

"Alignments" which allow a large margin of error in order to "align".

"Alignments" which select features that fit and ignore features that don't. With the number of features in the area it would be possible to find just about any "alignment" you want, especially if you are looking for a particular alignment. Give me two years, I'll find my birthday, social security number, and my mother's maiden name there too.

This is a perfect case of selecting, fudging, and manipulating data to make your case and ignoring data that refutes it.

From a real mathematician

Originally posted by Nohup
As for them being incredibly accurate with their representation of Orion, this composite photo shows that they were either less accurate than you might think, the aliens were less help than previously thought, or maybe the whole arrangement is just a vague, lucky coincidence:

Thanks for sharing, but have you also checked to see what the relationship of the stars was to each other at the time that the pyramids were built?

I think it would be only fair, considering you are basing your judgment on how the stars look today

posted on Sep, 8 2008 @ 10:58 PM
link
Your headline "Mars pyramids identical to earth pyramids!" is misleading. Among other things, the layout is far from identical. In fact it's pretty bad. Either the Martians or the Egyptians weren't trying very hard. Your source seems to have ignored this fact.

This is the image of Giza that I used to overlay the Cydonia image. I have outlined the bases of the pyramids for clarity on the overlay. Also, both overlays were resized and rotated slightly in order to match at least two of the features of Giza and Cydonia.


This image shows both Giza and Cydonia oriented with North up (the true orientation). The Pyramid of Menkaure (smallest of the three) seems to be misplaced.


Since this orientation doesn't work too well, let's do what your source does. This image shows Cydonia in the correct orientation and Giza inverted (South up) the way your source wants you to think it is. I guess north/south orientation is of no consequence. Once again poor Menkaure gets displaced. It does align with a small feature that was not visible in the earlier images that your source used. That feature appears to be a depression rather than a raised area.