How far have our signals traveled?


Makes me wonder, how far HAVE our earliest radio signals traveled, if they have traveled far enough for a nearby civilization to pick up?

Our nearest neighbor is Alpha Centuri, have they reached our neighbors yet?
edit on 12/13/2013 by HomerinNC because: (no reason given)


Here is a link the describes how far different signals have traveled from Earth.
zidbits


Since we have been pumping signals out for around 110 years so unfortunately (or fortunately depending on your view) our radio signal has made a bubble around us of 110 light years around us, any aliens in this bubble could pick up our signal, but even then the signal can get distorted because of the stuff in space.

posted on Dec, 13 2013 @ 12:25 PM
link
Our radio waves, the only really significant energy output from our planet has been beeming out for say 200 years, 200 light years (radio travels at light speed remember) is just insignificant in scale to the galaxy. Like a tiny dot on a piece of A4.

posted on Dec, 13 2013 @ 12:28 PM
link
I have just been thinking, TV,Radio etc is all going digital so maybe we will "Go Dark" and any Aliens wishing to see the next episode of eastenders will have to come down to watch it.

boymonkey74
I have just been thinking, TV,Radio etc is all going digital so maybe we will "Go Dark" and any Aliens wishing to see the next episode of eastenders will have to come down to watch it.

Whos saying that they havnt already?

Aliens traveling to us to watch eastenders out side our windows would just be the cherry on top this weird universe.

posted on Dec, 13 2013 @ 12:36 PM
link
Here is an graphic showing a representation of our galaxy, with a blue dot representing how far our radio signals have traveled in about 100 years (i.e., not very far at all). 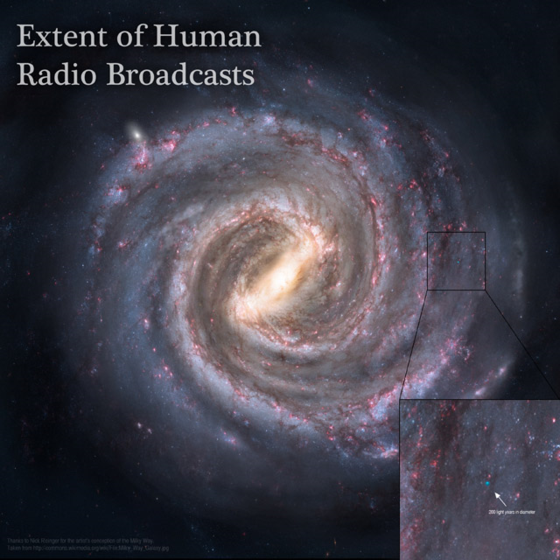 And that's just our galaxy, which itself is a tiny part of the known universe. Our identifiable presence in the universe as a technological civilization is just a tiny (almost imperceptible) speck of almost nothingness compared to the vastness of the universe.

posted on Dec, 13 2013 @ 01:25 PM
link
Here's a 3D visualisation of the Solar System neighbourhood, and the approximate extent of our radio broadcasts. (For reference, Tau Centauri is approximately 131 light years from Earth.) 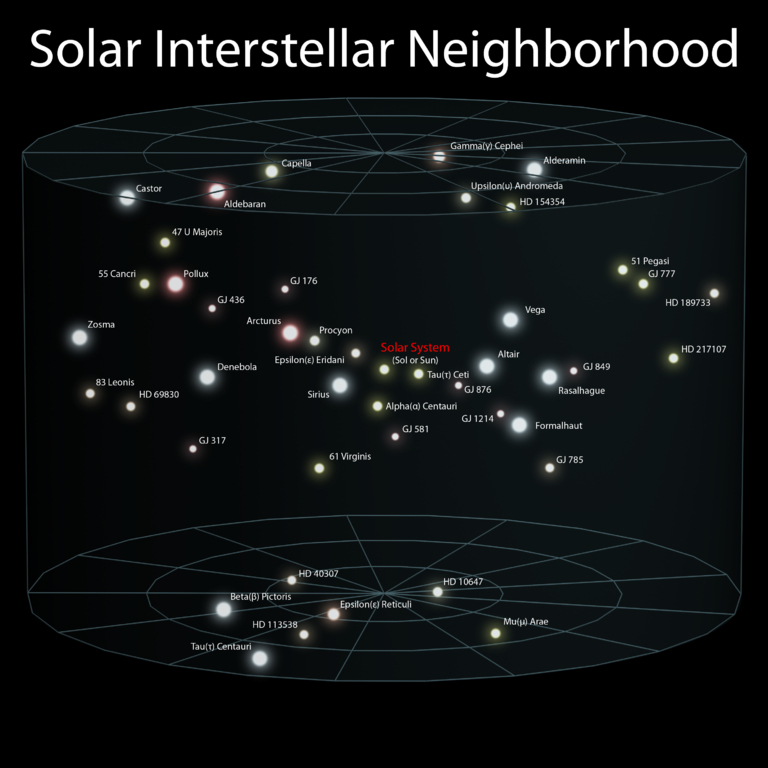 posted on Dec, 13 2013 @ 01:50 PM
link
I personally think that our signals have already traveled the length and width of the universe, and continue to expand along with the universe into the past and future (maybe even helping feed that expansion).

Yeah, you can say that the distance our signals have traveled is limited by the speed of light and the length of time we have been broadcasting. But I think you're forgetting that the space of our reality is mostly empty, like a sponge filled with holes, and that bits of energy and therefore information naturally "worm" their way through the holes and pop into existence in other parts of the universe without having to travel the normal time and distance between. The signals disappear into "nowhere," then appear again "somewhere." Here, there, past, present, future... all the same.

So the noise of the thin layer between real spacetime and virtual spacetime is filled with incursions and fluctuations that a more advanced civilization (including our own in the future) might possibly be able to detect and read. We shall see. 
Whats scary, which is denoted in the movie, is the issue of Nazi Germany / Adolf Hitler's message reaching other civilizations first.

Come to think of it it might be why we have not had contact yet - If ET got the signal, its not out of line to assume they would consider us a problem and possible threat to their own civilization (in general - you get the idea).

There is a thread somewhere here on ATs from 6-12 months ago that showed a graphic of just how far our signals have traveled. Based on the photo / info, the coverage area looks like a pin prick on the sun.


As others have pointed out we have been producing electrical noise in growing amounts since at least the 1860's and actual radio emissions have been produces since about the start of the twentieth century but these were comparatively weak and very little would have gotten beyond the ionosphere though what did being non directional would be weakened by range and dissipate to undetectable levels after a few light years at most, now we have produced very high powered signals since about the 1920s with radio communications and they may have travelled over 90 light years so given that proxima century is at 4.25 light years and is the closest star (a red dwarf) so our sun add another 85 light years to that.
Though there are stars with planetary systems well within this range it would seem highly unlikely given how long it took us to develop our technology that even if any have sentient life that they are aware of us, but given time it is possible one day a alien intelligence may detect our signals and if capable maybe even visit the earth and if they do by that time will we even still exist.

What about the famous wow signal from the 1970s or another which has been shall we say cleaned away probably because of the brookings report and the PAID to do this secret agency whom try to minimise any evidence of alien activity or indeed alien existence whom were originally established by the international advisory comity based on the recommendation in the brookings report.
This other signal which some older ATS members may remember having heard or read about (Is'nt the net beautiful - as we move away from print the censors job is so much easier) it was received by a large radio telescope and at first was regarded as static but one research took the printout that was destined for the waste bin and sat there with his pen absent mindedly joining the closest dots together with pen lines (binary 1's on the binary print out), to his surprise an image began to resolve itself of a stick man with a triangular head and a radio telescope like shape as well as some other forms, I have tried to find this but can not and the closest though nothing really like it is the Arecebo signal we sent from here.

Maybe another ATSer will remember what I am on about and provide a link.

wildespace
Here's a 3D visualisation of the Solar System neighbourhood, and the approximate extent of our radio broadcasts. (For reference, Tau Centauri is approximately 131 light years from Earth.)

That graphic leaves a LOT of stars out. And the "bright and famous" stars are the LEAST likely to host civilizations for a whole number of reasons.

You should be looking for all the less bright and not so famous stars, especially the plethora of G, K, and M stars, mostly left out of that graphic.

Note, the sizes of the stars are not to scale. The yellow highlighted stars are stars in the same class as our Sun.

We're watched on the Alien Equivalent of Galactic Television as a planetary Reality Show.
Thus, via proxy, our signals are all over the galaxy and may even be licensed for redistribution to other Galaxies.

UFOs are the equivalent to those Studio Tours you can go on in Hollywood.

On a more serious note, per everyone else saying so, we have a 'radio bubble' some 200 light years across with Earth at the center. There's certainly transmission decay and corruption, but, eh, though it's very unlikely anyone is listening, it'd be interesting if there was.

Back to humor; Imagine a civilization just developing their own radio transmitters and receivers right about the time our signals first get to them, and through that, we corrupt an entire 'primitive' civilization without ever even knowing we've done so.
We'd have aliens believing in Superman, and getting into debates about our access to 2D Space where Mickey Mouse lives.

It's kind of fun to think of the shenanigans and results this kind of involuntary interference with another 'primitive' civilization could have.

If we had a normal TV transmitter located around 550 AU or 550 times the distance the Earth is from the Sun, it would be powerful enough to broadcast a fairly clear signal to the other side of the galaxy due to the Sun's gravitational lens.

Likewise, if we had a radio observatory the size of Jodrell Bank or Green Bank, we'd likely be able to detect a 5 watt walkie talkie 20 light years away and a normal FM station on the other side of the galaxy.

Reference: The Sun as a Gravitational Lens - A Target for Space Missions Reaching 550 AU to 1000 AU - Claudio Maccone

posted on Dec, 14 2013 @ 04:16 AM
link
the theoretical range of RF propogation and its actual rage , at which a coherent signal can be received = light years apart [ pun intended ]