Just a quick thread to see if anybody knows anymore on what this astronaut has seen and taken a picture of in space. 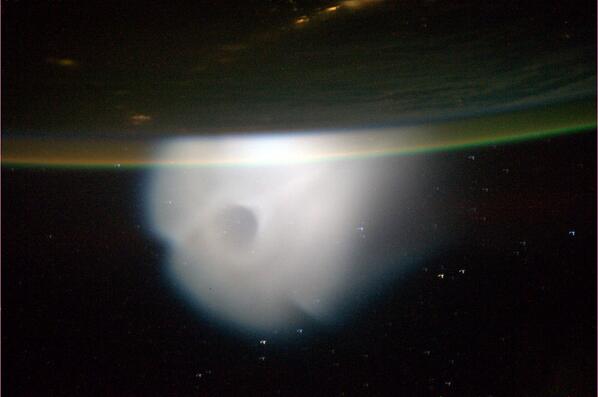 So Astronaut Mike Hopkins saw something launch into space on October 10, 2013.

Sources online say that the strange UFO cloud might have been a Russian rocket.

But Hopkins is not entirely convinced that it would have been a Russian rocket. Hopkins: "Not sure what it was but the cloud it left behind was pretty amazing.

I don't know what could of made it , and I know nothing about rockets either, but would a nation be testing rockets that close to the ISS?


Its a Russian rocket launch. There's another thread about it on here somewhere.

skyblueworld
I don't know what could of made it ,

posted on Oct, 15 2013 @ 06:31 AM
link
Thats right i saw the other thread somewhere. Its supposed to be a Russian rocket shot at ISON lol but everyone figured it would take forever to get there. Btw does anyone have any idea what the rocket was for in the first place.


Ty you the post wasnt there while i was typing that explains it lol.


It looks similar to the space "floaters" that have been previously filmed from the ISS. (Can be found on YouTube)

skyblueworld
Cheers guys, I guess the mods can move this into an ongoing thread. Shooting rockets near the ISS

After seeing [and THOROUGHLY enjoying] 'Gravity' last week, that was my knee-jerk concern, too.

But it turns out they were never closer than about 3000 km and could not have collided. This time.


I'm very eagerly awaiting for this film to arrive in the UK cinemas, it looks like my dream movie.