posted on Oct, 14 2013 @ 05:57 AM
link
Like my signature say: The Things Up There Are Worst Than We Can Imagine... Who fired this "Ballistic Missile"? Or, what is that? This wake is very strange, because there wasn't launch scheduled from NASA (because of the shutdown of the government) or from any other American society of commercial space flight.
Russia and Europe not had no launch scheduled in that moment. 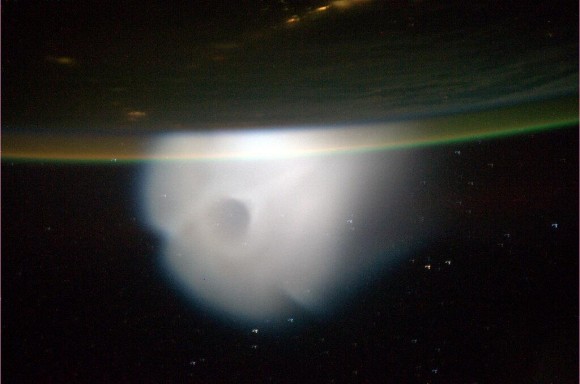 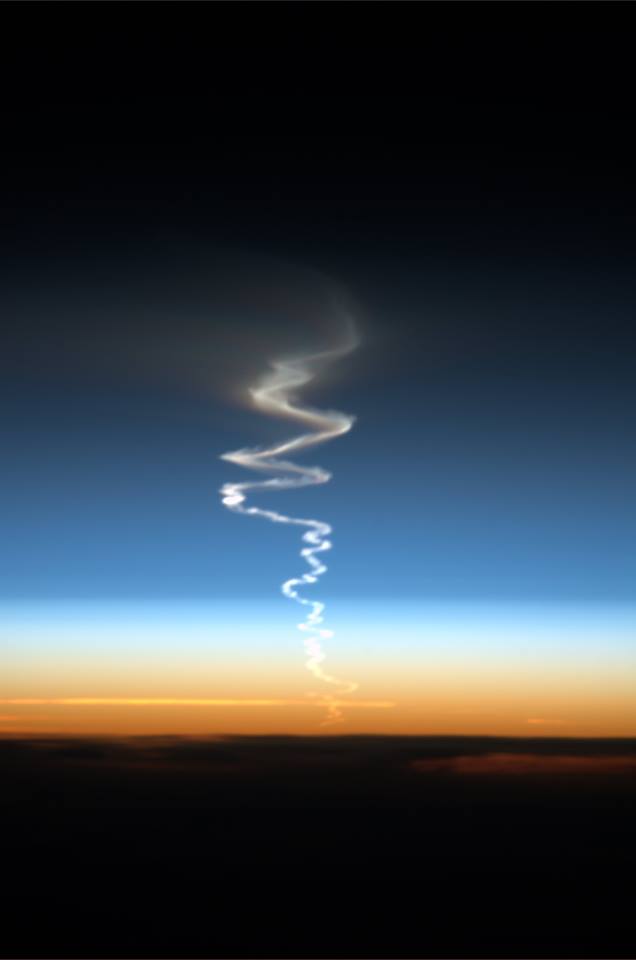 Italian astronaut Luca Parmitano, who experienced a sort of Space Odyssey when his helmet filled with fluid during a recent spacewalk, has taken another interesting image from the International Space Station.[...] he has shot a contrail (shaped by high-altitude winds) of what he believes is a missile launch.


Saw something launch into space today. Not sure what it was but the cloud it left behind was pretty amazing

The Strategic Rocket Forces carried out a successful test launch of a Topol/SS-25 missile on October 10, 2013. The missile was launched at 17:39 MSK (13:39 UTC) from Kapustin Yar to the Sary Shagan test site in Kazakhstan. According to a representative of the Rocket Forces, the test was used to confirm characteristics of the Topol missile, to test the systems of the Sary Shagan test site, and "to test new combat payload for intercontinental ballistic missiles."


It was a Russian Topol-M missile.

No offence Arken, but it took me less than a minute to find the above source with a simple google search......why didn't you do that before posting?
edit on 14/10/2013 by Argyll because: (no reason given)


Thanks For this info.

But this is quite strange...

[UPDATE: Matthew Greene on Twitter told me the Topol missile uses solid fuel as propellent (he is correct), so it cannot have been a dump that the astronauts saw. I'm not sure now what caused the cloud, but it's clearly associated with the missile itself. I'll continue to investigate.]


Could it be a deliberate counter-measure they saw? Like flak deployed from an aircraft to break pursuit of weapons? Maybe that deploys some big cloud of something to effectively blind whatever is left on the other side of it? (I may be missing something big...but that's my best guess on what we're looking at?)

posted on Oct, 14 2013 @ 11:07 AM
link
Am I the only one who finds the fact that we are no longer able to view the live feed from the ISS (previously accessed through USTREAM) more than a little suspicious?? NASA quote a loss in funding as the cause, but I find this unbelievable considering the amount of money that must be available to them! Just wondered what other people on here thought...
edit on 14-10-2013 by kuraijanai2013 because: Spelling mistakes.

(post by wmd_2008 removed for a manners violation)
Zaphod58


NASA is a government agency. The government is shut down. What money? They currently only have a Mars probe in the works that has anyone working on it, and 98% of their staff is furloughed.

(post by PlanetXisHERE removed for a manners violation)
Zaphod58


I heard there are still a few essential NASA employees still working ...

It was predicted and expected.


Is it ever not at least half BS, Arken?

You are very consistent.

They've always been out there, and they've been causing UFO sightings for half a century.

Cases caused by them infect every 'serious' UFO data base, and infest the books, magazines, and websites.

UFO eager-believers such as Arken have been closed-minded and self-ignorant about them, and will doubtless continue to be.

kuraijanai2013
Am I the only one who finds the fact that we are no longer able to view the live feed from the ISS (previously accessed through USTREAM) more than a little suspicious?? NASA quote a loss in funding as the cause, but I find this unbelievable considering the amount of money that must be available to them! Just wondered what other people on here thought...

I think suspicion and skepticism about official statements ought to be the going-in position on everything.

In this case, I'm asking if the missile test -- and such it was -- was timed for perfect visibility from the ISS so the Russian cosmonauts could make engineering observations of it, and they quietly alerted their American buddies to be at such-and-such window at such-and-such time looking in such-and-such direction with the right cameras and lenses.

Count me on the cynical, skeptical side, in this case.

posted on Oct, 17 2013 @ 11:21 PM
link
Dozens of photos of the apparition were made aboard ISS, I've seen them, and am trying to get them released. It's still a missile, but more interesting than ever. Please be patient.

Every picture tells a story // Posted on October 17, 2013 by raffaella
blogs.esa.int...
An unexpected surprise

One of the several tasks of an astronaut on the ISS is known by the acronym CEO or Crew Earth Observation. A team of researchers on ground studies the orbits of the Station and selects objectives to photograph, indicating the time of their passage, the coordinates, the type of photo you need to provide and as much information as possible to find the target. These range from easily identifiable cities to impact craters that are absolutely indistinguishable from the background – all at roughly 400km distance from us. This task is voluntary, but the challenge of finding the targets is a pleasure. Finding a particularly difficult target gives me a satisfaction that must be similar to a passionate collector purchasing a missing piece to a collection. My crew has a daily routine and Expedition 36 has far exceeded all previous photo targets snapped and sent to Earth.
I am in Cupola again and I am setting-up a camera on a window overlooking the north. The Station is operating under working hours so all the lights are on. My next Crew Earth Observation target is the Aurora Borealis. To avoid reflections from the Station’s lights I build a tent to obscure the area around the camera. I have already entered all required parameters in the camera, including the estimated time of the aurora. With a little luck I should be able to photograph the sequence even without being physically present behind the camera: at that moment I will be engaged in another activity.
Sunset is fast approaching. The gold and orange light that reflects off the solar panels attract my attention and I cannot look away until my eyes focus on an image that is foreign to nature: smoke emerges straight and clear on the horizon, accentuated by the last rays of the Sun. Nature does not like straight lines, and this inconsistency has guided my vision. I am looking at a launch of something, I do not know what and I do not know where, but it is definitely a launch. I do not know what my chances are of seeing the launch of a suborbital object when I did not know the launch details beforehand but instinctively I would say they are very slim: an extraordinary case of being in the right place at the right time!
Karen and Mike are above me in Node3, and I dare to look away for a moment to call them. They both float into the Cupola and we share the little space to observe the object as it follows its path through the upper layers of the atmosphere. Its trail is now at the mercy of the stratospheric winds which distort the shape, transforming it into a series of segments that twist, starting from the ground till it reaches the blackness of the stellar vacuum. I take one of the cameras and hope that the automatic settings will be enough to take good pictures, despite the light from the sunset starting to fade. I stop shooting only when the Sun is completely gone, but I do not stop looking. The object disintegrates before our eyes, and hundreds, probably thousands of kilometres away, we see a cloud of transparent white gas expand growing ghost-like, in all directions until it flattens when it meets the atmosphere. We wonder what we just witnessed, but even Houston ground control fails to explain.
In the evening, we discover that it was the test launch of a Russian intercontinental missile launched from Kazakhstan. All three of us are surprised by the incredible coincidence that allowed us to observe such a rare event. We are not sure what to think. For my part, I am pleased to add another valuable piece to the only true collection I have, the only one that is worth anything: my memories.

Dude, these sighting were in predicted IN ADVANCE, in this thread....


I believe he was suggesting the type of propellant used in the missile would not make a contrail like this. Or something like that lol.