The Skógafoss is one of the biggest waterfalls in the country with a width of 25 metres (82 feet) and a drop of 60 m (200 ft). Due to the amount of spray the waterfall consistently produces, a single or double rainbow is normally visible on sunny days. According to legend, the first Viking settler in the area, Þrasi Þórólfsson, buried a treasure in a cave behind the waterfall. The legend continues that locals found the chest years later, but were only able to grasp the ring on the side of the chest before it disappeared again. The ring was allegedly given to the local church. The old church door ring is now in a museum, though whether it gives any credence to the folklore is debatable.[1]
At the eastern side of the waterfall, a hiking and trekking trail leads up to the pass Fimmvörðuháls between the glaciers Eyjafjallajökull and Mýrdalsjökull. It goes down to Þórsmörk on the other side and continues as the famous Laugavegur to Landmannalaugar.

I have been looking around for more information on this but haven't found much. Anyone know anything about this legend? 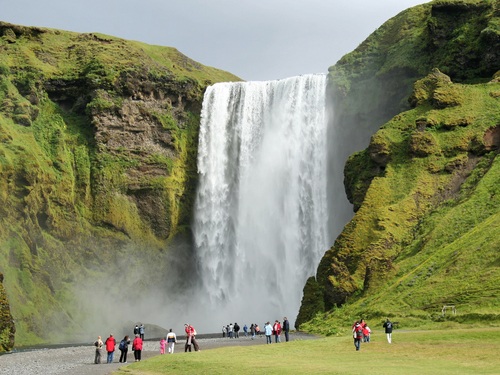 I did find this document on line, I had to use google translate so the wording is a little wonky.

T Rasi lived in the eastern forests, some say the Aspire places, just east of Forest waterfalls, forests are now east-most town in Rangárvellir. Then lived in Lodmund Sólheimum, the next town east Solheim Sand, and they were the neighbors. They Þrasi and Lodmund were both multi cunning.
During that fell between their countries is creeping named, then the Jökulsá Sólheimasandi. On this they helped each other country Landnámabók says, because neither would have it close down. Of these snacks and water was running loose sand grass that Sólheimasandur called and stand there still many channels the river has changed in it and that time.

Finally they saw neighbors land desolate then this happened. Such circumstances, the east side of river walks ridge in Solheim heath of the mountain river and named it Loðmundarsæti; than the west side of the river where the meet the underside of the Forest mountain called Thrastarbogi throat. Falls as the river canyons between the neck until the sand.

At these stations said that they Þrasi and Lodmund have the ocean waters while they grieved the end, both the settlement buzz that they place where the canyon of the river was thereafter cast of sand which would shorten the sea, and it became.

But it seems that normally the reverse flow in this case and the other just below, upstream, when the falls from above, downstream, and tells the story of the ónáttúra river is descended from their conflict Þrasa and Loðmundar.

From what has been said yet about Þrasa he came his chest full of gold and gems by many considered as the days have seen on another casket headboard out from under the waterfall.

Admittedly they may still ultimately have delivered on this and it is as follows:


"Despite Kista riches
Forests under the waterfall,
everyone who goes there first
Nogah find riches. "
It is said that some time had been three men in the woods and they have been the sons of Amundi Þormóðssonar people Legislature (1639-1671 or more). They were trying to get ahead Thrastarbogi Coffin waterfall. Was that then look back to town and thought he would stand in the bright flame and turned to the world: but there was actually no fords on trips.

Later they went back and tried to get the coffin and made no missýningar deceived. They brought so far that they could hook the ring was in a coffin ends the balance that was observed. But when they were trying to attract the chest twisted ring ends of the balance and so they had no more of the coffin. It is said that the ring is now the church door in the forest.

I'll see if I can find anything more...

posted on Jan, 31 2013 @ 06:36 PM
link
This translation caught my eye because of the name Amundi, along with the mention of the one ring being found in the waterfall.

It is said that some time had been three men in the woods and they have been the sons of Amundi Þormóðssonar people Legislature.

I’ve heard that word before in the Lord of the Rings – Return of the King. The word sounds similar to the word Amon Din in LOR. It’s one of the seven emergency light beacons of Gondor, when it's in need.

Amon Dîn was the first and possibly the oldest of the seven Warning beacons of Gondor and is located between the Drúadan Forest and the Grey Wood. It was originally used as a fortified position of the city of Minas Tirith keeping watch over north Ithilien and Dagorlad. At the siege of Gondor, Amon Dîn was the second beacon to be lit.

J.R.R. Tolkien pulled from many celtic and Germanic legends to create his work of fantasy.


I'm from Iceland and I hadn't even heard this legend before. Not as well versed in our ancient literatures and saga as I thought

I've been to Skógafoss and it's beyond beautiful. Who knows, maybe one will find the treasure if one decides to really look for it

Really nice to see a thread on something so close to myself and tbh a subject I hadn't even heard of. Unless I was taught this at school and I have just forgotten about it.

...Due to the amount of spray the waterfall consistently produces, a single or double rainbow is normally visible...


...buried a treasure in a cave behind the waterfall....


So...There could be a pot o' gold at the end of this rainbow? Interesting....

posted on Feb, 1 2013 @ 10:31 PM
link
Has anyone tried again, going behind the waterfall and checking?
Just imagine its something that could be found out pretty easily. Though having it remain a legend unproven is probably more appealing in some way.


Thank you so much, that was exactly what i was looking for, sort of

While the translation is obviously wonky, some of what im getting from it feels a bit like a fairy tale. Which seems the most likely to me as Iceland is famous for it's belief in elves and faeries. Keep in mind, these are the people that will halt major construction projects so as to not disturb the 'little folk'

Put the treasure together with the waterfall and you can come up with some interesting theories that i won't go into...mostly because i wanted to show you this one instead, which i found very fascinating since we already connected Lords of the Rings to this in some odd fashion.

(Oh, and for the local. If you wanna find the treasure, i would suggest trying at one of the solstices and singing some ancient folk songs as faeries and spirits of the water element are fond of music)


"The imaginary elves and hidden people are another fascinating projection of the Icelandic psyche upon nature. These creatures live in the underworld right under the beneath of the ground in rocks and hills. Icelandic folklore contains two accounts of the origin of elves. One claims that they are the unwashed children of Eve that she wanted to hide from God, thus, symbolically representing aspects of the human personality that the self regards as unwanted. As an omniscient God knows everything, however, he decided that whatever humans try to hide from him, he would hide from them. The other account of the origin of elves holds that these creatures were created at the time when God created a woman for the first man, Adam. As the woman turned out to be exceedingly difficult to manage (for both Adam and God), God changed his plan by creating a man for her, equal to her untamable nature, and named him Alfur. She was named Alvör, and all elves and trolls are descended from them. Both stories point towards a male tendency to blame women for their provocation, as well as the repression of unaccepted tendencies. Many things indicate that the hidden people originate in our unconscious: They resemble us in many ways, though they are more spirit-like and invisible, and to see the elves, must to either be given permission by them, or have a special ability. They can have supra-human capacities; and they can be both better and worse than humans. To provoke their anger means trouble but to help them in times of crisis means blessings as a result they are powerful, respected and feared. The hidden people have various human attributes, and even though they live longer than we do, they are born and they die just as we do. They eat and drink, play instruments, have lights in their houses, go fishing, move residences, and keep animals, though they are more productive than those of humans. Traditional belief holds that there are both good elves and bad elves, light elves and dark. Light elves live closer to the gods and are Christians. They worship in churches that can be identified in formation of rocks or in domelike caves. The dark elves live in the ground. The hidden people live not only in hills and stones, but in the ocean and lakes as well, and even in the air. The elves do not live in burnt lava for it is the dwelling of evil spirits and death. It is possible to learn magic (how to influence the unconscious of others with psychological powers) from the hidden people. They can be very seductive, though if you don’t do what they want they turn against you — and if you do accept what they offer (or identify with the psychic contents that they represent) you run the risk of becoming insane." [52]