Why I feel inclined to vote for Gary Johnson

posted on Oct, 13 2012 @ 03:38 AM
link
Hello ATS, the most beautiful conspiracy site there is(I really don't know of any other conspiracy website),

Truth be told, I come on ATS for the amazing news articles from around the world and the variety of different opinions and viewpoints. There are some really interesting threads on here. One of them that I read recently was about why we should vote for Romney, else we are throwing our vote away; this is in somewhat response to that.

When I listen to Romney speak, I honestly get the feeling that he is a decent man; his family seem to have nothing but good things to say about him and they are the ones that know him best. I do not agree with everything that he has said but I acknowledge that he is a good bussiness man and we can use one right now. But, the thing that gets me(otherwise I'd probably vote for him) is his stance on war. He supports it and I feel that he wouldn't bring us closer to an end of it like many of us want. Now, I'm not completely a pacifist, if we have a good reason to defend our country, freedom and rights then it is sometimes neccesarry to do so.

Like I was getting at, I believe that Romney is a sincere man, he wants to help the country; a God fearing man I'd like to think that he would turn to the Lord and his conscious when making a decision to choose the right and what would be best for us. I just can't understand his position on the middle east. Do any of us really truly know what is going on over there and the politics that have led up to these wars? We have been told a lot of things but we don't know for absolutley sure; we also don't know the damages that are being done to the innocents over there because of our being there. Are we helping? Maybe in some ways but is it absolutley worth it? Are we doing more harm than good? Idk and I feel that it would be wrong to support a war that I can't understand, that some soldiers don't even understand.

So, my hats off to Mitt and I congratulate him for his succuss but I think this time my vote is going to have to go to Gary Johnson. A man who has a good record, who supports Liberty and bringing down the two party system, a man for the people; someone like Ron Paul who has had their voices snuffed, yet remains in the fight and going strong.

I believe that Gary Johnson said that if even 5% vote for him then it would be a huge blow to the two party system.I believe it is more important to do what you feel and think is right over choosing to vote for a particular person because you feel that you are backed into a corner and have to. You don't. And Maybe I am wrong about all of this but I am willing to learn more and I hope that we all can give this some deep thought. I am in no way encouraging people to vote against or for Mitt Romney or Gary Johnson, I am just stating my reasons for doing what I am doing and inviting all to choose the right in this great time of our country.

Nothing is going to change so long as private, FOREIGN interest control things.

Gary, Barry, Mitt, Doug, Bart, Chuck, Fletch... it doesn't matter who they are or what they say. None of them have the power to change a damn thing, and the evidence to support that is written in stone with the track record of "presidents" past. Nothing ever really changes.

It's not pessimism, just fact.


Obama thanks you for your vote!

Ross Perot got 18% of the vote. The Reform Party isn't a major political threat. Gary Johnson's 5% shake-up idea isn't historically accurate. Do you really want to vote for Obama by casting a ballot for a guy whose strategy isn't grounded in reality?


Fact is, I'm not voting for Obama so I don't understand why Obama would thank me for voting for Gary Johnson? Do you advocate me to throw out my morals because I only can choose between two people and neither one fits my standards?

Also can you supply me with proof of what you say about it not being accurate? If more and more people in the coming years continue to support freedom and are against a two party system, then the only thing I can see happening with that is it will encourage others to support it instead of supporting the two party system because they feel they have to.
edit on 13-10-2012 by OKThunder because: (no reason given)


Originally posted by HIWATT
Voting is a sham.

Nothing is going to change so long as private, FOREIGN interest control things.

Gary, Barry, Mitt, Doug, Bart, Chuck, Fletch... it doesn't matter who they are or what they say. None of them have the power to change a damn thing, and the evidence to support that is written in stone with the track record of "presidents" past. Nothing ever really changes.

It's not pessimism, just fact.

Seeing as how I don't have absolute proof of this and it isn't to difficult for me to vote I will continue to do so. As someone on the forum has said earlier, apathy is the surest way to give control to those who want to control us.
edit on 13-10-2012 by OKThunder because: (no reason given)


Obama thanks you for your vote!

Ross Perot got 18% of the vote. The Reform Party isn't a major political threat. Gary Johnson's 5% shake-up idea isn't historically accurate. Do you really want to vote for Obama by casting a ballot for a guy whose strategy isn't grounded in reality?


No, he wants to vote for Gary Johnson. Didn't you read the OP? It was pretty clear that he is voting for someone and not against someone. Which is how voting was designed.

Good on you, OP! Liberty minded people will be voting for Gary Johnson this November!

posted on Oct, 13 2012 @ 08:28 AM
link
I voted for Gary Johnson via absentee about two weeks ago.
I did so for these reasons ...
1 - I like where he stands on issues more than Obama or Romney.
2 - I just couldn't bring myself to vote for Obama or Romney. Both are sucky I think.
3 - I wanted a clear conscience .. and I get that with a Gary Johnson Vote. 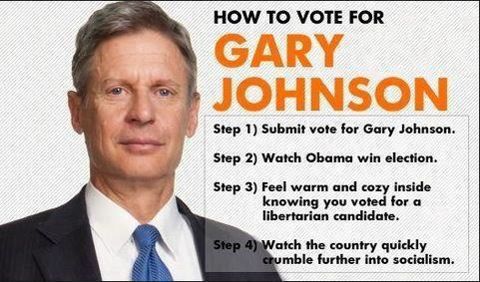 
The two-party system is has been around since the election of 1796 (the first two-presidential elections Washington ran unopposed). I guess those Founding Fathers were dumbasses and hated liberty, huh?

Actually, it's this thing called Duverger's Law that says because we run by a plurality and a winner take-all system there really is only room for two parties.

More to the point, Perot ran in 1992 and 1996, gaining 18% and 8% of the vote, respectively (both numbers larger than 5%). Did you see a huge shift in the political landscape then? No. Where's the Reform Party today?

If you want to go back a little further, Teddy Roosevelt, who was President created and ran on the Progressive Party ticket after a split with Taft. Roosevelt lost.

The reality is we have a two party system. Not voting for Romney is the same as voting for Obama. The choice really is one or the other.

Be sad about that fact, but these are the facts.

posted on Oct, 13 2012 @ 07:16 PM
link
I would rather vote for Jesse Ventura, but he never seems to run. But he does support Gary Johnson, since Ron Paul was ignored into non-existence.

posted on Oct, 17 2012 @ 10:06 PM
link
Johnson is the first politician I have ever sent money to, and I'm very underemployed. He got my interest and my support because he seems an honest man who will actually do (if given the chance) what he says he will do. The way he was marginalized by the Republican party while total cretins like Cain and Bachmann were invited to debates told me everything I needed to know about the Repubs. Yes, it's a done deal who will win (and one side or the other is going to be suicidal come November) but I will vote for someone I can respect.

Mitt Romney is a smarmy snake in the grass who considers himself a 'businessman' but whose main talent was getting tons of money from investors that included Miami drug lords, buying up businesses in difficulty, skimming money off from them, and maybe somewhere in there telling them they had to cut staff to stay in business. Oh, and he made money for his investors. This is not a business, it's a casino. For the OP, what did Jesus say about rich men? A true businessman makes widgets or provides a service, shows up every morning before anyone else, leaves at night after everyone else, and worries about everything; the bottom line, his employees and his family. He's hard working and may never make much money, but will have the respect of people who deal with him. Romney left MA with a 30% approval rating and the people who worked with him said his door was never open and he didn't seem to want the job after he got it. After two years as governor, he started running for President. It's all a stepping-stone for him, never a real job. Add in the fact that he seems to have been an out of control bully in high school (plenty old enough to know better as a senior) and was reported to have enjoyed impersonating a police officer in his college years, (a felony, for godssakes!) and something else you never hear about, was in a fatal car accident while in France and in a coma for several days... meaning possible neurological damage. No, sorry, but there's something very, very wrong with Mr. Romney. I wouldn't trust him as dogcatcher, much less with the launch codes. The man actually thinks he's going to tell China how to behave. Really? China owns us lock, stock and barrel and they are 1/3 of the global population....

Obama? He said he would do things he didn't do, whether blocked by the idiots in Congress or not, and he signed in legislation that negates the Constitution. End of discussion. He's as much a war criminal as Dubya was, just in more polished packaging.

I'm going to vote for someone I would feel comfortable inviting into my home and letting my daughter date. Romney-bot and Obama aren't it. I'm tired of criminals in the Oval Office.

My vote is for Johnson. If he doesn't win? Doesn't change the fact that I voted for my candidate, not for someone else's.

Both the major parties lost me several years ago... Once upon a time I was what could safely be called a conservative Democrat. Think Sam Nunn/Henry Jackson and you've just about got it. But the Democratic party left me long ago... I voted for Reagan twice, and Bush the First...then the GOP left me, too... So, here I am, where I was left, and now I'm still the same as I ever was, and Libertarian fits me best.

So, Gary Johnson for the win. Even if he doesn't? I voted my conscience, and that's all I can ever do, and all I ever will do.