Watch the whole vid and see if he blinks. He's got to be an android of some sort or else his eyeballs are as dry as the saharan desert.


Haha, I almost thought you were seriously thinking that. Whew.

posted on Aug, 8 2012 @ 09:16 PM
link
He has evidently learned a little trick that some kids use--so I learned from a daughter th used to do it to me. You can out stare somebody and not blink by every so slightly lowering your eyelids just a fraction. That gets the juices flowing just enough to avoid a full blink.

Blinking is a sign of weakness so some people think.

posted on Aug, 8 2012 @ 09:17 PM
link
Hey now, if you look at him long enough....He almost looks like a relative of that Shape shifter from Deep Space 9. Remember the security chief? Oh well... It does look a little flat... His eyes even seem to make contact around :58.


Of course, I hope we're not serious any more than the poster above me...lol... but it sure does raise one thing. He doesn't look old or crooked enough to have been elected. A page maybe? It must be hell working in a place where just sitting down for a moment can get you ...well, however many minutes of fame the windbag has to go on about something. Talk about life in a fish bowl.


You mean Odo? Kinda looks like him too, indeed.


I'm a bit older so I automatically thought of Bishop from Alien. Hmmm there is a resemblence too ! 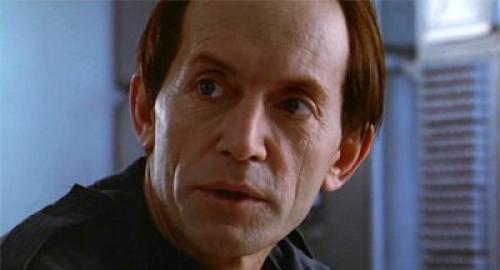 posted on Aug, 8 2012 @ 09:24 PM
link
dont look into his eyes its a trick, they want you to be hypnotized by his unblinking remote brainwashing.

but yea, that guy keeps his eyes open for as much of the video as i was willing to watch. i made it about half way and got tired of it. the speech is way more interesting though.

Also, HOLY CRAP I thought the guy not blinking was a joke. I thought he was a picture behind Sen. Sanders. But then he randomly starts moving around about halfway through the video lol... Weird guy.
edit on 8/8/2012 by OrphenFire because: (no reason given)

posted on Aug, 8 2012 @ 10:20 PM
link
If you had to listen to mind-numbingly vacuous political rhetoric day in and day out, you'd learn to go into a mindless trance too.

Did anyone else laugh their butt off while watching it?

I could not keep a straight face.

There were even moments I thought it was a painting and any perceived movement was just my imagination. But nope he is real.

Originally posted by OrphenFire
We need to vote for guys like this Bernie Sanders. How have I never heard this speech?

Also, HOLY CRAP I thought the guy not blinking was a joke. I thought he was a picture behind Sen. Sanders. But then he randomly starts moving around about halfway through the video lol... Weird guy.
edit on 8/8/2012 by OrphenFire because: (no reason given)

I thought it was a joke while watching because he looked like a picture, but then he moved...........

Someone left the TV on a few days ago, the local news was on, followed by a pharma commercial. The commercial was very high-res, really good quality. The lighting was excellent. The video consisted of just a doctor facing the camera, from the neck up, talking about who knows what. Anyway.... his eyes. His eyes were completely, and totally black. You could not differentiate between the pupil and the iris. It was just black. The sclera was still white.. but the rest of his eye... just black. I mean no line bordering the iris and the pupil. No difference in contrast whatsoever. His pupils didn't look dilated.. it just looked like he had a giant pupil in the middle of his eye. He too, didn't blink.. and his lids were wide open, exposing the iris completely.

I'm told it isn't possible for someone to have "black eyes", and that it's "not possible" for someone's eyes to change color, barring lighting or reflection phenomena. Yet.. it's clearly possible. You see it with people who are very mentally ill, or the truly deranged. Their eyes glass over and turn almost completely black.

Anyone else ever notice this "black eyes" thing, especially in people that should be considered "normal"? Like news anchors, TV commercials, etc.
edit on 8-8-2012 by SyphonX because: (no reason given)

He just screams out to me that he's a predator. Maybe a psycho who doesn't need the dopamine most people do

Originally posted by unityemissions
I'm not sure what to make of this. Even the weird jaw movements ane the way he moves is beyond creepy.

He just screams out to me that he's a predator. Maybe a psycho who doesn't need the dopamine most people do

The only time he looks normal is right at the end when the speech is finishing.