WASHINGTON (Reuters) - U.S. law enforcement and counterterrorism officials are trying to figure out the significance of recent occurrences on websites believed to have close links to al Qaeda, including a graphic some fear could be an attack threat directed at New York City.

The graphic contained a picture of the Manhattan skyline superimposed with a Hollywood-style caption that says: "ALQAEDA - coming soon again in New York."

posted on Apr, 2 2012 @ 07:08 PM
link
I truly hope this is just a belated April Fools prank. Although it seems U.S. authorities are not laughing and rightly so. This is the image that was posted (presumably). 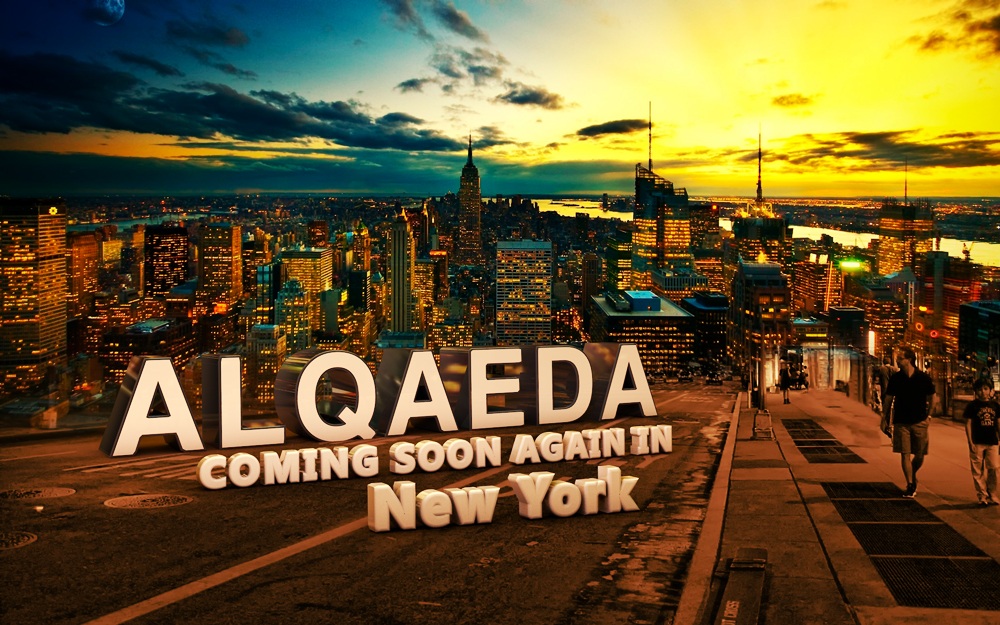 Despite your take on 9/11, this event lays heavy in the hearts of many not just Americans. I wanted to present it to ATS to not only develop a civil discussion but to as well let other members dissect this picture for anything that hasn't as of yet been noticed, if anything at all other than the blunt message it contains.

www.chicagotribune.com
(visit the link for the full news article)
edit on 4/2/2012 by UberL33t because: (no reason given)

And the emphasis on the road with sewer grates and the sidewalks....should we be looking for something underground?

I don't know if it actually means anything (the poster)...it might just be a mind game....I don't like it though.

posted on Apr, 2 2012 @ 07:21 PM
link
Did this pic come from the msm?
If so I find it odd that ALL pics and videos from 911 were confiscated AFTER the crime, whereas here we have a supposed future crime and the evidence is posted mainstreem.

Seriously out of all of the bunk and bogus crap on the internet, why scare america again, with useless information? I say uselees because there is really no information at all.

Just my take on it.


It looks really well made, not something I would liken to "Al Queda" per se. They prefer the element of surprise as it is, that is, unless they've become that brazen now. The FBI states in the article that "there is no specific or credible threat to New York" so I personally am not moved to fear by this. I am more moved by the lack of cooth involved.

posted on Apr, 2 2012 @ 07:29 PM
link
Some subscribers to Reinhardt's www.enterprisecorruption.wordpress.com are of the opinion the Chicago's Aro building will be the next false flag target as it has some of the financial/insurance/record-keeping issues that the NY targets had. In short, some people would benefit greatly if it went down. The Obamanuts could even spin it as domestic terrorism against the administration since Obama claims the city as his own.


This is where I originally saw the headline:

So I googled and found the two sources posted in the OP corroborating the posted picture.

Presumption led me to believe this was the actual picture from the forum, speed of the net and all, this may or may not be an artists rendition, but the story was just posted so it is too early to tell. Neither of the two articles have a link to the picture.

ETA:
This is UK Reuters description:

The graphic is a stylized photograph of the Manhattan skyline superimposed with a Hollywood-style caption that says: "ALQAEDA - coming soon again in New York."

posted on Apr, 2 2012 @ 07:43 PM
link
Well, given that alot if not most people on here believe that 9/11 was not what; shall we say: it was presented to be. Then take into account that the last two people who were truely involved in al-queda. One was on a airplane and managed to set his own private parts on fire. The other parked a large suv in Time Square loaded with gas, fireworks,and propane. All he managed was smoke.

You have to think, we have not had a near "terrorist" miss in awhile and you have to stir it up from time to time if your going to keep the sheeple scared and obedient. I have no doubt that there are Muslims that would love to kill us. Lord knows we have poked them long enough, but if your looking for terrorist I would suggest looking toward Washington.


Anyone who claims that there was an element of surprise to 9/11 has missed a trick.

An Afghan warlord who fought against the Taliban warned the EU Parliament in early 2011 that they were planning a big attack on New York. If he knew, you can guarantee other's did.. Oddly enough, he was killed by an assassin on the 10th September, 2011....


I know you meant 2001 in your post above I too am still writing 2011 for 2012 this late in the year. Usually takes me until about July to have fully down lol.

I more meant the element of surprise was on the citizens of NY. Regardless, of who knew, or knows of any future attacks, the citizens are generally the one's taken by surprise with these attacks, obviously of course, because if citizens knew, then what would be the point of the attack?

posted on Apr, 2 2012 @ 08:06 PM
link
I wonder if there are any codes in
the image. Its actually a creepy
image, not very New York for some
odd reason. I think the image was
well planned out but maybe I am
reading too much into it.


I am curious as well, perhaps there is some symbolisms within this picture. Though any symbolism suggested would be merely speculative at best. Unless it's completely blatant of course. It is a curious image indeed.

"Chasing our tail? US investigates US officials who are preparing for a false flag attack. (graphic made in China)"

If I was a "terrorist" and wanted to attack something, and took "11 years" to plan it.... How far in advance would I start marketing the attack...?

It is a horrible thought to consider, but since it's been reported on, I wonder why NYC again? And why announce it ahead of time? What or who would be the target? The one I'm guessing most Americans would not cry about would be the Fed. Its renewal contract is due next year and many believe it has outlived its usefulness. But would that be playing into the hands of American politicians too much? Perhaps an inside job then or one made to look like one?

I have not finished watching the videos posted in an ATS thread yesterday
here
about Michael Shrimpton QC in which he says German intel father al-Quaida. I believe he said they control the IMF and the only thing I can think of as a trigger was that their boy Dominic Strauss-Kahn was not only seriously humiliated in NYC, but effectively and immediately dethroned as head of the IMF and as well, dethroned as the next president-in-waiting of France. Now I don't pretend to know if Shrimpton is full of bs or not, but supposing he is not, then someone above Strauss-Kahn must be very seriously pi**ed off. This then would present a revenge scenario, and I have no idea who the target-s would be.

Forgive my speculating theory, but this is ATS. I do hope that this turns out to be nothing at all though, because I don't wish suffering on anyone.

Interesting, while I agree and don't think they'd announce an attack. Take a look at it from this perspective. The picture itself screams "America" from the grab your attention Hollywoodesque font style, to the out and out previewesque nature of the message. "In a world..."

It airs on the side of complete confidence on the side of Al Queda, it could be argued that it was fashioned more or less as an insult to the American way. Hollywood is as American as Apple Pie, more so these days. Just an observation that I make anyhow.

No matter who devised how 9/11 occurred, one thing is assured, people were affected by it one way shape or form.
edit on 4/2/2012 by UberL33t because: (no reason given)

posted on Apr, 2 2012 @ 09:25 PM
link
Well nice graphics work. Gets the job done for a terrorist to put fear out there. Really pretty stupid for them to do anything now I`d think. Why give us more reason to take them all out?

And why do they only pull off big things here like 911 supposedly. Why not do like they do to their own neighborhoods and blow places up?
I could think of a million ways to make a country live in fear while causing damage. So with that said I`m really starting to think that something is wrong with the 911 being caused by terrorist so much idea.

Can`t the Terrorist see our own Government is trashing this once great country all on it`s own anyhow?