originally posted by: DAZ21
Well it's been a week since it escaped from China and we can assume the incubation period for anyone possibly infected is over and would be showing by now, so I'm going to say the numbers coming from China sound about right and this isn't as bad as what they're making it out to be.

Looks like this isn't the one to end it all after all.

Have u paid attention at all??

True but we, or myself anyway can not speak Chinese, nor preform a search in their language. I did find a bus driver though from 2015 who spewed an equally large amount of blood.

Also the video has not been removed, it is still circulating on twitter, someone just decided to film it playing on a phone to make it look worse.

True but we, or myself anyway can not speak Chinese, nor preform a search in their language. I did find a bus driver though from 2015 who spewed an equally large amount of blood.

Good call about the chinese language, didn't think of that.
I think I have found something:


Supposedly police quarantining person/s inside their home, wow! what if they need help and food?

I think deceased on the floor in hospital...(haven`t seen this one before)

posted on Jan, 29 2020 @ 04:39 AM
link
New vaccine under development;
“Need at least a year of animal testing before clinical trial can be started” claims HKU’s Professor of Infectious Diseases, Yuan Guoyong.


Department of Microbiology at the University of Hong Kong has initially developed a Coronavirus vaccine.[/unquote]

Good find, does appear to be the same or similar setting, so from almost a year ago, and he had advanced liver cancer.

The video on twitter I was referring to is the same, posted 1 hour earlier and even the poster indicated there was a 98% chance it wasn't related to coronavirus, just stirring up #.

originally posted by: sapien82
Read news that they have cured 6 people

posted on Jan, 29 2020 @ 05:11 AM
link
Man supposedly angry about not getting medication coughs toward 2 medical staff


Another laying in the street with shopping


More in the street
(may have see this one before?)

Sad loved one for deceased


Horrible situation for these people going through this.

posted on Jan, 29 2020 @ 05:38 AM
link
No one could be wearing a mask because this could be one of the first group of infected. Before the hysteria took place. Many many coulds. a reply to: RobinKuiper

That youtube account has some interesting videos, especially the isolation ones (possibly forced). But I've seen a number of the videos posted before under longer titles, and as I can not translate them, I am unsure how accurate they are.

For example that coughing one was previously posted as a bank not a hospital/pharmacy.

Phew!!! coronavirus doesn't cause people to spew up 3 litres of blood.a reply to: RobinKuiper

No the incubation period is between 1 and 14 days.

There's still very few cases outside of China in the grand scheme of things, considering the amount of weeks this has been going on for now.

The hype around this is to draw attention while they cover up something else. We just don't know what it is yet.

There are currently 5,575 confirmed cases worldwide, including 131 fatalities. 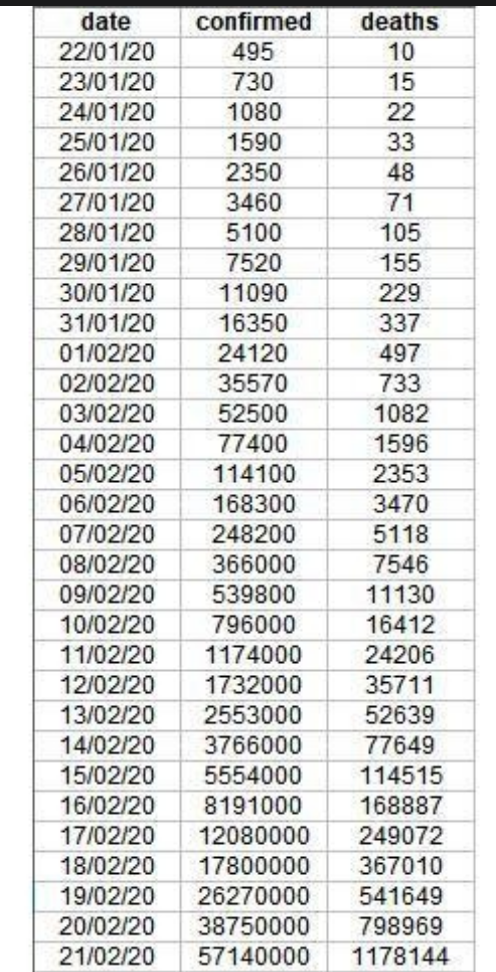 I'm guessing the estimated chart doesn't make very good reading after the 21st of February then. We need to see a drop off of figures pretty soon.

Update from the UK today-
British Airways has stopped all flights to mainland China.
The government announce they are quarantining all citizens who are being evacuated from China for 2 weeks-even though last week they admitted 2000 people flew in from China,and no one bothered to quarantine them(they are just being told to stay at home,but they are not being monitored as the government doesnt know who they are,just that there are 2000).

Indeed, you would hope they left them with "14 days" of food and water, but they are # out of luck if someone sets the building on fire.

Unless that is the plan

Major retailers are reacting to the escalating coronavirus outbreak by temporarily shutting outlets across China.

Coffee chain Starbucks is one of the most high-profile brands to take precautionary action. The firm has closed more than half of its roughly 4,300 stores.

A major hot-pot chain has temporarily shut all of its 600 stores until the end of this month. Another leading restaurant chain has taken similar measures.

Fast Retailing, the operator of Japanese casual clothing giant Uniqlo, has closed about 130 outlets. That's nearly 20 percent of its stores in China. Most of them are in Hubei Province, where the outbreak started.

The Lunar New Year holidays in China are typically a period of heavy spending.

But this year, growing panic about the spread of infections is expected to take a heavy toll on consumption.

So now Japan is on alert. I hope they stop ALL flights into Japan and the ships and ferries from South Korea also.

The Tokyo metropolitan government says two of the 200 or so Japanese people evacuated from China's Wuhan, the epicenter of the new coronavirus infections, have been diagnosed with pneumonia.

The Japanese government plans to transport about 650 Japanese who want to return from Wuhan to Japan by chartered plane. The first aircraft arrived at Tokyo's Haneda Airport on Wednesday morning.

The metropolitan government says that among the 206 people who arrived, five had symptoms, such as coughing and fever, and were taken to hospitals. It also says two of them, a man in his 40s and another in his 50s, were diagnosed with pneumonia. The five received tests to check whether they were infected with the new virus.

The rest were sent to the National Center for Global Health and Medicine. The health ministry says eight of them then showed symptoms of fever, coughing and headache. Seven of them will be hospitalized.

The health ministry is asking people with symptoms to remain hospitalized, and for those with no symptoms, to return home or stay at accommodation provided by the government.

The ministry is also calling on them not to go out for at least one week and to refrain from unnecessary outings in the following week.