posted on Apr, 16 2019 @ 10:20 AM
link
I think the figure looks exactly like a construction worker, including helmet.

ALso wow this thread is long; and normally I read the whole lot but I have a headache and can't right now. Has anyone yet mentioned the 'coincidence' of the I Pet Goat II, where it literally shows the towers toppling exactly as it happened in real life?
If so, can someone link me the page where this was discussed?
If not.
Well in Pet Goat II is a scene that totally/seemingly 'predicts' the exact way of the how the tower falls:
www.youtube.com...

Don't want to clutter the thread with stuff that has already been posted. So ignore if already discussed [but do let me know where if you happen to remember the page number, thanks]

Exactly as it happened? Thats not true is it?

originally posted by: loam
a reply to: Creep Thumper

Fox disgusts me now. As far as I know there is no network covering the right anymore.


originally posted by: loam
a reply to: Creep Thumper


Fox disgusts me now. As far as I know there is no network covering the right anymore.

Fox disgusts you for not trying to connect unrelated things to this fire until a connection is made? So you want an echo chamber network that makes wild speculation about things that have no confirmation... it sounds like you want CNN.

originally posted by: Mover3
a reply to: Sillyolme

Exactly. The Minster in my home town looks far better post fire reconstruction and that was a snip at £2.5 million. Notre Dame will be amazing when it is rebuilt, especially considering they are already at €400 million from 3 donations alone.

Here is the thread on the I Pet Goat 2 angle.

If I was a nefarious character and I wanted to quell any opposition I'd offer to donate £1bn if I knew the structural assessments would say it has to be demolished.

That's a stretch. The Library of Alexandria was of much greater significance than Notre Dame.

So just ignore the fact that he was a member of the Socialist Party before he switched to a more favorable party so that he could run for office? It's not about getting hung up on labels though, it's about what is his ideology, what is his political philosophy, what has he allowed to occur while he is in office. Those are the questions that need looking at.

Why did he withhold funds from the grossly reduced amount needed for the restoration project, what is his angle on provoking the French people with his handling of the refugee crisis, how does his policies damage the French people, those should be evaluated against this event. He pushes a Trotskyist ideology so why should we not call him out on it?

originally posted by: midnightstar
they may rebuild it but it will never be the same building .
Almost on par with the library of Alexandria .


Too bad that all those ancient texts, books and cultures that were burnt by christian missionaries can't be just rebuilt...

A perfect example of American cold-war paranoia, everyone is a communist in some form? Only communists are capable of bad things, because the West hasn't been destabilising the world for decades? Neo-liberals aren't communists.

originally posted by: Sillyolme
Right I keep forgetting I'm an idiot who only listens to fake news.


I'm proud of you Silly... it takes a real man (or woman) to admit something like that.


Now we need to work on your critical thinking skills.

Try this hint: for the same reasons they ignore or deflect on the numbers of rapes and assaults by Muslims on the local female populations.


They try hard to deflect, but those were too public and they couldn't just ignore them or lie about it.

But if there is plausible denailbility? Absolutely.

Why? Ok, I'll go ahead and say it. Because they're terrified of being labeled 'islamaphobic'.

posted on Apr, 16 2019 @ 01:09 PM
link
I haven't read much in this thread, so forgive me if this point has been made.
It seems to me this might be the perfect scenario where one (or group) would utilize time travel capabilities to quench the fire before it was damaging. If ever there might be a reason to delve into time change, preserving this site would be right up there in my opinion. So can we assume there is no such ability? Or is it only used by the nefarious?
Or perhaps this will become a Mandela effect...'I could've sworn I saw Norte Dame burn'.

posted on Apr, 16 2019 @ 01:36 PM
link
Meanwhile...Cincinnati Councilwoman Tamaya Dennard is making this about race. Talk about being embarrassed to have her be a community representative. 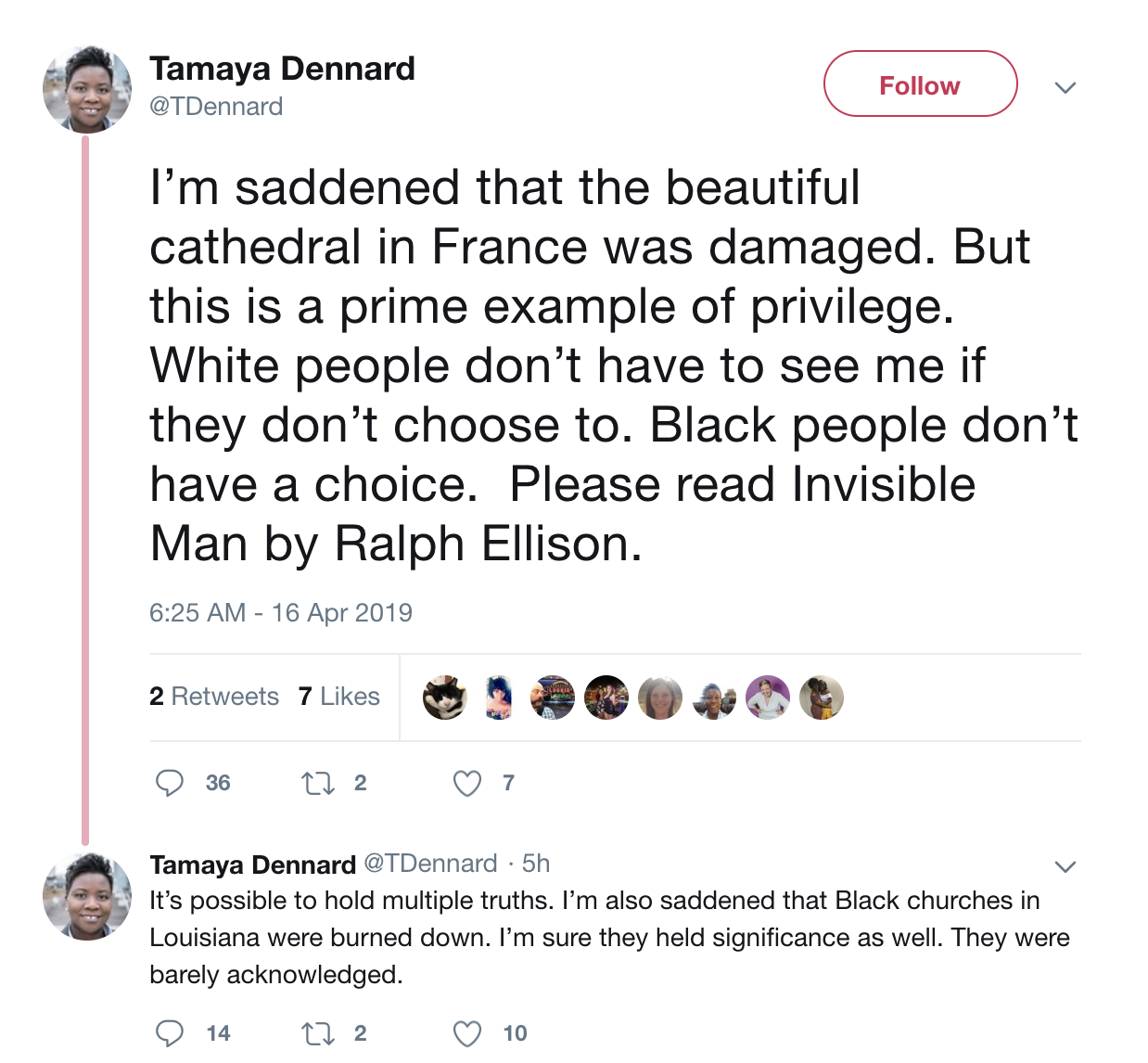 1. there was a relatively recent 'attempt' on Notre Dame by an ISIS terrorist
2. there have been several church arson and desecration incidents throughout France
3. Shep Smith of Fox news had a French elected official on for an interview and when he attempted to mention that several churches in france had been vandalized/arson recently he was IMMEDIATELY cut off...in the middle of stating facts. Apparently the same thing happened on another network.
4. the media seems dead set on MAKING sure this is not terror related, before ANY facts are in and regardless if it is or not.

I think the French government and French investigators are all saying that it was an accident as well. But I have heard no detailed explanation as to why they think that way.