The real question is, who cares?


I guess you care a bit as you started the thread.

The Wall Street Journal found that Mr. Trump was involved in or briefed on nearly every step of the agreements. He directed deals in phone calls and meetings with his self-described fixer, Michael Cohen, and others. The U.S. attorney’s office in Manhattan has gathered evidence of Mr. Trump’s participation in the transactions.

Paints a pretty dim picture of the President of the United States though. 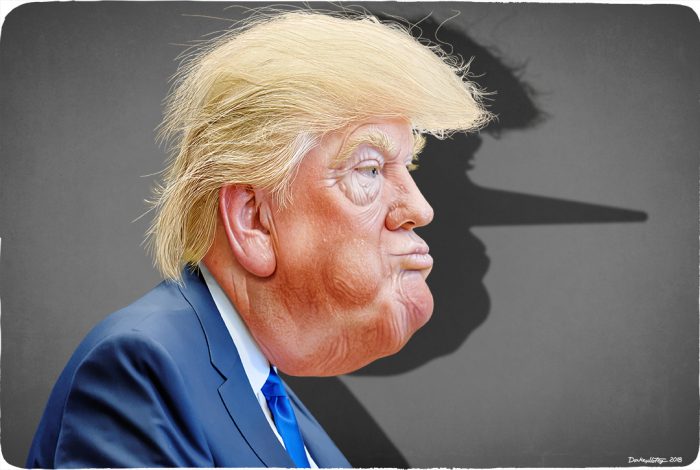 To cover up a story that is already fake? No I don't think so.


The real question is, who cares?


I guess you care a bit as you started the thread.


This is hilarious. Most of us are done sewing our wild oats by the time we reach thirty. Trump? He was still learning at age fifty? No Sixty. This was only ten to twelve years ago. What's he now seventy three? The case for arrested development gets stronger every day.

After Access Hollywood, the issue with the Miss Universe contestant,and the long list of women who came forward to accuse him of sexual abuse, he could not afford one more moral scandal. These guys may think this macho crap is all that and a bag of chips but the american people have higher standards than the locker room crowd and this could have been the straw that broke the camel's back. The reason for the back room payoff was to once again lie to the american people.
I believe that not only was trump aware of this but he consciously made the decision to hide it.
If he has a prenup with Melania I'd be very interested in what it says about infidelity on his part and what part that would play in his decision to cover up an affair because not only does he not have a problem lying to the american people he can just as easily lie to those he loves.

because that nonsense down in florida should be the lead story everywhere right?

originally posted by: JBurns
News is just breaking that Trump played a key role in payouts to several individuals who alleged they had a sexual relationship with him. Supposedly FEC has opened an investigation into the matter. Although I'm unsure how the President protecting his own personal reputation has anything to do with his Campaign, Inc. (which are separate People under the law)

As a presidential candidate in August 2015, Donald Trump huddled with a longtime friend, media executive David Pecker, in his cluttered 26th floor Trump Tower office and made a request.

What can you do to help my campaign? he asked, according to people familiar with the meeting.


Mr. Pecker, chief executive of American Media Inc., offered to use his National Enquirer tabloid to buy the silence of women if they tried to publicize alleged sexual encounters with Mr. Trump.

Less than a year later, Mr. Trump asked Mr. Pecker to quash the story of a former Playboy model who said they’d had an affair. Mr. Pecker’s company soon paid $150,000 to the model, Karen McDougal, to keep her from speaking publicly about it. Mr. Trump later thanked Mr. Pecker for the assistance.

The real question is, who cares?

Pretty much it is 100% certain that trump is guilty of this. That said nothing much will happen with it.

Who cares who he had sex with?

Just because neither you or I care who he had sex with does not mean that other people don't. Himself included.

No one cares who he #s. Y'all have that right. But that is not the issue here fellas. I know you all think that his sexual activity is the stuff of legends and are envious and all but this has nothing to do with any of that little business and everything to do with misappropriation of campaign funds.
Look up.... that's the point of the actions by the state flying right over y'alls heads.


Well, I couldn't get to the CNN site to verify but I did look at the Fox site. There is no mention at all about Trump or his people utilizing any campaign money to pay for that McDougalgal in the article, the one paid by enquirer. The head of the enquirer parent company looks like he paid it as a personal favor to his long time friend..Trump. When this came out here before it was hashed out and somewhat decided that no laws were broken in the deal. I suppose this makes Trump indebted to the guy, just as all campaign contributions create a indebtedness to the contributor if the person wins the election. If you can show me evidence that that money came as a campaign contribution I would be glad to believe your analysis of this event. But that still will not make me not respect the person residing in the office of the president of my country because of his position. I already know Trump is an overpowering jerk and somewhat of a womanizer, but he is good at running businesses and has been attempting to help this country...although the Republican plan is what I think will work, that is what Trump is mostly following. The Liberal Democrat created economic version we have been following for years brought us almost into an economic collapse, we need to stabalize our economy so our kids can experience a decent life, a consumer based economy cannot survive long, that has been proven over and over again in history.

It isn’t about the use of campaign donations like you’d normally receive from supporters and donors, it’s about the law that if something is given to the campaign for the benefit of the candidate/campaign during an election/campaign period, then it is considered to be a donation to the campaign and subject to campaign laws.

For example, if person x gives free office space to campaign y, it is considered to be a donation. And if someone pays hush money to keep a bad story from coming out about a candidate right before an election (especially something that happened over a decade prior), that is considered to be a donation to benefit the candidate/campaign. So that hush money is then subject to campaign finance laws.

originally posted by: OccamsRazor04
a reply to: AboveBoard

For me the real crime is the timing and reason of women coming forward with stories for pure political gain.

Hm. Well last I checked it wasn’t criminal to come forward and say you’d had an affair with someone.

It’s not super classy, but neither is screwing around on your wife just after your child is born. *shrug*

What IS a crime is hiding a campaign donation in the form of a hush money payout by wrapping it in shell companies and lying about it. The money used to pay off Stormy is considered a campaign donation because of the timing of the payment (right before the election as opposed to a decade ago) and the reason for it (to benefit Trump by preventing yet another unsavory scandal from popping up right after the Acess Hollywood tape. It was subject to campaign finance laws and reporting, which were violated.

originally posted by: AboveBoard
a reply to: rickymouse

It isn’t about the use of campaign donations like you’d normally receive from supporters and donors, it’s about the law that if something is given to the campaign for the benefit of the candidate/campaign during an election/campaign period, then it is considered to be a donation to the campaign and subject to campaign laws.

For example, if person x gives free office space to campaign y, it is considered to be a donation. And if someone pays hush money to keep a bad story from coming out about a candidate right before an election (especially something that happened over a decade prior), that is considered to be a donation to benefit the candidate/campaign. So that hush money is then subject to campaign finance laws.


It is only considered a campaign contribution if you list it as one and claim it as a tax deduction. I can give money to anyone I want, but they will have to claim it as income or in the case of politics, a contribution. I cannot deduct it unless I list it on my taxes as a donation to an approved charity or political group. If I had a Senator friend and gave him my truck to use for a while while he was campaigning, neither of us needs to call it a campaign contribution.

I know what you are trying to say but it has to be listed campaign contribution money used improperly to be illegal.