page: 1
53
<<   2  3  4 >>
log in
join
share:
ElectricUniverse
+28 more
posted on Nov, 1 2018 @ 10:28 AM
link
In 1984 "Public Law 99-2660-Nov. 14 1986 100 Stat. 3755" gave vaccine companies economic immunity from vaccine related lawsuits, which removed the incentive from vaccine makers to produce safe vaccines. Because of this Congress assigned HHS to make sure that vaccine companies could prove every 2 years that their vaccines have been properly tested for quality and safety. But it seems that for the past 32 years no vaccine company has conducted and produced such testing.

I am still trying to find a direct link to the lawsuit. There are a couple of videos in which Kennedy Jr. and Bigtree talk about this, and in one video they show the court documents proving their argument.

Here is the video in which they show the court documents attesting to the fact that vaccines have not been properly tested for safety for 32 years.

Here is another video in which Robert F. Kennedy explains all of it.

Below are some related links.

Why Kennedy Sued the Government Over Vaccine Safety & Won

Found a link to the settlement.

Here is a close up on the section of the settlement that shows that they could not find any such records for vaccine safety. 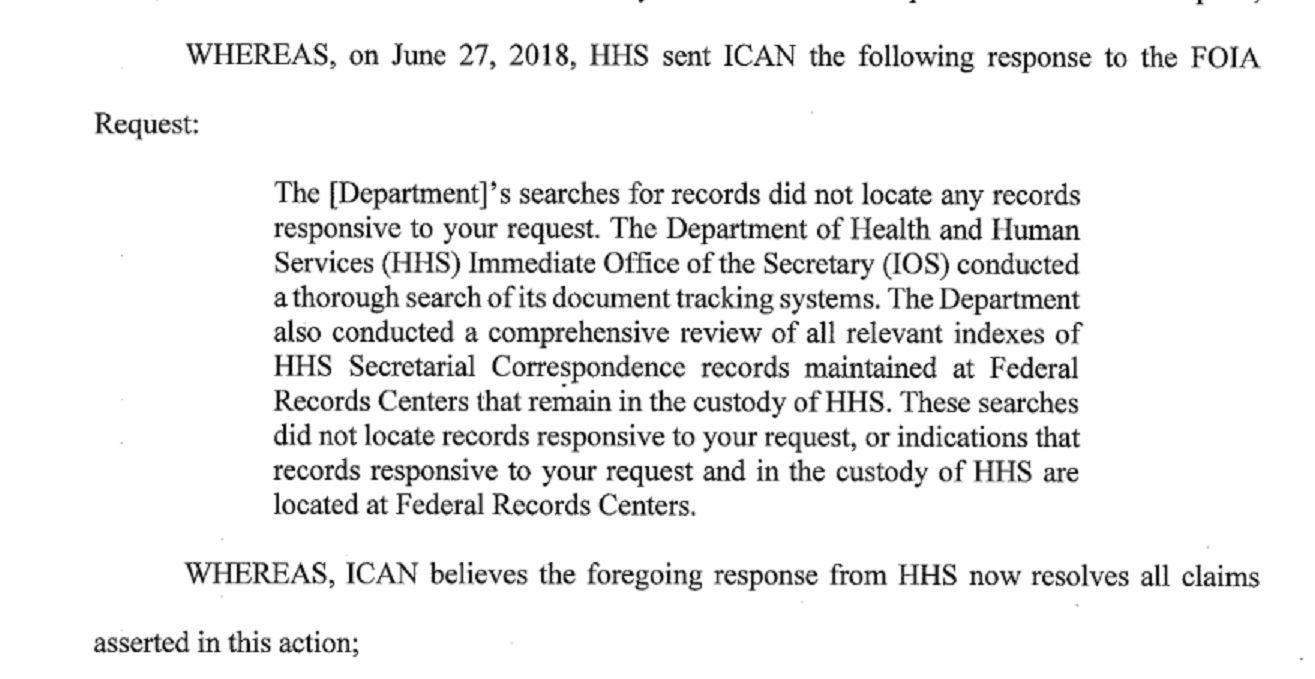 What exactly will happen next? We have been lied for the past 32 years about the safety of vaccines, and now there is proof of it.

The wonderful result here. The government has for years claimed vaccines are so safe and the stats show different

verschickter
+3 more
posted on Nov, 1 2018 @ 10:40 AM
link
Just imagine what would happen if they found to be liable for some disorders. The court system would implode, the government won´t allow that to happen.

Those companies would be in red numbers very soon. Imagine they would have to come up for all the medical expenses for a whole life + then some) * number of people affected.

Greedy bastards, all the time you are told vaccines are safe. If you think otherwhise or dare to ask questions you´re a paranoid looner.

AndyFromMichigan
+9 more
posted on Nov, 1 2018 @ 10:44 AM
link
Sounds to me like the government has been perpetrating a massive fraud: they've told us for decades that vaccines are safe, but as far as anyone can tell, nobody has ever actually conducted the mandated studies.

Every time I refuse a flu shot from the doc I get the 'look', she then shakes her head and says ok. I can see a time when the government, who hasn't done the work to make sure vaccines are safe, will make it illegal to refuse their vaccines.

posted on Nov, 1 2018 @ 11:08 AM
link
Nothing is safe, but vaccine have saved millions, probably billions of lives. The impact of the flu alone per year is incredibly expensive, especially in the elderly and the immunocompromized.

My question is why would the US government introduce a law to give economic immunity to vaccine makers in the first place? This is what happens in a system where corporate lobbyists get to influence policy. Either that, or there’s an even bigger conspiracy at play..

are those the only vaccines that are made ?


I believe those were from the days when they did test things well before they were used on people.
edit on 1-11-2018 by SeaWorthy because: (no reason given)

originally posted by: strongfp
a reply to: Dr UAE

Don´t move the goal post, this thread is not about the question if vaccination works or not.

originally posted by: avgguy
Nothing is safe, but vaccine have saved millions, probably billions of lives. The impact of the flu alone per year is incredibly expensive, especially in the elderly and the immunocompromized.

How do we know this? Who gives us the numbers?What if the flu shots did contain something more? how would we know? Why would anyone trust the governments we have now?


"National record keeping is not precise enough in tracking illness, vaccination, and influenza diagnosis in the individual patient," he says. "We have not been able to show a mortality impact with vaccination, and that has been a source of frustration."

My grandmother was given the flu shot in the nursing home after they were told not to and she died-of the flu. Two weeks after getting the shot.

nobody here is questioning that...what we are here questioning is the safety of giving 28 shots to newborn humans who don't have a single fully developed biological system in their bodies. we were told by the government that it was/is fine, clearly they were talking out if their collective asses. that is entirely above and beyond the question of if they work...

polio was given away for free for the benefit of humanity. all the others are patented for maximum profit. also polio (1955) and smallpox (1972) would be well before HHS took over safety regs. 32 years ago (1986)..which i think its worth noting that Autism started increasing around 1993...about 6 years AFTER that happened.... weird

that link also states that "ut that prevalence has actually declined between 2000 and 2010 (3,4)." which ironically enough coincides with that evil antivaxxer movement.

The flu vaccine is a live virus vaccine.

People getting unnecessary flu shots dramatically increases the rate of mutation in the flu virus resulting in a myriad of strains every year and a need to determine which strain will be the most prevalent.

Live-virus vaccines have always been the problem because they're the ones that need the adjuvants to help weaken the virus as well as being the only ones that can mutate.


No it isn't. Just because an idea from the 1790's worked a few times, doesn't mean it will work every time. ALL new vaccines should undergo rigorous and transparent testing before being unleashed on the public.


According to a recent study by Johns Hopkins, more than 250,000 people in the United States die every year because of medical mistakes, making it the third leading cause of death after heart disease and cancer.


Article
Though we should be thankful for the leaps and bounds made in medical science, they are not infallible, especially when you have a trillion dollar pharmaceutical industry behind them that cares more about perpetuity than peoples lives.
edit on 11/1/2018 by Klassified because: Because the cat walked across my keyboard

My problem is not whether vaccines work or not, it is that they are largely involuntary, and it is very very difficult to opt out of the system.

For instance, my school age kids have zero choice, and as a parent I don't have a choice either, if I want my kids to be in public school.

So, they are involuntary, and now not even tested for safety as mandated by law?

THAT is a load of crap!

Thanks for posting. Ill be sharing with my family. We use discretion choosing which vaccines our kid receives and when.

My wife has to get the flu vaccine because she is a nurse. My son and I never get it and have never had issues. Just saying.

posted on Nov, 1 2018 @ 12:43 PM
link
Now Autism stats will be down and child mortality will be up, enjoy your mumps,measles,small pox,HPV, and polio you guys earned it.