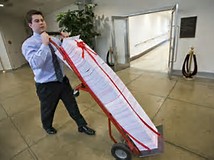 So Michell is a fav for the top dog in the 2020 election for the Dems? Must have been the bang up job on school lunches.
Anyway, she beats out touchy feely Biden, but he's best left with his age own group anyway. She also seems to knock Sanders in some very important areas.


Get out of the way Bernie, Joe, Elizabeth and Kamala. Democrats want former first lady Michelle Obama as their 2020 nominee.

According to a new Zogby Analytics survey provided to Secrets, Obama is at the top of the list of Democratic choices with 22 percent support, a huge sign of support for somebody who has never run for office.

The other choices are Waren and Zuckerburg. We are doomed.


But remember that Hillary was going to pound Trump but good in the 2016 election. Well at least that is what the polls said. But this may give some indication of the Dems and the absolute mess they are in.
The repubs are too busy trying to under cut Trump so they are also in full can't find ass with a bell on it mode. The political system is indeed in full disarray.

jjkenobi
+1 more
posted on Oct, 31 2017 @ 10:04 AM
link
That is an abysmal list of potential nominees. They might as well wheel Hillary up there again.

The political system is indeed in full disarray.

The US political system is the single biggest threat to National Security in the US, that and the Debt bomb.

The former first lady who said, "For the first time in my adult life, I am really proud of my country because it feels like hope is finally making a comeback," will bring out voters that ole pantsuit could not.
And the former first lady is not a career politician.
I think she would be a formidable foe.

God please no... one Obama was enough

Call it what you will, it is this way because it is the way "they" want it.

.. said in your best Russian accent.

Very true, the Elites prosper while the mindless meat suits that are the US public stew in their own juices even as the temperature is slowly raised.

IgnoranceIsntBlisss
+2 more
posted on Oct, 31 2017 @ 10:11 AM
link
Royal dynasty groupies, Obama didnt take your party and ideology down to the rock bottom yet in your view, nor did trying to elect the wife of another disgrace of a sellout corporate fascist POTUS, well alrighty then.

You best be careful about talking about how the Dems don't have a chance because the party is in disorder. That was the EXACT, same thing Dems were saying about Republicans during the Obama years. Then Trump took the reigns and the Presidency.

Yep, exporting of good jobs is a great idea.

Yep, back and forth between govt and business is good (example Clearance Thomas)

She'd be a disaster as president, but seeing how many people absolutely hate her and her husband's guts I wouldn't be surprised if she won on that fact alone. We think the division is bad now? Michele Obama might be the nail in the coffin if it isn't Trump.

Sad part is they would win by a landslide
edit on 31-10-2017 by Jimmycrackerson3 because: (no reason given)

posted on Oct, 31 2017 @ 10:15 AM
link
I highly doubt she'll have a chance. White people are racists, they voted in trump. They'll never elect a black president, they're all racists. Not to mention the patriarchy and misogyny, white supremacy, nazi's , etc.

She could never do it. I'd give her a 3 percent chance in the polls. And that's like basically impossible.

I wanted to see a Bernie/Trump face off.

But Sanders was dumb enough to go against the Clinton Machine.