Yeah she condemns him now though - he's a sexist pig. Anything Bill Clinton did though - that was in the past... 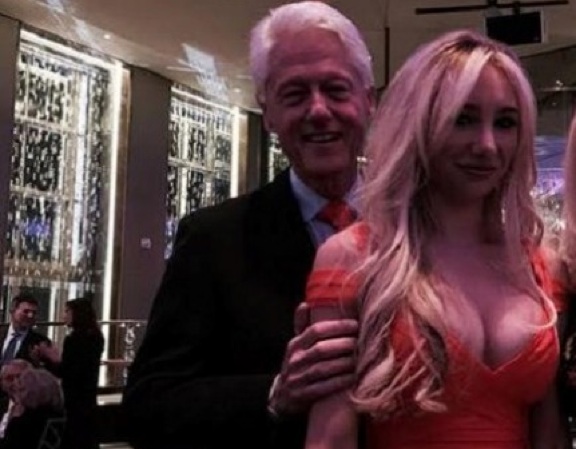 posted on Oct, 31 2017 @ 03:15 PM
link
Just what we need in US right now--a racist who despises white people and the country. As a former democrat, I have to say that the Obama's extreme incompetence and narcissism makes Trump look better all the time.

originally posted by: Steak
Amazing how little is left in the democratic party - I believe most are scared to run as skeletons always creep out of the closet. Just ask Harvey Weinstein - the latest liberal scum bag to be exposed.

Wouldn't that honor go to Spacey?

posted on Oct, 31 2017 @ 08:56 PM
link
Yes, the first woman who REFUSED to put her hand over her heart during ANYTHING patriotic...of course these millennial, snow flake, @ss hats LOVE anything that is disrespectful and controversial. So extreme man! Screw America! She's righteous! (But not in a good religious way...that would be lame!)


originally posted by: cinerama
seeing how most hated obama for his colour, having a black female president would be like trolling 101.


The sad part is that you probably believe that.

Look at this thread.

There are multiple people who call Michelle Obama a man.

It's insane. It is madness.

The only thing crazier is the fact that anyone is even flirting with the idea that Michelle Obama, who absolutely hates politics and pleaded with her husband to get an honest job, would ever in a million years run for President.
edit on 21Tue, 31 Oct 2017 21:33:04 -0500America/ChicagovAmerica/Chicago10 by Greven because: (no reason given)

originally posted by: jjkenobi
That is an abysmal list of potential nominees. They might as well wheel Hillary up there again.

The Dems will ignore possibilities that are much younger, will appeal to a much broader cross section, like Tulsi Gabbard, who I really like, even if she is a bit left of me.

Nope, lets run a retread, a billionaire who is so out of touch with reality it amazes even me (No, I don't mean Trump), Terry McAuliff (most of America is asking "Who?"), and a former first lady (stop me if you've heard this before...don't they have to run for the Senate from NY, first?).

I mean, just because Gabbard dared to support her own choice for the candidacy, and stepped down from her position in the DNC before campaigning for him (Gee, what a concept, avoiding a conflict of interest...). Add to that, the old guard in the Democratic party hate her...which is a bonus, so far as I'm concerned.

If you don't know about this lady, read the link in my signature. I may not agree with everything she says, but I agree with enough to work with the rest.

No one mentioned in the OP is a better choice than Gabbard, not a single one of them.

You know it. In one year he has outperformed the last several Presidents. Even in the face of unfair, biased, snowflake media attacks. He is for Amerca and too strong to be pushed around or cower to what negativity that may be thrown his way over making what he considers to be the right decisions. I wonder how long it is going to take the hillary (not capitalized on purpose) crowd to concede that she was a bad choice for president, based on her legitimate criminal transgressions that go way deeper than talking to a Russian.

originally posted by: Zoyd23
Just what we need in US right now--a racist who despises white people and the country. As a former democrat, I have to say that the Obama's extreme incompetence and narcissism makes Trump look better all the time.


That's the thing. I hate Obama because:
1) He openly lied about Obamacare, telling us how wonderful it would be, when it's obvious now (and was obvious then, really) that it's a terrible law whose primary purpose was to destroy the healthcare system in our country.

2) He was weak in foreign policy, seemingly always putting America's interests behind every other nation's.

3) He did his best to ignore Islamic terrorism, only conceding that it exists at all when absolutely necessary, and never did much to fight it.

4) He was a race-bater who exacerbated racial tensions. If he wasn't anti-white himself, he certainly hung around with that crowd. (Remember the early controversy about his pastor in Chicago?)

5) His narcissistic personality was obnoxious. It's obvious that he enjoyed being a celebrity and getting to hobnob with the Hollywood crowd (and many of those same people are now being unmasked as a bunch of molesters, rapists, and pedos).

Love the sound of that.

posted on Nov, 1 2017 @ 09:22 PM
link
I think what the people of the USA have witnessed since Trump became president is that this country was in desperate need of someone that actually understands business, money, and people. No one stands a chance against him unless he does something super stupid.

And Michelle, while I have nothing against the women, you don't all of a sudden get to be a leader of a country simply because you were married to one. That's what has been wrong with this county for so long, a popularity contest just like prom king and queens in high school. See what happens when you get someone actually qualified for the job? Trump is killing it on so many levels it's crazy. Yah, he tweets. Who cares, just keep Americans working and able to support their families.

posted on Nov, 2 2017 @ 05:12 AM
link
No Michelle no!! Personally I respect you, but pls Noo more dynasties, Burney or Nina Turner or both, real change with new ideas and ppl, establishment Dems can take a seat.

He was a race baiter??? Because he said Trayvon Martin could look like his son???..or was it the Beer summit between him, Professor Gates (a personal of his) who was irate about getting lockup trying to get into his own home and a cop who didn't believed he lived there.
Foreign policy?? He had more respect from most of his contemporary state men, than his replacement, who is regarded as a pitiful joke.
Race baiter look at your current .POTUS.. My God who ever thought we would have new Nazis in the whitehouse.

His failings and there were many included making the Bush tax cuts for the extremely wealthy permanent, he killed waaay too many ppl with his drones, and he furthered the police state.
edit on 2-11-2017 by Spider879 because: (no reason given)

No Obama's, Clinton's or Bushes, ever again. Or we could just go full on monarchy...

Michelle Obama received a "Promise to Counter" envelope/notice at the George H.W. Bush Funeral too!

The lady is too intelligent, too smart, too bright and most of all… too Human ! I just hope she doesn’t run for it, as it is the most evil and disgusting job on the planet, being the U.S president.

If ever! We’ve got the Killary , itching for this sort of crap!